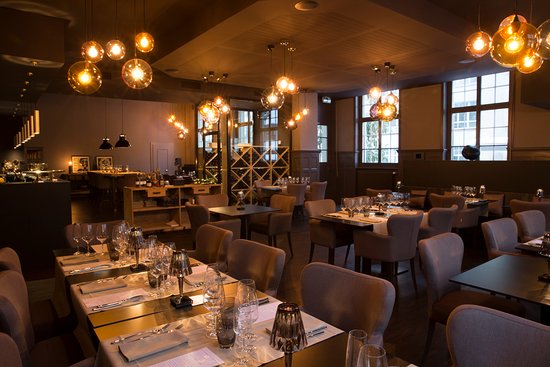 It is a pretty new place and very nicely done. Staff was very is nice, the only problem was that they speak and understand only French, which made it difficult. The salad and soup were nice, served with really fresh bread and even a special tomato bread, but the main course then was really out of place. We almost couldn't eat it, plus it did not really contain any side dish. My husband got a plate of cold roastbeef simply served with small portions of an indefinable mousse, and my chicken wings had such a strange taste that had nothing to do with sweet and sour and were accompanied by some grated carrots and cabbage - no sauce. It could hardly be called a main course. It's a shame for such a nice place, but it's not worth the moey.Dear customer,We are glad that you enjoyed our establishment and our staff.We are sorry that our culinary offer was not up to your expectations, we take into consideration your remarks.Hope to see you again soon for a new experience.

We have eaten in this restaurant once or twice a year for several years and have usually been very pleased with the daily menu (menu du jour). However, this year we were more than disappointied. The wide pasta was enevenly cooked and generally overcookedâ-inexcusable for an Italian restaurant! The sauce was unrefined and one could have done better with a prepared product at the supermarket. Tha daily special should be very good for 18.50 Swiss Frances(about $19) and the staff should be aware that their offering was less than mediocre!

Food was very tasty. Large portion too. Pricing seemed average for Swiss. Nice to be able to sit outside on a warm evening, 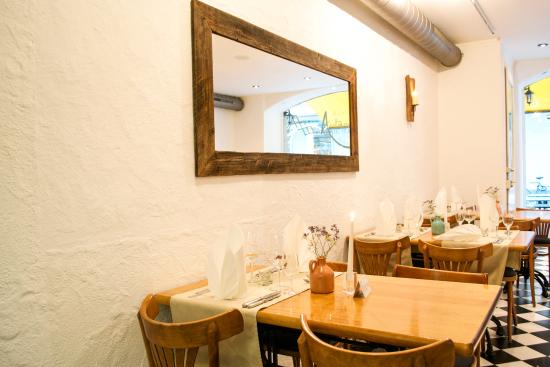 A romantic (small = intimate) restaurant with excellent food and wine. The service is impeccable - good advice for the wine and very quick and discreet. The lunch menus are good value and service is fast. This place is well worth a visit, for lunch or dinner. 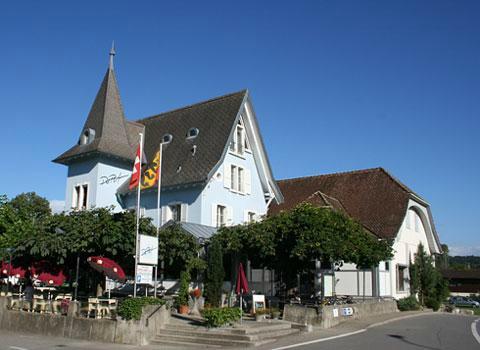 On a hot summer day I stopped there for a coffee break.The restaurant is conveniently located near the harbour and a 10-minute walk from Erlach bus station.The terrace is nice. However food and service are quite average. The Coupe Hechtebucht ice-cream was generous in quantity but rather tasteless.The waiter was friendly. But as I mentioned that he had forgotten the coffee on the bill, he just added the amount orally - but WITHOUT issuing a new cashier receipt. A bit "strange". Good:Location, the township of Aarberg is worthwhile every visit, and this restaurant lies directly at the beautiful market place. In Summer you find a nice place outside.Meals, I had the 'Mittagstisch' and got a delicious dish, prepared in a creative, tasty style. Typical Swiss kitchen served a modern way. A compliment to the cook!Service was friendly and professional.For this kind of excellent meal, the pricing was decent (as decent Swiss restaurant prices can be).Ok:It was noisy on the market place. Someone steam-cleaned the neighbor restaurant during a Saturday afternoon, compromising my enjoyment - most likely a unique action.To be improved:Nothing of relevance 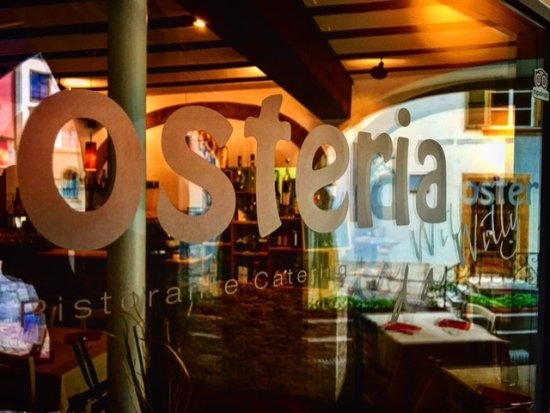 Not that many tables, but what you lose in size you win in taste. Very good example of an Italian kitchen. Good and friendly service. Maybe a bit costly

Where to eat Italian food in Twann: The Best Restaurants and Bars 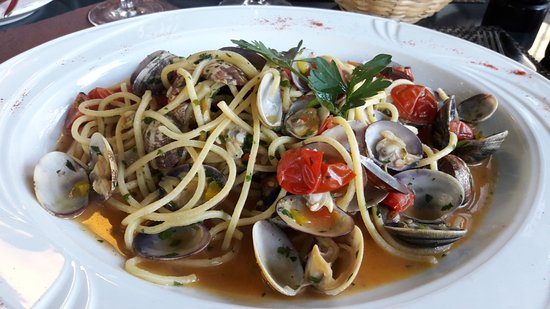 I have been in this Italian restaurant with my family and with a pleasant surprise I have eaten a wonderful seafood pasta and fritto misto.Sure I will come again. 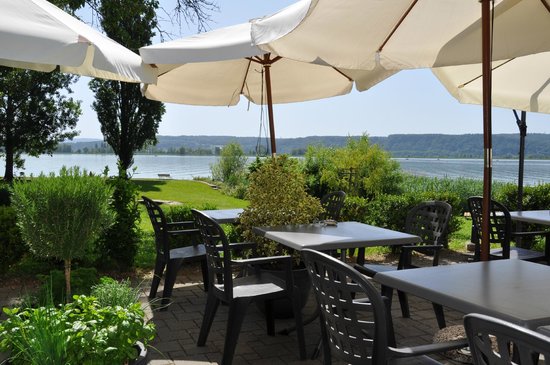 Situated by the lake of Bienne, on the most beautiful beach of the region, this bistronomique restaurant and its magnificent terrace are a welcoming, friendly, and cosi place, where local people as well as tourists spend a pleasant moment.

We selected Le Nenuphar from Trip Advisor. We parked our car at La Neuveville station and walked for 15 minutes along the shore of the beautiful Lake Biel, to work up an appetite. We arrived without a reservation, but were immediately shown to a table adjacent to the bar.We were asked if we wanted an apertitif. We said yes and were given a choice of wines, from which to choose, but only wine. We selected three glasses of local wine from La Neuveville. The waitress brought our glasses of wine, but took away the water glasses. We had no water before or during the meal - and I developed a splitting headache through dehydration. I would expect a restaurant of this quality to serve water.The waitress was suffering from an overload of nervous energy. She flitted constantly around the restaurant, adjusting seats, rearranging empty tables, changing the table settings, lighting candles, replacing glasses and making changes behind the bar. My companion observed that she must be exhausted, when she finishes work for the evening. BUT she seemed blissfully unaware of her customers. We were very hungry and had been drinking wine on empty stomachs. Our wine glasses had long been emptied. The restaurant was empty at this stage, yet we spent more than 15 exhausting minutes, trying to catch her attention. Eventually she saw me waving at her and came over. I underlined that we were VERY hungry. She brought over the specials blackboard. I expressed surprise that there were only three dishes to choose from and she reluctantly produced a printed menu. The entrees consisted only of three salads, so we decided to move straight to main courses. We ordered a bottle of wine with our meal, which was produced immediately. The waitress poured the wine, without inviting us to taste it first. We were again drinking on empty stomachs.Meanwhile a large group was assembling by the bar, drinking glasses of wine before taking their table.. They were noisy and moving around, towering over us, as we were seated at our table. I felt overlooked and unnerved by the constant shuffling behind my back. The remaining tables of the restaurant were empty.At last our food was served. By now I had a splitting headache, caused partly by drinking on an empty stomach, partly by lack of water and partly by the noisy crowd thronging behind my chair. I nearly asked the waitress if we could move tables - I should have done.The food was exquisite. We had three different meals and everyone reported delicate and mouth-watering flavours. By now, however, I was so ravenous and so distressed, that I was unable to enjoy the food. I bolted down the food.The noisy crowd behind me thankfully had sat down at a table across the other side of the restaurant and it was peaceful. The waitress brought us the dessert menu. We chose desserts and were talking about coffee. But another crowd began gathering at the bar behind my chair and the waitress was now rearranging the tables and seats immediately to the left of us. When the waitress came to ask for our dessert choices, we declined desserts and coffees and fled the restaurant.Stressed, distressed and with a pounding head, I walked back 15 minutes along the shore of the lake to the station car park. The walk was very calming; beautiful lights flickered across the smooth surface of the lake from the villages opposite. We went into the station cafe and drank coffees. The manager greeted us with pleasant and reassuring banter; then we sat comfortably and peacefully and drank our coffees.We spent CHF 152 on 3 glasses of wine, 3 main courses and a bottle of wine. The exquisite food, beautifully presented, justified the prices. But at these prices, I expected the waiting staff to treat me with respect and consideration. I don't expect to be sent out of a restaurant with nerves a-jangle and a splitting headache, after paying these prices. I feel sorry for the chef, who was so let down by his colleagues. 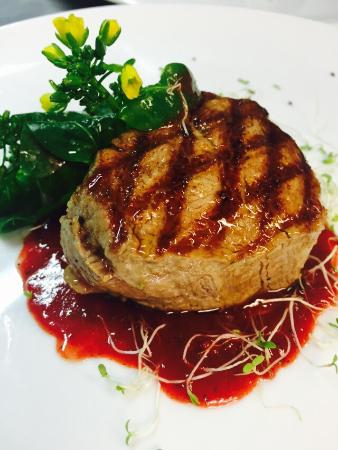 I booked the night before and when we arrived were shown to the terrace in the sunshine. The service was friendly and caring. We had bread with mushrooms in olive oil which was good. Then very fresh salads and followed with the Italian lemon chicken with spinach and saffron rice. The chicken was ten out of ten !A few problems seemed to be happening with another large table with slow service but my guess was the customers were too fussy !We will go again happily.

Where to eat European food in Twann: The Best Restaurants and Bars