Find out what Thai restaurants to try in Byron Bay. Byron Bay's beaches are dotted with lighthouses and surrounded by bottlenose dolphins, rays, whales and sea turtles. This former New South Wales whaling station turned tourist town is still strongly influenced by its recent bohemian past, when hippie lifestyles flourished. Bongos and didgeridoos sound in parks, sarongs and dreadlocks are common, and vegetarian restaurants abound. Give in to the casual vibe and stroll between beaches and bars for a low-key and happy day.
Things to do in Byron Bay 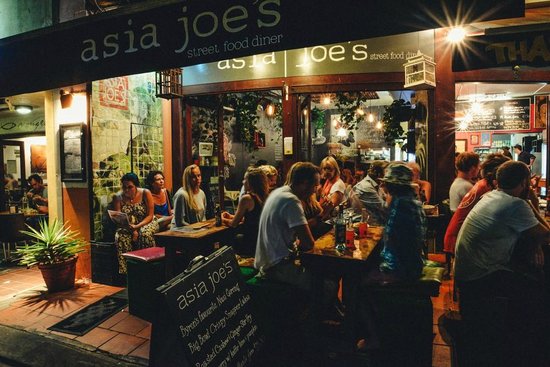 Picked this for dinner last night when holidaying In Byron my husband found it down the lane way. Friendly welcoming staff and a great menu to choose from. Kids loved it and devoured every bit of their meals. My salad was fresh and tasty, probably one of the best Iâve had. We will be back! 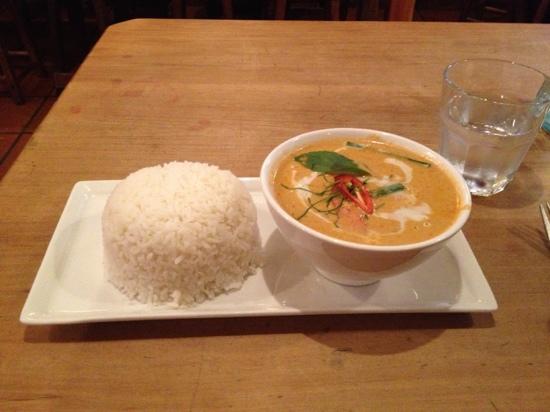 We ordered takeaway and chose two curries and a stir-fry. I love Massaman Curry - but have never had one with the flavour of burnt wood before! It was close to inedible. The red duck curry was okay and stir-fry was good but it did not impress... 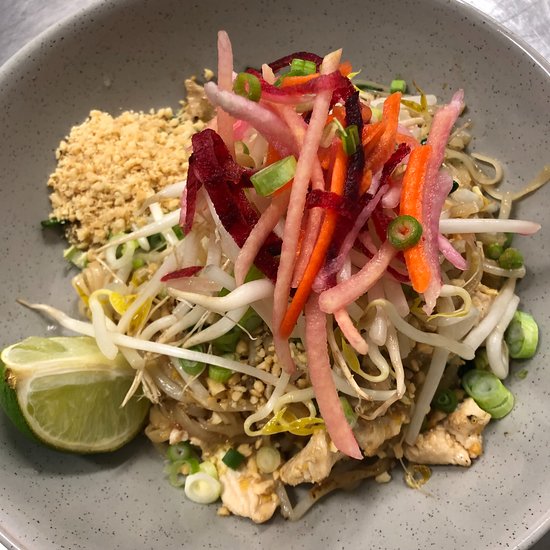 Success Thai presents food attractively and is inexpensive eg seafood dishes are $19 and other options are cheaper. Entrees, mains and desserts are available.I tasted a chicken sate entree which was a generous size and came with an attractive rainbow Thai garnish.My seafood laksa lacked lustre but was okay. Best was the variety and amount of delicious fresh vegetables in this dish. I love vegetables. The mussels (2) were plump and delicious, the fish pieces (2) were brought separately so that the crispy exterior didnât go soggy, the calamari (2 small pieces) was okay and the prawns (2) were ordinary, possibly frozen as they lacked flavour. The liquid was thin and watery rather than thick textured (which meant less coconut milk/cream which was better for my heart and weight if not my taste!) and a little too sweet for me. Iâve had this dish at this restaurant in the past when it was in its previous location and thought it a bit better then but I suspect that the prawns were frozen then too.Due to the freshness, vegetables and pricing, Iâll try it again and Iâll try a different dish. 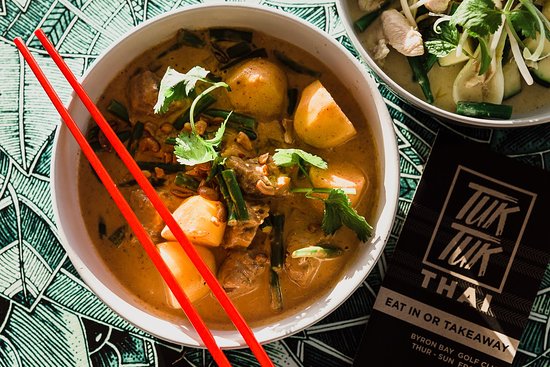 Fresh delicious Thai food with menu options for the kids with easy access, and easy parking in the beautiful surrounds of the Byron Bay Golf Club where all are welcome.

Well, there have been some low points in dining in our many trips to Byron Bay, but this really takes the prize for the worst we can remember. I spent some time writing a witty and thoughtful review, to try to make light of the experience, but in the end I decided to stick to the facts so that others may learn quickly how important it is to stay away. So here are the bullet points:-- our booking was for two families, four adults and three children, midweek, at 7pm- no-one met us on arrival, The Chef eventually hailed The Manager, who took us to our table.- the view from the eponymous Deck is indeed magnificent, but our table was about as far as possible from it. About 15 empty tables sat between us and the view throughout the evening. We noted that all other bookings were similarly far away from the view, but close to the kitchen, presumably for the staff's convenience.- The Manager could only find one menu for all seven of us, and she couldn't remember either of the specials. She promised to find out for us - and she didn't - but also added that it would be easier if we just checked the boards ourselves - and it was. Tandoori Pizza and Lasagne. Very original.- The remainder of the menu was the dismally familiar standard pub fare - Nameless Fish and Chips, Nameless Steak and Nameless Pizza, and the ever-present Chicken Parma. The only bright light was a salmon dish which two of our party ordered.- The counter where we ordered still contained the dismal remnants of cling-wrapped sandwiches and rolls from lunch, a sign of incipient laziness. On the other side of the counter was a pile of used dishes which didn't move the entire time we were there, another of many lazy touches. A broken TV leaning against the wall of the dining room rounded out the air of uncaring decay.- On ordering, we were warned that our meals wold be 40 minutes away. Incredulous, we conferred amongst ourselves as to whether we should move on.STOP THE CLOCK!! Right here is where we should indeed have found somewhere else to eat, with enough loud warning bells clanging in our ears, but herein also lies the only reason a place as hopeless as The Deck can survive. There is NOWHERE within probably 10-15 minutes' drive which offers dinner. We were already stuck with three hungry and tired children, and our only option would have been to drive in to town, park, get seats somewhere, and start again. In fact, no, not the only option - we could have gone back to our cabin and eaten cornflakes and muesli bars - a dining experience which would have been a genuine improvement on the one we subsequently had. Anyway...- we asked why there was such a wait for food, when the restaurant was clearly close to empty. We had only seen two other tables - maybe 10 people in total - order while we were there. The Manager testily replied that it HAD BEEN busy earlier, and that's why we had to wait. No logic there, but inertia had set in on all sides, and we foolishly went ahead and ordered.- Two steaks, two salmons, and three kids meals were ordered, and paid for ON TWO CREDIT CARDS. This detail becomes important later on.- The Manager promised that our childrens' meals would be ready in 20 minutes. Mmm-hmm.- 55 minutes passed. As in, nearly one hour, for the simplest of counter meals.- in that time The Manager brought out one credit card receipt which showed that she had only charged 61 cents for one family, not 61 dollars, and could someone please come and pay the proper amount. This done, we all continued to wait.- Also in that time, The Manager brought us meals for other tables - twice - and twice she asked US if WE had made a mistake in our ordering. - The meals came out over a 10-minute period (HOW HARD IS IT? HOW HARD?), minus one of the salmon dishes for the adults. This we brought to The Manager's attention, to which she testily advised us "It's coming!!"- when the second salmon did arrive, nearly 15 minutes after the first meals, The Manager brought out our order slip to show that though we had ordered two salmon dishes, only one had been paid for.- We were all fuming at this point, and I nearly made a scene at how she had had not one but two opportunities to get the order and payment right, but I demurred, in the interests of not scaring the children.- Unhesitatingly, the person whose meal was supposedly not paid for - the person who had now been twice to settle the bill - asked for the untouched meal to be taken away. The Manager was immediately shaken that her bluff had been called, and flustered and reeling, asked why someone would waste such a nice meal.- our man firmly stood his ground and insisted on it being taken away, at which The Manager haltingly changed her mind, and conceded the house's error and that he could keep the meal if he wanted. He politely ate the meal.- the food itself was adequate. I can say no more.- as each meal was finished, The Manager swooped in and scooped up the used plate, a practice universally acknowledged as unprofessional and rude. Just wait, OK, just wait until everyone is done, then clear it all at once. Really, really simple hospitality. - The Manager chirpily asked at each occasion how each of us had enjoyed our meal, but all of us - even the children - were too fatigued by our experience to answer.- we made our exit as hastily as we could, the better to avoid venting our dismay at The Manager on our way out. All for the best, really.