10 Things to Do in Deggendorf That You Shouldn't Miss

Deggendorf in Germany, from Europe region, is best know for Historic Sites. Discover best things to do in Deggendorf with beautiful photos and great reviews from traveller around the world here!
Restaurants in Deggendorf 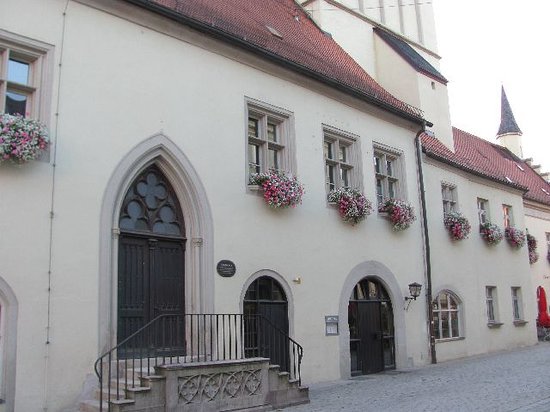 Around this former Town Hall a daily market which starts as early as 8 o'clock. It also houses a brasserie to eat and drink. Its 14th century tower is one of 3 complexes in which the Town Hall is split (oldest part Northern construction, the former Martinskapelle, desecrated 1803 but its Flèche reminds that is had been a chapel). Belfort west side of the entrance: 54 metres high tower via a narrow spiral staircase, seven floors. After climbing the 50 granite steps of the construction one lands in its actual town hall tower, in the 2nd floor machinery of the clock tower: the massive transmission was untill 1866 moved by granite stones, its pendulum is 3 m long, 1974 engine on 3rd floor, replaced by an electrical system (clock with hammer 6th floor). On 4th floor insert, then 129 stairs of the former Tower House, inhabited until 1923. It had two rooms, kitchen and a stove to burn wood, water and food were daily drawn up: in 1919 the pay for this labour was 19.33 mark per month. The Tower watchman had to blow two pieces in all four directions daily at 11’o clock, each Sunday and on public holidays, during weekly- and annual markets, “Kermesse” and fasting time. The sixth floor was the “safety zone”: from that spot the Tower watchman had to check the night watch who had to yell every hour. He was also responsible for fire and lightning, in case of fire he ushered the fire bells: by day a red flag towars the fire-direction and at night a Red Lantern. If the Danube was ice-free again he blew the trumpet, as well as at the arrival of the first grain at harvest time when it was brought within the city walls, as well as in times of war he had to observ the troops. The Martinsbell which we see here was casted in 1590 and is one of the oldest bells in the city. After climbing a total of 165 stairs one reaches the 7th floor, at the height of the outer dials, through the window one can enjoy a breathtaking view. Southward the actual City Hall, built in 1535. Sundial, Gothic solar facades and cornices, arms of the Bavarian districts, mythical creatures and grimaces around the window posts. The two stone balls attached to the chains at the south facade was a late medieval punishment instrument (pillory), according to its legend also called "Deggendorfer dumplings". 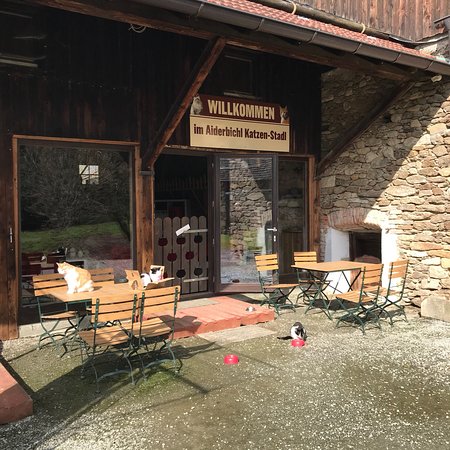 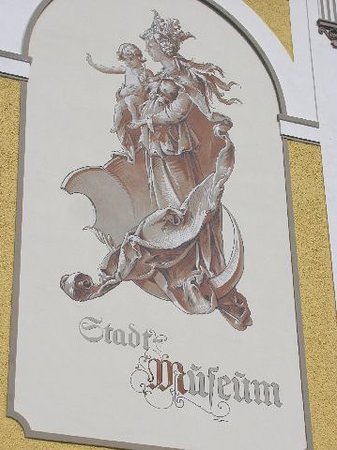 In the entrance fee the entrance ticket to the Handmuseum is included. The museum is housed in a protected former boys' school dating back to 1900. At approx. 1,500 square meters the permanent exhibition shows aspects of the cultural, economic and social development of the city and region, the early history of Deggendorf, settlers-nuns-citizens, tasks of the city, Deggendorf and Danube, market and trade, traditional Sell'sche pharmacy from the Biedermeier period,Deggendorfer Gnad, popular religiosity-piety and sacral art. On the ground floor (Municipal Gallery) special changing Exhibitions with contemporary artists of regional interest. A separate room is available for educational workshops. Opportunity to book different themes for school classes, groups or to book birthday parties. 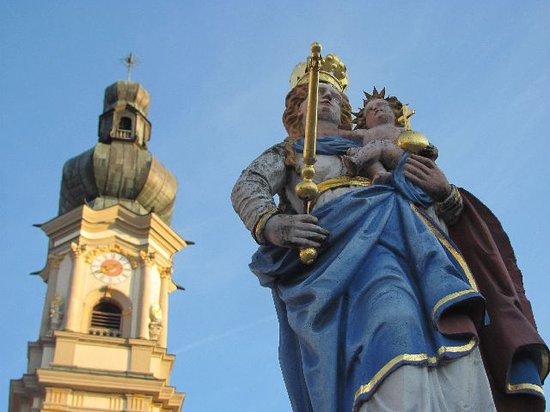 When we did visit the church was closed for renovation, but as the door was opened I had a peek into a nearly empty church. Its creation dates back to the 14th century, but there was already a much earlier chapel, an ancient trade route led along the Danube into Bohemia. The Church of Peter and Paul or Grabkirche (sepulchre) was built 1337-1360 as a Gothic pillar Basilica. Its 1723 Tower is beautiful baroque and is considered one of the most beautiful in South Germany (architect Johann Michael Fischer). Pilgrimage church with old votifs donated by believers out of gratitude that the “mother of God” came to their aid in times of need, the oldest one dates back to1483, the Pietà in the middle of the altar dates from the old church. Until a hundred years ago it had a Baroque altar which then sold to the monastery in Disentis (canton of Graubünden, South-East Switzerland) and was changed for a neo-Gothic altar made in Niederalteich. 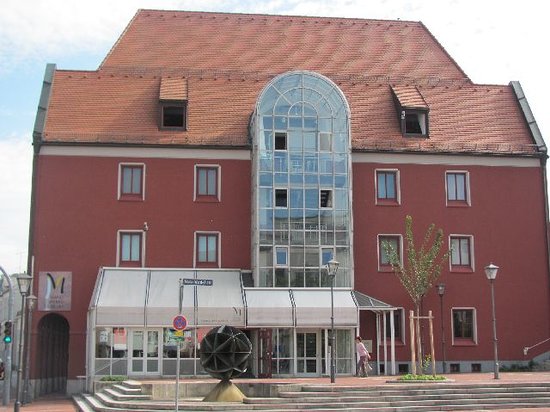 The museum of crafts is the only one of this kind in Lower Bavaria. Audio- and film documents complete the historical collection. The first part is about craft history from beginning to present. Printing part: history of the development of small-scale technology. Department "apprentice-journeyman-master": depiction of craft training. Furthermore: water craft: tanners, craft in the industrial era, women's craft, wood craft in the Bavarian Forest, unique inventories of a Gürtlerwerkstatt (decorative metalworkers workshop) from the region. In the museums-cinema: permanent exhibition documetaries about various crafts. The Museum also offers special changing Exhibitions on craft-historical topics and contemporary arts and crafts. In the Museum children and young people (as well as school systems) can book some time or birthday parties in the Studio in order to "Act". 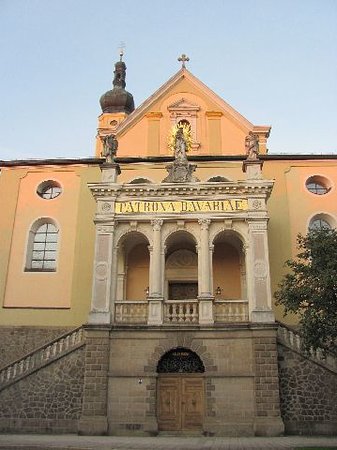 At the back of the church one can find the very old Kreuzweg Kalvarienberg statues. The present church is already the third one at this site. At the same spot stood 1240 a Romanesque chapel which was damaged by fire. The oldest part is the 1100 Tower Foundation which served as an escape- and defence tower. After the 30-year-old war was the Baroque Basilica in 1656 newly built (Constantin Bader): the Romanesque nave was demolished, a tympanum preserved: depicting the “flight of the Holy family to Egypt” (it is the oldest monument of Deggendorf and is on display in the Wasserkapelle). The Church suffered great damage during the War of the Austrian Succession. Due to heavy battles with the French in 1743 on the Geiersberg, in fight to regain the “Schanzen” (now Schanzenweg), fire broke out inside the Tower, spread to the nave and devastated large parts of the ceiling. Interior: vaulted choir chapels under the galleries, nave with six bays, aisles with arched Windows surmounted by an oval window, ceiling paintings, altar paintings, and Deggendorfs oldest city view in soapstone. Canopy with main altar in Salzburg marble (Matthias Seybold, Eichstätt), originally created in 1749 for Eichstätt Cathedral but in 1891 bought by city Deggendorf. Between the front columns on consoles the sculptures of Saint Wunibald and Richard, next to the twisted columns Saint Willibald and Saint Walpurga. On a socle a seated “Virgin with child Jesus” made from white Carrara marble, 1760 Rococo pulpit (Chr. März). Carved figures of the evangelists, John of Nepomuk next to allegories of Christian virtues. 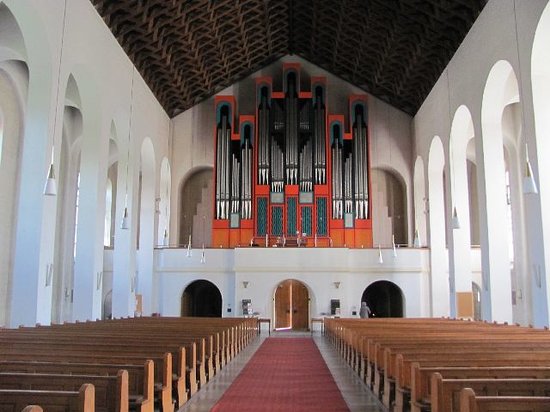 It is a modern church, so I never expected to visit this one for quite some time. Its exterior is very modern, its exterior very modest exept its main altar. What a gem!! Make sure to check the back of the altar as well... It is the latest Church in Deggendorf, with detached Tower 44 meters above sea level and mosaic on the East side, inugregated September 1954. The altar, a jewel of Bavarian altar-architecture, is in contrast to the sober Interior and has an eventful history: it once stood in parish church Mariä Himmelfahrt in 1696, in St. John in Schaching and from there it was moved again in August 1954, this time to St. Martin. New and old are organic connected in this altar: itdivides itself into several floors with Gothic reliefs and beautiful chosen figures, its color design is a feast for ones eyes. 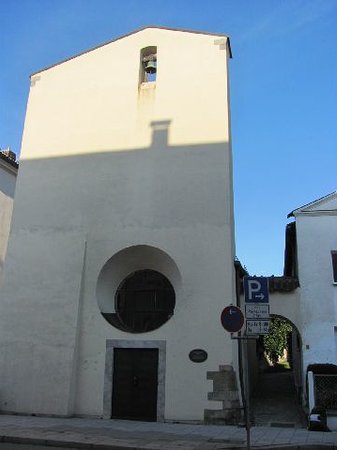 15th Century chapel which now serves as a war monument. In the choir are Deggendorfs oldest frescoes from 1415, similar to those in Rock-Hewn Churches of Cappadocia. The1892 Gothic frescoes were discovered and retained but have been heavily affected and are heavily weathered. Recognizable is a crucifixion scene in warm shades of blue, Brown and ochre. 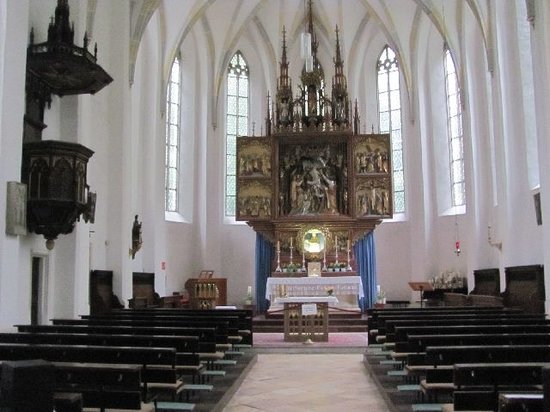 1486, “Mother of Sorrows” (Mater Dolorosa) Gothic pilgrimage church which was built for the grace image “Mother of God” (Pietà) in Rosary dating back to1400, the church is famous for its cultural- and medical history votifs, the oldest one dates back to 1483, and closely associated with the Danube transition: votifs depicting to the dangerous and hazardous life of traders and travelers who thanked the grace image for her help in times of need. One votive dating from 1816 shows the largely bare Geiersberg with church (it shows that at time the church had a Baroque onion-shaped Dome) with an accident on the bridge caused by an ice pack on the Danube, and farmers from the fishing village come to his rescue. In the pilgrimage faith source water had an important role: at the “five wounds source”, right next to the Church, the water flows from Christ's wounds, its sculptures date from the first half 17th century, it was believed that the spring water was beneficial to drink or washed with. 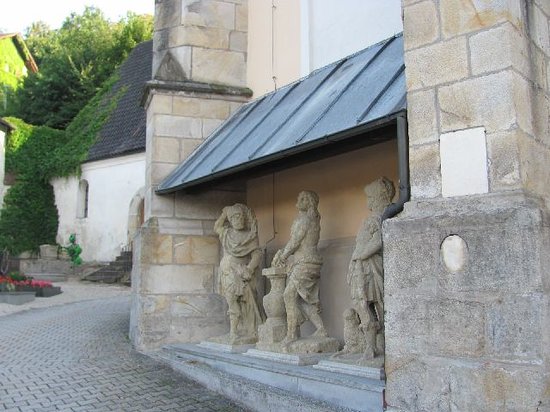 A few metres past the Heiliggrab-Kapelle the rest of the way of the cross. Of the seven original stations five remained. In the churchyard are the groups: Christ carrying the cross (Jesus takes the cross on his shoulders), mockery, flogging and Christ before Caiaphas (Joseph, son of Caiaphas), (Note: Christ's face is intact, the henchmen are fully damaged). On the path towards the Geiersberg “Christ with disciples on the Mount of olives”: a kneeling Christ looks at the Angel standing on the rock (whose hands fail), a bit further the “sleeping disciples”. At the Calvary (the stairs are at the left on the Geiersberg) are the grieving Mary and favourite disciple John. At the end of a steep staircase the cross dating from 1830, which reminds of the 18th century seventh station which lead from the Geiersberg to the Grabkirche. The statues which once stood at the Via Dolorosa are presently near the Church wall at the beginning of the Church stairs under an “umbrella”, the statues were donated in 1697 by Kaspar Aman (a benefactor born in Deggendorf and residing in Vienna). Early 19th century they were removed and no longer replaced at their original spot, 1998 renovated.