Top Things to do in Bishkek

Where to Eat in Bishkek: The Best Restaurants and Bars

Just at the northern edge of the Ala Too mountain range lies Kyrgyzstan's lively northern capital, Bishkek. With numerous green spaces, parks and gardens alongside Soviet-era buildings and monuments, the city retains its former Soviet Asian flavor. The city is home to many monuments and cultural institutions, including the National Historical Museum and Ala Too Square, where the changing of the guard takes place daily. The Dordoy Bazaar provides ample shopping, especially for Chinese exports.
Things to do in Bishkek 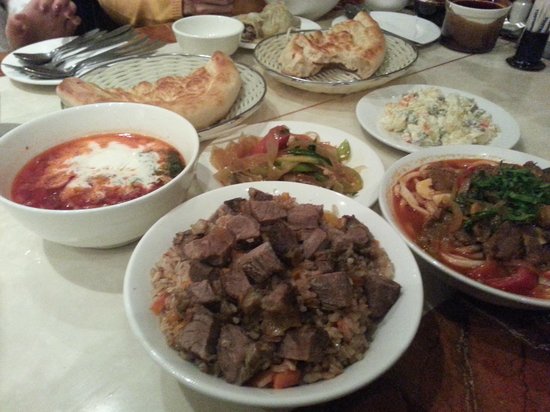 I went to Faiza the other day for lunch. Despite a professional and fast service, i was disappointed with the quality of my dish (lagman). It was tasteless . There now restaurants that serve better Kyrgyz food in Bishkek. For instance, Votoshka on Shopokova Street has an amazing choice of lagman dishes.

We enjoyed wine, salad and pasta dishes - all were delicious. Food arrived quickly and in generous portions. This is a favourite spot for their pasta and wine options, but the menu is extensive for those wanting other Italian main courses or pizzas. The Seating is in a hall with formal tables, suitable for families, meetings or a meal with friends. Worth a visit for those craving Italian food. 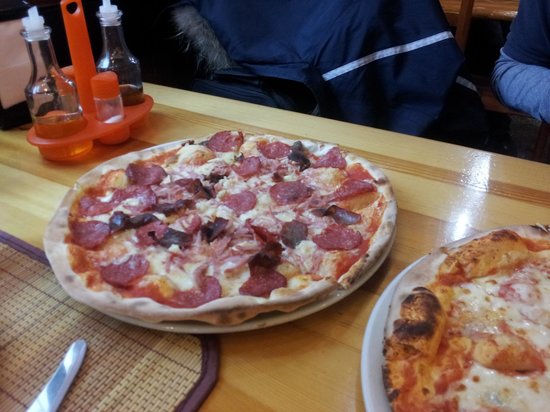 I very much admire people who are passionate about their business. The owner can be spotted delivering plates and hanging with the customers. Coffee is great here. Pizza, soups, salads, all very nice. Great to have such a place in our beloved capital. 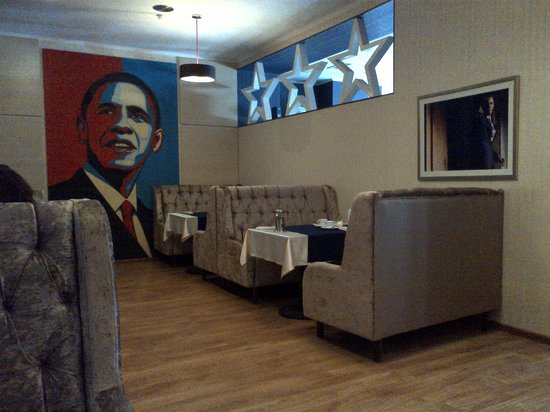 Obama Bar and Grill
93 Toktogul St. , Bishkek, Kyrgyzstan
14 September, 2017 - 5:35 pm
Well, after a sad experience down the street at another steakhouse, Obama Bar and Grill, as I was not satisfied as I could not eat at the other place. The service was immediately proven as I pointed to a table, saying that I will eat there, and then went to the restroom. When I came out, my place was ready and a menu was waiting for me! How wonderful that their service staff are so conscientious! I sat and I perused the menu and it took me some time as I always read the ENTIRE menu before ordering. So much to choose from; however, I wanted to have a steak in all fairness to where I was less than 15 minutes earlier. Here, the prices were considerably lower than the other place, around 450-550 som ($6.50-8.00). I chose to have a filet mignon for 550 som ($8), cooked medium rare. It also came with two small baked potatoes. I ordered a beer, a .75 liter bottle of 5 Ocean Ale from Belgium for 250 som ($3.60). What a lovely beer! So, as I sipped this brew, I had to think that I had tried to order 2 cheaper beers from the left side of the beer menu and, after the second order and being told that they did not have that beer either nor any others on the left side. So, it appears that they only keep more expensive beer in stock rather than try to sell the “cheap stuff.” I made my opinion clear on this to the server as I had been there before for a beer and they had none that I wanted and just left there about a month or so ago. I feel that this is “bait and switch” tactic by management so as to list beer and not keep it in stock to keep down the overhead; however this is not doing a good service for its customers and leaving the service staff holding the bag!
So, I sipped and I was so surprised when my filet mignon arrived and “looked” fantastic. Well, guess what? IT WAS FANTASTIC! Cut properly across the bias of the meat, cooked evenly on the outside and with that lovely medium pink color all the way through, it was a work of art. The flavor was delectable! They offered a demi glace sauce with it, served in a bowel on the top left of the serving board. Tasting it, it was just beef Bouillon with corn starch: no flavor, no spice. Actually, an au jus would have been a much better choice. I asked the server about this sauce and how much of it people actually use: he admitted that very few ever used it. I told him that this speaks volumes and that they should create a much better sauce for the meat and not waste the time of customers who have to figure out what it is (which I knew on the first taste, of course). So, a perfect steak, higher priced beer (GRRR!) and, now, the potatoes! The first one that I tried was rubbery, overcooked and the weird cheese on top that hung on for dear life as a solid entity was so unbecoming as it has no flavor. Why add a cheese with no flavor to a baked potato? I don’t get that at all. Well, the second one was almost heaven! Fluffy, cooked exactly right and a delight, minus that awful glob of cheese, to eat. I showed the server that the bottoms of these two potatoes told me the story of each of them. The rubbery one was twice as dark from cooking on the sheet as the one that was the best. The first was, indeed, overcooked.
Yes, I go into detail when I write about food and service. The Seating was comfortable. The beer, manipulated so that you could only buy the higher priced beer. The steak a delight. One potato BAD the other fantastic. I hope that they get rid of that ugly cheese cap in the future as it is ugly, tasteless and does nothing to complement the potato at all.
Overall, they lost 2 stars because of the manipulative beer pricing and the bad potato! For me, consistency is the most important thing that a restaurant must provide for its customers. You are paying for their expertise and their experience and, well, it should be “even” throughout the meal. Servers should not have to bear the burden of poor management or the lack of consistency on the part of the food preparation staff. Still, I would return there, order the same steak, ask for the potatoes to be consistently cooked and without that horrible cheese. I may have to bring my own beer next time.
In summary, it is a good value for the steak and, if the potatoes are correct (please order them without that cheese “hat”), a superb meal that can compete anywhere in the world. As to the beer, next time, I will bring an emergency bottle or two from home. In terms of literature, I am reminded of Ernest Hemingway’s “A Clean Well-Lighted Place.” Here, the table is extolled as well as the position of it and, of course, is a metaphor for life. We want a place to be clean and everything visible as much as we want it in life. Well, we want the same for eating out: a safe, clean, unassuming place to eat good food, enjoy friends and lovers and to leave with the greatest satisfaction. Well, out of 5 stars, two fell due to a potato and bad beer policy. Darn!
Video of this visit will be on my YouTube channel Anyse Joslin. 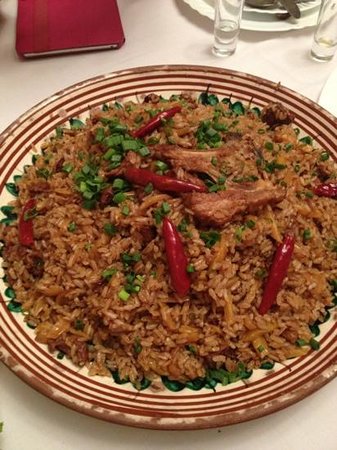 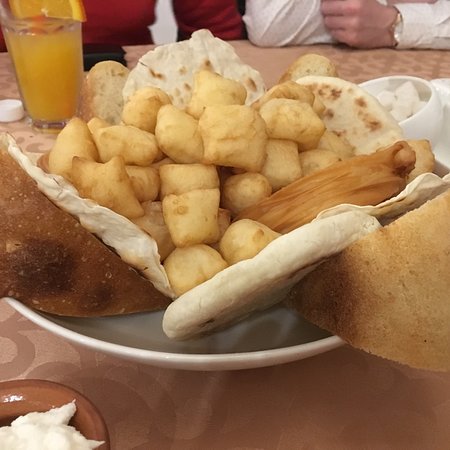 Supara Ethno-Complex is a custodian of age-old values & cultural traditions of the Kyrgyz people. It is a unique restaurant with a distinctive architecture and design, built with stone, wood, clay, straw, reed, and leather. We offer a wide selection of dishes of Kyrgyz nomadic cuisine, cooked with organic ingredients. We also conduct master classes on cooking traditional dishes and making felt. You can enjoy your meals in yurts, traditional nomadic dwellings, different in size, interior design and style as well as in cozy stone houses, which are cool in summer and warm in winter. We organize traditional Kyrgyz games: ordo, arkan tartysh, archery as well as live Performances of folklore musical groups and narrators of the Kyrgyz heroic epos“Manas”. We offer tours around the complex, where you can see a display of antique artefacts and museum exhibits. There&apos;s a souvenir shop with handmade gifts. We have unique conference facilities and equipment for various types of events.

Reviewed By Sonia B - Bengaluru, India

It's a lovely place to spend an evening with your group. Not only can you enjoy local delicacies sitting in a Yurta, you can also experience local customs and costumes. It's a big place, almost like a village, with tents, landscapes, hidden swings, Fountains, and lots of flowers. The place offers good background and location for group photographs too. Eat, take a stroll, eat again and buy some souvenirs from one of the tents. 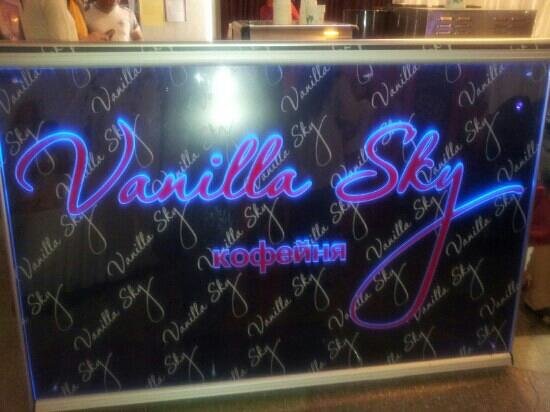 I don't know. The coffee is still good, but today I went for lunch and got the spinach soup and blinchiki with meat and both were just not tasty. The meat was definitely questionable and cold when it should have been warm, and the soup was almost tasteless.
My friend said her Bolognese wasn't very good, too.
I left disappointed and with a stomach ache. Also the waiter was kind of rude, but that's not new for Bishkek. Excellent Japanese restaurant! Great service all around. Easy reservation, great staff, kitchen chefs and the Japanese master chef/owner. Everything is high quality with eye for details. The dishes are truly great, freshly made and taste fantastically!
If I'm in Bishkek Furusato is a must. Highly recommended. 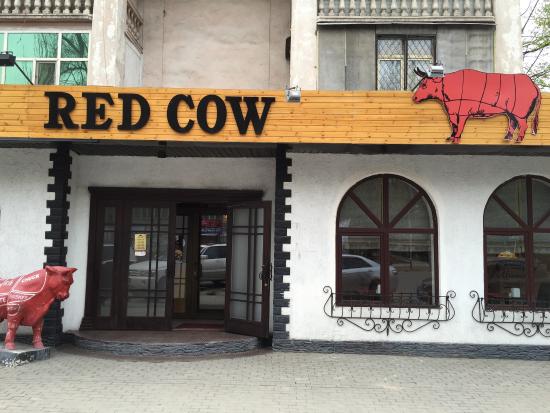 I went after I've read ratings here, and I am not sorry. Place is nice, staff is helpful, kind and English spoken. I've ordered chicken soup with noodles which was good and ribeye steak which was tender and grilled perfectly as I ordered (medium rare) With some side included (potatoes with mushrooms + sauce) and mineral water I payed around 15€. I recommend this place to visit.

Teahouse «NAVAT» - a vivid example of the legendary Eastern cultures meeting and receiving respected guests. «NAVAT» is an oasis for lovers of oriental cuisine among the noise and bustle of the city. For the design of the restaurant have been used only natural materials: handmade furniture, sofas, carved trestle, soft silk cushions, oriental ornaments. Author’s design creates space, at the same time warm and stylish, where you can stay to feel oriental hospitality and delicious cuisine. Teahouse «NAVAT» is the place, which you don’t want to leave. There you feel yourself at a party at the East friendly family with the traditions and distinctive style. We have a clay tandoor in our teahouse, where tender meat and poultrybakes. Also we have the huge wood-fired grill, where serves a great barbecue and shashlick. The secret of our teahouse «NAVAT» - tasty, timely and democratic. Fresh food, cooked with love and with oriental temperament – these are our spices of success of our restaurant.

This restaurant was recommended by our hotel and we are glad we made it to Navat. The ambiance is welcoming with good vibe, and live traditional music was played during dinner. English menu with lots of pictures and choices to choose from. Excellent Central Asian cuisine and price is reasonable. Comfortable Seating with very helpful staff. We visited when it was Ramadan and it was nice to see all local diners enjoying their meal with family at the end of the day.