Mevagissey (Cornish: Lannvorek) is a village, fishing port and civil parish in Cornwall, England, United Kingdom. The village is situated approximately five miles (8 km) south of St Austell. The parish population at the 2011 census was 2,015, whereas the ward population at the same census was 4,354.
Things to do in Mevagissey 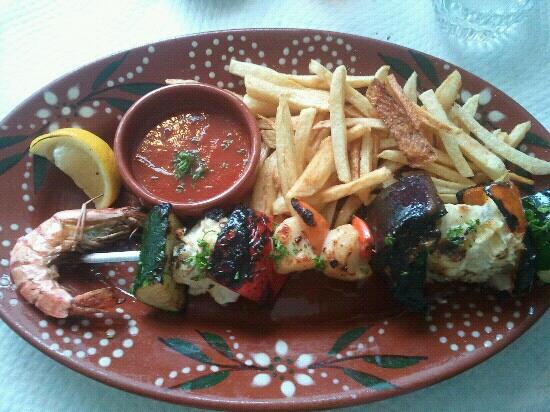 Situated in the heart of Mevagissey. A traditional authentic Portuguese Restaurant Seating up to 20 Serving fresh locally caught fish ( we supply the fish ourselves as Antonio, the chef is also a fisherman) and meat. Open for lunch serving Tapas and evenings serving a full menu. Wines , beers and spirits are all from Portugal. Family run business.

If you want to visit a restaurant were you won't leave hungry, this is the place, really generous portions, freshly cooked, such a friendly couple that run Alvorada, highly recommended 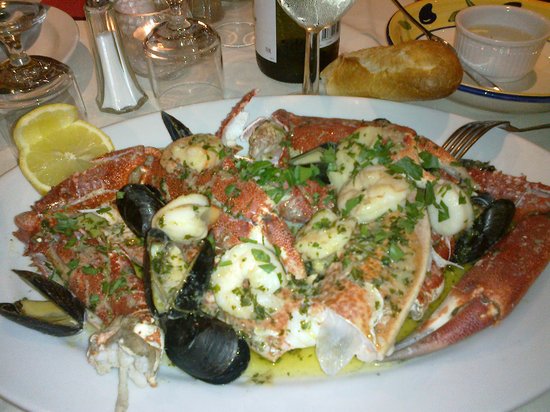 Roovrays comes highly recommended...And a Charming and ambient evening awaits you...Tastefully decorated with a French influence due to the French Chef and owner. Great value is offered with the Early Bird menu from 6pm till 6.45pm with 2 courses being £15 and 3 courses only £18. The a la Carte menu starts from 7pm and offers many delights from the freshest of ingredients and local produce. The art of having a relaxed and unhurried evening meal is still very much the main focus here at Roovrays and is done very intentionally by the owners who wish for their guests to have an evening experience enjoying conversation,the live pianist (check on booking when playing),fine wines while your food is unhurriedly cooked to perfection by the owner himself; it won&apos;t be a quick affair, just as it should be. Booking is very advisable to save disappointment especially pianist nights as tables go fast.

Starters of Crab Bisque & Chefs special fish soup were very tasty. The grilled tuna steak on Mediterranean salad with boiled potatoes was disappointing. The tuna was good but not the salad leaves with chunks of pepper, green beans & flavourless tomatoes. The Spinach & Ricotta tortellini in a creamy sauce with asparagus & mushrooms was ok. Price for two courses per person was £21 which was reasonable. Unfortunately many of the main courses had a supplement up to £10.
The ambience didn't encourage lingering, with jazz music played beyond background level. Uncomfortable with loud personal discussion ongoing between waitresses. Not the place for a leisurely romantic meal. Only Gordon's Gin available, no choice. 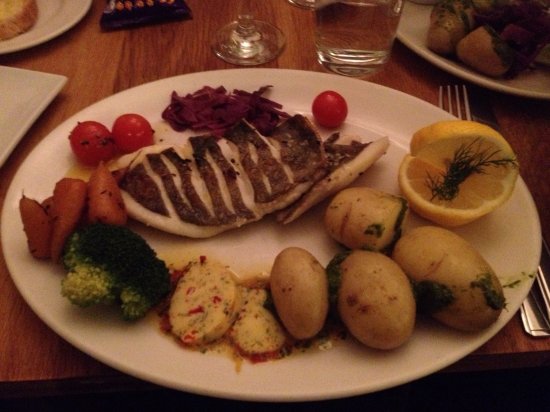 We visited on New Years Day for an early dinner and had a lovely meal with great fish, vegetables that were perfectly cooked and really nice puddings. The bottle of Italian red was good and reasonably priced.
Service was very good and although quiet when we arrived the restaurant became busier as our meal progressed.
Definitely worth another visit. 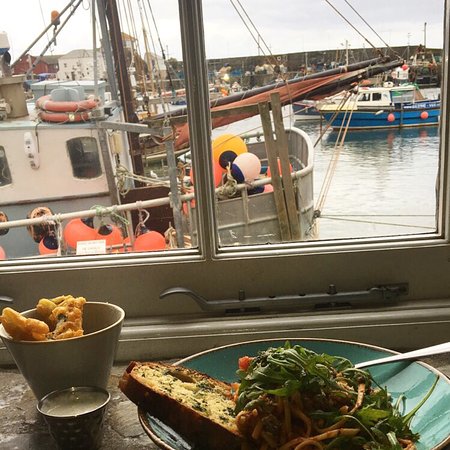 We visited for lunch and although the food was good, we felt it was not so good as previously. We started with aubergine chips and mackerel and tuna dip, followed by chicken skewers and rice for my wife and sea bass and scallops with couscous for me. It is possible that we just did not choose so well as previously.
Service was good. We did not know what to expect here, although it looked nice on its website. The view from the room was perfect. Although on the small side the room was very comfortable and luxuriously appointed. The staff were very friendly and helpful. The Coastal Path can be accessed from the hotel's grounds. The big surprise was the food. We had tasting menus both nights [Fridays and Saturdays at the moment]. I can honestly say that it equalled anywhere I have ever eaten and surpassed most, including some Michelin starred restaurants. Not cheap, but worth every penny. 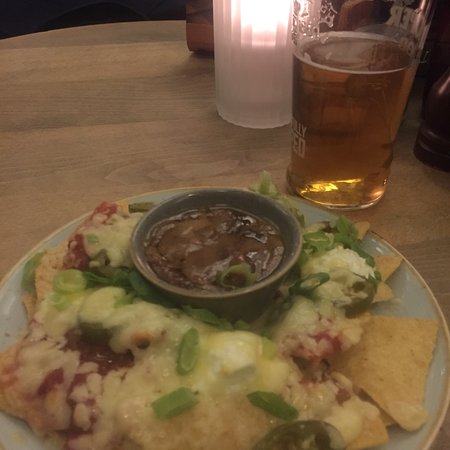 Award winning cosy Cornish pub situated in a beautiful valley near St Austell and the Eden Project serving great food, wine,ale, and coffee. Enjoy cosy fires in the winter months and a great pub garden in the summer

Having driven round St Austell, found nowhere to eat! Took a slight detour home to our hols cottage in Mevagissey and fell onto the Polgooth Inn - and at 1800 on Tuesday before the season begins the car park was full-must be a good sign, so we chanced it.
And what a find! Lovely welcoming inn, dog friendly and cracking food. The staff were lovely, the food - wow; the boss says ‘best ribs ever’ and my ‘brisket burnt ends’ were fantastic. And the beer, the St Austells range (including HSD lovely!!).
Can’t recommend enough!!
(Might even do a cheeky return visit before we venture back north) Chose the healthy option for lunch and had chips rather than sandwiches, Cornish pasties etc. Chips cooked to order and were worth the wait as they were lovely. Downside was the deep fried mars bar my son bought for himself. Whilst I am sure it was well done I tried it and they are wrong. 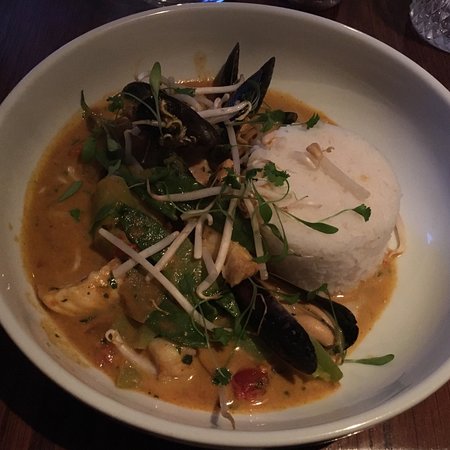 Kingswood Bar & Restaurant is most certainly Licence and a fine supplier of many Cornish produce to include the very latest sections of Tarquins Cornish gins! and Cornish Wines
If you are a fan of absolute fresh seafood the do not miss their Cornish Shellfish De La Mer. or the absolute best of USDA beef steaks!! I recommend you pre book in advance not to be disappointed 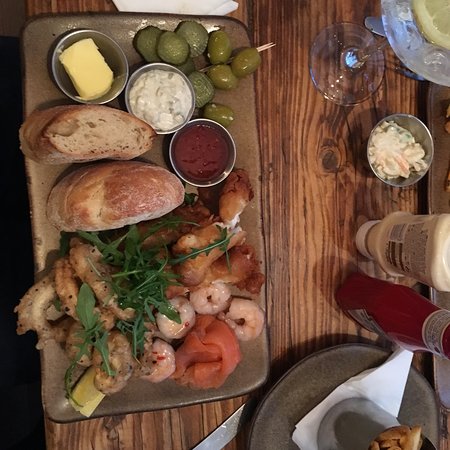 The Harbour Tavern is a free house bar with stunning harbour views located in the picturesque fishing village of Mevagissey. We are very passionate about using local ingredients and are very proud of our local suppliers. Our menu is freshly cooked to order & our specials feature locally landed fresh fish. We are a child friendly bar & dogs are welcome too. We offer a wide selection of Cornish Ales, Ciders & Sharps Cornish Pilsner. We hold a fun Quiz night every Tuesday 9pm start & live music on the last Friday of every month.

A lovely setting for very good fish and chips, friendly staff, good beer. Lovely fresh fish in a crispy light beer batter with very nice chips and my wife said the tartar sauce was the best. She doesn't have fish and chips often and has to be in the mood so that's a compliment. Wouldn't hesitate to go back if in Mevy. 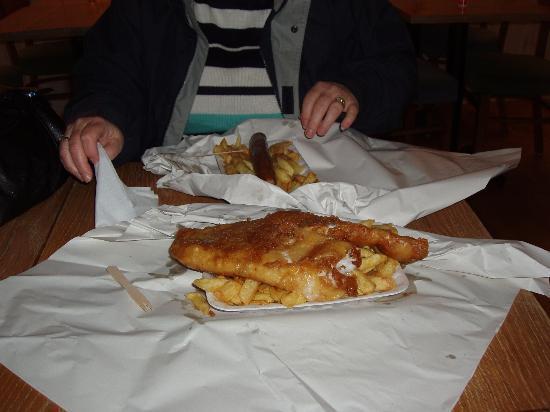 Reviewed By TravelWriter013 - Londoner in SW

We were out of season and happened upon this Chish and Fip place accidentally having givenup trying to find haddock for my husband and finding somewhere that doesn't fry in dripping (eugh). Well this place not only had haddock they fry in vegetable oil which means as a veggie i can eat the chips and things. The helpful lads even pointed out that they do use tongs across the range, how thoughtful. AND they had PEA FRITTERS, so I managed to have veggie meal - hooray. The fish portions are HUGE, don't order a large fish unless you are sharing it, or have the appetite of Posiedon. Freshly cooked and lovely but out of season it's open Fridays and Sundays (I think) for the winter, fair enough and well worth waiting for. Well done lads, a great fishless supper for me and a happy haddocked husband.