Best Greek restaurants nearby. Discover the best Greek food in Concord. View Menus, Photos and Reviews for Greek restaurants near you.. Concord (/ˈkɒn.kɔɹd/ or /ˈkaŋ.kəɹd/) is a city in Cabarrus County, in the U.S. state of North Carolina. As of the 2010 census, the city had a population of 79,066, with an estimated population in 2016 of over 89,891. It is the county seat and the largest city in Cabarrus County. In terms of population, the city of Concord is the second-largest city in the Charlotte Metropolitan Area and is the eleventh largest city in North Carolina.
Things to do in Concord

GREAT Greek food. Almost as good as my mom's. Spanokopita was very good, some of the best I have had in a restaurant. Greek salad had lots of feta with a nice vinaigrette. Prices are very reasonable. My companion had the steak platter (came with Greek salad and pita bread). Steak so tender and cooked to perfection. My chicken skewer was fantastic.

2. The Gateway to Athens 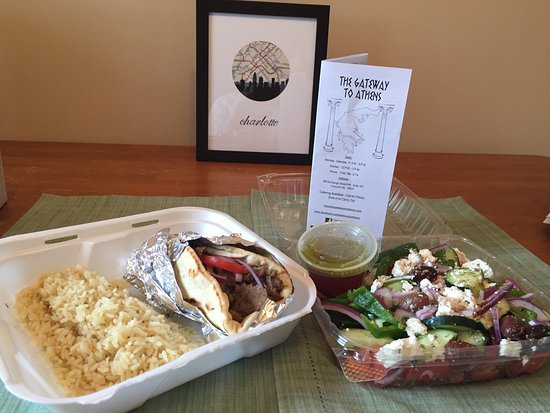 We stopped at this cute cafe for lunch. We were promptly sat and the atmosphere was nice. We ordered right away, fairly simple items. However, nearly 40 minutes later, nothing was served yet. We were told our appetizers would be served in "a few minutes" more than 5 more minutes passed when my husband finally started to complain. Finally our dolmades came out, and they were very good. Soups follows a few minutes later, a few minutes after that the pita and dip showed up. We had specifically asked nothing to be courses because we were trying to be quick. Daughters chicken nuggets never showed, waitress forgot to even put our order in for the gyros. We really needed to leave so we paid up and realized that item missing. Tried to add it in quickly, then she starts saying she forgot to charge for other things as well. At this point, husband is angry. Overhears kitchen staff laughing and deciding what to put in our food. At this point he's livid. Staff is being rude. We left having paid $60 in food, half of which we never received. Very unfortunate as the soup was great, the grape leaves delicious, but rude customer service response to the terribly slow service and numerous order mistakes made and kitchen threat of sabotaging our food ensure that we will never return.

Went to eat at the new restaurant and really liked it. I got the Grilled Chicken Chef Salad and was good, server did a great job and kept check on our glasses. Crowd moved in / out very well and tables were cleaned quickly for the next guest. Good portions and good service, I'll be back.