Top Things to do in Prince Rupert

Top 10 Things to do in Prince Rupert, Canada

Situated off the shores of continental British Columbia on secluded Kaien Island, Prince Rupert is steeped in the history of the Pacific Northwest. The area is the heart of Tsimshian Nation and is home also to other First Nations, including Haida, Gitksan and Nisga'a people. Visitors can learn more about the land's original inhabitants at the First Nations Carving Shed or by taking a guided tour of Prince Rupert's impressive Totem Pole collection, featuring both Tsimshian and Haida works.
Restaurants in Prince Rupert 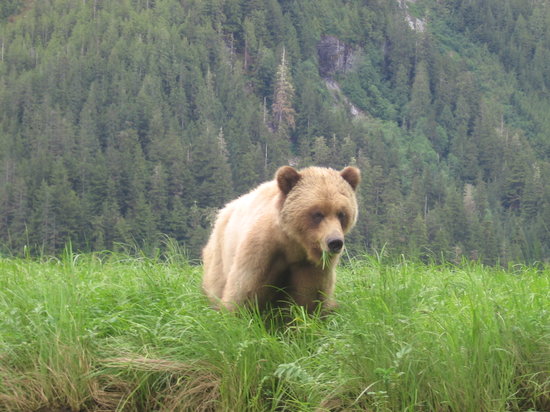 My daughter and I needed a mother daughter adventure to remember. Wow!!!! going on the Khutzeymateen Grizzly Bear Sanctuary was a dream come true.The Grizzles were unlike any other animal I've ever seen..What a treat to see a mother Grizzly and her 2 cubs swimming right in front of us, a huge Grizzly staring us straight in the eye.
Our group was treated to a show I'll never forget where a male Grizzly was courting a Sow. My pictures would win any photography contest. Jamie showed us that this Sanctuary teems with Grizzles with personality.
Dianne Ward
Woodstock,Ontario 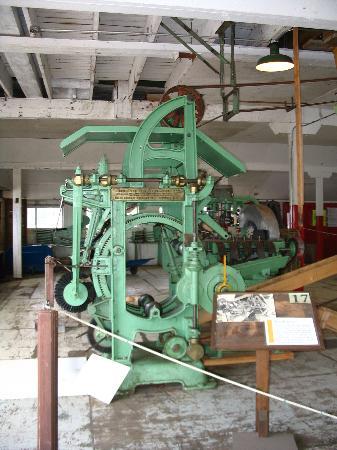 we enjoyed this experience the most on our recent trip to Prince Rupert area. The tour guide was super friendly and knowledgeable and showed a true passion for the heritage and history of the site. The cost of the tour was minimal and super informative and fun, My 6 year old really enjoyed the stories. The gift shop had the best selection of local vendors in the area.wonderful experience throughout. 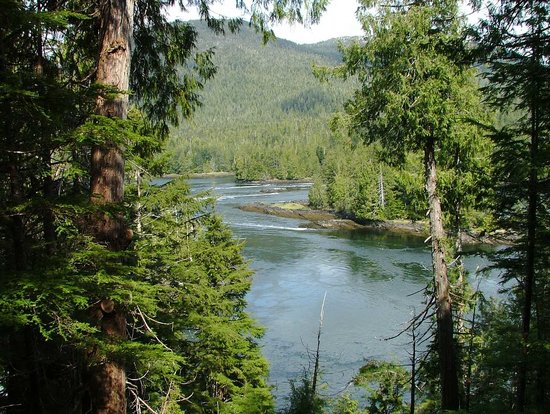 At our leisurely pace and including a half hour stop at the rope swings on the beach we completed the full circuit to Butze rapids and grassy bay outlooks in just under 2 hours. We were in no hurry but I would think you could complete the same in 1 hour if you chose.
There is wolf activity in the area so signs recommend not bringing dogs with you and definitely having them leashed. We saw many people bring their dogs in the middle of the day without incident.
The trail takes you through diverse landscapes and the backdrop is as stunning as the rapids and bay that you're targeting. There are outhouses a few meters into the trail and interpretive signs about plants along the way. Signs direct you to the rapids or grassy bay area and you can walk to either point and back or along a trail that links the two for a longer circular walk. The tidal conditions didn't provide any real view of rapids at the time when we walked and had that been a dealbreaker I guess we would have had to research the times to go but it was a very enjoyable well maintained trail nonetheless. 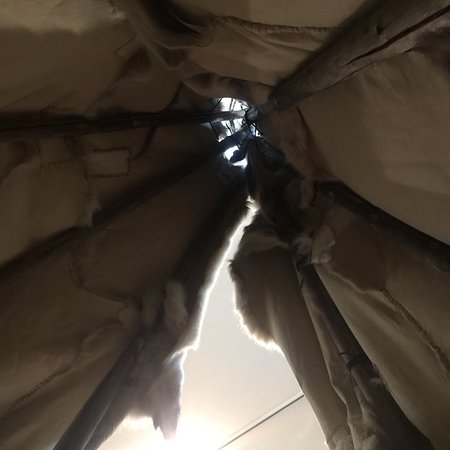 Learn about the history and culture of Northwest Canada from thousands of years ago as well during the 1800's.

Generally speaking, the kind of person who plans a visit to PR probably already plans a visit to this museum. My review simply seeks to heartily encourage you to visit, and allow for 90 minutes (maybe more) to really spend time with the artifacts that capture your attention, and read the historical/cultural detail. Also, it's not expensive, so should be easy for a family or group visit as well. Very good museum store with art, clothing, decorative, books. I had high expectations and they were met. The Gardens are beautiful with many different types of flowers, shrubs, plants and trees. Well planned so different flowers bloom in different seasons so there's always different colors to see and flowers to enjoy. Meticulously kept, you can see the dedication to keeping the garden up. Well pruned, weeded, deadheaded, etc. Lovely place to go and enjoy a sunny day. It's a short walk and there are picnic tables so a great place to take kids as well. 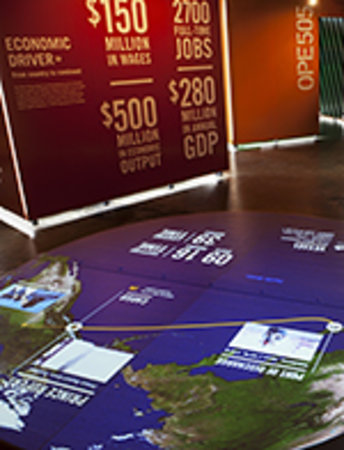 Located on the ground floor of the Atlin Terminal in the historic Cow Bay district of Prince Rupert, the Port Interpretive Centre tells the story of the Port of Prince Rupert. It is a story that stretches from 10,000 years ago -- when the area served as a vital trading hub for the Ts’msyen First Nation -- to the present, with the rapid growth of the port's commerce in containers, coal, and grain. A highlight for visitors of all ages is the Interactive Trade Route Simulator, a sensory feature that allows visitors to select a commodity and ‘launch’ a ship to visualize the supply chain of imports and exports flowing through the Port of Prince Rupert.

I confess, I had totally underestimated Prince Rupert when thinking about our trip. The port interpretive centre was eye opening. The history of Prince Rupert's development and growth and the plans for the future are very well presented on info boards, interactive displays and video presentations. It was interesting to all ages in our group (adults and U12s). We spent about an hour there and it is all free. The visitor centre is integrated and we were given great help by those working there. Both are open 7 days per week. Definitely worth visiting even if you don't need the visitor info part. 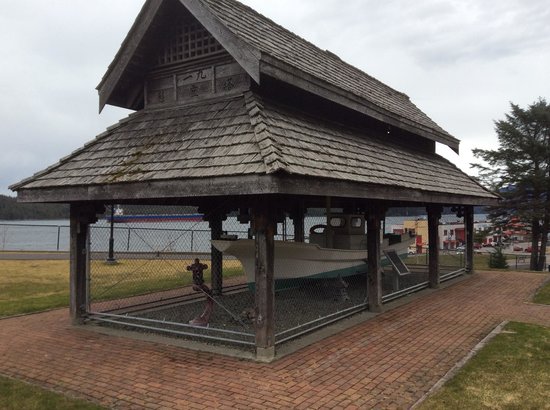 Pacific Mariners Memorial Park overlooks the harbor and is adjacent to the Museum of Northern BC. The Sunken Gardens are literally right across the street and Cow Bay – with all of its eateries and attractions – is but a five-minute walk. In short, if you’re visiting Prince Rupert, there really is no excuse NOT to walk through this small but highly significant park.
The park, as the name suggests, is dedicated to those who lost their lives at sea. There is a bronze statue of a mariner – representative of all those men and women who have not returned – pointing out towards the harbor, indicating that many lives have been lost in the waters that surround Prince Rupert. Perhaps even more poignant, the park features two memorial brick walls; one commemorates those who have died at sea while the other pays homage to those in the Prince Rupert area that lived by and loved the sea. With just over 950 names inscribed on these two walls as of 2017, you begin to realize exactly how important the ocean is to the area’s way of life.
There is a unique display in this park – one that surely catches people’s eyes as they wander by: the “Shinto Shrine,” which houses the Kazu Maru. There is a small information board that describes the significance of this vessel to the city of Prince Rupert. I won’t spoil the fun here, but will say that it highlights a unique connection between Japan and the “city of rainbows.”
The Pacific Mariners Memorial, despite its subject matter, is not somber. While it pays homage to those that have died doing what they love, it also looks towards the future. The small children’s play area is demonstrative of this as it, in many ways, celebrates future generations – many of whom will no doubt be drawn to the sea in one way or another.
Thus, if you find yourself walking by, do take the time to stroll through this park. Admire the natural scenery and the beautiful views, but also take the time to pay respect to those memorialized on the brick walls. 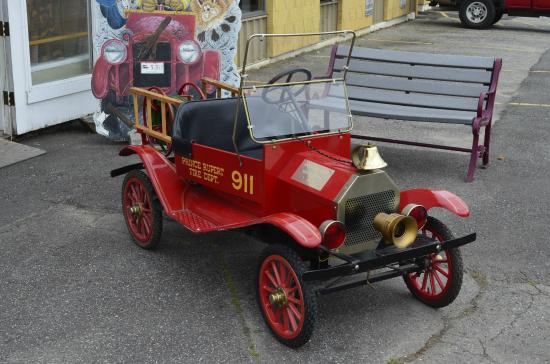 Incredibly knowledgeable and helpful gent running the place (Bryan ?) when we visited. Couldn't have been more interested in telling us about the place and it's history, obviously very proud of what he does. Amazing exhibits tracing the history of the Fire & Police Services in Prince Rupert from the early 1900's. We will definitely visit the Winnipeg Police Museum to check out their exhibits too ! 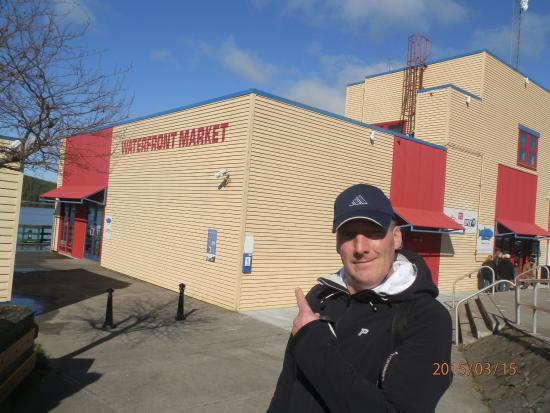 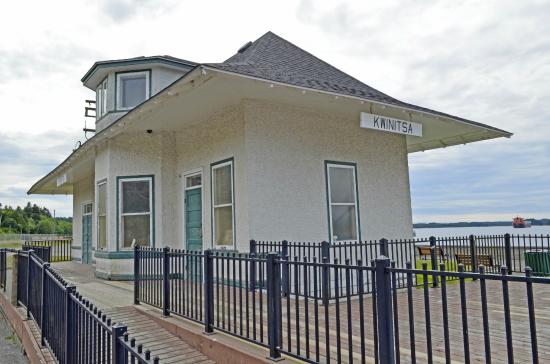 Reviewed By isabelydancer00 - Amsterdam, The Netherlands

The Kwinitsa Station found a permmanent spot on the Prince Rupert waterfront, fromm it's original location - (between the Khyex and Kasiks rivers) - on highway 16.
It's got historical railway informmation and photos. Cute little building. Does not take too long to go through. Worth a peek-a- boo for history and train buffs!