Where to Eat in Argassi: The Best Restaurants and Bars

Argasi (Greek: Αργάσι) is a village and a community in the southern part of the island of Zakynthos. It is part of the municipal unit of Zakynthos (city). In 2011 its population was 639 for the village and 1,266 for the community, including the village Kalliteros. It is situated on the east coast of the island, at the northwestern foot of the hill Skopos. It is 3 km southeast of Zakynthos city and 3 km northeast of Kalamaki. Argasi is a popular beach resort.
Things to do in Argassi 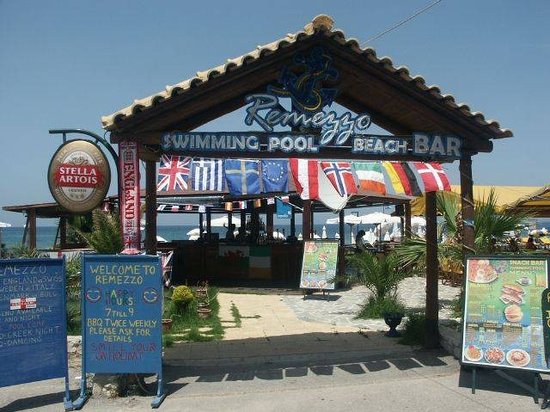 Located right next to the sea, this beach bar is laid back with plenty of free sun loungers. You only pay for your drinks and food throughout the time you spend there. So, it works out well if you spend the whole day there! There are places that charge 5euros for a sun lounger!
Food was good and the souvlaki portion was huge! Great service with good facilities! 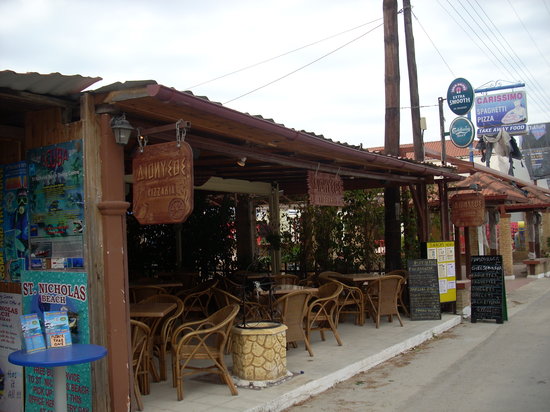 George and I spent the majority of our 2 week holiday in this lovely resturaunt. We tried nearly everything on the menu but my absolute favourite was beef stifado. The staff are amazing so friendly and funny and we are going back there for sure. We had the time of our life the staff couldn't have done enough for us. You must visit if you're in Zante. It is essential to make your holiday complete 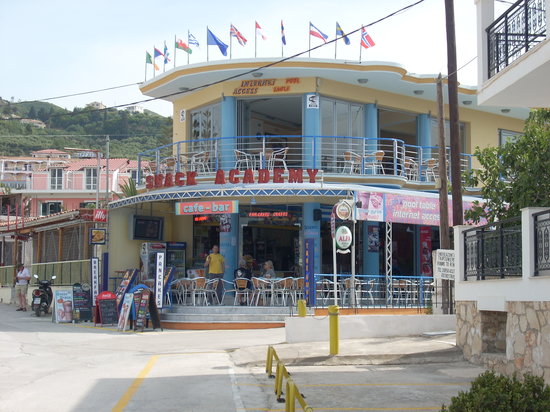 Only used this place twice. Once for coffee whilst we watched the McGregor v Mayweather fight and for a full English in the morning before we returned home.
If you are drinking across the road at Beer Academy you can order food from snack academy and they will bring it over for you.
We had coffee at 5.30 am watching the boxing and the guy brought it over to us....great service.
They also show sports in snack academy.
We had a decent full English breakfast here and also had baguettes made to take to the airport. Friendly staff and decent prices €5.50 for a full English.
Highly recommended 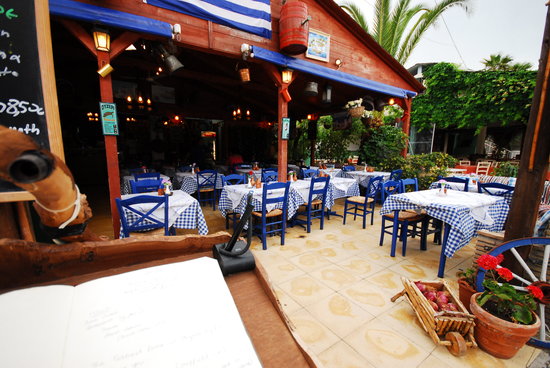 We eat here twice during our week and could not fault it. Probably the best choice of all the Argassi restaurants for Greek food and the portions and quality were always good.
Calamari and fish dishes are excellent as well as the traditional dishes. House wine is very palatable for the £ and the service is superb. Try the vegetarian meze, it's excellent.
Thanks again for 2 superb meals. 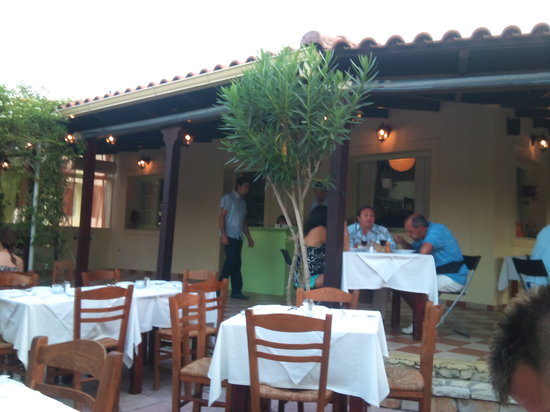 We went to the Peppermint during our weeks stay in Argassi, arriving around 8.30, like most of the restaurants it was very busy, the weather was a bit rubbish so we were seated inside. Initially everything was fine, we ordered drinks while browsing the menu and ordered, for us though after that it sort of went down hill, don't get me wrong I personally thought the food was of a very good standard although my better half thought her Salmon in orange sauce was a bit sweet, but that was only her opinion, anyway we received our starters and were enjoying the meal, I'd finished mine and my other half was still eating hers when they came and attempted to clear our plates away, I had to tell them that she hadn't finished, once we had both finished our starters, the main course was with us within minutes, there was no time to digest the 1st course and relax before the next course. After the main course within minutes we were asked if we required a desert which we did, again mine was okay but the other half ordered what sounded like a Crème Caramel but infact turned out to be a Crème Brulee, which wasn't the best in the world.
Don't get me wrong I did enjoy the meal and generally all the staff were very good but it seemed that people who were regulars got much better attention than those who hadn't been before, plus we are used to going to Taverna's in Greece where once you are there you are not rushed to get out so they can get the next customer in. 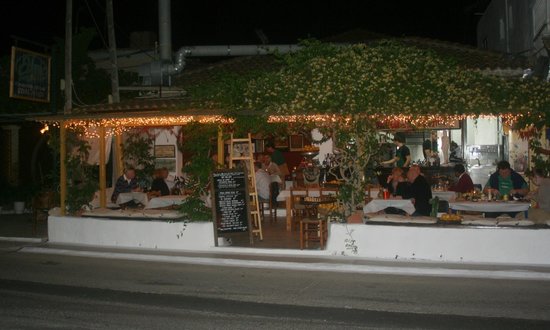 A party of 6 and we visited 3 times during our 1 week stay in Argassi. Most of us kept having the same dishes because they were that good!
The chicken/lamb mix on the spit is to die for!! Also the chicken on the spit is superb. Meat is so moist and tasty. The homemade sauces they come with also superb.
The family that run it are all so friendly and bloody good at their jobs. Just and all round superb meal.
You will not be disappointed! Great beach bar right on the shore line fantastic food and service all at a reasonable prices.The staff and the service are brilliant the setting fantastic 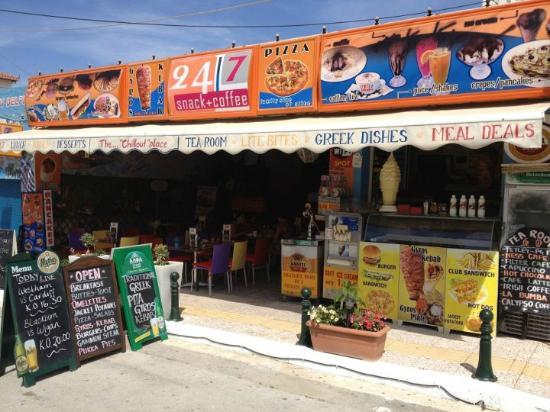 I went there with my husband on first night in Argasi I just followed their opinion on TripAdvisor. It's like bar with football on tv but guys working there are very kind and helpful. Everything is freshly made and savoury crepes are absolutely delicious. We came back there another few times. 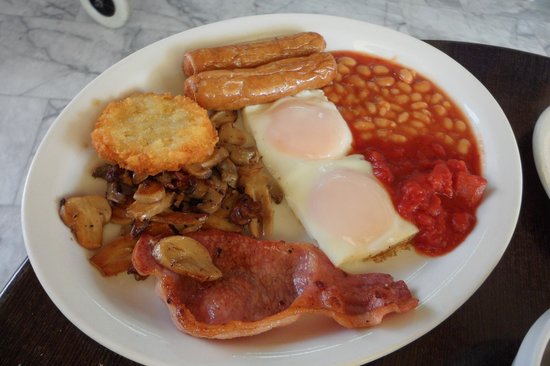 We returned here many times throughout our stay in Agrassi. This is a great place for breakfast lunch tea & an evening snack. Or you could merely use this place as a stopover for drinks. They have a good range of snacks and drinks. They also have a great range of ice cream and chocolate desert’s here that are truly amazing. All of the staff here are warm and extremely friendly. Andreas is the star he talks to all the guests who visit his cafe sometimes he makes his way around the cafe speaking to everyone as if they were guests at his party. If there is something you request that he has not got at the cafe he would go out of his way to get it. Many times i have seen him jump on his scooter ride away and return with the requested item. Andreas is an asset to the cafe and most definitely the best host in the resort of Argassi. I would thoroughly recommend a visit here even just for drinks and to relax at any time of day or night. On our last night we spoke to Andreas and thanked him for his hospitality throughout our stay in Argassi he said you are very welcome, I do not have very much but i am more than happy to share what i do have with my guests. 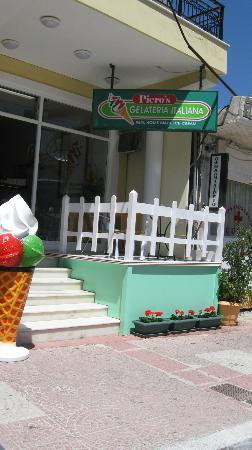 Piero 's gelatos are really good. I am Italian and I have found by Piero the right taste and quality of our best Gelaterias. I recommend.Grazie infinite per il feedback positivo.