Where to eat Central European food in Selva di Val Gardena: The Best Restaurants and Bars It was our last evening in Selva. We booked our dinner for 6 persons at the restaurant Speckkellar. The restaurant has two slots. We did make a reservation for the first slot from 7pm to 9 pm. After we arrived at the restaurant we were brought to our table, did get the menu and we were asked what we want to drink. After we did get the drinks, we ordered our starter and main course. The starters were good and we enjoyed them. The onion soup was very tasteful.So far so good. We ask the waitress if we could have a little break between the starter and the main menu. Yes, that was possible, but keep in mind that you have to leave before 9pm. Still 1,5 hour to go, so should be no problem. Ordering a small beer after ordering first a large one, was commented by âoh, you want a baby beerâ. After 10 minutes the main course was served. All the dishes looks fine. My daughter had ordered a large carpaccio (â¬ 18,00). She started her meal and after the first bite she said that she didnât like it. It was cold, did not have any taste at all. I tried too. And indeed the carpaccio was too cold, it was just a mouth of water, no taste at all. We told the waitress and she notified another waitress.Iâm not going to repeat what she told us, but it was our fault. She started a discussion for about 10 minutes trying to explain why the carpaccio was good. Finally she took the carpaccio back to the kitchen and one minute later the owner appeared at the table. More or less the same story. We had to put oil, pepper and salt on the carpaccio to make it tastefully. At a certain moment he made a remark on which my daughter told him that she didnât want anything else from his kitchen. From that moment we were transformed from quest to âpersona non grateâ. None of the staff was allowed to say something to us. When the rest of the group finished the main course the owner came at did clear the plates, saying only âare you finishedâ. Because no one was serving as anymore we decided to leave the restaurant. The carpaccio was still on the bill. We paid the bill and again the owner started a conversation about the carpaccio and lotâs more not so nice things about the client.To summarize: when you order twelve dishes and one dishes isnât well prepared (a carpaccio should not been served very very cold) most restaurant owners say: sorry, would you like to order something else. If this had been the case, we had order another dish. We did have more drinks, ordered desert and coffee. The restaurants earns more and has a satisfied client. How difficult could it be?Dear HGvdFfromNL and Family,Finally,i was waiting for your rewiew, and honesty im glad you did, but readers here on tripadvisor need to know what really happen on your visit at the Speckkeller.You daugther ordered a beef carpaccio as a main course. At some point you called the waitress, telling her she didnt like it because, to cold, no flavour and simply disgusting.As i came to your table, asking whats wrong, i tried to explained that our beef carpaccio is made from prime quality of filet of beef, and beacause itâs raw beef, you it has to be seasoned with oil, lemon, salt, pepper ect ect.She wouldnt even lissen at, your daughter just said it is disgusting. I guess you should learn at least some good manners.When i asked her if she want the menu to choose another main course, her answer was: I DONT WANT ANYTHNIG FROM YOU ANYMORE. END OF CONVERSATIONWE ARE THE GUEST HERE AND WE CAN DO AND SAY WHATEVER WE WANT.I just thought to myself, well thats a nice answer.You right when you say that i came personally to clear the plates, after you finished your mains, and YES, i did not asked you for anything else, â¦.. you shound know the reasom i guessAfter a while you got up and left. BUTâ¦â¦ you did not mentioned you were leaving without payingAnswer. Why do we have to pay? And yes, the dish was on the bill, because,first, it was nothing wrong with it, and second, you did not gave us the chance to bring you anything else.We had a second discussion outsite And again you said: WE ARE THE GUEST HERE AND WE CAN DO AND SAY WHATEVER WE WANT.YOU DID NOT EVEN OFFERED US A DESSERT, OR A GRAPPAWhy should i offer you something if everything taste so bad, and you already left without paying anywayDear HGvdFfromNL and family, you should learn to behave, just because you are guests, it doesnt mean you are allowed to do and say whatever you feel like. Learn some good manners first before you go on holiday, otherwise i would recommend, STAY AT HOME, because people like you are not welcome in my restaurant, and probably nowhere else Nocker FreddyOwner/manager

We went on a busy Sunday night. The service was excellent and selection varied. Maybe 40 types of pizza available! 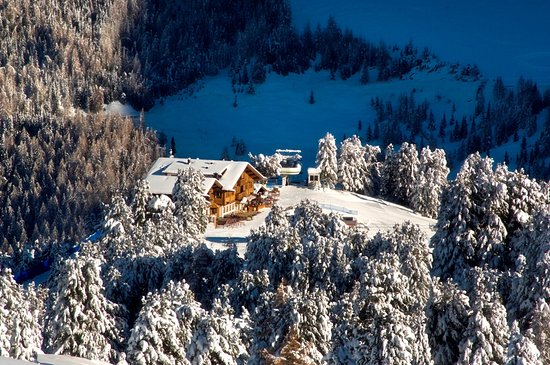 Downstairs, the restaurant features a self-service offering which looked ok. Upstairs, the setting completely changes. The first floor is dedicated to a small gourmet place, with an even smaller balcony, Service is good, the food is outstanding, yet you need to bring a bit of time (we spent 1.5 hours+ for three courses). There is also an outstanding wine list, with many of its bottles decorating the shelves throughout the main room. We very much liked the tartars (beef and tuna), and the entrecÃ´te. Expect to pay around 40 Euros for three courses, without wine. But it is worth it.

Where to eat German food in Selva di Val Gardena: The Best Restaurants and Bars