Top Things to do in Vientiane

What to do and see in Vientiane, Laos: The Best Places and Tips

Vientiane is the capital and largest city in Laos. Located on the banks of the Mekong River, Vientiane is a city steeped in legend and history. The city is the home of the massive gilded stupa, Pha That Luang, a national symbol of Laos. The streets are lined with trees, French colonial buildings, street markets, Buddhist temples, and noodle shops. Just outside the city is Buddha Park, a garden littered with over 200 cement sculptures depicting the gods and monsters of Buddhist and Hindu myth.
Restaurants in Vientiane 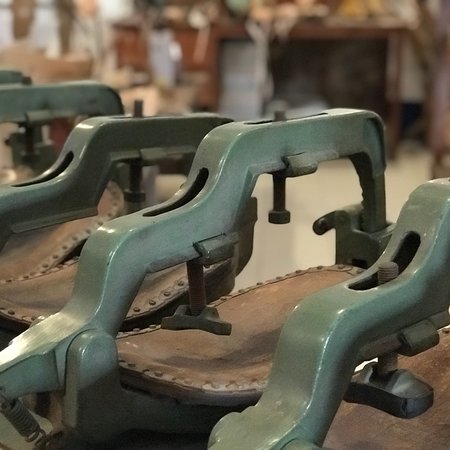 This is a rehabilitation center for handicapped, but you will be visiting the museum that addresses the long term consequences of what we (America) did to Laos during the Vietnam war. In spite of the fact that we were not at war with Laos (and in fact as a party to the Geneva Convention were prohibited from bombing it) we did in fact drop more bombs on Laos than we did in total in WW 2 (even worse, many of the bombs were jettisoned by planes whose Missions were aborted but they did not want to land back at the airbase with live ordinance still onboard). As bad as this bombing was in general, the use of cluster bombs in particular is what makes this such a tragedy. Millions of unexploded cluster bombs (the size of a small ball, packed with ball bearings) still litter the countryside, just waiting for the unlucky person/child to find them. As with the scourge of landmines, these weapons maim and kill long after the war has ceased and are difficult (and expensive) to located and destroy. The museum is free, donations are welcome and the center does great things for people with all forms of handicaps (not just war related). Please visit so that you know some of the unintended consequences of war/weapons which were used in the Vietnam war and even worse, have even been used since. 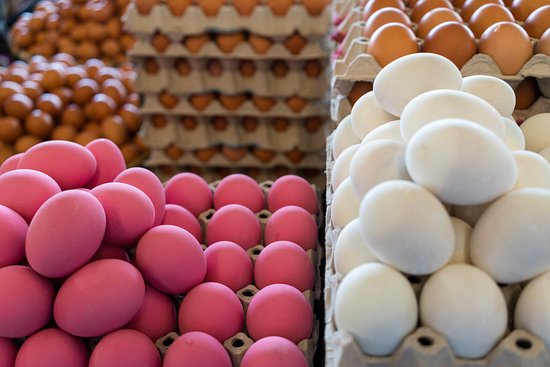 Lao Experiences offers Lao cooking and culture in Nook's garden by the Mekong River. Learn about ingredients you will use to create your Lao lunch. Make a variety of popular Lao dishes using traditional implements and techniques. Learn secrets of making perfect sticky rice. Meet at The Full Moon Cafe at 8:00am for our Fresh Market Tour & Tasting, 10am for our Lao Cooking Course. Book and pay at The Full Moon Cafe (Rue Francois Ngin) Riverside Precinct the previous day. 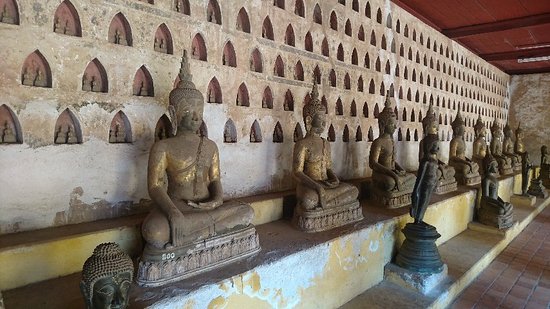 This temple contains 6,840 Buddha images of gold, silver and bronze.

Fascinating temple, all the different little Buddha statues around the courtyard building. Loved seeing the old murals inside. Vientiane is actually one of South-East Asia's most ancient cities, predating Bangkok and Phnom Penh by centuries. War has inflicted a lot of damage, so little remains of its ancient past, but the grounds of this wat contain some intriguing hints.
Behind the vihaan are the ruins of a Khmer stone temple. There is little to see but they indicate that Wat Si Muang was already a sacred place by the twelfth century.
The vihaan in front of it is a colourful Lao-style wat with obvious Thai influence. Painted in reds and oranges, it makes a lively impression, even if it isn't one of the more aesthetically refined of Vientiane's wats. The interior attracts local devotees, making it an authentic cultural experience. But this is a modestly engaging wat only. 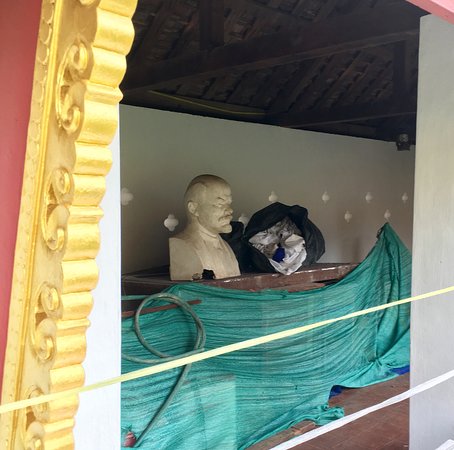 That Luang is the most important religious building in Laos. This Buddhist stupa is depicted on all Lao banknotes & on many buildings. Worth strolling around & visiting the reclining Buddha in the complex next door. There is also another Buddist temple nearby which you can go inside so don't rush your visit & spend at least an hour here! There is only one entrance fee for That Luang @ 10000 Kip. 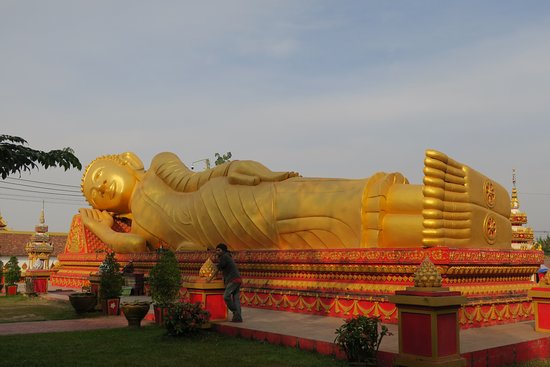 We are afficianados of historic religious architecture, but this wat has nothing special to offer. In all honesty, we have driven past numerous more interesting-looking wats by the side of the road over the past few weeks.
The most famous thing here is a large Sleeping Buddha. If you have never seen one before, you might check it out, but this is artistically undistinguished with a rather plastic look. The ordination hall appears to be of no great age either. The thaat (chedi) is a small Lao-style chedi of a very generic nature. Vientiane has many better wats than this one. This sculpture park is a collection of hundreds if Buddhist and Hindu statues scattered around a meadow.

the fact that this is a highlight of the capital tells you that Vientiane is not about the sights. The place looks ancient, but only because the concrete is weathered. Road out there is currently under construction, which makes it even less attractive to go there. 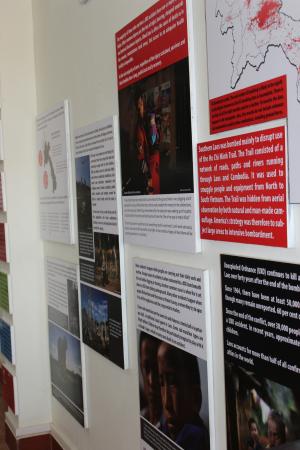 The UXO Visitor Centre provides visitors with an opportunity to learn more about the most bombed country in the world per capita, and about the work that MAG has been doing in Lao PDR since 1994 to save lives and support development for local communities by clearing the deadly remnants of the bombings.

We visited the MAG uxo visitor centre as a top priority when we were in Vientiane and it did not disappoint. It was incredibly informative and interesting and we learnt so much about the impact of the unexploded uxos around Laos. It is a fantastic cause and we made sure to donate to help they great work.
I would urge anyone in the area to go to see for yourself and donate to this very worthwhile cause. 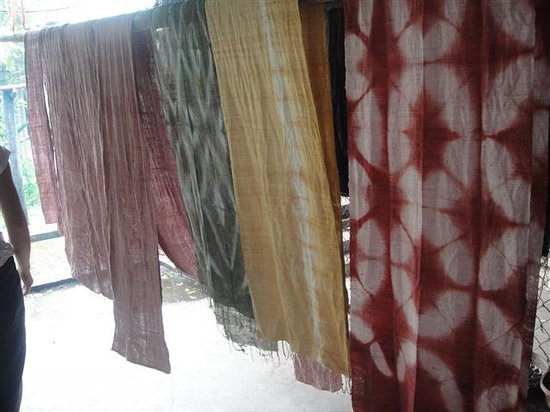 Houey Hong Vocational Training Centre trains Lao women in weaving, natural dyes, sewing, tailoring and business administration. Beautiful handwoven silk items are made on the premises, along with other products in a range of Lao textiles. Visitors can see the weaving and natural dyes, as part of the every day working environment at the centre. There is a retail shop, where handmade items of excellent quality can be purchased at reasonable prices. For those interested in textiles, or looking for a fun hands-on experience, there is a range of workshops ranging from a half day, full day, to several days. You can learn about natural dyes, and different weaving techniques.

If you are a compassionate loving person you have to go and experince this. Learn first hand how these battered, handicapped, unskilled get the training to help them in their villages to survive and to become productive. It does not get funding from the government only through private donations, a private NGO and profits from the items they learn to make an sell. 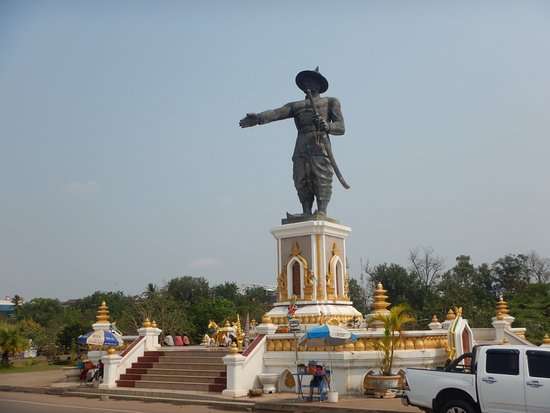 We were taken there by our guide to have a sunset view of the Mekong River. Quite frankly, I have seen much better in other parts of the Mekong. The otherwise quite pleasant but ordinary view were further marred by heavy mist from excessive crop burning in the country side.