Top Things to do in Loikaw

Loikaw (Burmese: လွိုင်ကော်မြို့; MLCTS: lwing kaw mrui., pronounced [lwàikɔ̀ mjo̰]) is the capital of Kayah State in Myanmar. It is located in the Karen Hills area, near the State's northern tip, just above an embayment on the Pilu River. The inhabitants are mostly Kayah (Karenni). Myanmar's largest hydropower plant built (by the Japanese as war reparation) is located about 20 km east of Loikaw at Lawpita Falls.
Things to do in Loikaw 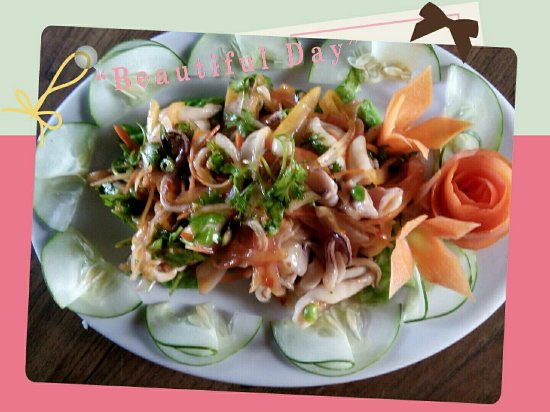 The Belu Chaung river bisects Loikaw town and there are five Bridges that cross it. Walking from my hotel located between the first and second Bridges I miscalculated, imagining the Pho Kwar to be somewhere near the fourth bridge on Daw na Street, Deciding to stroll along the concrete footpath along the river bank I was a little put off as dusk approached and the restaurant was nowhere in sight. The Pho Kwar restaurant is in fact on the southern bank of the river right next to the Shwe War Street (fifth) bridge.
A little dingy looking from the outside one is pleasantly surprised by the shady riverside ambience of the dining room. The views are not spectacular, just the river and the bridge through the overhang branches of a large tree but there are couple of tables el fresco right on the river bank,
After Reading previous reviewers comments I was a little wary of the mea dishes and deciding to go safe ordered sautéed water cress (ipomoea Aquatica, morning glory, kangkung, kangkong or what ever you call it) with fresh mushrooms. This is a standard dish that I often order and I was very happy with what was served. The portion was large and the dish quite tasty. Apparently traditional Kayah food is also served if pre-ordered to allow sufficient time for preparation.
Service was good but then I was the only diner. I don’t think I will be repeating the long walk again any time soon, but should you be in accommodation near the Pho Kwar, it’s worth a visit. 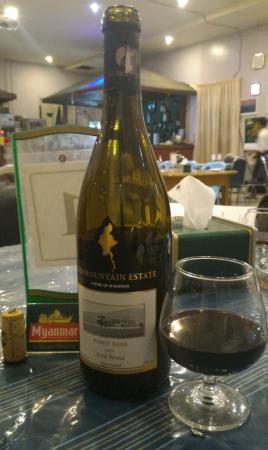 I went there with my guests from Germany. They like the food and as it is difficult to find a good restaurants for foreigners, this is great. But I think when we get the bill the price shown in the menu and in the bill is abit different. May be they have big portion and small portion. I have Indonesia style fried rice, very good tast and big portion even I use to eat alot. My guests ordered grilled dyck and was great too. Just make sure of the price and it is a good restaurant in town. Entertained 10 Myanmar colleagues here for lunch the other day. Was spared the chore of choosing dishes and the selection was excellent including several vegetable dishes. My favourite was stir fried mushrooms and fried morning glory (kangkung). This restaurant is not riverside as stated in the only other reviewer but located 10 minutes drive from Loikaw, in Kyi Tha Yar Quarter. Highly recommended. 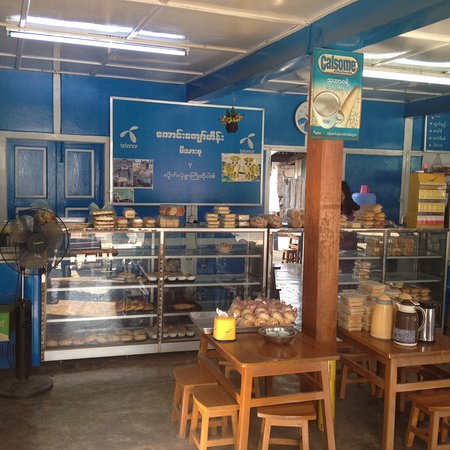 As Loikaw wakes on a winter’s morning the Kaung Kyaw Hein bakery and coffee shop is the place to be. Low timber tables and even lower stools reminiscent of the coffee shops in Vietnam spread out onto the street. This is one of the few places in Loikaw that serve coffee. Do not expect lattes or cappuccino. The coffee is usually served floating on a thin layer of condense milk which if you do not stir is not bad at all. The owners will, on request serve your coffee black if such is your preference.
The bakery turns out a variety of savoury and sweet offerings, however do not expect much in the bread range. There are fresh baked plain buns and small loaves of bread, albeit a tad sweet.
They also serve the obligatory fried rice topped with a couple of fried eggs and noodles from their own kitchen. Patrons can also buy noodle soup from a pavement stall next door.
Customers start arriving early in cars and motor cycles. Young men take coffee and cigarettes sold singly. Mums arrive to take home their daily supplies and others sit for breakfast of bring their children for a before school breakfast or for goodies to pack inside their lunch boxes.
To add to the ambience, prepubescent monks walk by, the leader striking a bell to alert pious donors of food for the nearby monastery’s daily needs.
The Kaung Kyaw Hein seems to be open till around 9 pm. 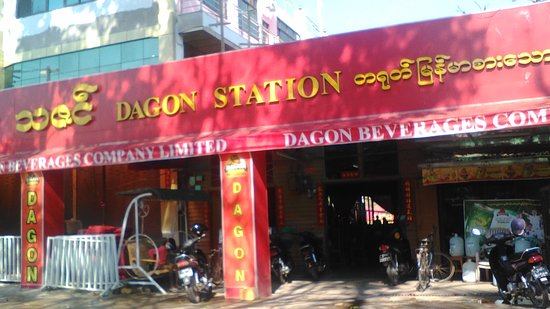 Located beside but slightly back from the banks of the Belu Chaung river Thazin seems a popular restaurant for locals and in fact the only other foreigner I have seen in Loikaw in over a week. Was taken there for lunch by my counterpart and enjoyed a range of both vegetarian dishes including poached carp stuffed with fish roe, fresh pate of augergines which, except to the slight hint of chilli was not un-similar to the the Greek melitzanosalata, a chicken curry less tasty that the Burmese curry a-la Charmain Solomon my wife has made for years, and two or three other vegetarian dishes. All in all a very satisfactory meal in the most pleasant company. 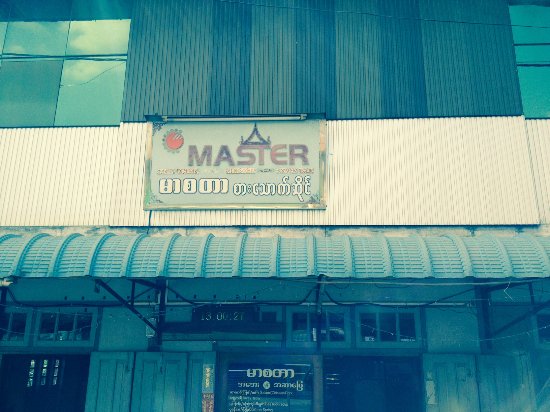 This is one of two Master Restaurants in Loikaw. Master 2 is one of a small group of restaurants located on the western banks of Naung Yah lake. As with Masters 1, the menu offers a variety of local, Chinese and western food. The ice cream, like that of its sister restaurant is excellent as are the fruit shakes and the smoothies. The fries and burgers are good and the place offers a nice break, with scenic views at the end of a walk around the lake. On the eastern shore of Naung Yar Lake. The restaurant can be approached across the foot bridge that spans the Lake or from 6th Street down the side of the the Myo Nan pagoda.
Have eaten here several times with colleagues and have enjoyed the Burmese and as well as the Chinese dishes on the menu.
The restaurant offers excellent views across the lake.
There is a BBQ area but I have not either seen it in action.
There is a range of beers and wines and what seems to be a fully stocked bar. Great service, reasonable sized serve and very moderately priced. 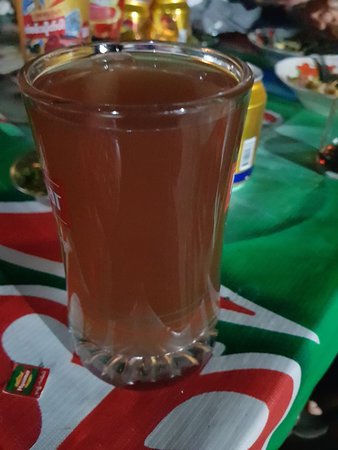 This is a place where locals gather to share a glass of local corn wine with traditional Kayah food and snacks. The snacks include small cubes of excellent dry beef or buffalo meat with a spicy dipping sauce, a Kayah version of rice porridge topped with fresh coriander, a dark soup that hides scores of whelk like mollusc that my host and grandson eagerly sucked out of their shells, pigs intestines and the inevitable quite fatty Kayah sausage. The evening atmosphere is subdued even though most of the tables are occupied by groups of men. Situated close to the airport this is not an easy place to get to but a must for those wishing to experience an important part of contemporary Kayah culture. Apparently they do get large groups of tourists but much nicer with a small group of friends. 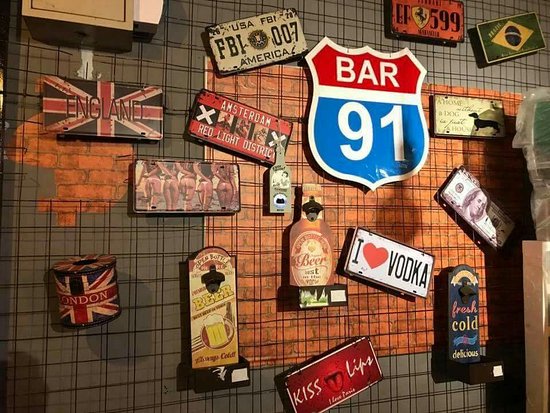 Nice location beside the river.

My introduction to Bar 91 was sitting on the deck of the Golden Lion Restaurant watching the launching of a massive hot air balloon from the banks of the Belu Chaung River. As the balloon rose into the evening sky it started spewing scores of small parachutes, each supporting a small candle in coloured cellophane baskets. Quite spectacular, as these coloured ‘lights’ floated back to earth – several, landing in the river, which for a while, sparkled with coloured lanterns that gently floating out of sight.
We decided to visit 91 that night, even though it was a little out of the way. The concept is modern, albeit a little ahead of its time in Loikaw, where the current small pool of potential customer seems to be making it hard going. The drinks were not cheap and mixed out of sight. More power to the young men who have started this business and I wish them all the best. May their dreams come true. 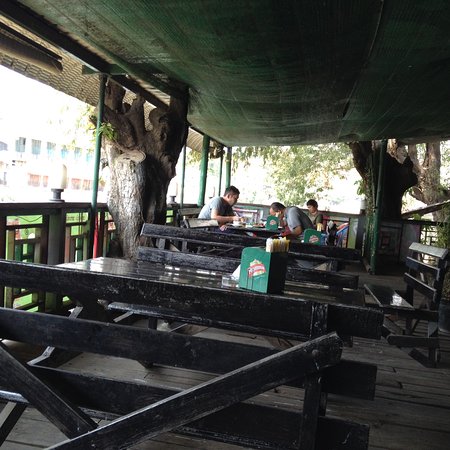 Have eaten here on several occasions and have always been pleased with the food. Located next to the pool hall on Nanda Street near where Pa Dauk Street crosses the river, this restaurant, sits on the edge of the Balu River. You enter the restaurant through two large wild-west style swinging salon doors. There always seem to be several customers in the main room watching a variety of sport on the large screen TV. The bar has a dark and a light beer on tap and seems to be well stocked with spirits and bottled beers. Passing through the main room you step down onto a large Terrace overlooking the river. The rough hewn wooden floors and trestle tables add further ambience. There are a couple of private rooms. One is quite small with one table overlooking the river and which could be called romantic, while another is larger accommodating around 20 diners.
The menu has a selection of both local and Chinese dishes and the serves are generous and the prices very reasonable.