Top Things to do in Province of Salamanca

Top Restaurants in Province of Salamanca

The 10 Best Things to Do in Province of Salamanca, Spain

Salamanca (Spanish pronunciation: [salaˈmaŋka]) is a province of western Spain, in the western part of the autonomous community of Castile and León (Castilla y León). It is bordered by the provinces of Zamora, Valladolid, Ávila, and Cáceres; it is bordered on the west by Portugal. It has an area of 12,349 km ² and in 2014 had a population of 342,459 people. It is divided into 362 municipalities, 11 comarcas, 32 mancomunidades and five judicial districts. Of the 362 municipalities, more than half are villages with fewer than 300 people.
Restaurants in Province of Salamanca 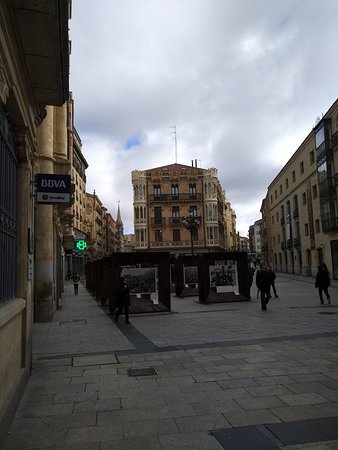 This has to be one of the most beautiful locations in the world. However unlike many historic centres, it is buzzing with life. Clearly it is as popular with the locals as well as many visitors from all over the world. Also, unlike many other famous locations, prices everywhere are very reasonable with efficient and cheerful service. Everybody in the world should go there at least once. 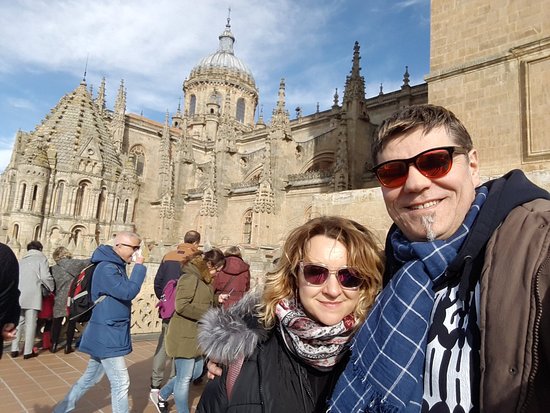 This tower was opposite our NH hotel.
The traffic light system is such a good idea, no worrying that you will have to meet someone on the spiral staircase and try and squeeze by.
The views of stunning Salamanca are worth the climb and I hate too many steps....it's my knees you know! A must place to visit in Salamanca and there are so many! This 18th-century square is one of the largest in Spain.

Very picturesque square with attractive shops, bars, restaurants with attractive apartments above. very effective lighting at night to complement the architecture. Take time to stroll around the streets leading off as there are some good bars and restaurants. Look up to see the storks on their nests. 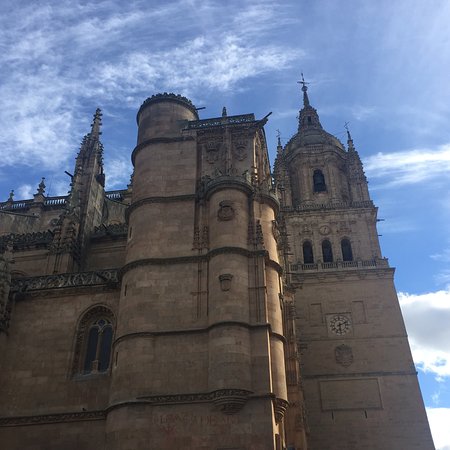 Not many cities have old and new cathedrals, let alone having them cojoined. We walked up via the square of Patio Chico towards the closed doors to the old Cathedral and then walked round to the new Cathedral entrance where you pay and walk through from one Cathedral to the other. To be honest I’m a bit “churched out” after spending so long travelling the continent and now often stick to viewing the external architecture which in this case is certainly something to behold! 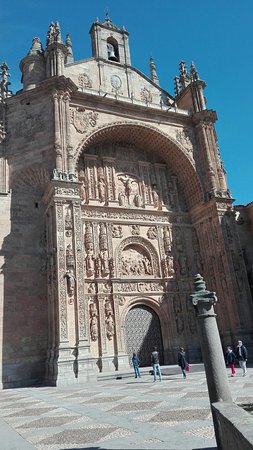 Beautiful cloister, interesting frescoes from 18th century, small museum includes bottles from the pharmacy. Although it's open til 8pm you are advised to go in daylight. I went at 6pm and it wasn't really light enough to see the frescoes clearly. the facade is spectacular. 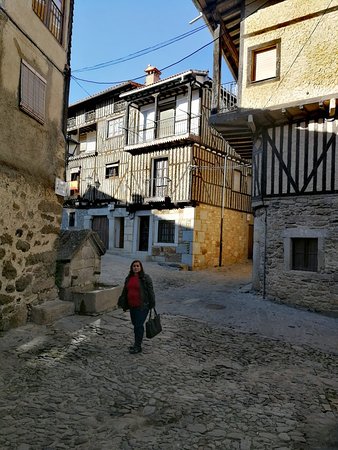 I do not know where the “Downtown” comes from. Much more appropriate would be Casco Historic or Historic Centre
The Lonely Planet Guide to Spain says “this mountainous region with wooded hillsides and pretty stone and timber villages is among Castilla y Leon’s best kept secrets … you could easily spend days exploring .. the pace of life remains relatively untouched by the modern world”.
La Alberca is the main and most visited of the 5 historic villages in the area. Of the others, Mogarraz is best. In fact it is wonderful. It is like La Alberca without any visitors, San Martin del Castañar was next best, Miranda del Castañar was Ok and Sequeros was a bit disappointing.
All three La Alberca, Mogarraz and San Martin del Castañar are very similar, with fabulous narrow lanes full of “gloriously ramshackle” half-timbered houses built of stone, wood, lathe and plaster.
Try to avoid weekends to see them at their quietest and best. 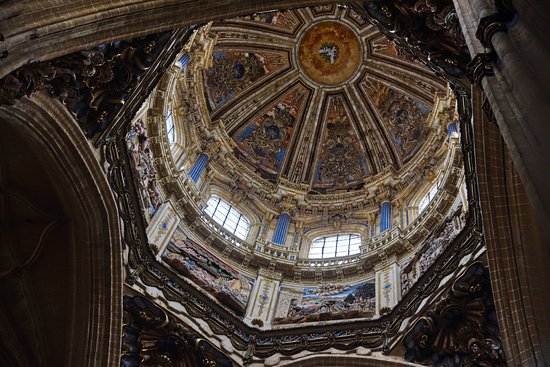 Yes this is a harsh review but this Cathedral is not as inspiring as Leon (with its incredible stained glass) or Burgos ( with its impeccable condition and beautiful chapels). It is a beautiful Cathedral from the outside but we found the inside lacking something. The dome and ceiling are impressive. The okd Cathedral is joined to it and this makes for an interesting visit with much to see. For us, it is worth visiting but I would put it well behind the incredible plaza major and the university in this magical city. 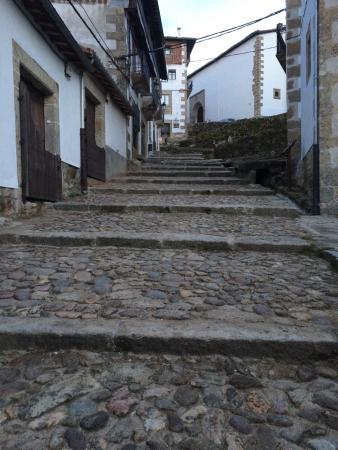 Ooh this place should have many superlatives to describe it. It is a medieval village, authentically maintained and kept petitions. The history is that the locals were and still expert in curing pigs. Look out for the doors outside the houses there is an inner door an then an order half door, which had multi purposes.
One was so that when the animals were herded down the street they couldn't enter homes, second to allow the workers air, as they left the inner door open but locked the outer half door, and thirdly if it snowed you could open the lower outer half to clear the snow. The doors are hundreds of years old, most of them immaculately maintained.
There are open water drains with crisp clear sparkling water running down each street, straight from the Mountains, it can be soothing, but I didn't find it so overnight!
There are many restaurants, but don't appear to be when you first arrive.
Walk around the village to soak in the atmosphere, it is utterly charming and has breathtaking views of snow capped Mountains behind the village.
The thing to eat here is beef or pork as it's all local and first quality.
Not good for those unable to walk or climb some of the steep streets, but if you can, you will not be sorry!
Will be return, we can't wait, it's got to be done before we get too old to walk up and down the many little alleys and roads in and around the village
A gem of a place! 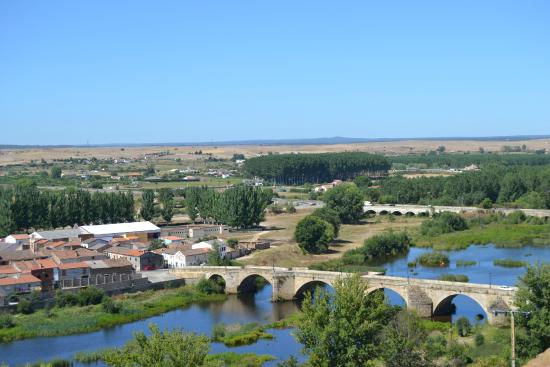 Loved the buildings and architecture of this town. Saw goats being herded down a lane while next to the river fishermen were trying their luck. Easy detour when visiting Salamander. La Alberca is an outstanding and lovely old village, with fabulous narrow lanes full of “gloriously ramshackle” half-timbered houses built of stone, wood, lathe and plaster.
I am not sure whether the narrow lanes or the broader arcaded Plaza Mayor is the highlight but it does not matter as the whole palce is amazing and wonderful.
It also contains cafes and restaurants that can be sat outside to soak in the beauty and the atmosphere