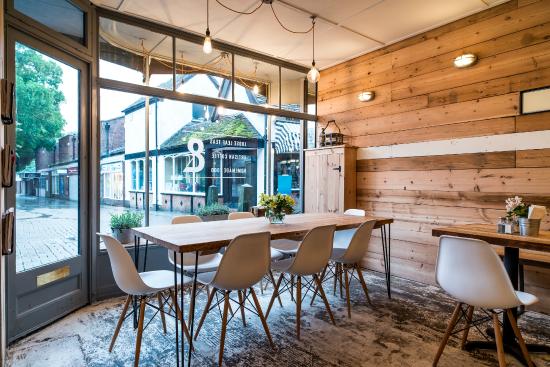 Came here on a Saturday morning with no reservation, so had to wait maybe 15 minutes, but that was fine.Seated and we were served quickly, both ordering the full English and loved it! So delicious and a lovely atmosphere.Would definitely come back, but would try to book. 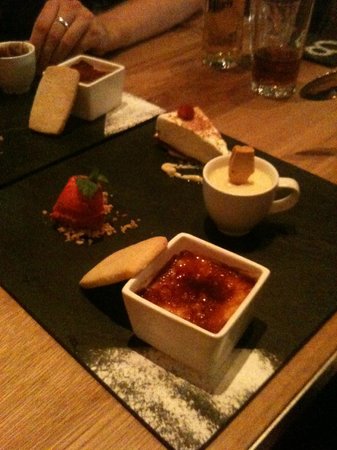 A very popular venue , based in a very large room, no soft furnishings, but even so far less noisy than you might expect. The proprietors have wisely avoided cramming tables too close together, so that the room at least feels infinitely less crowded than it regularly is.Sunday lunchtime is heavily reliant on standard roasts: three options, each rather curiously - including chicken - served with Yorkshire pudding. Whilst all three meets were impressively good, and not overcooked, the vegetables were very limited, both in scope and quantity for four people. And the very overcooked cabbage can best be described as "reminiscent of school."Good ambience, but only okay food.Hi Andrew, Thank you for taking the time to leave us this review. You feedback is invaluable to us and will be shared with management and the kitchen team so we continue to develop to improve the quality across all areas.We hope to see you again soon

8. The George and Dragon Graveley 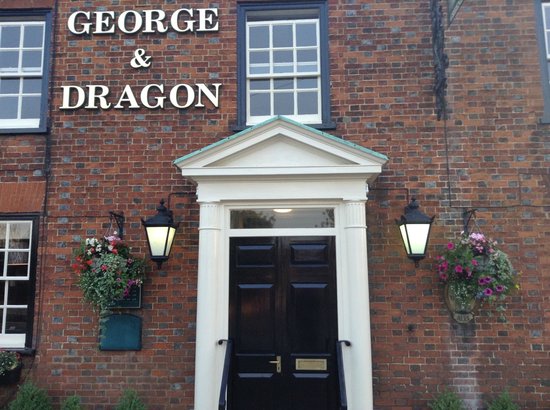 In the heart of the picturesque village of Graveley, the George and Dragon invites you to get away from it all. Enjoy high quality delicious locally sourced and freshly made dishes in a cozy country pub setting. With family and dog friendly dining indoors

We have been in for drinks a few times since the new tenants took over the running of this lovely village pub/restaurant, and now the refurbishment is complete we decided to call for food.So we visited Tuesday evening and were certainly not disappointed.Greeted by the new landlord with a smile and a welcome, taken straight to our tables where he took our drinks order, and gave us the menu.Our drinks arrived and our food order was taken, soup for myself and the crab dish for my wife. Both were delicious.I had the lamb burger and my wife the veggie burger for mains, served with skin on chipped potatoes and homemade slaw. We couldn't manage a dessert !.All excellent. We then retired to the bar with another round of drinks.Must mention our waitress, who was attentive, pleasant and efficient, as if things mattered to her rather than we just dealt with 'as a matter of course'The refurbishment looks good, particularly the bar area, the place gives you a feeling of "going out" for the evening which we like. The staff were friendly.The drinks range is extensive, nice house wines, and a choice of ales on the hand pumpIn all, a lovely evening out, good food, reasonable prices, friendly service. We will be back.Thank you so much for your very kind words. We do try hard to make every single guest feel welcome and take feedback to heart. It was a pleasure hosting you and we look forward to seeing you again soon. 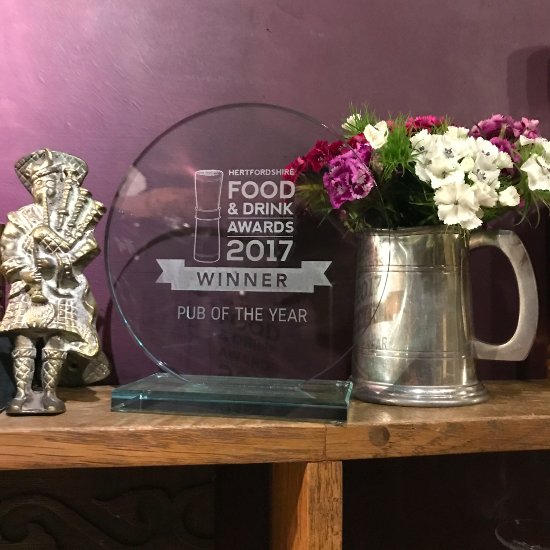 We decided to try somewhere different to celebrate our sons birthday as we have probably ate in every other restaurant in Hitchin throughout the past 20 years.On arrival we were greeted by a friendly waitress, and overall looking and listening to what was happening around us everyone appeared happy and indeed all of the staff looked very attentive and friendly to their guests.We decided to share some of the starters and the portions we very good, no one was left feeling they hadn't had enough. The quality of the food was equally very good.I wasn't feeling the best having just got over losing my voice, so only had a glass of the house white and my daughter had a glass of house red. I wouldn't say that the wine choice was the best decision I ever made, but it was drinkable. So I would advise that you spend time chosing a nice bottle of wine.My sons and husband chose the steak and they ate everything in the plate, they really enjoyed their meal. My daughter and I chose the pork chop, which I have to say was also a great choice. The flavours were excellent and we both ate everything (except for the bone!!)Only a few of us had dessert because the portion sizes were too big for me to move onto a dessert at the endOverall this restaurant /pub is a lovely place to eat amongst friendly attentive staff. I would certainly go back again and would therefore recommend that you try it next time you are in Hitchin. It's the perfect place to refuel whether you're popping in for breakfast, brunch, lunch or dinner, all freshly prepared, with a hugely creative drinks list so discerning drinkers can enjoy a range of delicious cocktails, worldly wines and boutique beers.

Kyran behind bar extremely friendly very customer focused brill service recommended what beer on taps I should have which was a success, great tasting! Will be coming again recommend anyone also visiting to get served by this guy Dear Toddbrewer,We're pleased to hear you've had a pleasant experience with us and will forward your positive feedback to Kyran. We hope to see you back for our new drinks menu launch next week!

9 Things to Do in Hitchin That You Shouldn't Miss 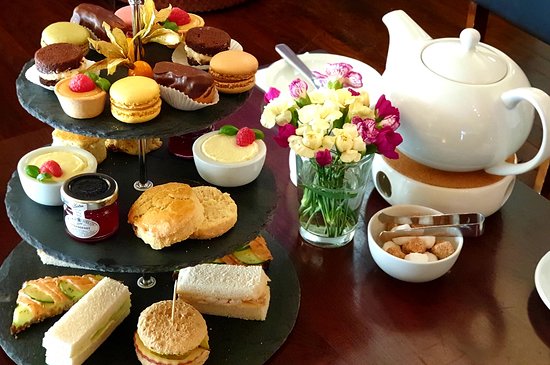 The Orchard Fairfield Restaurant and Bar is situated within the historic setting of Fairfield Hall and surrounded by the picturesque Bedfordshire countryside. With its Victorian architecture and relaxed atmosphere the restaurant enhances the experience of

I visited the orchard for the first time today with girl friends on a spa day and I would definitely return and recommend to others. Mimi and Ann were really friendly and helpful with allergies and dietary requirements in the group (thank you) and the food was delicious. Best veggie burger Iâve ever had! Thank youThank you!We try really hard to cater for all tastes and take allergies extremely seriously, So glad you enjoyed your day, and thank you for mentioning our lovely ladies, we are all equally passionate about our restaurant, and love to hear positive feedback, it makes our day!we hope to see you again soon,Kind regards,Joy and the team 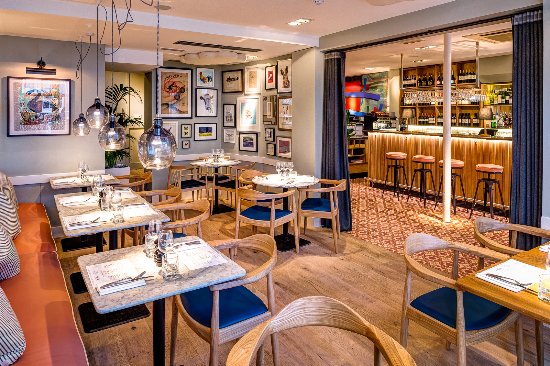 Centrally located in a partially grade II listed building just off Market Place in this historic town, Lussmanns Hitchin is the locals' fish & grill restaurant. Proudly independent, we bring ethical and sustainable dining to the high street. Dining is rel

Annual visit to Hitchin and this has to be the restaurant of choice. Again, an excellent meal. My wife had a Vegetarian option and I opted for Plaice with Prawns and a Spinach side dish. Arguably a little expensive compared with many restaurants but, in truth, value for money.Thank you for your review and feedback. Great to hear that you enjoyed your meal with us and you found it value for money. I hope that you choose us again next year. Kind Regards, Laura ([email protected]) 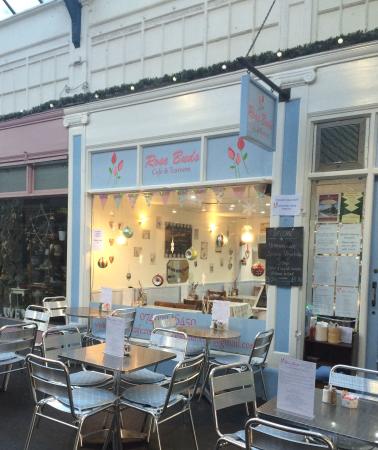 A vibrant vintage cafe and tearoom located in Hitchin's historic Arcade. A wide menu full of freshly prepared and homemade food. We also have a selection of fresh homemade cakes for you to indulge in. We offer a selection of loose leaf teas, fruit teas &

We hadnât been to Rose Buds for a while and having been, canât think why! While our grandson slept we popped in for refreshments and a yummy bacon sandwich. The staff were very friendly, welcoming and attentive. Complete with rain predictions! The place was very clean, the food first rate and the prices reasonable. Well worth a visit, we certainly wonât leave it as long next time. 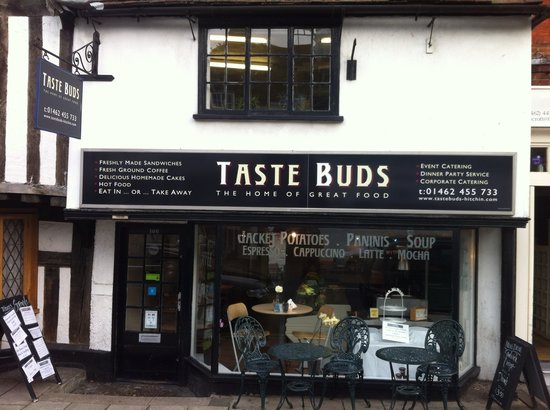 Taste Buds is a friendly, cosy deli cafe located minutes from Bancroft Park in the heart of Hitchin, also providing catering for local businesses and private functions. Perfectly placed on one of Hitchin's busy shopping streets, Taste Buds is the perfect

Came here yesterday. The decor is okay but the seating is very cramped. I had the lasagne which tasted fine, a tiny bit lukewarm. The prices were fine

Where to eat American food in Hitchin: The Best Restaurants and Bars 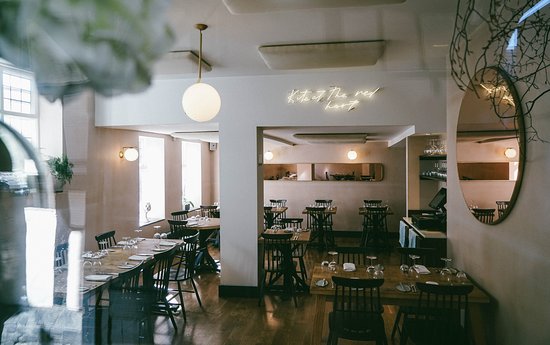 Kite at The Red Hart: vibrant bar and restaurant led by craft beers, original cocktails, casual dining and a packed events calendar. We serve lunch, dinner and Sunday roasts throughout our venue alongside a busy bar with contemporary decor.

Love the down stairs restaurant, furniture and music to a beautiful dinner with my husband. Every dish was delicious and we loved the little complimentary dishes from the chef really nice touch. The night shift cocktail was soo good I skipped dessert to have another! Can't wait to return and bring the family Hi Jadie,Thank for joining us in our restaurant for dinner!We are thrilled to hear you had such a great experience with us. Glad to hear you love our Nightshift as much as we do!We look forward to your returnBest wishes,Laura