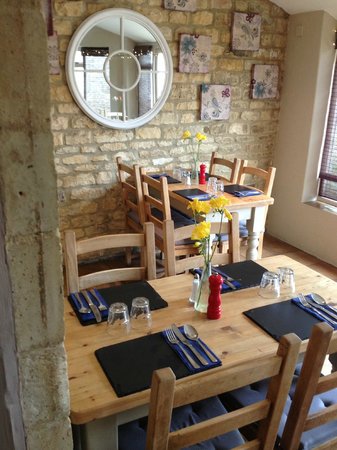 They catered for 8 of us and the service was very good. The food was excellent everyone enjoyed it. Would recomend to book in busy times.

Sheep on Sheep Street has a seasonal menu based around the woodfire oven which features in the centre of the restaurant. On the menu are gourmet southern Italian-style wood fire pizzas. The Sheep welcomes families with a bespoke children's menu available

This is certainly an easily missed restaurant, although it is situated at the main street and almost directly opposite the famous Porch House. The restaurant is modern, very clean, tidy and feels airy and bright. The reception was warm and friendly and the service staff was also freindly and helpful. The menu is mostly Italian fares. The food take some time to arrive but that is okay because when it came, they were simply marvellous. Not only the food presentations were beautifully done, they even taste so delicious.

3. Osteria on the Wold Very small and cozy restaurant in the courtyard behind the Talbot. Had two fabulous meals here during our stay. First night we had the lobster ravioli which was a triumph, preceded by sharing calamari and prawns both dishes were lovely although the prawns were in a jus, that was a little tasteless. Nevertheless the prawns were delicious. Great to see one of our favourite wines on the menu too.... Passimento, a little expensive at Â£25 for a bottle you can by retail at Â£10, but hey they have to make money somehow! Give it a try, you wonât regret it. Overall nice little place, good food and nice people.