Where to Eat in Arkhangelsk: The Best Restaurants and Bars

Arkhangelsk (Russian: Арха́нгельск, IPA: [ɐrˈxanɡʲɪlʲsk]), also known in English as Archangel and Archangelsk, is a city and the administrative center of Arkhangelsk Oblast, in the north of European Russia. It lies on both banks of the Northern Dvina River near its exit into the White Sea. The city spreads for over 40 kilometers (25 mi) along the banks of the river and numerous islands of its delta. Arkhangelsk was the chief seaport of medieval and early modern Russia until 1703. A 1,133-kilometer-long (704 mi) railway runs from Arkhangelsk to Moscow via Vologda and Yaroslavl, and air travel is served by the Talagi Airport and a smaller Vaskovo Airport. As of the 2010 Census, the city's population was 348,783, down from 356,051 recorded in the 2002 Census, and further down from 415,921 recorded in the 1989 Census.
Things to do in Arkhangelsk This restaurant is in the lobby of the Pur-Navolok Hotel, so it's certainly convenient if you're staying there. We ate there twice: once for lunch and once for dinner. Both times the restaurant was nearly empty, so it was easy to roll in and grab a table.
The food was pretty decent. Not something I'd rave about, but fresh, well-cooked, and well-presented. We had some good caviar, a couple soups (one of which was great, the other so-so), a good salad, and OK mains.
The prices were OK by American standards, but a bit on the high side by local standards. I guess a fair summary here would be that I liked the food just fine, but have had similar fare in a cafe for 1/4 the price.
And I guess I'm not quite sure what one gets for the additional price. The decor (which I don't really care about, truth be told) is, I think, striving to be "sleek modern haute cuisine," but winds up looking a lot like "church wedding reception." The wait staff was good, and the menu in English for a touristo like me, but these are minor things.
A real downside was the wait times involved. We were in no hurry, so it didn't bother us, but wow, our lunch was 2 hours long as each dish was brought out one at a time. It's like the timing is for a super-exclusive high-end restaurant, but it doesn't really *look* like one, so it's a little disconcerting to glance at your watch and realize it's already mid-afternoon. 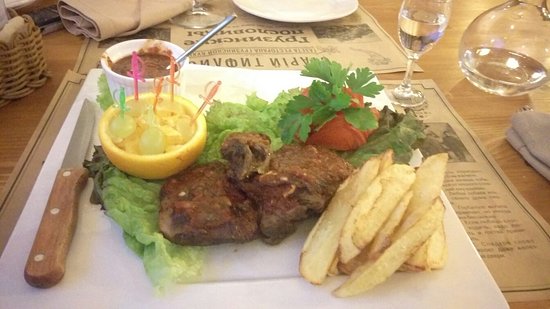 A place with character, well-trained and friendly staff, and of course fantastic Georgian food. No English menu so had to translate for my comrade, but the menu in Russian had pictures next to each dish, making the job slightly easier. Very clean. The waiter called us a taxi at the end of the meal. 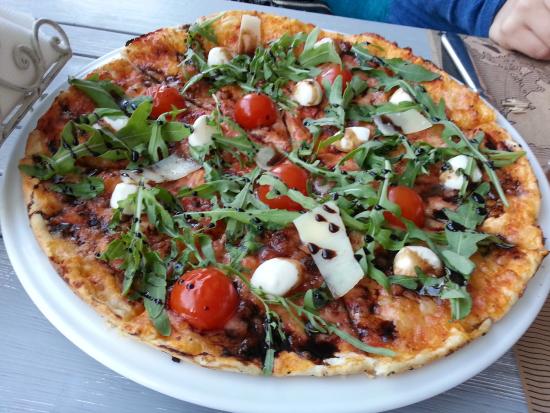 My wife and me prebooked for one of the specialty jazz nights (8 July 2013). Tickets were 600 Rubles each for a seat near to the band. We arrived at 7pm as instructed.
The main courses were served with the first plates, so the mains were cold by the time we were ready to eat them. The chicken I ordered for the main course was overcooked and dry. My wife ordered chicken cutlets, but neither of us could find any trace of chicken in them - they tasted of pork. We had a botttle of chardonnay with the meal. This was cool but not cold.
The jazz was not great, and the young girl singer had a weak voice. Therefore her voice was inaudible for much of the show as her father's guitar playing overshadowed her.
After the main course we fancied another bottle of wine and a dessert. I ordered in Russian. My wife who is Russian was pleased that I had ordered in "good Russian." We both fell about laughing when our waitress brought the bill instead of the wine and the dessert menu. My wife remonstrated with her. The dessert menu was neglibile so we just had the second bottle of wine.
Overall we found the place too hot to be comfortable. No AC switched on despite high temperatures outside and a large crowd inside.
The final bill for two starters, two mains and two bottles of mediocre wine was 3050 Rubles (plus the 1200 Rubles for the jazz) - Oh, and the jazz ended at 9.30 pm!!! 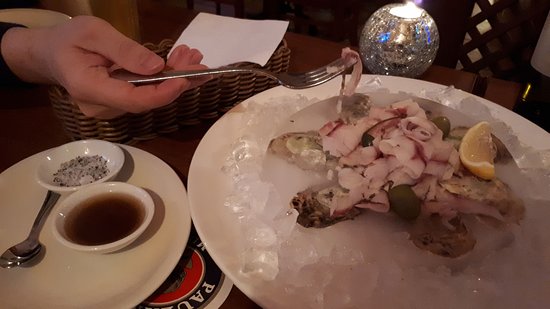 I ate at El Fuego a couple of times on a recent business trip. Fortunately this was during the summer months so on both occasions it was outside.
The food was very good on both occasions (the menu is translated to English), probably the best I tried in the city. My colleague said his meat dishes were certainly the best he'd had.
The service was excellent the second visit, but unfortunately on the first visit the waitress got my main course wrong.
The restaurant serves very good German beer, but it is a tad pricey. 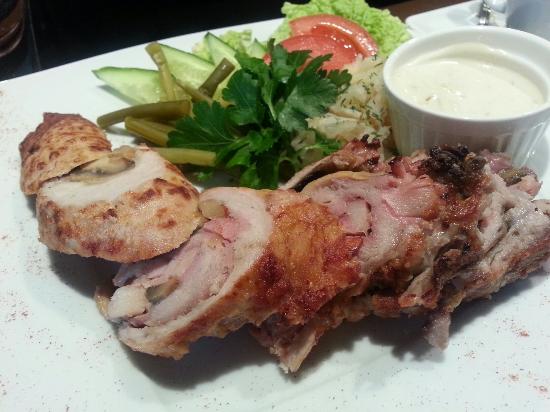 Small cosy pub in the center of Arkhangelsk. English ales and stouts, Czech and Russian draught beer. Russian and European cuisine. Sport translations. Brunch from 12 to 15.

English-themed pub with great choice of beers. Beers are well kept and properly served. As an Englishman I feel well qualified to judge! The seafood was very good although the chips were disappointingly soggy. Good service and an ambience that made me feel at home. 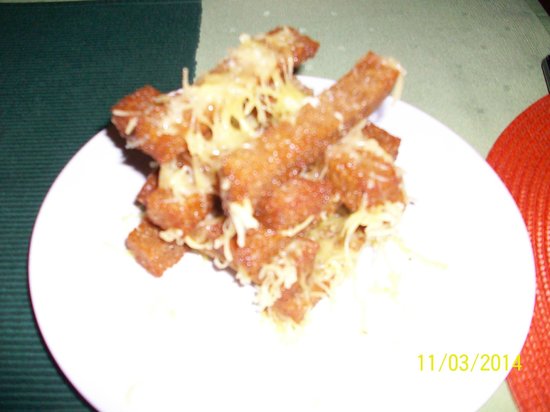 The restaurant offers plenty of typical Czech dishes although not everyting on the menu is available, so better check with the waiter before ordering. There are several choices of beer on tap, and the decor is pleasant. Service can take time, we waited more than an hour for our dishes, but it seems like everything is freshly made and tastes good. So, well worth waiting assuming there is no hurry to have food. Good location on the pedestrian street. 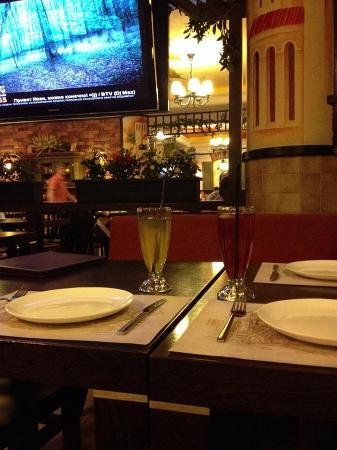 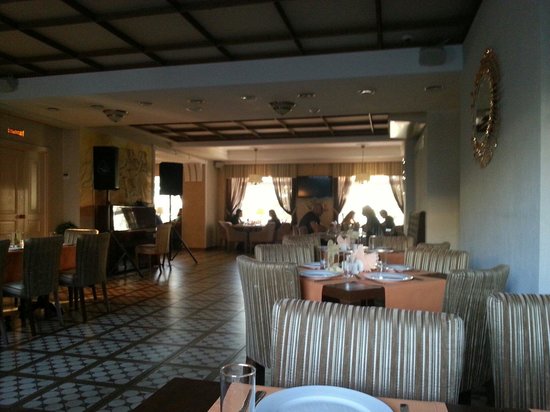 While on a cruise to the White Sea my wife and I were taken to the Barolo Restaurant on the waterfront in Arkhangelsk. We were in a party of about 30 other passengers from the Ship. The guide said that we had 50 minutes in the Restaurant. In that time we were served 4 courses. All excellent food plus a soft drink ,and tea to end the meal. I have never before experienced such efficient service. The Restaurant is modern, and the staff very friendly. Well worth a visit while in the interesting Russian city. 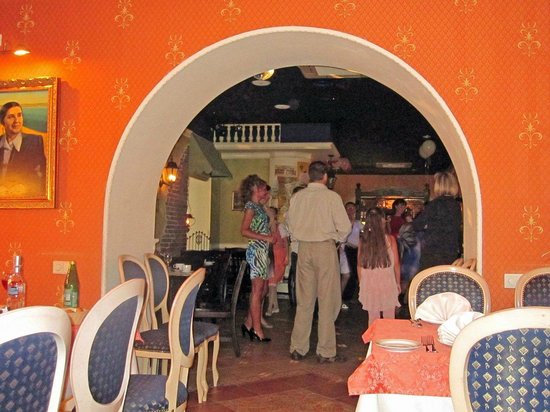 We went on 14 July 2013 to celebrate our wedding anniversary. The starters were great and served quickly. However, the main courses were not so good. My duck was overcooked and the potatoes and mixed vegeatables were very undercooked. My wife made similar observations about her food. The waitress was attentive and prompt. We also liked the two singers who sang to the prerecorded music. Good dance floor. 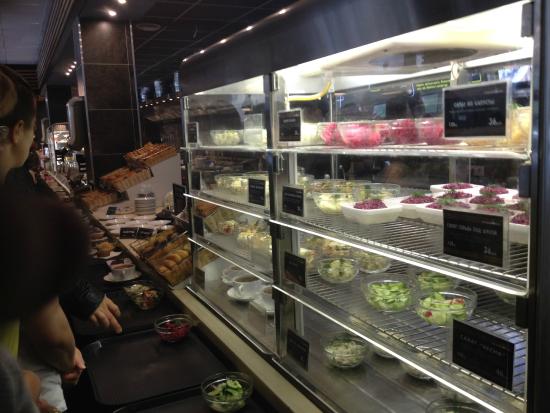