Top Things to do in Siasconset

What to do and see in Siasconset, United States: The Best Places and Tips

Siasconset is a census designated place (CDP) at the eastern end of Nantucket island, Massachusetts, United States with an elevation of 52 feet (16 m), and a population of 205 at the 2010 census. Although unincorporated, the village has a post office, with the ZIP code 02564.
Restaurants in Siasconset 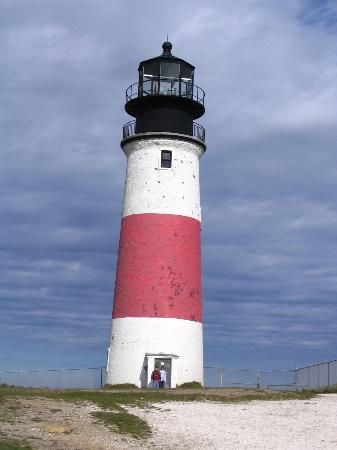 Built in 1850, this distinctive brick lighthouse stands on a bluff 90 feet above sea level.

We went out to the lighthouse and spent a bit of time just strolling around the grounds. Interesting historical information and a stellar view. 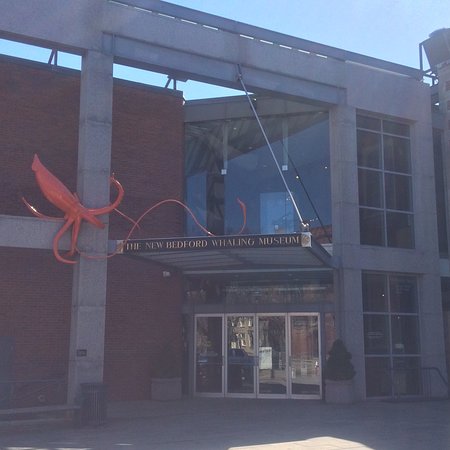 Restored in 2005, the Whaling Museum features top-quality exhibits and galleries, as well as daily programs and tours that bring to life the history of this magical island. The museum is home to a 46-foot sperm whale skeleton, a restored 1847 oil and candle factory, and countless Nantucket artifacts and treasures. A relaxing, fully-accessible rooftop observation deck offers stunning views of Nantucket harbor.

The Whaling Museum is very informative and well work visiting. Plan to spend +- an hour there. Perfect for rainy days. 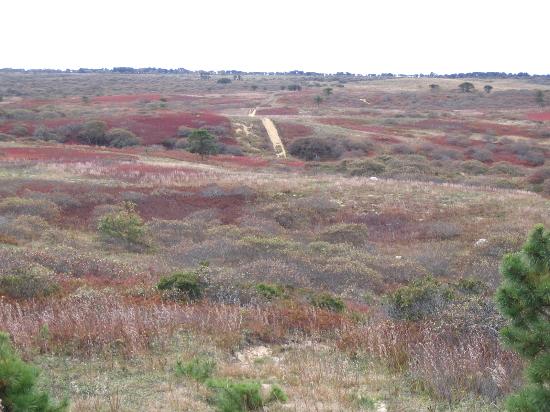 A trip to Altar Rock provides terrific views of the moors of Nantucket, the inner harbor and the northern part of the island (Monomoy, Shawkemo and Polpis). It is in Conservation land and has miles of trails where you can enjoy the island's vegetation, while getting some great exercise. 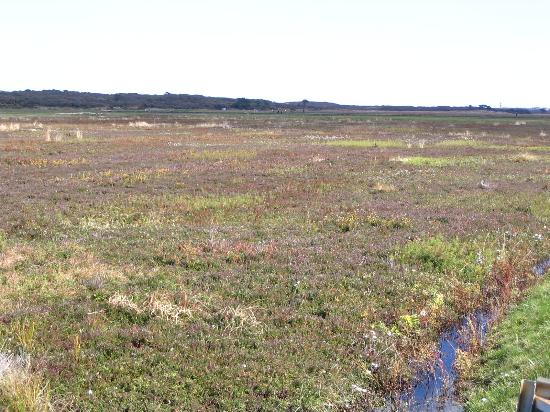 We visited during their cranberry festival.

You were able to walk into the bogs (along the roads through the bog). There were cranberry bushes (photo#3). They flood the bog to make the cranberries float for harvest (photo#4 & #5).

It was neat to visit a cranberry bog (photo#6).

My only complaint was that the festival wasn't very organized as far as times and locations. A ranger was suppose to give a guided tour of the bog every half hour. We waited 15 min and he didn't show. We asked the lady behind the table again and she said to go look for him, we exited the tent and waited in the spot she said to and he never arrived. No one was dressed in the hat and vest she said to look for. So we ended up giving up and walking the bog ourselves - like everyone else was doing. We sure would have loved to hear the ranger's talk on the history of the bog & the machinery! 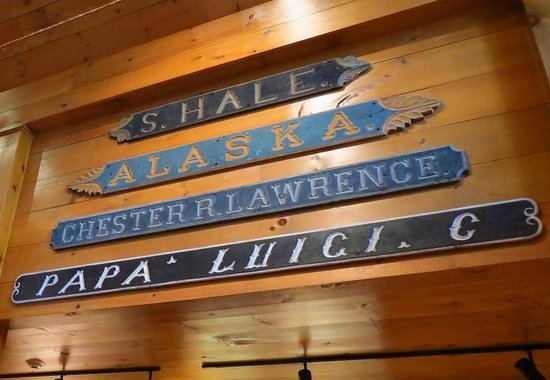 In the 19th Century, hundreds of ships passed by Nantucket Island each day, all navigating without the benefit of modern nautical technology. Unpredictable storms, dense fog and strong currents often caught even the most experienced sailors off guard. Treacherous shoals and inclement weather led to over 700 shipwrecks in the surrounding waters of Nantucket, causing the area to be dubbed "a graveyard of the Atlantic."The Nantucket Shipwreck & Lifesaving Museum preserves the memory of those Islanders who risked their lives to save shipwrecked mariners. These men served in organizations devoted to maritime rescue, such as the Massachusetts Humane Society, United States Life-Saving Service and the United States Coast Guard.The Nantucket Shipwreck & Lifesaving Museum is located at 158 Polpis Road, just 3.5 miles from Nantucket Town. The museum can easily be reached by car, NRTA Shuttle/Polpis Route or by the Polpis Bike Path. We are open from Thursday, May 23 through Columbus Day, Monday, October 14, 2013 from 10:00 a.m. to 5:00 p.m. daily. Admission costs are free for members, $6.00 for adults, $4.00 for youth 5 - 17 and free to children under 5. The Nantucket Shipwreck & Lifesaving Museum is proud to be part of the Blue Star Museum program that offers free admission to active duty military and their families.Come visit the Nantucket Shipwreck & Lifesaving Museum and enjoy guided tours, films, new exhibits, family-friendly programs, special events and more, designed to appeal to all ages.

Ghost tours are fairly easy to come by in most cities in America - but absolutely none of them can compare to being thrilled by a master storyteller aboard a real working tall ship, surrounded by dark waters and starry skies!

Two weeks ago I had the pleasure of taking part in the launching of a new program from Egan Maritime & the Shipwreck & Lifesaving Museum. Orion Couling was our guide for the evening and every story was fun, chilling and informative. It is clear that Mr. Couling feels passionately not only about maritime history in general but the history of Nantucket Island specifically. He had his audience enraptured from the moment we stepped onto our launch to the final departure of the evening.

Whether you are an avid supernatural believer or just enjoy a good tale, this is the tour for you! Mr. Couling balances his stories out with enough history and legend to please anybody. He brings a sense of integrity to his narrative that is sadly lacking in many other such tours. He even changes up his stories each night depending on certain bottles that are selected from his chest of items (kids especially will enjoy this interactive experience).

This tour is quickly becoming a "MUST DO" on the island. Don't miss your opportunity to take part! 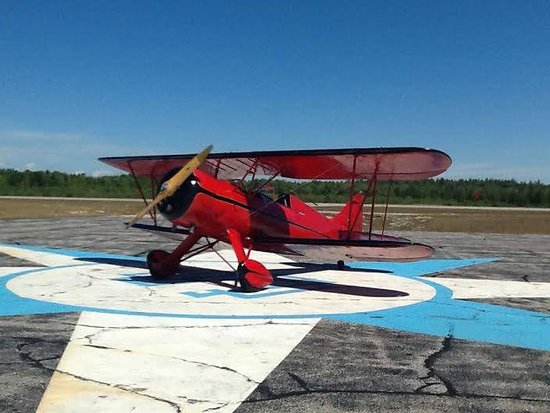 Big wide beach with ample parking and restrooms. A beautiful and clean place to sit and enjoy the sand and sea. You can walk endlessly in either direction or just dig your toes in the sand. 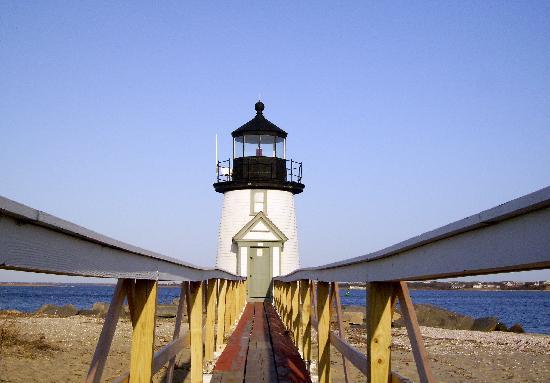 Established in 1746, America's second oldest lighthouse has been in service more than 250 years.

Beautiful lighthouse on the tip of the island is a must see. When I was there, a couple was taking wedding photos - special place! Coast Guard station is down the street. 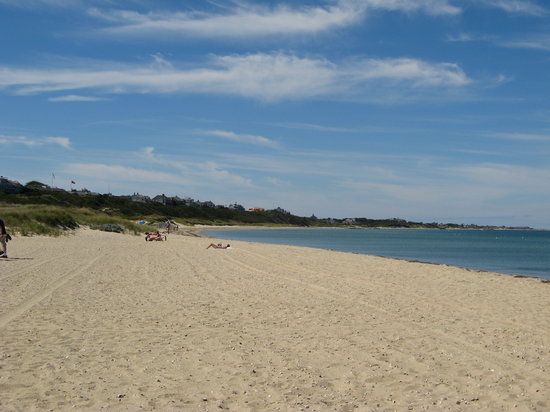 The best island beach within walking distance of town, Jetties is ideal for kids.

Jetties Beach is a nice place. The proximity to town makes this a go to place. We rode our bikes here and locked them up in the bike racks. The blue carpet pathway up to the beach is helpful. The sand is soft and fun to play with. It does have lots of dried seaweed and broken shells thoroughly mixed in with the sand. The shoreline and jetty are my favorite part of the beach. The jetty reaches way out into the ocean and acts like a breaker. At the same time, the water is fairly shallow. You can walk a long ways out into the ocean. It makes a very nice play area. The lack of waves means you are not pounded every 15 seconds as the next wave breaks. It really is a nice beach.

As an added bonus, there is a bar and restaurant several hundred feet from the beach. Chaise Lounge chairs are set up in the sand with a few picnic tables. There is a covered patio and restaurant with music filling the air. If you choose not to bring your own food, you can run to the restaurant and pick something up. Heading back to town is a quick option too. On the other side of the parking lot from the restaurant is a kids playground. It's fairly simple, but there were kids from the beach playing on it. 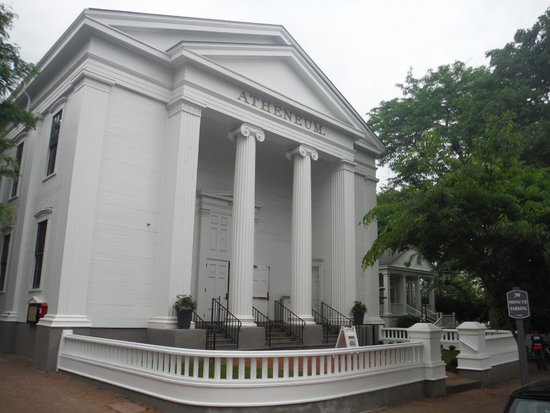 The Nantucket Atheneum is the public library for Nantucket, Massachusetts. The institution was formed in 1834 as a private, membership organization and became a public library in 1900. The Nantucket Atheneum offers free access to millions of books, films and music as well as over 1,000 programs for all ages year round. Our iconic building, built in 1846, is located in the heart of downtown and features art and artifacts important to the island's maritime history as the center of whaling. The library also provides a free wifi signal, computer access on the second floor and a beautiful, inviting garden.

This was a great stop...I love visiting local historic libraries and this one was special, especially the children's room. Very nicely done!