Top Things to do in Catbalogan

What to do and see in Catbalogan, Philippines: The Best Places and Tips

Catbalogan, officially the City of Catbalogan, or simply referred to as Catbalogan City, is the capital of the province of Samar, Philippines. According to the 2015 census, it has a population of 103,879 people.
Restaurants in Catbalogan 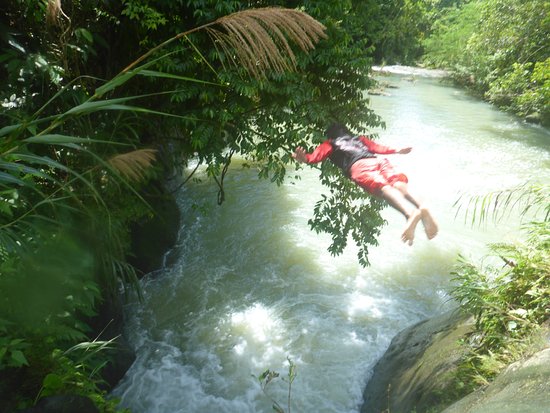 This is a hidden gem in the middle of Catbalogan City! It's off the beaten path and it's a well-kept secret by the locals.
To get to the top most falls you would have to trek for about an hour. Just follow the pipeline and along the way you will encounter the locals with heavy rattan baskets on their back laden with produce. Give them a friendly smile and they will even engage in a friendly conversation with you.
To fully experience Bangon Falls, don't just sightsee and swim. Why not go canyoning?! I booked a package with Trexplore in Catbalogan City (09192943865 / 09276750062 [email protected] [email protected] [email protected]) and Sir Joni took care of everything. From food to Porters to well-maintained outdoor equipment.
For the adventure, we had to rapel down seven Waterfalls and jumped off on some of them. Following the clean river is a nice experience as well. This is the perfect activity for those who are looking for an adrenaline rush!
While you are here, book a caving tour to the recently discovered Central Cave as well! 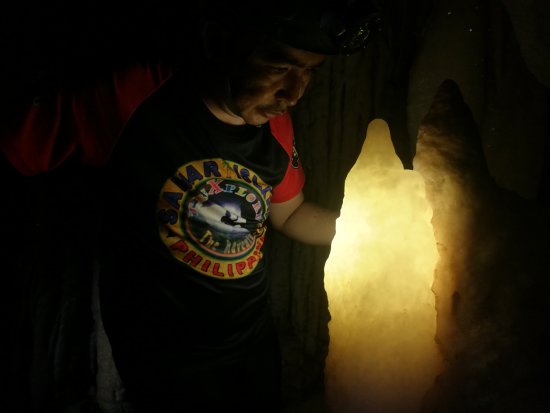 I was overwhelmed with the shining shimmering rock and crystal formations inside this cave. The 3-hour long trek going to the entrance is super worth it! Before you can go inside the main chamber, you have to descend an 18-metre vertical distance which is super scary especially if you have fear of heights but you just have to stay calm and trust the equipment. I did this tour with Trexplore The Adventures in Catbalogan, headed by the cave master Joni Bonifacio. He provides all the safety gears, food, water, permits, Porters, guidance and documentation.You can check their site trexplore.ph
It was raining when we went there but everything was fine. It's a dry cave anyway. 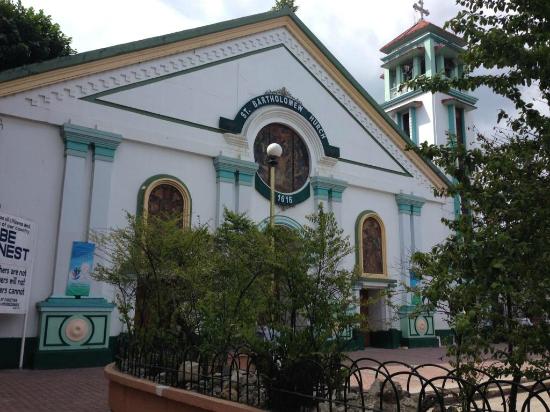 I attended the Sunday 1800 hours Mass that had every pew fully occupied and a few hundred parishioners standing at the side but mostly at the back of the Church.
The front has '1616' in large numerals, indicating the long history of this almost 400 year old Church. It is not as poulent as some other Filipino Churches but at least on the surface appears to be in good condition.
There are food stalls opposite while tens of tricycles and habal-habals (motorcycles) are avilable after Mass to take one around town for as little as P10. 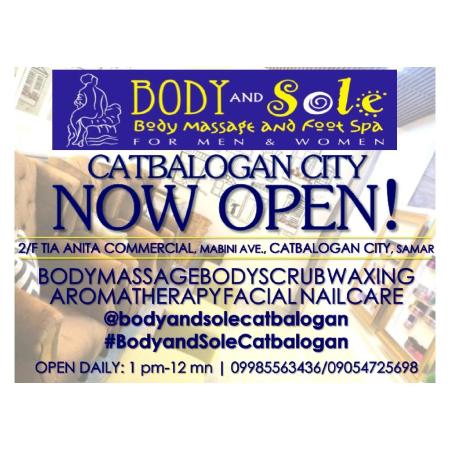 The pioneer spa and wellness center in Catbalogan City, Samar designed to give clients the ultimate pampering experience. We offer body massage, aromatherapy, body scrub, body waxing, facial, foot spa, and mani-pedi services. With the best trained therapists, you will surely have the most relaxing time at Body and Sole Catbalogan! 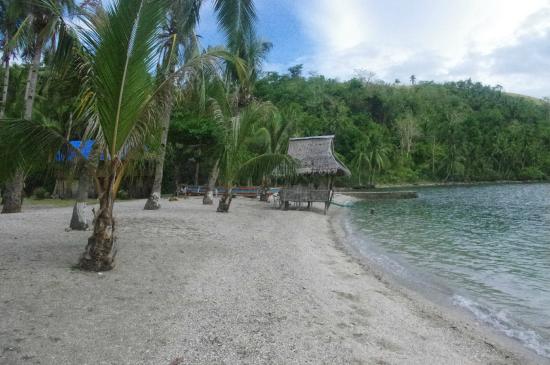 I hired a bangka from Catbalogan's busy fish port. This proved difficult to find at an acceptable price. It was only that I had a Filipino with me that we were able to negotiate a price of P500 each way for two persons in a small bangka.
Boarding involved stepping through another (larger) boat and was not particularly easy, but better than scrambling over rocks that was the initial suggestion of the boatman.
Travelling there he didn't understand that I wanted to snorkel and initially took us to Basciao Island's settlement before being redirected to a small blacky/ whitey mix of tiny corals at Bagatao Island. The trip out therefore took 52 minutes in clam seas but a direct route would have cut that down to 45 or so in calm morning seas, the recommended time to undertake such boat trips.
The cove had a caretaker family (parents with shy nine year old girl) along with three dogs and a rooster, mother hen and chicks plus their house and a good shoreline nipa hut. We were charged P200 to use the nipa hut.
Water visibility was poor as were fish numbers although eventually I saw a school of 30 or so small fish that blended into the rocks and coral making photography difficult.
The bangka back to Catbalogan took 51 minutes, again in quite calm seas.