Top Things to do in Keokuk

Top 9 Things to do in Keokuk, United States

Keokuk /ˈkiːəkʌk/ is a city and a county seat of Lee County, Iowa, United States, along with Fort Madison. It is also the southernmost city in Iowa. The population was 10,780 at the 2010 census. The city is named after the Sauk chief Keokuk, who is thought to be buried in Rand Park. It is located in the extreme southeast corner of Iowa where the Des Moines River meets with the Mississippi. It is located at the junction of U.S. Routes 61, 136 and 218. Just across the rivers are the towns of Hamilton and Warsaw, Illinois, and Alexandria, Missouri.
Restaurants in Keokuk 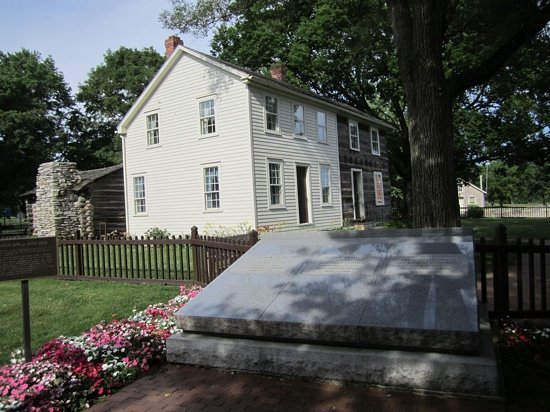 A can't miss site if you enjoy seeing historical places. Numerous buildings that have been restored to their original state filled with period furniture and artifacts, many belonging to the original owners. Not to miss are the blacksmith shop where they give everyone a Prairie diamond ring ( made from a horseshoe nail) and a miniature horseshoe, the Living a Center where they show you how ropes and barrels are made and demonstrations on bread and candle making as well as weaving, spinning and using a loom. The tin shop and gun shop and post office are also interesting. Be sure to pickup free tickets for the nightly play "Rendezvous in Old Nauvoo" 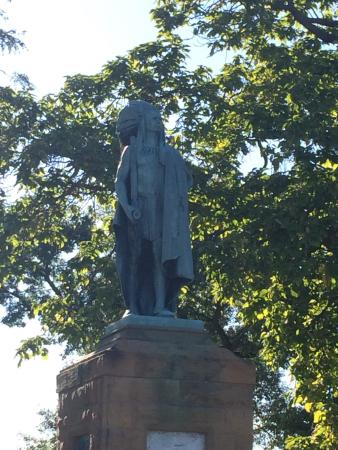 Not sure what the couple was doing in the car that was parked near the monument, but sounded like they were having some excitement. Not a good example for children. Not sure what the smoke coming out of the windows that were open!! But the park was very well kept up. Beautiful Eagle carved atop a tree.

Wildcat Springs, a spacious and sprawling tract of land, is located on the north side of Hamilton, Illinois, just across the Mississippi River from Keokuk, Iowa. It has been a popular recreation area since the 1880's and remains so today with camping, hiking, and picnicking facilities. Chaney Creek, which flows through the park, is a popular place to hunt for geodes.

The only items I wish they would incorporate are city sewer hook-up, shower house/toilets for the campers. There is sand volleyball, a wonderful city pool, three playgrounds, shaded campground with electric and water hook-ups. There are three short walking trails and two walking bridges. Also, there is a ball field and two shelter houses.

Our grandkids enjoyed it so much, they want to go there often. 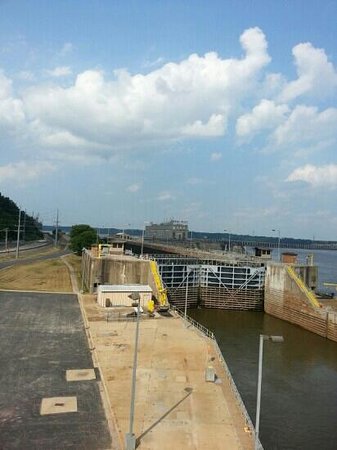 I've been traveling the Mississippi River, visiting as many locks and dams as public access allows. Here in Keokuk, the view is kinda great from the Observation Deck (a decommissioned roadway with an in-service rail freight line beneath it), but it would be better if we could get closer, if the lock offered a regular tour day. It's pretty unique though with the power plant up river from the Bridge and the old toll house at the approach. We actually came here twice - in the evening and then in the morning. There's also a park down below for fishing and more ogling the tow traffic. 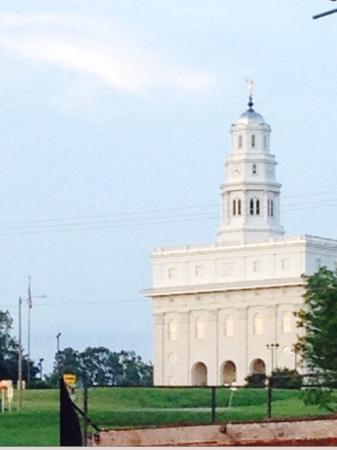 Our large group of 200 were all able to attend a session in the temple. We scheduled it at least 6 months in advance. Bro. Marshall is fabulous! We took the time to take pictures of each group as they exited the temple. Steamboat built in 1927 that was used to push barges on the Mississippi and Ohio Rivers. The admission price was very low, $4 pp adult. The first part of the tour is guided covering the mechanics of the boat, how steam was used to power everything onboard. The tour guide directed us up some stairs to deck 2 and let us explore at our own pace. Deck 2 was the crew quarters and galley with a lot of old photos and various documents telling the history of the steamboat days. This steamboat was decommissioned in 1960 but had plied the river from 1927 until then. The galley had been updated with modern appliances, counter tops and sink during the 50's if I had to guess. Deck 3 was smaller than deck 2, but there was still a lot of photos and documents to browse. The pilot house is on top of deck 3 and one could sit in the pilot's chair.

Reviewed By WStatesTraveler - The Netherlands

The Keokuk National Cemetery dates back to the Civil War. A place to pay respect to those who served the US in the wars that followed. Of particular interest are the monument dedicated to the Unknown Soldier and the monument of President Lincoln's Gettysburg Address.

Keokuk, Iowa is packed with mansions dating back to the Civil War era. Among them is the Grand Anne. It was built after the Civil War but the surrounding town is full of history. If you travel to the Grand Anne be sure to schedule a tour with Rick the owner. He and his wife Critia have a beautiful bed and breakfast. The main level has quarter sawed oak, tiger stripe maple, pear, and cherry wood work. It is in remarkable condition considering that the home is 116 years old. the Grand Anne is listed on the National Historic Register. Rick has studied the history of the city and is happy to share that knowledge with you. Keokuk has the only National Cemetery in Iowa. It has 61,000 Union and Confederate soldiers buried there.

The Keokuk Area Tourism Bureau & Visitor Center welcomes travelers to Southeast Iowa and assists them with their travel needs to insure an enjoyable stay in the Keokuk, Iowa area.