Tigard /ˈtaɪɡərd/ is a city in Washington County, Oregon, United States. The population was 48,035 at the 2010 census. As of 2007, Tigard was the state's 12th largest city. Incorporated in 1961, the city is located south of Beaverton and north of Tualatin, and is part of the Portland metropolitan area. Interstate 5 and Oregon Route 217 are the main freeways in the city, with Oregon Route 99W and Oregon Route 210 serving as other major highways. Public transit service is provided by TriMet, via several bus routes and the WES Commuter Rail line.
Things to do in Tigard 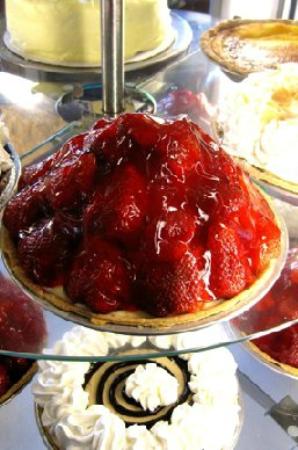 Would have come back many more times of time had permitted! They have amazing pies and cakes on display. Their seven layer chocolate cake is in my sights for my next visit! 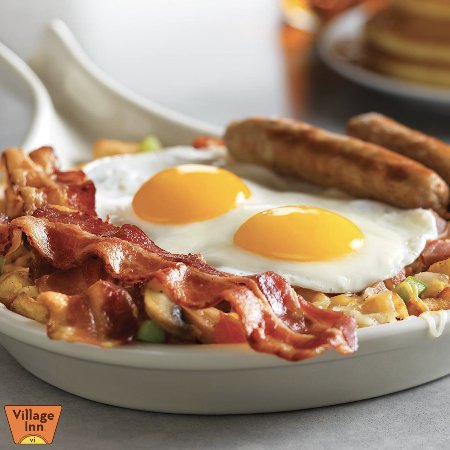 Our breakfast heritage is based on made-from-scratch buttermilk pancakes, eggs cooked any style and a pot of hot coffee on every table. Our guests enjoy our famous buttermilk pancakes, mouth-watering omelettes and other traditional breakfast offerings, including unlimited hot coffee refills. Our skillets, filled with an assortment of tempting ingredients and prepared by the Village Inn Skillet Experts, make us a sought-after destination. Rounding out our wholesome menu are more of the country&apos;s favorite foods. We offer something for everyone . . . fresh green salads, juicy burgers, all-American sandwiches, traditional dinner entrees like Chicken-Fried Steak and well-loved children&apos;s items. We also serve a wide variety of delicious pies--French Silk, Lemon Supreme, Country Apple and Caramel Pecan Silk Supreme, to name just a few.

It was good. Portions could have been more generous, however the food was served hot, the coffee was refilled and it overall a good breakfast at a reasonable price in a comfortable restaurantMichael, Thank you for the review and for the business! -Ryan 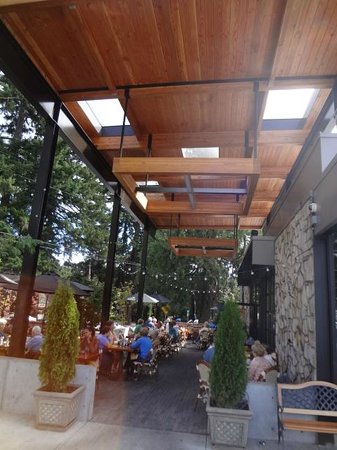 Five of us went for a birthday lunch. One bite of the Alsace omelette and my husband was saying "Mmmm." The same for another family member and the Monte Cristo sandwich. I got the banana french toast and the bread was so delicious I thought it could have been served alone. Four of us got pastries to take home - the spinach and feta croissant was huge and light and airy. The service was excellent. When we arrived we were told there would be a 40-minute wait. It ended up being less than 15 minutes, and we were waited on, served drinks, and received food in very short order. Our server even brought a fruit tart on a plated tray that said Happy Birthday in some kind of fruit sauce at the end of our meal. We were pleasantly surprised at the price - less than $85 for the meal - given the high level of food and service. 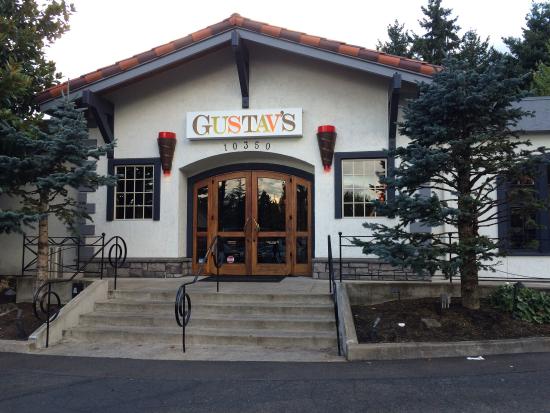 Gustav&apos;s is a favorite for casual dining. Serving lunch and dinner, the menu features a savory array of European and Northwest Specialties to suit any taste and appetite.

We went here on a Sunday evening for the happy hour with a gift card. The hostess was friendly and efficient and we were seated at a very nice table in the bar quicker than the 20 minute wait we were told when we first entered - great. The waitress came over and was quite nice and very friendly. She gladly gave us two samples of beer. I chose a new one, a grapefruit IPA; it was very tasty and down right refreshing, excellent! We then ordered our food. It was delivered by someone else. The waitress NEVER CAME BACK TO CHECK ON US. We had to get up and walk to another server and ask to please send her over. We couldn't get the attention of another server. She finally came over and asked what we wanted: well, a refill on the ice tea for one. ketchup for the fries for another and more food. She brought another ice tea and failed to notice that the water glasses also need filled. When she finally came back with the check and we tried to pay - we were told that our gift card had expired. They had already charged our card for the full amount in the mean time. I was annoyed and told her - "we were told that your gift cards do not expire" (their website clearly states this) and to take it back and talk to her manager. She came back and told us her manager was able to 'push it through' and acted like it was a big favor. This bugged the crap out of me and it was the first time in many years that we tipped less than 18 to 20%. I wanted to talk to the manager but my husband said, 'it's not worth it." I loved the food but it will be a long time before we return again and I may set some things in place with the server before we order. I HATE HAVING TO TRY TO FLAG PEOPLE DOWN TO GET WHAT I NEED, AND WHEN THAT DOES NOT WORK - I ACTUALLY HAVE TO GET UP AND GET SOMEONE- NOT OK! I WAS DIGUSTED WHEN I LEFT. 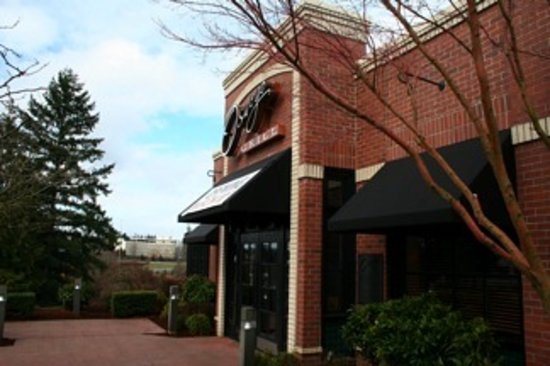 Nice variety of dining options including seasonal specialties. Preparation & presentation were done well. The staff was very attentive and made sure our party was happy with everything. All in all a very pleasant experience.

Reviewed By Linda B - Beaverton, Oregon

Went here for breakfast. Excellent and delicious choices. The place had a wait, but not too long. Our server was great-friendly, personable, attentive, and helpful. A definite change from our last visit here. Got the "Day Breaker" breakfast, with eggs, bacon, country potatoes, butternut squash, delicious crossoint. The other person got "Banana French Toast" with lots of French toast, slices of bananas, white chocolate sauce drizzled on it, candied walnuts. Both meals were so big that we took home half of each. Pastry case was full of yummy pastries and breads. We will return! 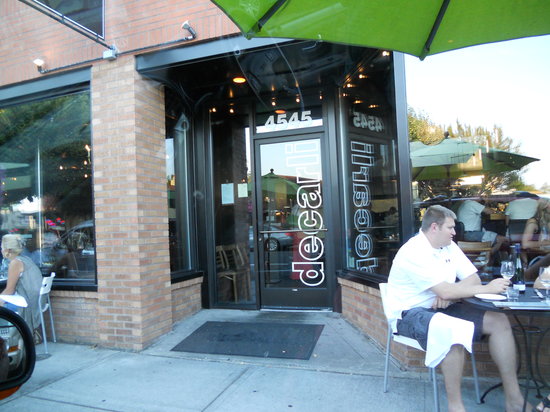 decarli restaurant is where rustic meets modern. Chef/owner, Paul DeCarli, pulls from his Swiss-Italian roots to create a menu that reflects his heritage as well as combine local Northwest ingredients. Polenta fries with gorgonzola butter, mussels in fennel-saffron cream sauce, and espresso-braised shortribs are just a few of the many "must-haves.” Soaring open beam ceilings with rustic brick walls add to the ambiance of this 1924 historic building.

Filet and Tagliatelle delicious! Service delectable! Ambience delightful! I had a lovely evening with my daughter! 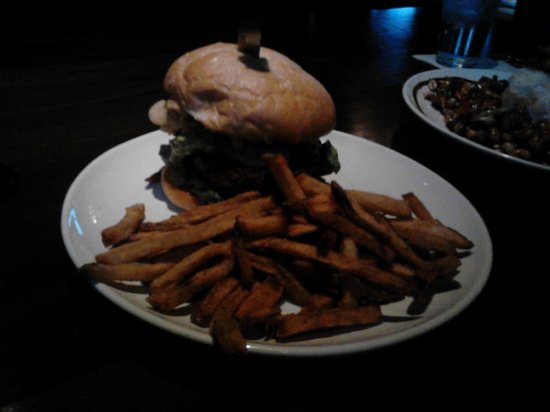 This was our first time at this restaurant on our recent visit to the Portland area. We were promptly seated by a very friendly hostess. The menu is varied and something for every taste including some healthy options. I ordered the chicken curry special and my wife had the southwest salad. Both were generous and tasty. It was interesting that rolls weren't available with the salad. Prices are okay but not sure what the service surcharge is all about. The music is loud and not maybe not to everyone's interest making it hard to carry on a conversation. Service was good but it was obvious our server was covering a lot of territory. 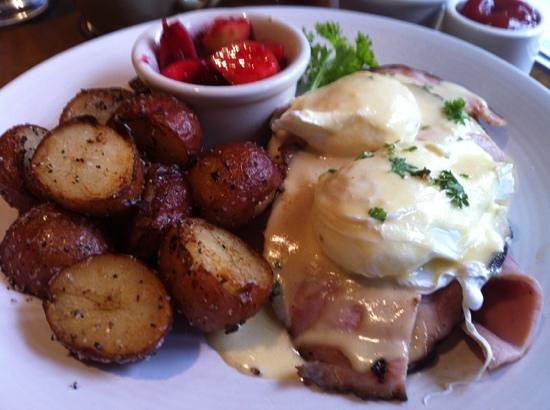 I had the Iron Miner's Breakfast. It was a lot of food. The eggs were well cooked. The bacon had a good flavor. I loved the accompanying gravy. It was quite tasty. My husband ordered sausage and eggs which looked as though they were nicely cooked. I tasted and did not care for the chicken sausage. However, his potatoes were outstanding. They were crispy crunchy on the outside and soft on the inside. My daughter ordered the Granola plate and once again it was a lot of food. The yogurt accompanying the plate was a nice thick Greek yogurt. The fruit ad fresh. She said the accompanying bran muffin was quite good.

The patrons seemed to be drinking a lot of alcohol with breakfast. They set their Spanish coffee on fire before serving it. What a sight! But there were many Bloody Mary's and other drinks being served. Seems to be the place to go for your breakfast alcohol! 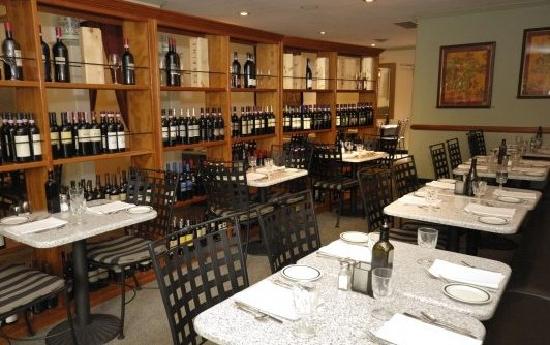 Lake Grove&apos;s finest Italian restaurant, Riccardo&apos;s, has been owned and operated by Riccardo and Georgette Spaccarelli since 1980. Each dish is prepared with the freshest ingredients, and our eclectic wine selection ensures a perfect accompaniment. Come dine al fresco on our stylish patio and enjoy a glass of exceptional Italian Wine.

Roberta and I attended an Olum Bauda wine dinner. Gianni Bertolino traveled from Italy to tell us about the wine. The dinner featured a 5 course meal with the wines perfectly paired to each course. The Braised beef chuck roast was to die for. Of the 3 Barbera d'Asti that we tried, our favorite was Barbera D'Asti, DOCG Superiore "Le Rocchette", 2013. The wine was reasonably priced for a wine of its quality