Top Things to do in Leinfelden-Echterdingen 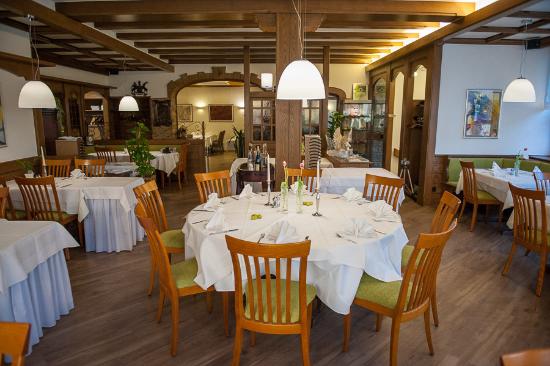 I loved having dinner here. I was in Stuttgart for four nights and had dinner here twice which itself is a good indicator of its good quality and tasty cuisines. They really have good options for vegetarians. Service was also very good. Highly recommended. 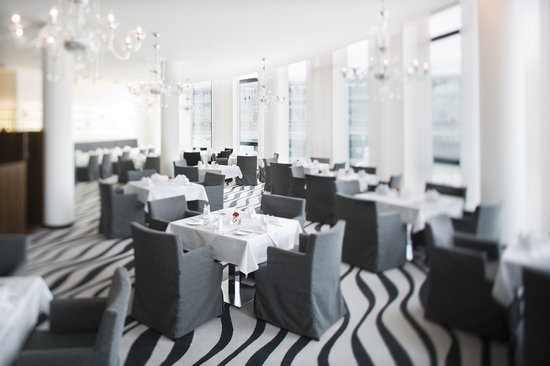 The Trollinger is in the Mövenpick Hotel at Stuttgart?s busy airport. The restaurant has a charming interior décor. There is a successful contrast between modern interior design and traditional chandeliers, creating a stylish oasis of calm. This is a place where you can dine splendidly - and socialise. As you would expect from a Mövenpick Hotel, the cuisine is ambitious offering a mixture of traditional Swiss dishes and local Swabian specialities. Typical dishes such as Maultaschen (a type of ravioli with a meat and spinach filling) or Flädlesuppe (clear soup with pancake strips) are also on the menu. The service is friendly and efficient and offers expert advice when it comes to choosing from the fabulous wine list.

Literally right out of the airport and a quick walk across the street and you are at the hotel.
The rooms are well appointed and extremely comfortable. The bathrooms have heated floors and a nice big shower! You can even open you window in your room to get some fresh air.
Breakfast buffet is fabulous! Every morning a fresh smoothie shot is brought to your table. A wonderful selections of teas and fresh juices. Fresh breads, cheeses, omelet station, fresh fruits and more! Service is wonderful.
The gym is never full and there is everything you would need to get a good workout. The spa is fabulous. 3 different types of saunas, a relaxation area showers.
The downstairs bar is great after a long day of work. Again fabulous service and good food.
I would high sky recommend this hotel. 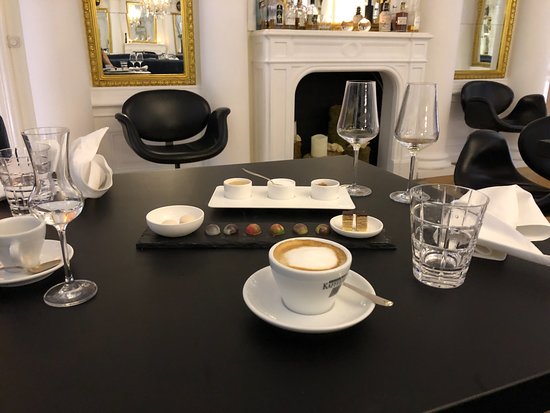 After several days of traditional German cuisine, we found 1-Starred restaurant Speisemeisterei. It is a long haul from the center of Stuttgart, but worth it, for the view, location and beautiful decor. It's hard to believe this elegantly decorated single room restaurant exists in such a remote location. Be prepared for a tasting menu full of little bites and foam. The main dishes are excellent, but you definitely do not leave full. The service is impeccable though, and even the house wines are top notch. We made Reservations a few days in advance and there were still multiple tables open. 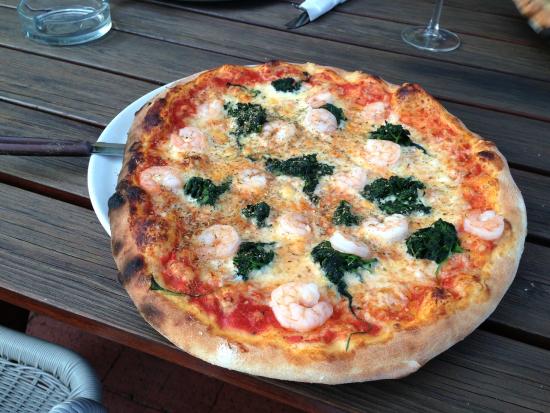 If you need to go on a romantic date, this is the place. Located by the Bahnstrasse in Leinfelden, the staff in this restaurant are friendly, especially the older gentlemen...they also speak pretty good English. If you have picky children, you won't go wrong with this Italian Restaurant. My son just love their lazagna and my daughter won't order anything else but their pizza because this is what she comes here for, she says. Their pastas are great too. Pizzas are cooked right in the restaurant's brick oven, so if you end up sitting by the 4 tables next to the oven, you may feel overwhelmed by the heat. Other than that, this restaurant is just wonderful.
Calling for a reservation may also be your best bet 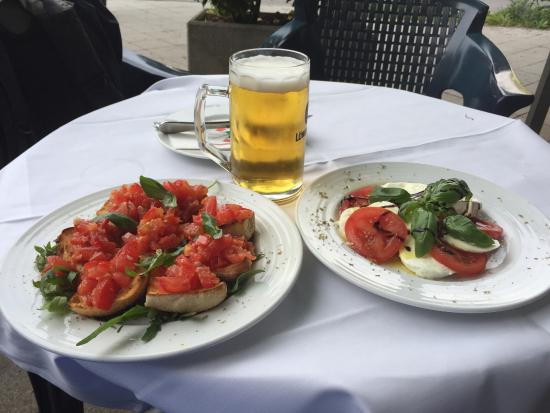 Reviewed By RE14 - Co Offaly

Visited this restaurant twice during a four day break which speaks for itself. The hotel is across the road from the S Bahn station and bus stops. It a 500m walk from the Ibis Hotel.
The restaurant had a friendly atmosphere and was busy on both nights, but did not have to wait too long to be served. The tomato soup was excellent, the best I have tasted for a long time. Lasagne was also very good and hot (still bubbling when it arrived on the table). The prices were reasonable (€11 Lasagne, €5.50 soup, €3.50 beer). Take away pizza was also available.
I would not hesitate to go back to this restaurant if I am in the area again. 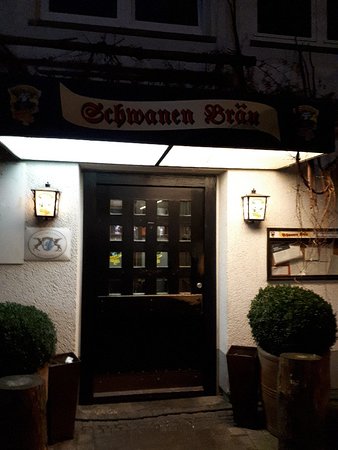 I've flown out of Stuttgart-Echterdingen many times, having done years of contract work near Stuttgart and having made friends there, and always the problem was how to get a decent drink/meal in or near the airport. Then I discovered the Schwanen-Brau (Swan Brewery) at Filderstadt on the other side of the airport. Schwanen-Brau is a traditional brewery/pub/restaurant in the dependable German style. It's tucked away, so a quiet place, but has quite a lot of room inside, when you wend your way through the place. Service is excellent, orders are taken by the staff electronically at the table, so no risk of lost/misplaced orders. They brew their beers on the premises and they're *good*. Food is excellent and local, so Schwab and Bayerisch flavours/textures. I find the portions on the satisfyingly-large side but that's a personal thing. It's a busy place, mind, so if you haven't booked you may get to wait a while, but that means more beer-drinking(shame!). I really don't see myself suffering airport catering at Stuttgart again, now that I know the Schwanen-Brau. 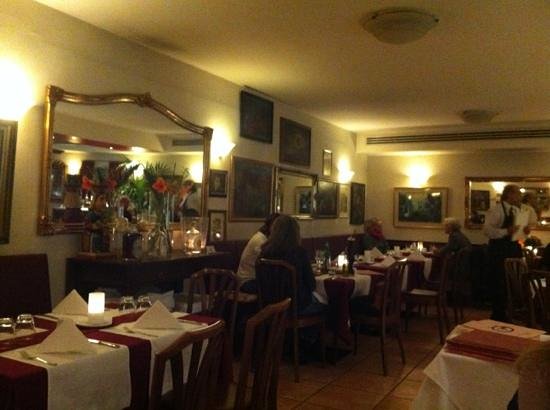 The food is well tasting and cooked out of fresh ingredients. Meat was very good and tender so was the liver. Service could have been quicker and more attentive. It was exhibition time so the place was full but could have been predicted. 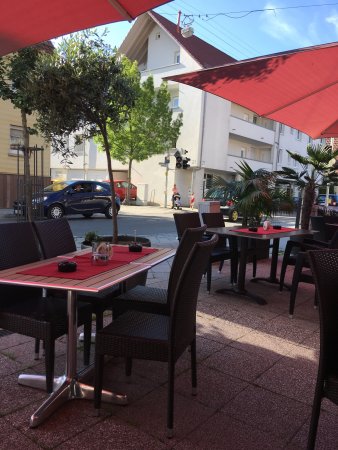 Well everything good that's been said on TripAdvisor is true, a wonderful host with limited but adequate English to help a none German speaker through the menu.
The food was tasty and interesting, some specialities were new to me and beautifully cooked and presented.
I'll be back when I'm in town again 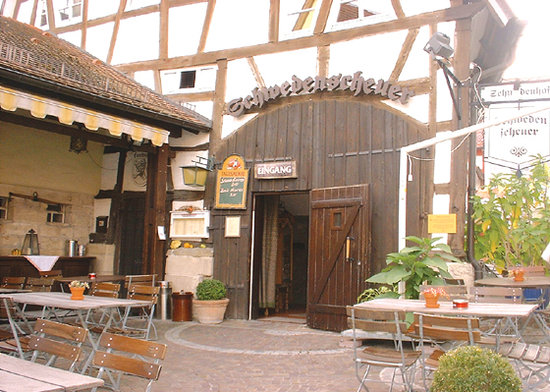 PROS
- Atmosphere: I had dinner here on a warm evening, and I stayed outside, and was amazingly good. great atmosphere!
- Food quality: Very good food, typical german food from Stuttgart area.
- Service/staff: Friendly also English menu and waiter can talk English.
CONS
nothing in particular
DO I WILL RETURN?
Yes, highly probable 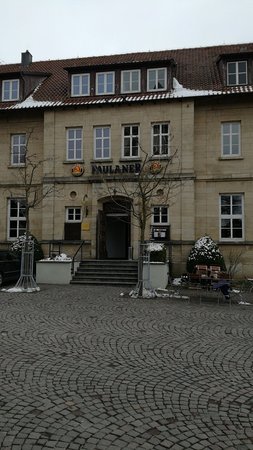 Paulaner is a great place for friends and families to spend an evening. Service is really good and the menu offers a variety of traditional German foods. The käsespätzel is especially tasty! The bier selection is good as well. Reservations are simple to make and I would recommend making them on weekend nights.