Top Things to do in Holguin

Set in rugged, mountainous territory in the east, Cuba's fourth largest city is known as the City of Parks. Columbus called the area "the most beautiful land eyes have ever seen" and much of the surrounding area hasn't changed. Officially called San Isidro de Holguin, the city's elegant plazas, scatter of colonial buildings and few museums make for a pleasant daytrip. More wonders lie offshore. Swim with dolphins in Bahia de Naranjo Nature Park. Dive to sites off Playa Esmeralda and Guardalavaca.
Things to do in Holguin

Reviewed By RobinThom - Vancouver, BC, Canada

The Casa de la Trova on the west side of Parque Calixto Garcia is worth checking out. There is a modest stage, beer is reasonably priced, there is no cover charge, and you get to hear some good local musicians but the sound system is not as good as it should be. 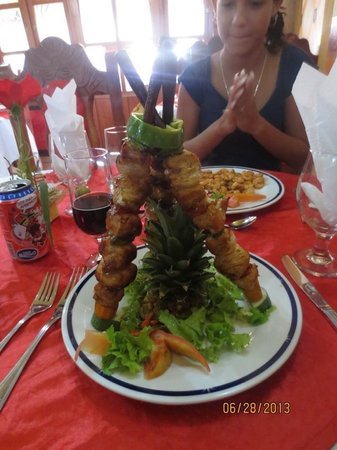 If You arrive You'll ask Yourself " Where in the world can this restaurant be?" When You come up the stairs you enter a whole new world: a waiter opens the door, beautiful interior, caring hosts, something one can hardly find in state-operated Restaurants. The food was very great. I can recommend the Steak Uruguayo, a beef-based Monster-Schnitzel fied in a crispy breadcrumpcover like Wiener Schnitzel or Milanese , stuffed with ham and cheese. But its far too much even for two persons. Really huge! 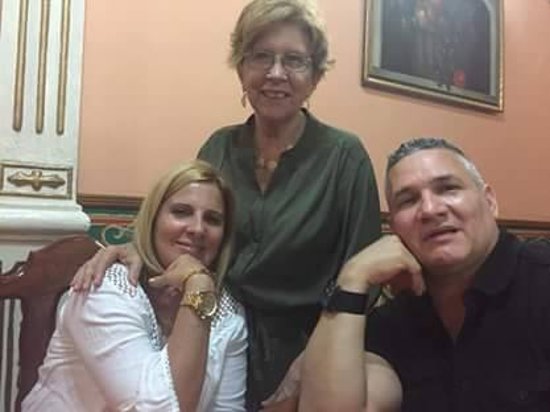 Welcome to our 1910 Restaurante & Bar if you want a ¨Gourmet¨ style full meal you´ll want to remember. We also have a small but well-stocked Bar and a staff of great experience serving visitors from around the world. You may also do and pay bookings from abroad for friends or relatives in Cuba.

This restaurant has at least three menus, one for the locals priced in monedas nacionales (pesos), one for average tourists priced in CUCs, and another for those staying at expensive hotels with higher prices. The first night I went they handed me the average tourist menu, which was reasonable enough (around $10) for the squid but the next night the same item was listed on the same menu for $17. Evidently, they had not recognized me from the night before, and I had been escorted there by a concierge from a hotel after trying to find the restaurant again on the second night. The food is good quality and you may have to wait in line during prime dining hours, so try to get there before 7pm. 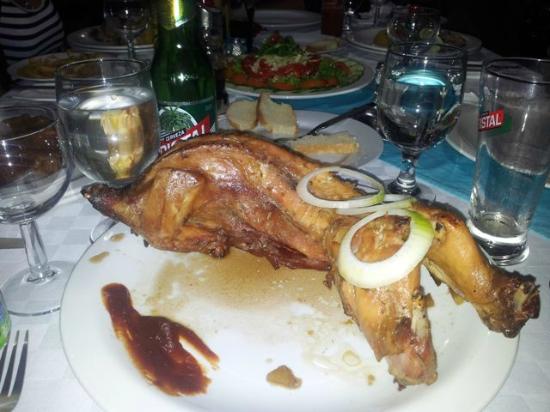 Smaller groups or couples may have a different experience. We were a group of about 31 and I think the restaurant couldn't service us adequately due to the large demand on the kitchen. The result was that we could be seated and served, but the wait staff was overwhelmed and the kitchen was not able to service our needs. Two of our tables waited over an hour before the first plate was brought to a table and only when our group's leader had a chat with the manager and chef. Shortly after that we received our orders. Sadly, two of our table who order pork rib dishes couldn't eat the meat because it smelled or tasted rancid. The other two of us who had acceptable meat shared ours so we wouldn't be force to wait any longer while the meals were replaced.
Although highly rated on TripAdvisor, I cannot recommend this restaurant to anyone at any time. 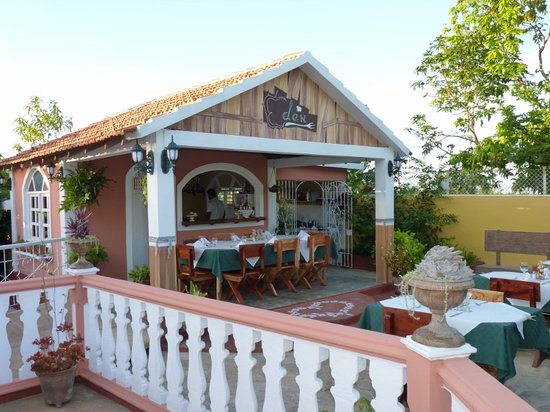 On Reading such excellent reviews on Tripadvisor regarding El Eden,I decided to take my partner there on our visit to Cuba November 2015. To say we were both disappointed is an understatement...the menu consisted of 3 starters 2 of which were unavailable,so had to settle for Ham(pork luncheon meat) and Cheese.Main course had a choice of only 4 bland options,two of which were unavailable.Asked for a Mojito to drink...guess what...unavailable!! Settled for a glass of wine,which WAS available but "off". Having eaten in many restaurants over the years,my partner and I found El Eden to be very disappointing and for what we had, very expensive.
We were picked up and returned to our hotel in an old American car the cost for the return fare being 30 cuc,on the return journey we were told we would have to share the car ,but this was not reflected in the cost.All in all a very expensive,disappointing evening,and would not recommend El Eden. . 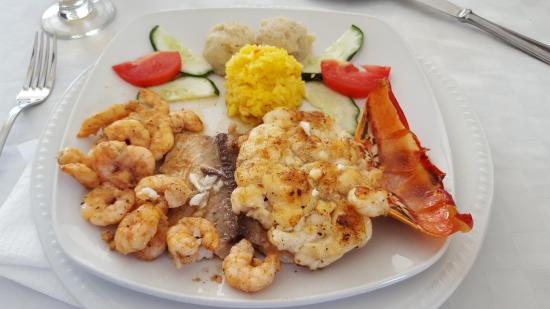 We a had a group (20) dinner here on our final night. The food was delicious and the staff spoke very good English which is a comfort to the non Spanish speakers. Every aspect of the meal was good and there was a terrific yet affordable wine selection. 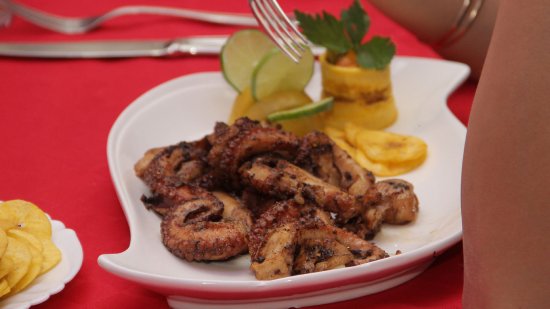 Only few steps from the Central Park of Holguín. Just in front of the Navigation room in the main building of ETECSA. There is our RestauranteBarLaTorre, where you will enjoy with your family or sentimental partner authentic cocktails and a delicious meals, from seafood, to chicken cordon bleu. We work hard to be authentic, you will enjoy known wines and will be treated as old friends. Please receive this welcome from our chef, maître and the rest of our staff.

Nice welcome from two kind and nice waitresses. Simple restaurant style, nothing of luxury or fashion but good standard for cuban small town.
We was in 4 and we eat a lot, from some starters, beef meat (usually forbidden in Cuba), lobster, dessert, mojito, etc.
The waiting time was a little long but the waitresses heads up about the time because the restaurant was quite full. We paid about 20 $, the right price for our big dinner. 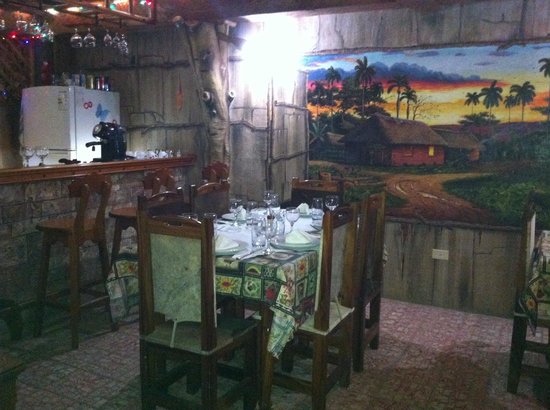 At the end of a lovely visit with a Cuban family, the owners insisted on taking my husband and me out to dinner at Los Almedros where they had often dined for family celebrations. After a short wait we expected to be seated at an available table. Instead a staff member quietly informed two of the family members that, according to the restaurant's new policy, the two tourists in the group (ourselves) would have to pay for our meals in Cuban Convertible Pesos (CUCs) -- for which the prices are very greatly inflated to levels unaffordable to a great majority of Cubans. The family members clarified that because we were their guests for dinner they, not us, would be paying for our meals, and the more reasonable standard menu prices in the Cuban national currency should be charged. The staff member was emphatic and inflexible despite this circumstance, and the family members, visibly upset, left the restaurant. Outside, rather embarrassed, they explained what had happened. We naturally offered immediately to pay for our own meals, but they graciously declined as they strongly wished to host the meal and were offended by a restaurant that they had previously enjoyed. They also felt strongly that as Cubans it was important not to accept being treated unfairly. Needless to say, they refuse to visit this restaurant in the future. And neither will my husband and I. As tourists in Cuba we have no objection to paying our expenses in CUCs and at much higher prices than Cubans do, given that it takes 24 Cuban pesos to equal 1 CUC. But for a restaurant to adopt a policy of applying this burden to a Cuban family when they are hosting a couple of tourists is highly offensive. Such profiteering despite the social cost to Cubans is painful to observe. 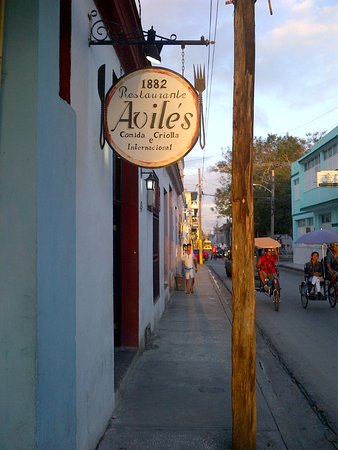 This restaurant has a prime location, on the north side of Frexes, just a bit further to the east from the park from the Salon 1720.
Since this establishment opened, management has upped its game by providing very good freshly cooked food and attentive, professional service.
The restaurant is relatively small, at around 8- 10 tables, some of which occupy and inner courtyard (you might get wet in the rain if you sit here). The place might not be appropriate for a large group, due to lack of space.
The waitresses cope reasonably well when under a bit of pressure.
The bar area, at the front of the establishment, is inviting and the bar tenders know how to mix a good cocktail.
Prices are quite reasonable.
In my opinion, for service and quality of the food, this is the best restaurant in Holguin. 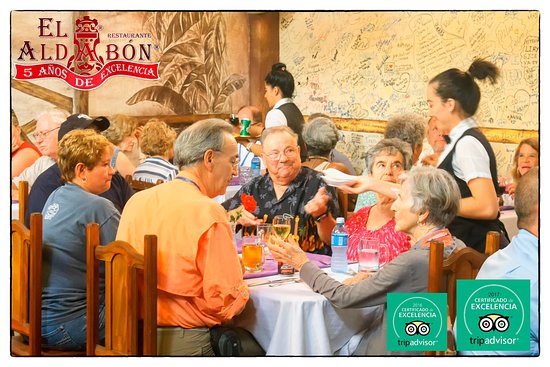 Specialized in Creole, Italian and international food. Its varied and offer excellent quality has earned the acceptance of the most demanding Cuban and foreign guests. Located approximately 50 meters from the "Calixto García" Park, central square of the beautiful city of Holguín. This restaurant makes finery of the best culinary traditions of international food and the popular dishes of the Italian table. With an excellent barbecue and a heated area where you can enjoy the most exquisite Cuban and international dishes. Our headquarters is a colonial house built in the 18th century. It has been carefully restored and the main door retains a bronze image that gives rise to "El Aldabón".

This is a nice enough place but the atmosphere isn't special. Staff is good, and food was fine, just wasn't a highlight of the various restaurants I've experienced in Cuba (over 50)