What to do and see in Holguin, Cuba: The Best Places and Tips

Set in rugged, mountainous territory in the east, Cuba's fourth largest city is known as the City of Parks. Columbus called the area "the most beautiful land eyes have ever seen" and much of the surrounding area hasn't changed. Officially called San Isidro de Holguin, the city's elegant plazas, scatter of colonial buildings and few museums make for a pleasant daytrip. More wonders lie offshore. Swim with dolphins in Bahia de Naranjo Nature Park. Dive to sites off Playa Esmeralda and Guardalavaca.
Restaurants in Holguin 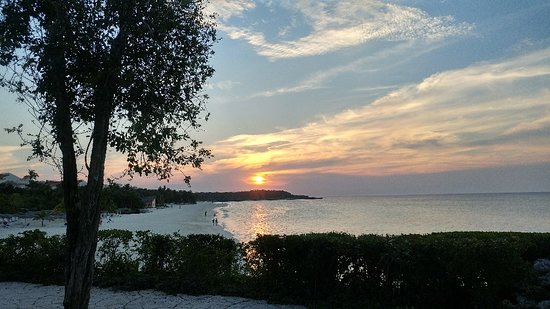 Stayed at Sol Rio de Luna y Mares resort in early February which is directly on Playa Esmeralda. Stunning beach, long and deep with lots of trees for shade. The resort has a beach hut/bar/ snack bar at either end of the resort. Was a bit windy during our week there, but sunny everyday. Still good for swimming/ getting cooled off, but kind of windy for snorkelling right off the beach. 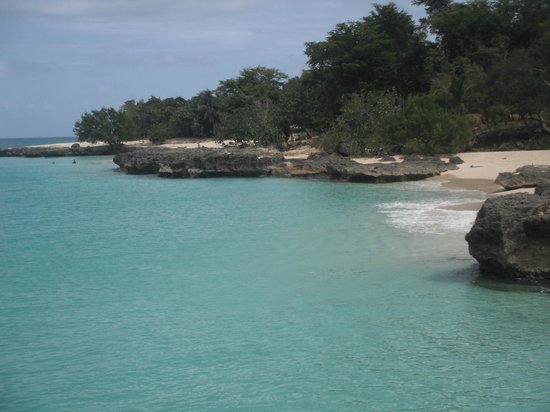 I went on a catamaran cruise to the island. The cruise itself was a decent length and had an open bar. I preferred the smaller catamaran used for this tour over the larger catamaran. The including snorkeling was neat as well.
The island itself has a small beach. There are a few places for a good photo op.
The food was buffet style, and was all quite good.
The safari tour-the reason I went was awesome. It had been raining hard the past few days so it was really muddy which made a great ride in the old safari bus.
The animal collection was great as well and including animals from North America, Africa, and Europe.
The only downside to the tour was the long drive to the catamaran dock-a couple hours each way. 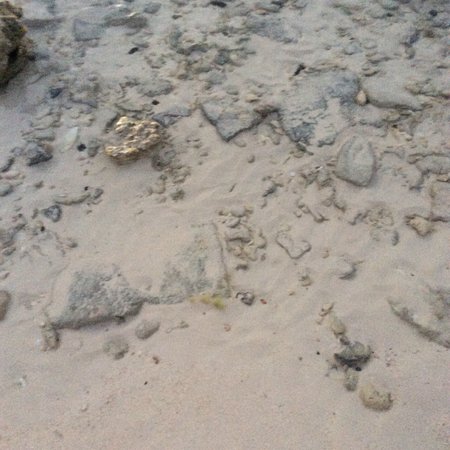 This beach has the softest most clean sand without a rock in love this beach. Chairs were available at a cost is 1 peso , snack bar served food and beverages. 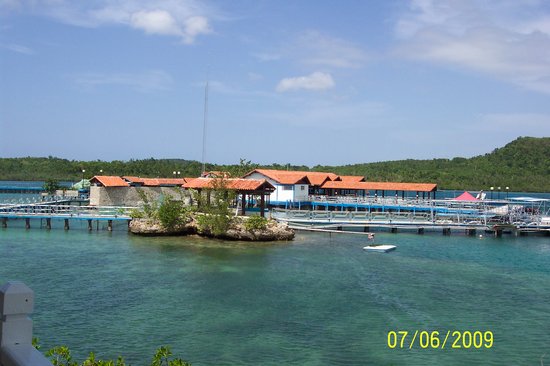 Fabolous time here swimming with dolphins, watching the sealion show and had some lunch here. Never swam with dolphins before and was so excited. Beautiful creatures looked after by fabolous people here, even got my partner to come in as well even though he doesn't swim and he loved it too (everyone wore a lifejacket, so I don't think he felt out of place) it's a must when in Cuba. One word to finish FAB!!! 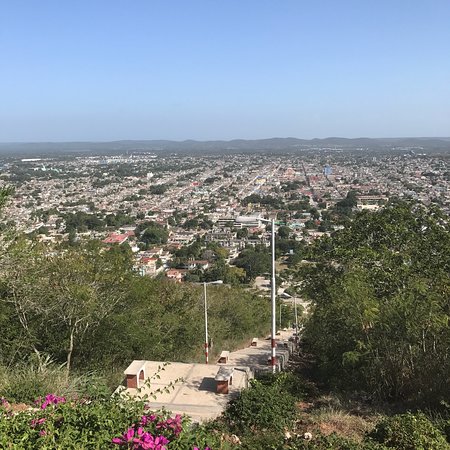 The hill of the Cross was one of the stops we had during our tour and the views are simply a delight to look at. Recommended if you visit Holguin. 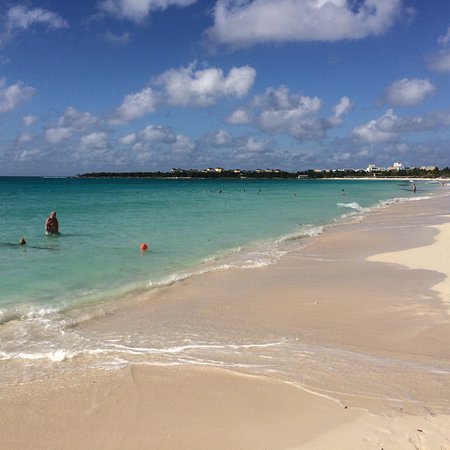 We spent two weeks at Playa Pesquero, from January 24th to February 7th. This was our 6th visit, having first discovered Playa Pesquero in 2008, and last visited in January of 2017.
Prior to going, we were somewhat concerned with respect to the number of negative reviews. Funny how that always seems to happen!
This review is more directed at those who have been previously and are considering a return. We will speak to what has changed in the past year or two, and take the opportunity to address certain criticisms we have read on TA.
We observed a number of changes from last year, including:
• The lobby area has been refreshed with most everything painted white. We were skeptical when hearing about this, but upon seeing it, we view it is an improvement.
• The furniture located in the front of the lobby is new.
• For those who have not been in two years, a significant chunk of space in the centre pond area has been converted to Seating area, so it is very rare that one cannot find Seating now.
• A cigar lounge has replaced the disco, and the nightly disco is now located in the games area.
• A la carte restaurants were better than ever! We were not disappointed once. Being there for two weeks, we tried them all.
• Buffet restaurant tables and chairs are all new.
• Breakfast available at the Yareyal restaurant by the pool, which we don’t recall in previous years. We mostly had breakfast there after discovering it. Nelson and the ladies truly looked after us! Great omelets.
• Enjoyed pork and steak (yes, steak!) for lunch at Yareyal.
• Pizza on beach was even better than a few years ago.
• Nightly karaoke moved from games area to the mojito bar. So fun!! We had a few great evenings and some less so. We enjoy the fun and variety, but some groups tended to monopolize the singing on certain nights. Not sure how to remedy this.
• Vendor stalls along the main path heading to the beach have been removed.
• Wi-Fi:
o Expanded coverage to include some restaurants and apparently some areas around the pool, although not throughout the resort for those that desire it (we don’t).
o Cost reduced to 1 CUC per hour.
o While the speed was slow to our standards, getting online was quicker and no more challenges ensuring disconnection, and losing your remaining time.
• Chairs are all new in the entertainment area.
• A trailer containing bathrooms has been placed near the beach, behind the pizza shack. While this is an improvement, a few of the toilets were broken.
And now to comment on the criticisms posted by others:
• Broken Pool tiles and grates: still some broken tiles but not many, and grates have been repaired.
• Pool cleanliness and green water: pool was clean our entire time there, and we saw staff power washing area around pool on several occasions.
• Pool chairs broken and stained: again, witnessed staff power washing. It is understandable they get dirty with people laying in them all day, with sun lotion to boot!
• Loud music, in some cases people had brought their own speakers and were blasting their music by the pool or from their room balconies. We were able to move of course but it seems courtesy to others is lacking by the vacationers…not a resort issue exactly
• Availability of clean tables in buffet restaurants, always a struggle when at peak capacity
• Nightly entertainment is poor. To be honest we don’t watch them often but there was a live band a few times which were very enjoyable.
• Long Check-In: Ours was quick, and we were impressed on how quickly the front desk processed several buses that arrived in short succession one day.
One additional comment of note. We had the privilege of lucking out on an excursion into Holguin for a day. The front desk hooked us up with Yerson Guillen Mayo, aka George. He and his driver buddy (wrote the name down but of course can’t locate it right now) picked us up around 9 in the morning, and we spent the entire day in their great company. Yerson brought us to many sites of interest in Holguin. He took the opportunity to explain the history of each area, in the context of broader Cuban story. Paying a personal guide was well worth it. Our day with Yerson was the highlight of our two weeks! Can’t wait to hook-up with him again. His phone number is (+53)52743295., email [email protected] 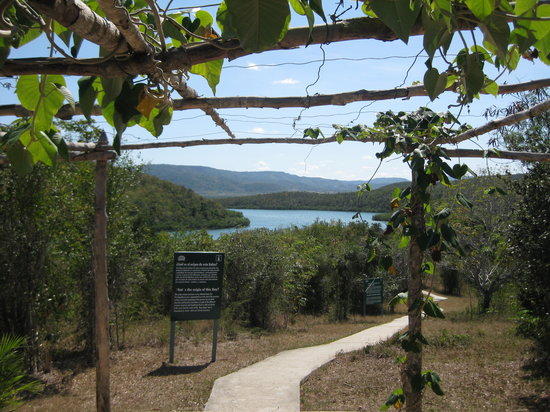 Guided by Lebon who was very good. We go to tour a mini zoo, with various animals. Ostrich, Red tailed Hawk, Cara-cara, Alligators, Galapagos Tortise, red squirrels, and monkeys, (Lebon don't aggravate the monkeys) pigeons, owls, Guinea fowl and some chickens. Went for a horse back ride to go fishing. Lebon was our guide, rowed the boat out for us and baited our hooks with pieces of shrimp. Caught 3 different fish. one big enough to eat. Was cleaned for us and deep fried. Also deep fried some fresh plantain. Fish was the best tasting, better than at resort. Plantain was also best tasting we've had. Horse back to a restaurant and farm tour. Got to see some of the animals, pigs, chickens, cows, turkeys, ducks and rabbits. Tasted fresh cut sugar cane and got a piece of fresh Aloe for sunburn. Lunch pineapple chicken, tasty. All in all this was an interesting excursion and only 5 minutes from Memories Holguin resort. 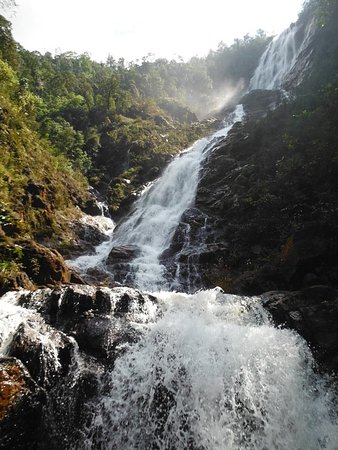 Excellent guides and a lovely lunch. All in all a great day out. it is good to get away from the resorts and see the real Cuba 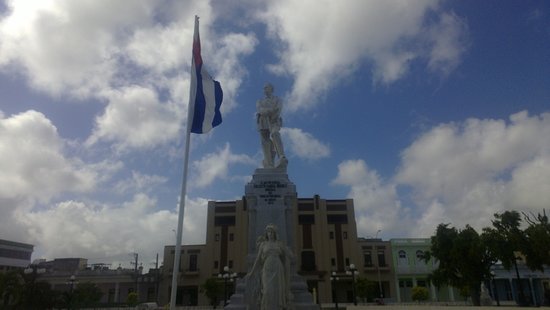 A nice place to sit and watch the world go by. Holguin is called the "city of parks" and this is one of the nicest. Fully revamped and fixed up in the winter of 2016-17.