Geroskipou (Greek: Γεροσκήπου; Turkish: Yeroşibu) is a coastal town in Cyprus, east of Paphos. Its current population is approximately 7,000 and it is the second largest municipality in the Paphos District. Yeroskipou, with its remarkable five-domed Byzantine church of Agia Paraskevi, and its Folk Art Museum, is a popular tourist destination. It is known especially for the production of Turkish Delight or "lokum" (locally loukoumia or lukum). The town is the only place in the world which has protected geographical indication (PGI) for the popular dessert.
Things to do in Geroskipou 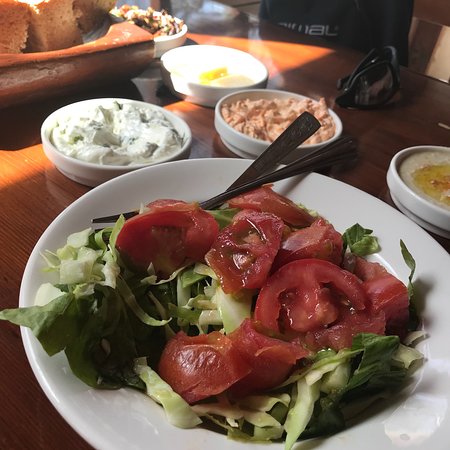 It should be noticed that the establishment is a very traditional one, in more ways than appearance. It is an old building of stone and wood. The two dining rooms are decorated with antiques and items from the old household of rural Cyprus. The garden is very pleasant with flowers and herbs growing all around it. The food is traditional and seasonal. We cook everything that can grow in Cyprus, basing a lot of our food on traditional dishes, and wild vegetables, picked by ourselves. We serve Meze, which traditionally means delicate taste, and in Cyprus it is used to mean a variety of delicacies. A typical meze at the 7 St Georges will start with salad and between 6-10 appetizers, this will differ every night but may include, homegrown olives, cured meats, dips and pickles. The meze will continue with a variety of traditional and some times contemporary meat and vegetable dishes. We use only the best meats to provide mouthwatering roasts and succulent casseroles, you can expect to enjoy our now well known Kleftico (lamb or beef on the bone cooked in sealed ovens, succulent) and a vegetarians delight of vegetable dishes, depending on the season they will include, rice stuffed marrow flowers, bumyas (ochra) cooked in a tomato and mint sauce, black eyed beans with home grown marrow, tomato fritters, cheese and vegetable pies. The meze will be about 20 dishes, depending how much one can eat, expect to be surprised and delighted at the array of dishes that will be brought to you over the meal (expect to be eating for about 2 hours), at the 7 St Georges we serve quality food in an informal and comfortable setting, take your time and enjoy the experience.

Please don’t listen to comments like ‘slow service’. It’s Tapas it’s supposed to be wine, banter and small dishes over time. Also comments like “not suitable for toddlers”. It’s Tapas you fool, you wouldn’t take a toddler for a seafood platter either. Another idiot said “there isn’t a menu”. It’s Tapas cretin that la what there experience is about. So the facts are - it’s traditional Cypriot Tapas. It’s great value. Staff are mostly family and George was still cooking after 22 years in this establishment. Don’t go if you are expecting burgers or one meal. It’s Tapas and the best I have ever had. Simply amazing. 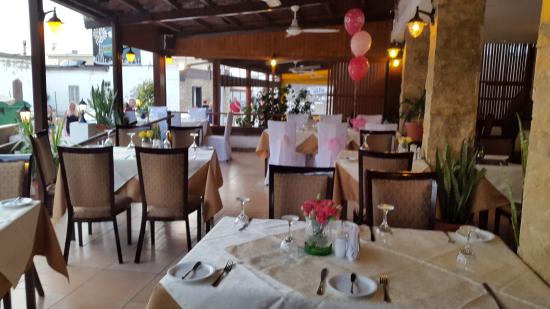 The Windmill is a family run restaurant owned from Chris Kathitziotes and his family for more than 30 years. The restaurant offers a large selection of Cypriot and International food. It is also specialised in Meze.Availlable for wedding receptions and other parties. Reasonable prices.

the place has a lovely atmosphere, the vegetarian and vegan menu are impressive.
the service is well meaning but a mixture of over-bearing and under-informative.
we went with the vegetarian meze and found the food was not to our taste. some .
dishes were too salty, others were overcooked.
sadly disappointing for the price. 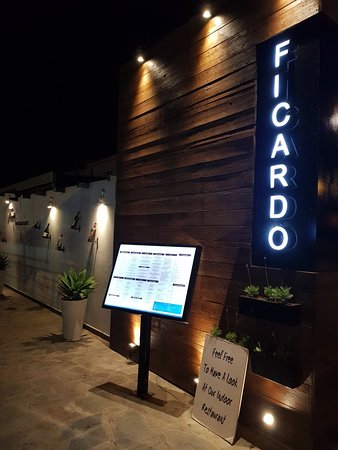 Visited for a birthday celebration whilst on holiday for a wedding. There were about 26 of us spread over 2 tables next to each other. Service was very good and the food was excellent. Would highly recommend a visit here when you are in Paphos. 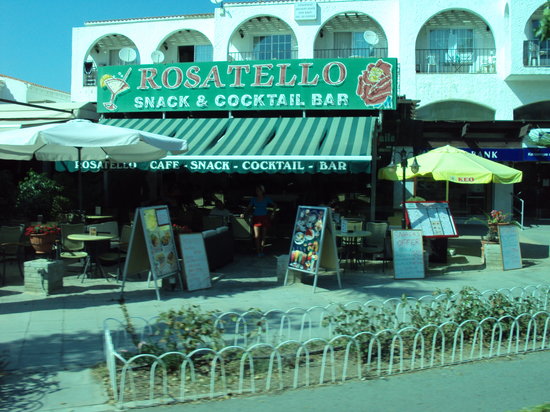 Dear customers! Due to unforeseen circumstances Rosatello bar restaurant is closed! We would like to thank you all for your support ! Best regards George & Malika

On our second trip to paphos and knew that george and malika had moved to new premises. The food was as excellent as ever with their friendly and attentive service. So lovely to see you guys again. You must visit this restaurant and enjoy a...MoreHello Alison. Thank you very much for your kind review. It was a pleasure seeing you both again. We are happy that you enjoyed your meals and hope to see you again. Best regards George and Malika 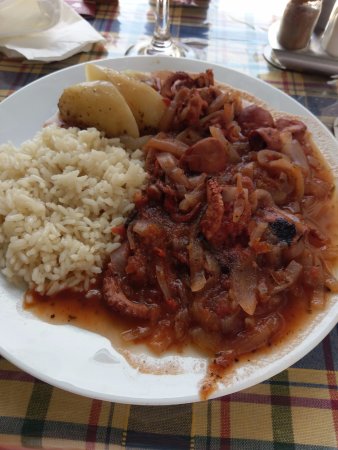 You can't beat going to Laona's in the old town....the food is delicious and the staff are really lovely and friendly with genuine warmth. The restaurant opens during the day serving freshly made dishes and the bonus is the 2 evenings they open, Tuesday and Fridays where the meze of dishes are shared....and, boy, do you need a walk after all the delicious food. Can't fault any of it. True gem...... 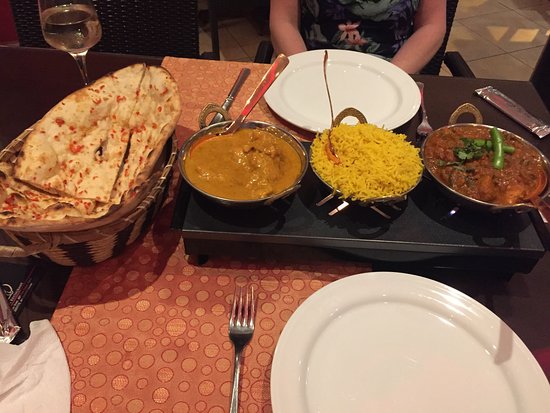 Liked the atmosphere and ambiance of the place. Extensive menu featuring a lot of dishes you’d expect. Started with chicken pakora which was nice without being special. Main course was chicken sagwaala, bombay aloo and a garlic naan. Chicken has the choice of medium or hot - chose medium which was just about right with a good kick of spice. The naan was enormous but thin! Bombay aloo was also tasty but the whole meal was just nice without being exceptional. Thought being asked three times during the main course if everything was ok was a bit ott! 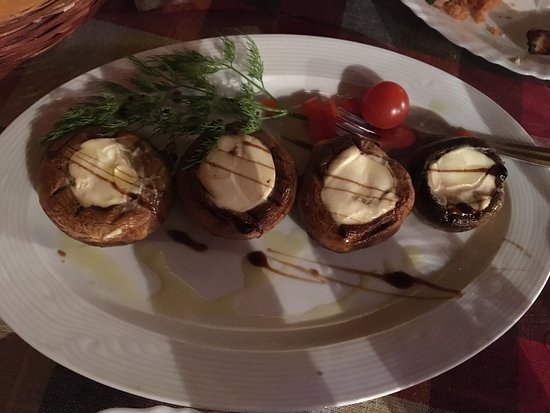 We came here as a "last night" meal and wish we'd come earlier. The food is excellent and cooked to order. We had a variety of dishes, ranging from tasty keftedes to a vegetarian maze via the mist tender pink loin. Drinks are reasonably priced...MoreThank you for the review! 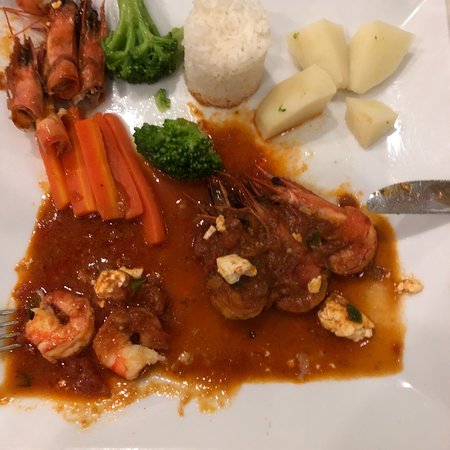 Went with friends on our last day in Paphos.
Lovely weather so sat outside.
Service is always with a smile and superb.
The food is cooked to order, but during the wait you get bread and olives with dips.
The food is always top quality and this place is a must to visit.
Fantastic value for lunch with drinks €10 per person!!! 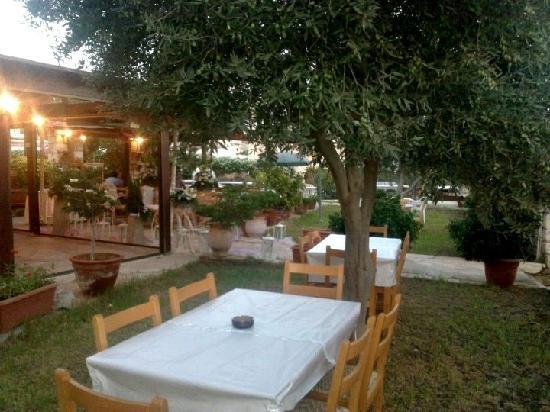 A simple traditional taverna, family run, with no gourmet elements, as that would contradict the whole concept, in a village setting and beautiful Gardens. My mum prepares the food with lots of love and the rest of us make sure it is served to you properly and on time! The presentation is simple as well, as my father wants, although my mother would love to show off a bit more of her skills:) However and most importantly, it is genuinely Cypriot!We have had the taverna since 1990 and during the years we have made a lot of wonderful friends and shared with them beautiful moments, wedding and christening parties, anniversaries and birthday parties. That is the best part of the story!So, after writing a whole essay I realise I could just describe it with one single sentence: A family-run tavern who loves Cypriot food and enjoys serving its visitors!Thank you for taking the time to read it!

Food was bbq and first class, knocking spots off every other similar establishment in the area. Absolutely scrumptious! Pork melted in the mouth and chicken crunchy outside and moist inside.
The whole family extended a very warm welcome and provided the most delicious Greek salad. Everything was in it and I'd love to be able to make the dressing. Lots of extras too - super orange drizzle cake to follow which was all included! Wine was local of course and complemented dinner a treat. 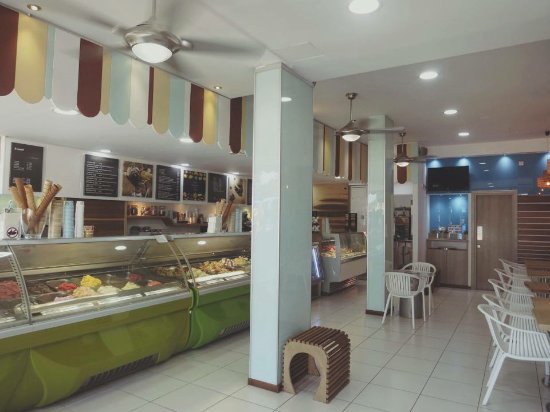 Fantastic range of flavours, 1.5 euro for a large scoop (portions are bigger than other gelateria's on the seafront). We liked the maltesers, rum and raisin, yoghurt and pavlova. Lovely to buy and icecream and walk the short distan.ce to the sea front where you can sit on a bench watching the water and the world go by