Top Things to do in Pleiku

8 Things to Do in Pleiku That You Shouldn't Miss

Pleiku is a city in central Vietnam, located in that nation's central highland region. It is the capital of the Gia Lai Province; Many years ago, it was inhabited primarily by the Bahnar and Jarai ethnic groups, sometimes known as the Montagnards or Degar. But now, it is inhabited primarily by Kinh ethnic group. The town is the centre of the urban district of Pleiku which covers an area of 261 km².
Restaurants in Pleiku 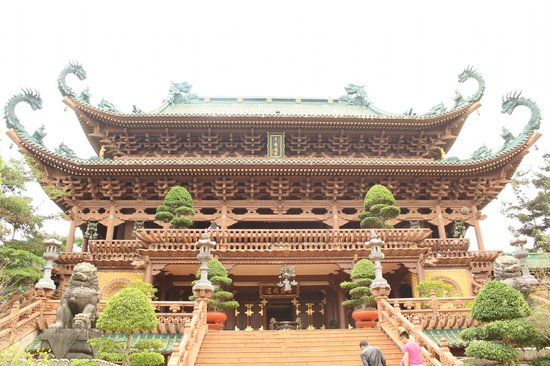 I've visited quite some temples and pagodas in Vietnam, but the Minh Tanh Temple in Pleiku really was something...
Let's start from the beginning. I visited Pleiku in July 2014 on occasion of my 2 and a half months trip through Vietnam. To be honest, I've really had the impression that I was one of the only foreign tourists there. There was hardly any tourist infrastructure like tour agencies or scooter rentals, etc. The point is that as long you don't have your own vehicle, there isn't much you can do in Pleiku and the surrounding area...
Except visiting the Minh Thanh temple of course, which is allegedly designed according Taiwanese architecture. After searching it on Google Maps it's relatively easy to walk there by yourself. Otherwise ask the locals for directions, especially the younger generation is really happy to help you. At the said street you then see the temple from its backyard, where also the entrance is.
Just after the entrance on the left you'll see some pictures hanging on the wall, showing the suffering of future descendants to hell. Quite amusing, if you ask me.
But the cherry on the cake definitely represents the actual front garden of the temple. Holy cow, I haven't seen something pretty in a long time. From the actual building over to the majestic stairway and the small Gardens with lotus ponds everything there is a feast for the eyes (and also the camera).
During my visit they were also about to finish a majestic tower pagoda, which seems Japanese-inspired to me. Looked fantastic too.
The only downside was that I couldn't enter the actual main building and that there weren't any monks around to talk with you. Maybe I was just late?
To put it in a nutshell, if you happen to be in Pleiku anyway then definitely go visit the Minh Thanh Temple. I especially am thinking of all those travellers who bring their own motorcycle or those who have a lot of time.
If you only have limited time for your 'Nam trip then I wouldn't recommend to go to Pleiku only because of the temple, no matter how good it is after all. There are just much more accessible cities and sightseeing locations in Vietnam. 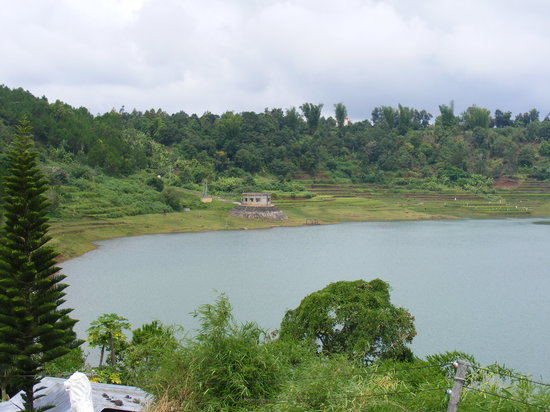 The lake is there. I doubt anyone would make a trip out there just to visit the lake. There is a history behind the lake. I think there was a volanic eruption in the early 90s. There is a shrine built in front of the obervation tower.
Again... If u visit this place, u are with one of those motorcycle tours. 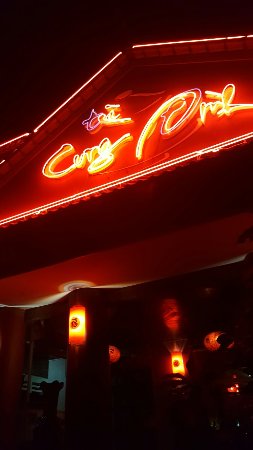 This is one of the most beautiful coffes in Pleiku. It was built with vietnamese traditional architecture. Its space is very wide and clean. There are many kinds of drinks with reasonable prices. 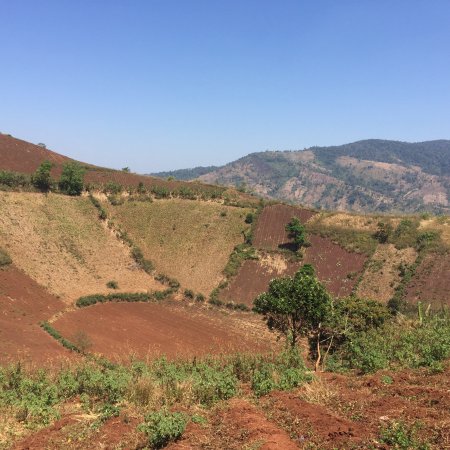 The best part about the volcano was the drive there! You drive through a little village with a lot of smiling faces. If you haven't been to a rural area yet that alone would make the trip worth it. The volcano itself isn't that impressive. Climb to the top (use the path, we made our own way up and it was really hard) the view from the top is pretty and you definitely see a lot of cows! I had a good time visiting the volcano and would recommend it if you have time. 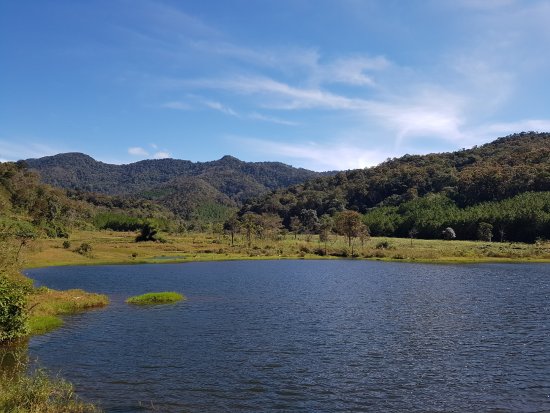 I visited Kon Ka Kinh in Jan 2018. It was my favorite destination in Vietnam. In flew in via Pleiku. It proved difficult to find information on the park; acces, permit, guides etc. By asking around I found the Gia Lai Eco tourist office, (82 Hung Vuong st, Pleiki) the only office with English speaking agents in Pleiku. It seemed I was the only visitor during my period there. I was blown away by the service by miss Anh and Nga from the office. Not only did they help me with all that comes with visiting the park, they invited me for dinner, English lessons for the kids, etc. Kon Ka Kinh park is about 70 km from Pleiku. I went by bike (about 1.5 h drive). Make sure to have arranged a guide and permits in advance. It might be a problem in you havent. I tracked through the jungle for two days with a guide (400-500 VND per day incl guide) and stayed overnight in the park (200-300 VND). I had dinner with the park staff. Kon Ka Kinh is truly primary jungle. The fauna is amazing and multiple endangered animal species live in the park. 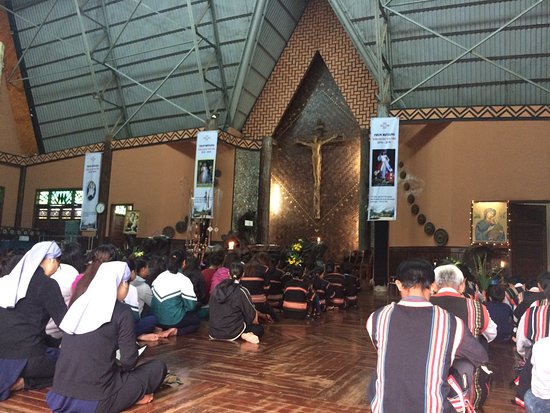 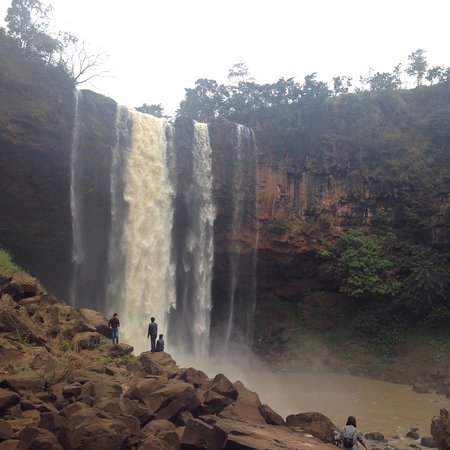 We took the trip to the waterfall and it was very pretty! There is a boulder field you have to climb so bring sneakers. You can also climb behind the waterfall which is pretty cool! 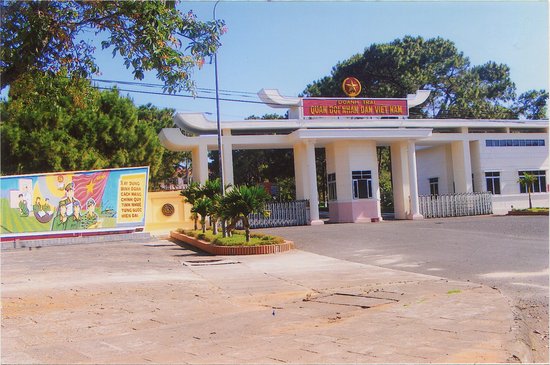 Reviewed By Steve B - Montville, Australia

Having visited the sites and remains of a great many of the major bases which were built - no one builds bases like the Americans - during the French and American Wars, as the Vietnamese call them – given they have been fighting for their independence and nation for over a thousand years, it comes as no surprise they do not dwell on distinctions, for that small country, it’s been one long series of conflicts for as long as anyone can remember, for a great part of their history, war was their country, the Cham Empire, Thailand, Cambodia and of course, China, and the aftermath of all this, they are still dealing with – I have never been to a site and not found something I could take from it, and that does not mean some cartridge casing, or an old rusted Zippo, or strips of PSP steel perforated plating once used to fabricate airfields, or old Hueys airframes, or M48 tank remains: those things are long gone, the scrap metal dealers transformed anything like long ago into a recycling industry.
And yet, even though very little evidence remains in most places - fifty years tends to do that - what had once been is still there if one knows where to look: the years leave a silence, of course, but if one listens long enough at the old sites, the ground still talks to you...moments stopped in time pour out, images come to the mind from no where, I have found it is a most profound feeling, sometimes terribly spooky, to be certain, as if a cloud has passed over and dimmed the sun and dropped the temperature.
I am not sure what folk expect at these sites - I once overheard one young American couple, not of Vietnam era age, comment at Khe Sanh Combat Base, '...you know...I thought there would be more here...' as they wandered about, not really knowing what they were looking at - as without a deep knowledge of the history of this country, visits are somewhat meaningless.
I wondered what the young Americans had expected at Khe Sanh, did they think the whole base would still be there, with Huey's still thudding in and out and C-130's rumbling down the runway, F-4's dropping napalm outside the wire, the 155mm 'Long Tom's' from Camp Carroll firing support Missions?
Hill 1015 remains in the distance, as it always has, in the brooding silence of that misty jungle, and slightly away, near the remains of the Lang Vai Special Forces Camp, Hill 881 North and 881 South are still there, the ground has just soaked up those terrible dark times. Nevertheless, in that silence, especially when the crachin, that low, fine drizzle, has not yet burned off in the morning sun, what had once been is still there, one just has to stop, listen to the silence, and the images flow back in.
I have found a great many of the old bases and landing zones in I Corps: Khe Sanh Combat Base, the Lang Vai Special Forces camp, Cam Lo, Camp Carroll, 'The Rockpile', 'Mutter's Ridge', Quang Tri, Dong Ha, 'The Citadel' at Hue, Phu Bai camp remains, Chu Lai camp remains, they are all still there, hidden away, sometimes unrecognisable as farm land, sometimes rubber plantations, sometimes the bare outline of an old airstrip remains, but they still remain, there is enough evidence to see what has once been.
Sometimes nothing at all remains, but the memory will last a thousand years, nothing can wipe it away: at Son My, Tu Cung, a village the world knows as My Lai 4, one can stare at that irrigation ditch where the villagers were machine-gunned, and a lifetime of standing there will never reveal anything more than the fact it is an irrigation ditch, one will never see the horror of what had been, but the ground still overflows with the pity of war.
Lately, I have been in II Corps, the Central Highlands and while they take a little finding, the old bases and hill battle sites are still there: Ben Het Special Forces camp, Dak Saeng Special Forces camp, Dak To 1 and 2 Special Forces Camp and ‘Phoenix’ airfield, Hill 875, Hill 882, 'The Grove' where John Paul Vann was killed, Kontum strip, and further south, near Pleiku, Camp Enari and ‘Dragon Mountain’, LZ ‘Oasis’, Duc Co Special Forces Camp, with the Ia Drang Valley and Chu Prong Massif in the distance, and around Plei Me Special Forces Camp, and I've found mostly what I have been looking for: it takes time and research, but it is all still there, one just has to know where to look.
Mostly, it is around all the time: Camp Holloway is the same, there may not be a lot of objects to see, but it remains nevertheless, despite, or in place of, the absence of evidence... as does Camp Radcliffe and LZ 'Golf Course', the Mang Yang Pass - I have found the spot where the French Groupe Mobile 100 was wiped out in June '54, it is still there, it is just a matter of knowing where it is and knowing the history - and An Khe and the Song Ba River.
Some days I come back from these places overloaded with the history and memories, and over a 333 beer in the later afternoon, I think a lot about it all, and then I am buoyed by watching the Vietnamese who endured it all, and in the fading light, I see finally there is hope, and dreams for better times, and for me, finally, I think it enough for this moment. I can't hope for much more than that...