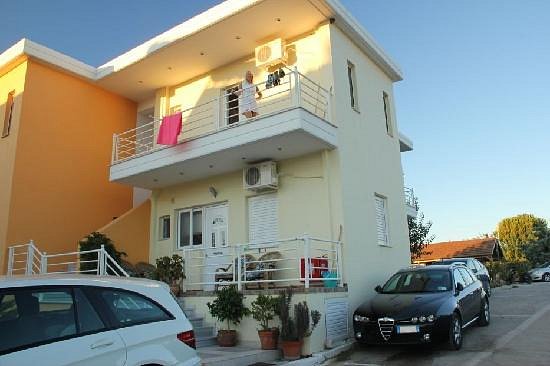 Reviewed By Dionysia B

Nice place with garden and a snack bar. There is a playground where children can play, while parents enjoy their drinks or food. Variety of dishes with very good prices. Friendly staff and quick responsive. You can go to the beach on foot as it is very close to the famous Zacharo Beach. Free parking. Pet friendly. 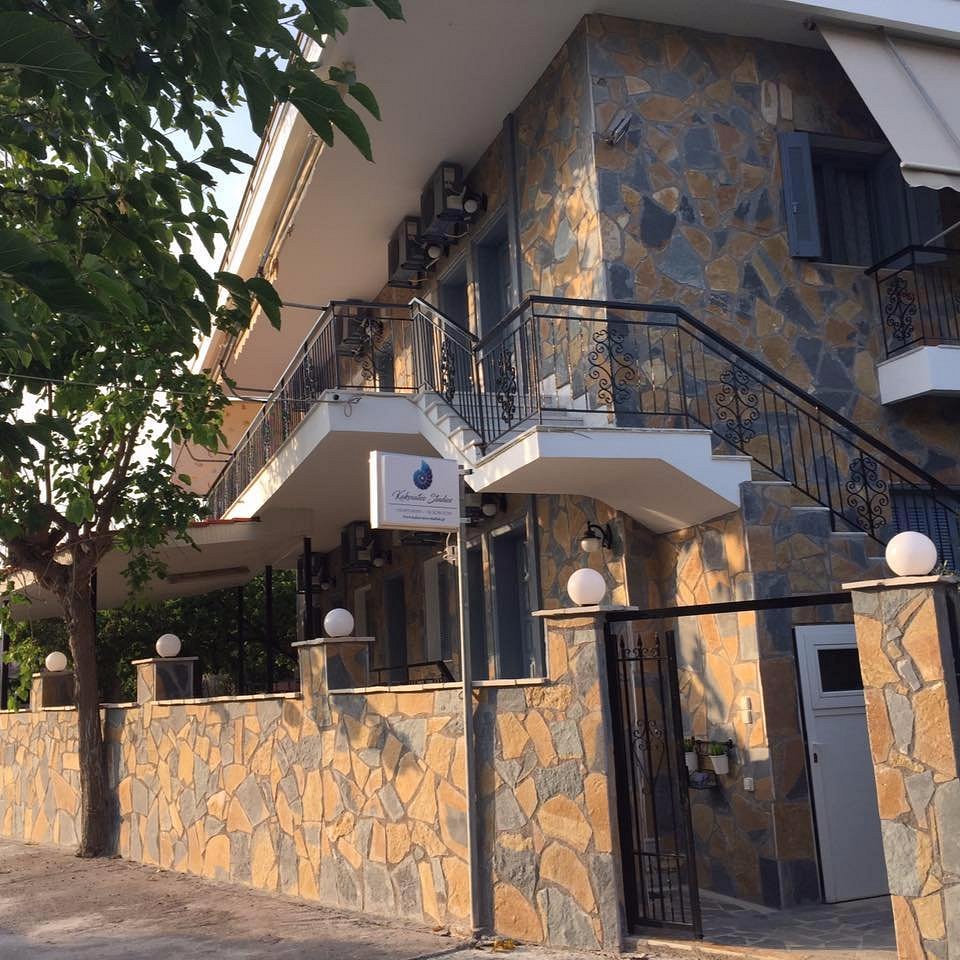 Just six walk-minutes away from the beach, the Kakovatos studios are conveniently located in the heart of the village of Kakovatos with easy access to local shops, cafes and restaurants, just off the main square of the village- a place to come together for the entire family, and especially the kids, a spot to relax and socialize, a place to see and to be seen! Kakovatos studios is a family-run business where we treat our guests as friends. The owner is ever-present and always around to assist with any need ensuring guests get the most out of those best days of a year, their much-deserved vacations. The accommodation caters equally well for families and couples alike, while the 20-year long experience in hospitality has refined our emphasis on creating a casual atmosphere, while providing tidiness and comfort. The Kakovatos studios are surrounded by well-maintained gardens available for our guests' exclusive use. The unit further features spacious street parking, while wi-fi is available across all communal areas. All apartments feature a fully equipped kitchenette with, either cooking facilities, or a small oven, a large fridge, individual A/C, TV and furnished balcony. Our 'small' rooms provide a mini-fridge, TV and an individual A/C unit, everything one needs for a comfortable stay. Kakovatos studios are located 5 klm from Zacharo, 8 klm from the Kaifa lake, only 21klm from the ancient site of Olympia, 20 klm from the Neda canyon, 34 klm from Pyrgos, the closest major town, and 55 klm from the Kalamata International airport. We look forward welcoming you to Kakovatos studios!

First of all, the studios are not 6 minutes walk from the sea but 700 meters, measured, which means just 10 minutes walking, as we were also dragging children. If your physical condition along with children and carrying bags allows you to walk almost a kilometre at 35-40 degrees under the sun, you will have no problem. Secondly, the balcony as seen in the flattering photo is not private but you share it with 3 rooms so your private space is non existent. But all that could be fine and pretty much bearable. The worst is the air conditioning, it is a comparatively small unit which clearly does not cover the space, as the studio has 2 bedrooms in a row (which DO NOT have a door for isolation so if you are a family take that into consideration) and the cooling capacity is not enough for either space. When we arrived, the atmosphere was stuffy and we decided to leave the air conditioning on for as long as we went to the beach, hoping to create liveable conditions. When we returned at noon, the air conditioning was shut off and the atmosphere unbearable. We presumed the owner had shut it off so we asked her about this and were told that the air condition probably shut off "by itself" due to "frequent power failures". For once, we thought this could be the case and we considered that just tough luck. I have asthma, we tried to operate the air con for a while to cool the place down but it was impossible for me to stay in the room under these conditions so I had to sleep with all the windows open which means that we were severely bitten by mosquitoes as the windows do not have nets nor has the room the electrical anti-mosquito devices. The next day we again let the air conditioning on and we returned again only to find it switched off! Once again we called the owner who, truly annoyed and with a very rude tone, informed us that she did not shut it off and insisted that there was a power failure again (what a coincidence)...However we were in a neighbouring building all day and did NOT notice any power failure ... I would accept her apology, saying for example that this was their eco policy or something, but do not like to be treated as stupid. In any case, the bathroom is tiny and old-fashioned. Clearly the owners have refurbished with visible IKEA items what can be flattering in the photographs avoiding the essentials , such as the bathroom and air conditioning which is inadequate, old, noisy. We did not use the kitchen because we could not stand the heat in the room. If you want to visit, do it in the winter. In the summer there are far better options in the area.

Anesis Rooms to Rent are located in the center of ancient Olympia at a distance of aproximately 750 m or 8 minutes walk from the archaeological site and the Museum of Ancient Olympia. Our cozy rooms offer you quiet moments and relaxation. All our rooms are equiped with air conditioning, television, WC, free Wi-Fi.. A shared kitchenette is available to all guests. Right outside the front door you can enjoy traditional Greek cuisine and specialties of the family restaurant business called "Taverna Anesis." Free parking is available to all our guests.

It’s hard to criticize such a cheap, clean, well located place. But as others have commented, the mattresses are awful. Rock hard. You can feel the springs. I barely slept. Even tried the floor it was so bad. An easy fix for the owners, if they respond to this comment saying they’ve changed them, I’ll happily upgrade to a 5 star rating.

Loved every minute here place is clean and amazing. Loved the roosters waking me up just as the sun. I cannot recommend this place more highly.so all animal and water lovers do come and enjoy.so i enjoyod and hope you do aswell. 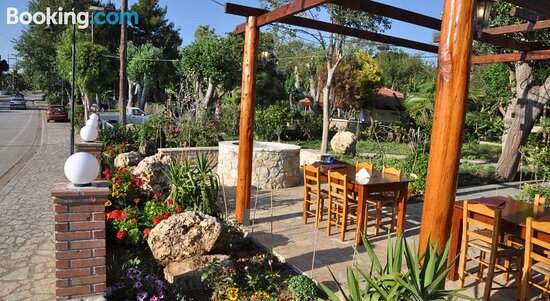 Comfortable Rooms for two or three people with shower/WC, TV, refrigerator and conditioner. The windows are equipped with mosquito nets. Each Room has access to a separate balcony or terrace and our vast Gardens. Enjoy our freshly cooked traditional Greek cuisine, regional wine and traditional Greek music. Sitting inside or outside, we will find the perfect table for you. 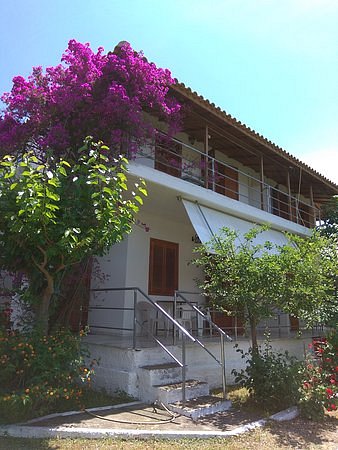 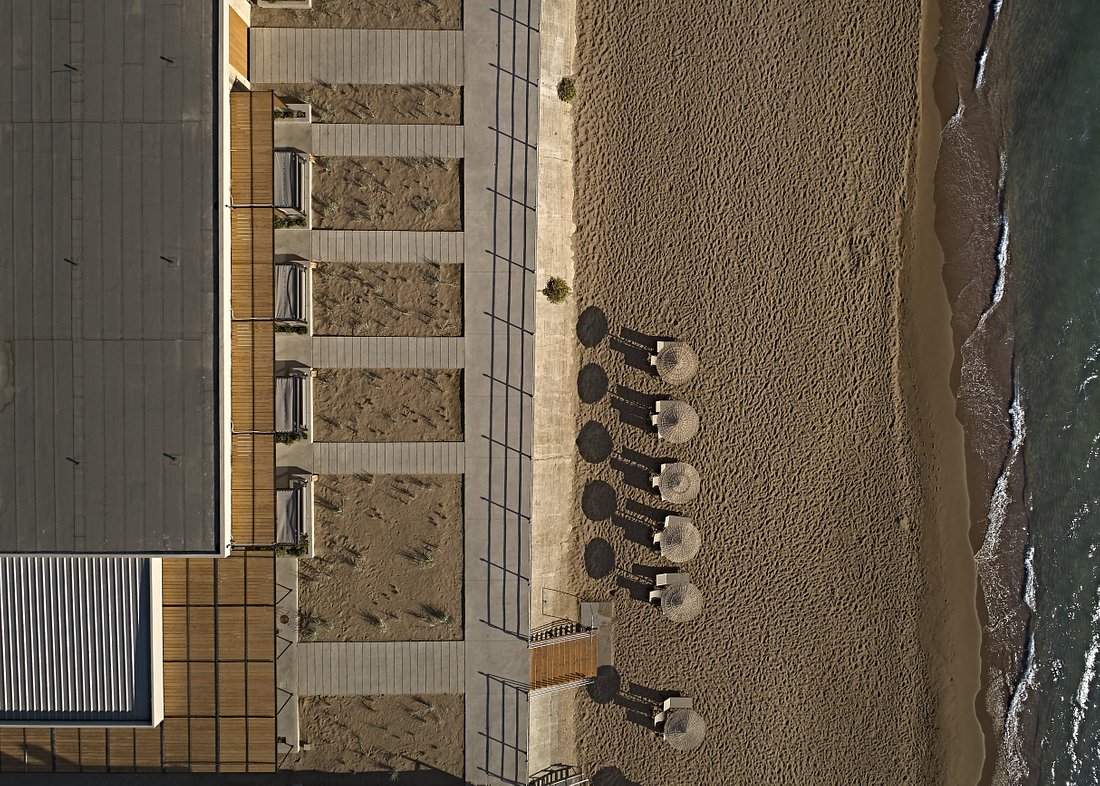 Dexamenes Seaside Hotel is an architectural slice of Greek trading history on the mainland’s western Peloponnese coast. Inside an abandoned wine factory set directly on the sea, the property offers guests the singular hospitality experience of sleeping inside old wine tanks from the 1920s, which have now been minimally reanimated with steel, engineered glass, timber, and a clean-lined aesthetic. All wine tanks also boast a private patio under a canopy, while a bar-lounge, a taverna, a history room, and a boutique “Bakaliko” store selling local produce all bring the location to the forefront. Taking guests from this post-industrial concrete landscape to the sands of Kourouta beach is a wide promenade that seems to float above the sand.

We stayed for 3 nights and wanted to stay longer once we got there. It's amazing what was done to z run down winery. The location is great, right on the beach. Service is excellent. We will definitely return next year for a longer stay. It is within driving distance to Olympia. 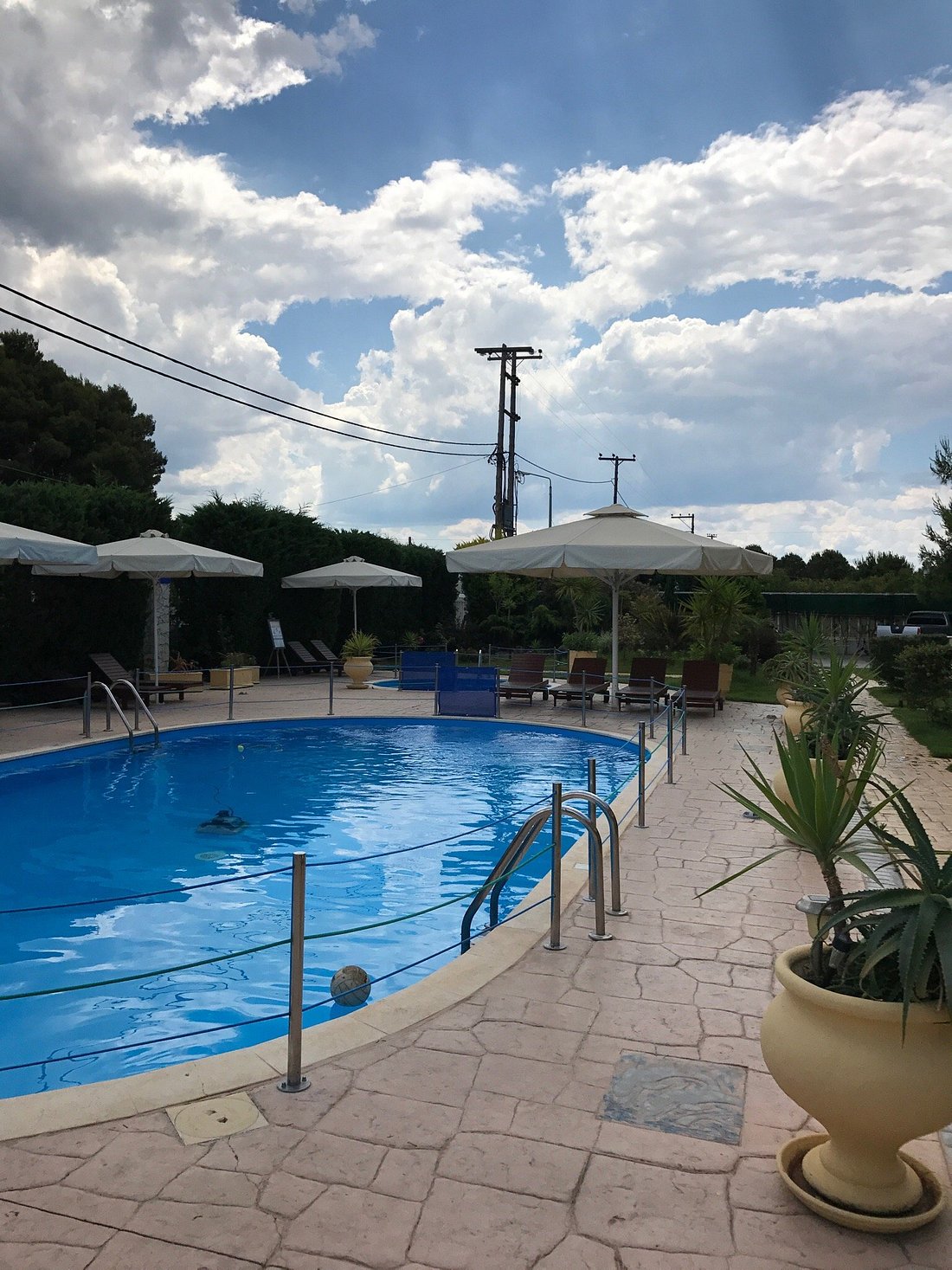 We had a great time. The pool is right next to the appartments, clean and well maintained. All appartments have two terraces on opposite sides, so that you can always sit in a shade. The rooms, kitchen and ammenities are all as advertised. The family taking care of the place is super helpful and sweet. The parking places are shaded as well, and there is lots of green so even though we came in time of extreme heat, it was bearable. The sea is close, walkable distance but we used to go by car. Very pleasant experience. Genari apartments is a small family-run resort of three different apartments for all year holidays with direct access to a private beach. It was built with special care and respect to the architecture beauty of the area. It reflects its owner’s simplicity and unadorned aesthetics. Amazing views obtained from gardens and inside the apartments. The apartments are self catered and accommodate up to five persons. Each apartment has its own distinctive style.Genari is situated directly on our small and quiet beach and is surrounded by a well kept and relaxing garden you will enjoy a great time of relaxation.Surrounded by the vineyards , overlooking the beauty of the Ionian Sea will reward you for your choice.Each apartment consists of a double room, a kitchen fully equipped to service up to five persons, a bathroom with shower and a living area with single beds-sofas and a window – door leading to the seafront verandas. Each apartment‘s veranda has its privacy !!!!!

This is a small group of apartments, located in the vineyards and surrounded by the blue Ionian sea.Very close to interesting areas like Ancient Olympia.We stayed a week and our apartment was large , tastefully decorated with comfortable beds and a balcony door leading to a small beach. Good value for money.I totally recommend this place . 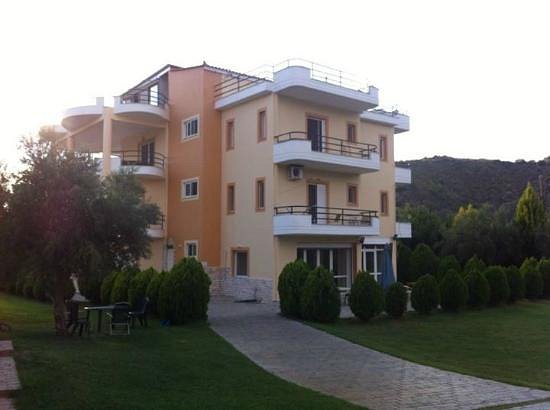 Anilio Plaza Apartments & Studios is located just a short distance from Kakovatos famous beach, 3 kilometers away from Zacharo Village in Ilia Prefecture and 2,5 hours from Athens following the new avenue road to Kalamata and continue to Kyparissia Village to Zacharo Village. It is built in a private area of 11 acres surrounded by olive and pine trees. Anilio Plaza consists of 5 full equiped apartments and maizonnettes, 4 double studios and 8 triple studios, providing for an enjoyable stay for 60 people . Other facilities include a big outdoor and also indoor glass view and heated pool, entertainment room with billiards , table tennis and board games. The large balconies overlooking the Ionian is ideal for enjoying breakfast or coffee during evenings in our pool bar environment.

The worst place i have been iny life.

Just about the worst hotel(?) I have ever been in the 65 years i am travelling. I suggest you burn your money rather than visit that establishment. Lousy breakfast mud water instead of coffe, etc etc. Of course no amenities in the room. Ho heating, freezing cold room. No hot water in the bath. No wifi in the evenings. Should i go on ? One word. AWFUL. And of course expensive.