10 Things to Do in Soumagne That You Shouldn't Miss

Soumagne is a municipality of Belgium. It lies in the country's Walloon Region and Province of Liege. On September 1, 2008, Soumagne had a total population of 15,894. The total area is 27.14 km² which gives a population density of 585 inhabitants per km².
Restaurants in Soumagne 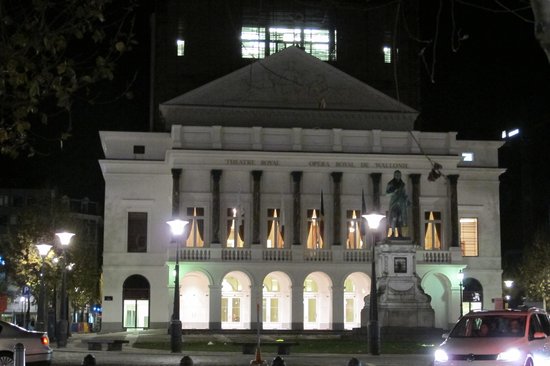 Founded in 1967, the association Opéra Royal de Wallonie-Liège is largely subsidized by the Wallonia-Brussels Federation, the City and Province of Liege. It is one of three major opera houses in Belgium. From the beginning, the institution occupies the Théâtre Royal de Liège, beautiful building loaned by the City of Liège (opened November 4, 1820). Its location in the heart of Liège and the Euregio, at the crossroads between Germany, the Netherlands, the Grand Duchy of Luxembourg and France, attracts a wide audience both Belgian and international.

We attended several Performances at the newly refurbished Opera royal de Wallonie and enjoyed every minute of it! The performance was first rate (the Italian sisters of Cav and Pag, set in production by tenor Jose Cura -- who also performed the lead in both of these short works.) It was magical!
The opera staff is friendly and goes out of its way to assist visitors; it was a delight working with them.
The opera house itself is not imposing in the foyer area; I'm not sure if the reconstruction is complete but it is very shallow and when we were there still covered with rough construction detailing. Inside the auditorium, it seems each seat must have good sightlines and the acoustics seemed wonderful.
Women's bathrooms, as is true in far too many places, were small and with too few stalls.
If opera is your thing and you are in Belgium when the Opera Royal has a production, it may well be worthwhile to visit and enjoy a wonderful evening of music.

Since 12 years, we visit the area regularly on a yearly base, even before the attraction park was there and it was just the lift and a few attractions.
We always enjoyed a drink on the Terrace down by the water. However, this is no longer possible as this is also being exploited as part of the park as well. Entrance is no longer possible without purchasing tickets, 25 euro a piece. Which was highly disappointing.
We did buy tickets, so my son could visit Plopsa coo. And although they have nice attractions, it's is simply not worth 25 euros. The park is quite small and does not offer a full day of amusement, in my opinion.
The previous system, allowing to buy wrist bands if you wanted to use the attractions was much much better. 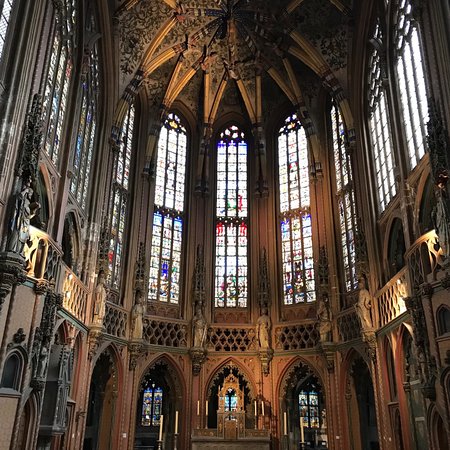 I like Church Buildings that have more than a nod to what Christianity is all about.
To that end I was delighted with the exhibition which was on display here, with various Bible passages and scenes providing the artists with their inspiration.
The bright Sunshine and simple high level yellow windows cast fabulous shades across the floor and seats.

The Citadel in Liege refers to the remnants of the Liege fortification that formed the origins of this Belgium city. Much of the original stone framework has been destroyed; some has been incorporated into the modern city; another key section apparently was destroyed to allow the construction of a very large hospital toward the top of the highest hill. According to the blurb we read before heading off, the slopes are home to more than 60 historic monuments and five listed sites—but the spots are not particularly well-marked so identifying them is difficult. However, for those who need some fresh air and exercise, this place certainly fits the bill, especially since Liege is not known as a top-rated tourist destination and places to see and things to do can be somewhat limited.
So on one particularly fine, late September morning, armed with our trusty hotel city map, we decided to walk from the city center to the Citadel. We found absolutely no signs directing us to the place and were soon meandering around inside a quaint neighborhood featuring a narrow cobblestone road and no sidewalks—apparently some of the walls of the original fortress make up the backdrop. We didn’t pass anyone to ask for directions so we just kept heading upwards, assuming that eventually we would get the highest point of land and at least see the remnants in the vicinity. About 15 minutes in we found ourselves at the bottom of a steep set of steps without any markings. We climbed up and found ourselves at the Citadel park.
At the top is a large stone obelisk overlooking the town. We think the memorial was built to honor those who had been executed during World Wars I and II, but there is nothing explicit to verify. The memorial is simple and effective, the views of the city and river below pleasing. Behind the monument the space opened into a hiking area and so off we went to explore the entire space. Again we found no meaningful signs or directions and we passed only one jogger so we meandered until we reached the top, which is home to a very large, very populated, and very popular hospital.
We found no signs to indicate how to continue on to the other side of the park or, indeed, how to get back onto the Citadel’s hiking paths so we circumnavigated the hospital until we found an opening and trusted it to be the right path—at least it was going down. We also found—at last—an area map which indicated that there were two trails (purple and red) available but no indication which one we were on. We decided to just keep heading down and eventually noticed that every now and then a splotch of red paint would show up on a tree trunk or stone; eventually we were overtaken with school kids climbing of the path on well-worn shortcuts; toward the end was a teacher walking up the trail in high heels. We came out of the Citadel on school grounds (again, no signs) and made toward the general direction of where we thought the river might be—this was pretty much guesswork since it was difficult to find a reference point on the map. We might have given up and hailed a taxi but….this isn’t a tourist town so free-roaming taxis are not easy to spot. After a few missteps, we sighted the river, followed it for a way and then, and only then, saw a sign pointing to the city center.
We enjoy walking, especially in a nature zone, so except for a few moments of panic when we believed ourselves to be completely lost and heading out of country, we had a good time. A few signs would have been greatly appreciated. If you are not used to walking, ascending via the steps as we did might be a problem but there were no other folks around so definitely no need to rush. The downward trail had some steep spots to be aware of. In all, we spent around three hours (city center to city center). The only overview that we found was at the monument itself, where you can see most of the city and the river. We did not find any other identifiable points of interest (but then, we don’t think we did the entire loop so if we ever go back, we’ll try to do a better job of navigating to find all the gems others seemed to have found). Other than that, it is a pleasant walk. 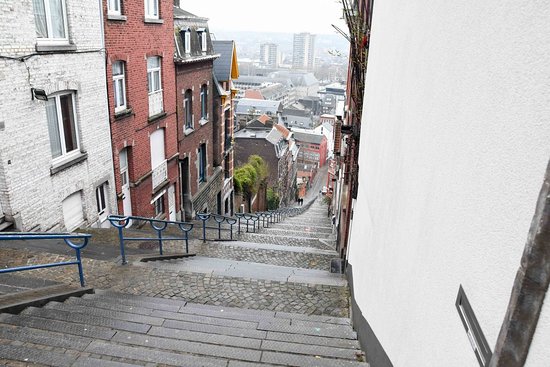 It takes some good 10-15 minutes to go up the stairs (373) but it’s a good physical as well as intellectual exercise ( try to count the stairs or find the pattern). Then , once you are up, you’ll have magnificent views of Liège and river Meuse. If you don’t want to go down the stairs again, you can take Rue Au Perì, that will take you to the historical centre of Liège. 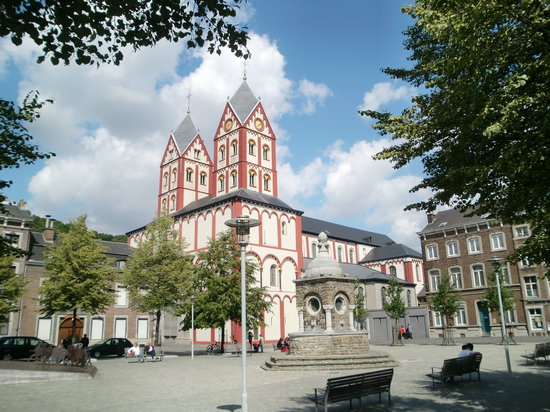 St. Bartholomew’s Collegiate Church (“Collégiale Saint-Barthélémy” in French) shows a strange mixture of styles. It was erected in the 11th and 12th century in Mosan Romanesque style, but was remodelled thoroughly in the 18th century. The twin towers were rebuilt in 1876. Still, with its original colours restored, St. Bartholomew’s looks appealing from the outside.
The white-washed 18th century interior came as a surprise and, on the whole, we found it rather disappointing. However the stunningly beautiful medieval baptismal font, which was transferred here from the demolished church of Notre-Dame-aux-Fonts, is well worth the 2 euro charged. For that price, visitors can view a video presentation lasting 10 minutes and examine at leisure the scenes represented on the brass or bronze basin, which is resting on elegant oxen.
On the square next to the church (“Place Saint-Barthélémy”) there is an interesting sculpture in weathering steel by Mady Andrien called “Les Principautaires” (1992). It represents a flock of bishops looking down on dancing little figures symbolising the people of Liege. A clear reference to the city’s past. The Fountain in the centre of the square is a memorial for local gunsmith Dieudonné Lambrecht, who set up an intelligence network in the First World War and faced a German firing squad at the La Chartreuse prison in April 1916. A fine arts museum and a centre for international Exhibitions, in partnership with the Louvre.

Reviewed By SeimenBurum - Rotterdam, The Netherlands

Museum La Boverie is housed in one of the buildings that survived from the 1905 World Trade Fair. It was renovated between 2013-2016 and houses permanent and temporary Exhibitions . The permanent Exhibitions are a bit dull but when I visited there was a large exbition on comics for which Belgian and French artists are famous. There is a nice coffee shop with some food with outside Seating, weather permitting

Small but very pleasant park by the riverside. A short walk from the modern Calatrava designed railway station and not far from Mediacite shopping centre. City centre proper not to far away either.
Lots of locals enjoying the park in good weather,walking dogs etc.
Newly refurbished art gallery looks good..I didn't have time to visit.
A nice place to stroll or sit and watch the world go by.
Try and find the almost tame rabbits sun-bathing on the riverbank.
Nice place in an attractive city.

Curtius Museum has been restoerd during many years and now open to public in a very nice new place (entrance from Rue Feronstree). You may choose one part of the museum to visit in detail (take a guide or a visit organised by tourism office with a guide (take a dedicated one to art).
A must. Very rich collections with many pieces that you cannot see somwhere else.

Right in the city center, you will find the Cathedral, which is surrounded by houses in a very special way, like in Medieval times. Since they are refurbishing the exterior, I only can tell about the interior, which is magnificent. One must admire the painted ceilings, the wooden sculpture of Christ in the middle (medieval) and the marble sculpture of Christ just at the right of the entrance by the local artist Del Cour. There is also a treasure that you have to pay to see. Unfortunately, the stained glasses were destroyed during the war, so they are modern. Nevertheless, it is a must to visit this beautiful Cathedral!