Top Things to do in Gwangju

10 Things to Do in Gwangju That You Shouldn't Miss

Gwangju (Korean pronunciation: [kwaŋ.dʑu]) is the sixth largest city in South Korea. It is a designated metropolitan city under the direct control of the central government's Home Minister. The city was also the capital of South Jeolla Province until the provincial office moved to the southern village of Namak in Muan County in 2005.
Restaurants in Gwangju 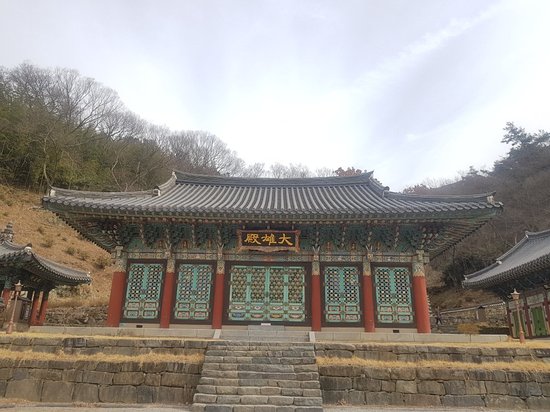 For English speakers who visit Gwangju without a car, there are several options for getting an introduction to this massive group of mountain peaks, even if you have little time. Obviously, the national park is ideal for hikers, but there are ways for non-hikers to enjoy a little of the park as well. The option we chose first was to take bus # 1000 (17 and 27 are other buses that will get you there) to the Jisan Recreational Area entrance, walk cross the street to the hotel, buy tickets for the chair lift and the monorail in the building beside the hotel, and ascend effortlessly up Hyangnobong Peak, just outside the border of the national park. From the chair lift it is an easy walk to the monorail departure station. The equipment is probably about 30 years old, so there is a small amount of risk incurred, but if you're not afraid of heights, it is well worth the ride. The monorail allows access to the Jatgogae Observatory on Hyangnobong by way of climbing a number of steps. From this viewpoint, one has an excellent view of Gwangju. The downside to taking this option first is that there is no national park office, and it would be better to have a guide to the park in English, which you can get from the national park office in Gwangju or from any of the Visitors Centers within the park. After descending by hiking (although a round trip chair lift is available and recommended if you are not used to steep, rocky trails), we managed to find another bus (# 51, 09, 29 & 29 are your options) to get to the Jeungsim Information Center. Here we found the English guide map and a nice stroll along a beautiful cascading stream to the Jeungsimsa (temple). Although the path to the temple is sharply uphill, it is a lovely place to see. The other popular route into Mudeungsan which we did not explore is to take bus # 1187 to Wonhyosa Temple; from that entrance more of the major hiking trails are easily accessible. The important thing is not to miss Mudeungsan National Park if you are visiting in the Gwangju area. 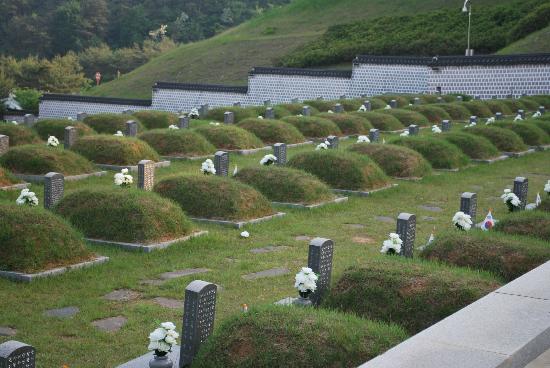 The Memorial and the museum are a good introduction to the Gwangju Uprising of 1980. The graves of the victims are moving, as is the Memorial Hall. The exhibits in the museum may occasionally seem overemotional, but the movie provides historical background. Well worth the longish trip out on the aptly-named 518 bus. A little further up the road is the original burial place of the victims, if you have time make your way up there, too.

We took a cab from our hotel (Firenze Hotel) and the cost was about 5000 won. The museum is well-organized and most of the information is available in English. The museum traces the customs of Korea from birth to death. I especially enjoyed the displays of local food since it helped me to identify some of the things we had been eating.
The museum takes 1 - 2 hours to visit and is free. It's next to the Art Museum and you can also walk to the Gwangju National Museum from the Folk museum (ask for directions). It's about a ten minute walk. We visited both museums in the morning. 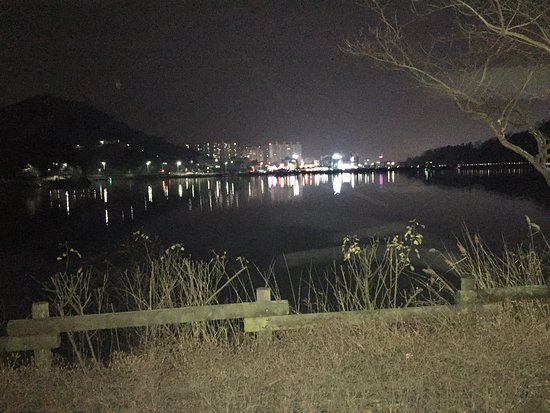 CAn energetic jog or a romantic walk. Pungam Reservoir is a great idea. Connecting World Cup Stadium, Yeomju Gymnasium, Lotte Outlet stores & mall, AND entrances to hikes on Keumnam Mtn. Safe, family friendly with spots to use the communal exercise equipment that is ubiquitous in Korea. 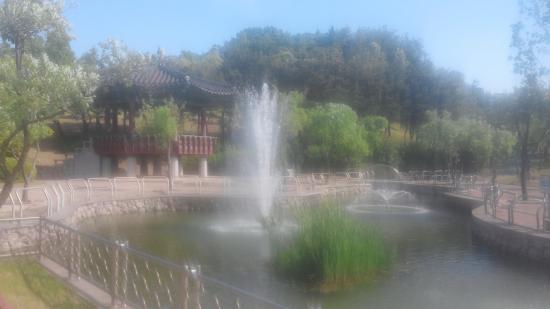 C1 ( 2015.05.21 )
This park was wide and well organized. For near people, there was very good green place and for walking. In the middle of park, there was located memorial for people who died at Kwangju democratic movement. And in the basement of memorial, many people's name had an inscription on the wall. My feel was going in solemnity. The calm and the devout was this park's charateristic. 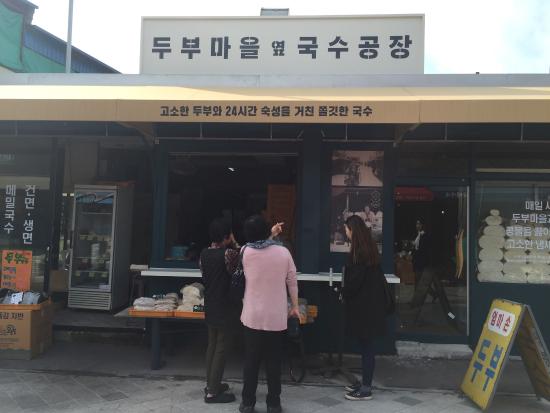 A nice refurbished historical market opposite the train station with places to eat and drink. Even has a place to wait that will display the train times. Not a long street but packed with interesting little stores selling hand made noodles, a butchers or just small cafes. An interesting mix of old buildings with new store fronts. 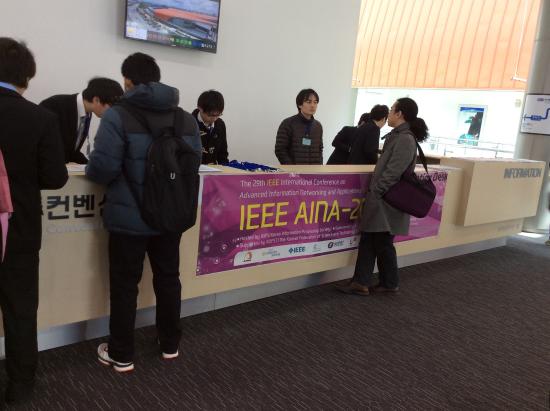 We were part of a delegation attending a regional scout conference at the venue. Location was good, half hour walk from our hotel or a short bus ride on the conference shuttle.
Venue had the capabilities to host many events at the same time, since there was also a tea convention and baby products convention at the same time.
Dining room was very big, many breakout/seminar rooms, handicapped friendly restrooms, lifts, escalators, even live musicians performing in the lobby on certain days of the week.
There are places to eat near the convention center

Opened in 2015, the Asia Culture Center is a world-class cultural complex specializing in cultural exchange, collection and study of cultural materials, content creation and production, Exhibitions, Performances, archiving, and distribution, all focusing on Asian cultures.

Asia Culture Center is the must-see place in Gwangju. They have a good quality of Performances and Exhibitions with low cost, even with no money. The architecture itself is impressive and big enough to take your heart. One of my favorite place in ACC is Library Park. They collected videos, books, pictures about Asian culture and produced about ten spots with specific topics such as 'electronic shopping mall in Asia', 'History of performance in Asia'. They have many books and materials in English and other languages, so people who cannot speak Korean can also enjoy this place. Library Park is a free space, so feel free to use at any time. ACC is near to the downtown-Chungjangro, and the hipsters' place, Dongmyeongro-, so it is nice to use your free time. 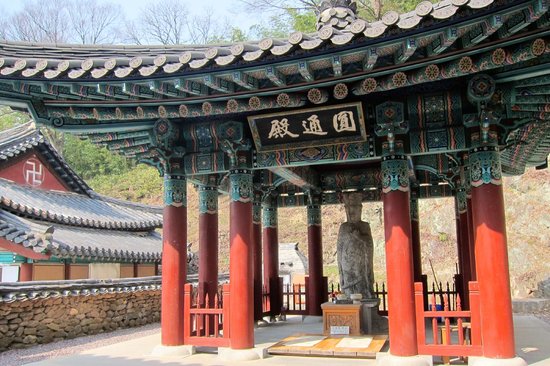 A lot of temples in Korea look alike. That said, this one was well maintained and not very popular despite being beautiful. Stop by for a moment of peace. The monks here were rather friendly, perhaps because they don’t get as many tourists as the other temples we have been to do. 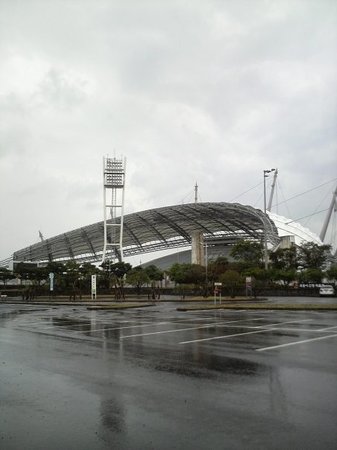 The World Cup Stadium is a fantastic arena that was a cauldron during the Football World Cup in 2002. Since then it has rarely seen the same attention. Gwangju has only recently formed a K-League football team and with little full time support in a city obsessed with baseball and the Kia Tigers match days can feel a little souless. There is a park and a large shopping centre right by the stadium and you can take drinks and food in which is great. The tickets are also cheap at 10,000 won.
If you have a spare couple of hours in Gwangju on match day then grab a pizza and some beers from the store next door and give it a try but I would not make it a "must do" by any means.