Where to eat Pub food in Famagusta: The Best Restaurants and Bars

Discover Restaurants offering the best Pub food in Famagusta, Famagusta District, Cyprus. Famagusta /ˌfæməˈɡʊstə, ˌfɑː-/ (Greek: Αμμόχωστος locally [aˈmːoxostos]; Turkish: Mağusa [mɑˈɰusɑ], or Gazimağusa [gɑːzimɑˈɰusɑ]) is a city on the east coast of Cyprus. It is located east of Nicosia and possesses the deepest harbour of the island. During the medieval period (especially under the maritime republics of Genoa and Venice), Famagusta was the island's most important port city and a gateway to trade with the ports of the Levant, from where the Silk Road merchants carried their goods to Western Europe. The old walled city and parts of the modern town presently fall within the de facto Turkish Republic of Northern Cyprus in Gazimağusa District, of which it is the capital. It is also notable as the birthplace of the eponymous hero of the Renaissance proto-novel Fortunatus.
Things to do in Famagusta

Our coach trip stopped here for lunch. The food was very good considering the number of people arriving at once. Good mezzo to start. They were a little slow getting our drinks out but food was very acceptable. Loos were ok. One was ok. The other seemed to be a loo seat with a hole beneath. Good for large groups Located on Salamis Road opposite the main gate of Eastern Mediterranean University in Famagusta. A great place to have your coffee and breakfast. Their menu is loaded with tasty and beautiful dishes, international snacks, and delicious ice cream. Wonderful atmosphere and live band. 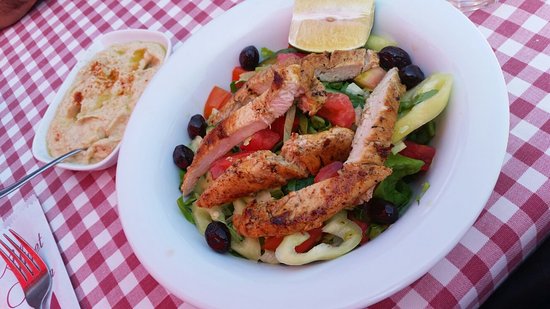 Attended for lunch. Premises looked smart but quality of food lacking.Starter of hummus which was consumed with salad from a bowl which looked as if it had been there days. Chicken kebabs followed being skewers of chicken which proved barely cooked and boiled rice.My partner had lemonata which tasted of diluted Jiff lemon.The highlight? When the waiter asked us to keep our cutlery to use for mains having been used to taste (a little) hummus..I suggest avoid. We came across the Canes whilst out walking the lovely boardwalk between Protaras & Pernera. The first time we just stopped for drinks (Leon & a gorgeous ice cream frappe) but decided that the place was so lovely that we would return for lunch another time. There are lots of different seating zones to the place so you can chill out on a comfy seat or sofa and relax with a drink watching the sea or sit at a table and eat a meal. The first time we visited was a local bank holiday so it was a joy to see local families enjoy their time together. There's a kiddies play area and ice cream parlor too! Facilities were clean. We would definitely return to Canes next time we visit the area!