Where to eat Japanese food in Nieuwegein: The Best Restaurants and Bars

Discover Restaurants offering the best Japanese food in Nieuwegein, Utrecht Province, The Netherlands. Nieuwegein [ˌniʋəˈɣɛi̯n] ( listen) is a municipality and city in the Dutch province of Utrecht. It is bordered on the north by the city of Utrecht, the provincial capital. It is separated from Vianen to the south by the river Lek and borders on IJsselstein in the southwest and Houten in the east.
Things to do in Nieuwegein 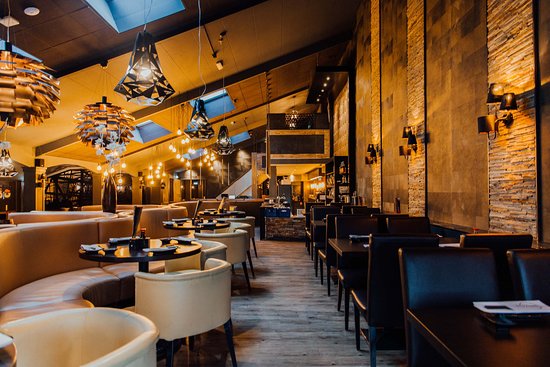 This is a big sushi restaurant, and they even have multiple shifts in order to cater to all the people. I would not consider this a romantic restaurant, although I noticed several couples sharing dinner.The quality of the food is average. Sushi, maki, and all the usual components; nothing extraordinary though. It is certainly sufficient with the "all you can eat" approach. Pricing is OK; note that they make a profit with the drinks.Bottom line: not my style though OK for a one-time visit. 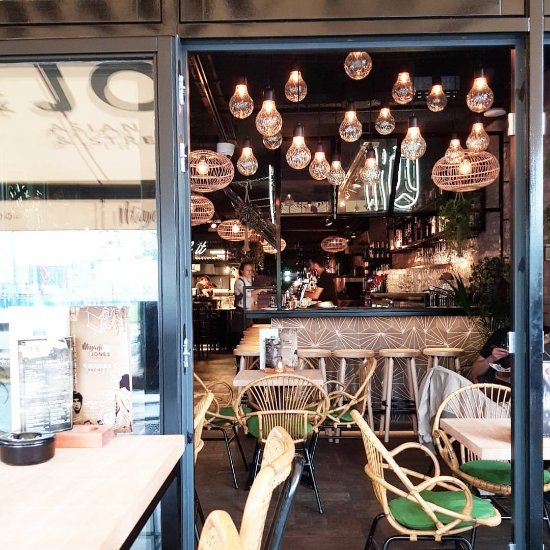 Miyagi And Jones Is The New Hotspot In Utrecht. Situated At Veemarktplein 42 You Can Enjoy Our Fine Wines, More Than 30 Special Beers And Of Course Our Asian Streetfood; Asian Dishes With A Western Twist. In Our Sturdy And Innovative Interior You'll Have

Overall it was a good experience. The options were plentyful and the food was good. At the beginning of the meal the server said that we would be "stuffed" by the end because it was a big meal but it was not as filling as we were expecting, though it was still satifying.There were a lot of flavorful dishes and we enjoyed almost all of them. We were just annoyed with how much ganish appaeard on some of the dishes. With the char siu, you couldn't even see the meat when they placed the dish down because it was just covered with bell peppers.Other than that, the tables were just a touch small for the size of plates they were serving on. I felt like they were overcompensating the portion sizes with garnish and larger plates.Aside from those details, we would still recommend this restaurant and would definitely go back! 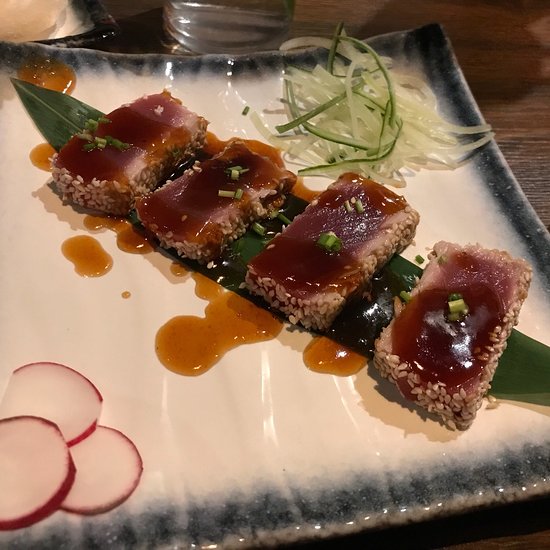 We had the 15 euro 4 course special which consists of 3 times sushi and desert. Although we were the only people in the restaurant that day the service (kees) was super friendly and the food was great: just honest combinations and a surprisingly good desert.They also have a 20 euro monday dinner special which we will definitely try sometime.

Most Popular Chinese food in Nieuwegein, Utrecht Province, The Netherlands 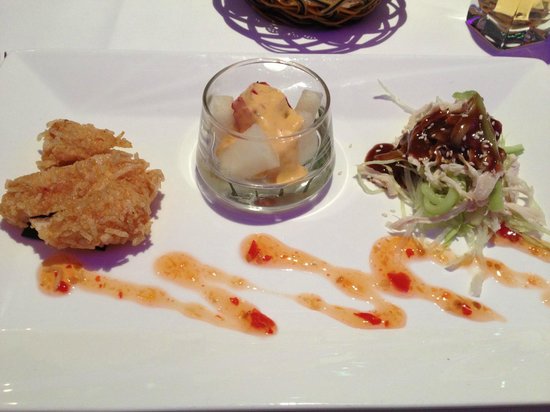 One Friday evening, a man and his daughter walk into a Japanese/Chinese restaurant â not the beginning of a joke, but yesterdayâs events. We came without reservations, but quite early, just before 6AM. Still, the Japanese restaurant (ground floor) was booked full. The friendly man in the reception then brought us up the stairs to the revolving restaurant floor where the Chinese foods are served. We were the third party in whatâs quite a roomy, atmospheric place, with soothing Asian music at a pleasantly low volume. While the view from the restaurant is nothing special, the revolution means there arenât good or bad tables â they all move across the top of the stairs, and along the bar/till area.We both ordered a soup to start: Hoi Sin (seafood) and Wan Tan (broth with meat-filled dough balls) with mini Chun Kuun (a plate with four Cantonese mini egg rolls). The broth was somewhat tasteless, but the Wan Tans were delicious. The sea food soup was exquisite, with minute rings of fresh leek to contrast with the surimi, shrimp and fish, in a delicious, viscous fish broth. The little egg rolls were little crispy treats, with fresh fillings of chicken, bamboo and cabbage, with an accompanying sweet-sour sauce with sharp peppery undertones.We chose green tea and Chinese Tsingtao beer for the main course. The ability to vary by ordering two half main courses per person is greatly appreciated! The waiter and waitress were both very friendly and informal, in a way that suits us very well.I had Szechuan Ngau (beef with Sichuan seasoning) and TÃ³ng Koe Yu Pin (fish with Chinese mushrooms) with a side of Chinese bami (thin baked mie with bean sprouts). The two portions were neatly separated on the tray by a little cucumber slice wall. The beef was slightly chewy, but with great seasoning, in a tasty soy based sauce and with plenty of fresh vegetables. The fish was expertly cooked, in a tasty sauce with green pea pods, carrot and big chewy mushrooms. The Chinese baked mie formed the perfect side dish, to cleanse the pallet when switching from fish to meat and back.My daughter had Hak Tjiew Ngau (beef in black pepper sauce) and SÃ¡n Chauw Kai (chicken in sweet/sour sauce with pineapple). The beef was also a bit chewy, but with great, peppery sauce and fresh vegetables (bamboo, mushroom, bellpepper, red pepper). The chicken in sweet/sour sauce was heavenly, with fresh slices of pineapple and bell peppers. Here, the bami (Indonesia style baked mie) wits some bits of egg, ham and bamboo also proved a good side dish to clean the pallet.The portions were well sized. When we finished our plates, we had slightly overeaten (as is not unusual with Chinese/Indonesian food) so we skipped the dessert. On a separate note: I found the Chinese Tsingtao beer went quite well with the oriental food, even better than the customary ânormalâ beers, as itâs fresh with an extra hint of sweetness that reminded me of lychees.The man at the reception kindly wished us a very good day as we went down the steps and out the door to our parked car. All in all, one of the best Chinese restaurants weâve visited in a long time! 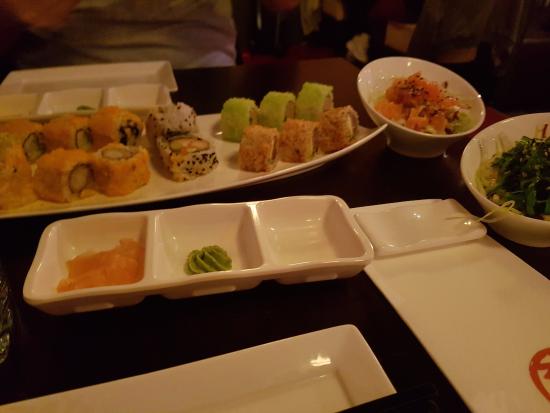 Very nice sushi bar. Excellent selection of different sushi. Nice interior and friendly staff. Only problem is that the whole ordering process is done from a tablet and that obviously doesn't work properly as we were constantly receiving someone else's orders. Still our orders (the correct ones) arrived quite fast so it wasn't a huge deal. I would suggest though to fix this. Maybe to someone else it would ve very annoying. 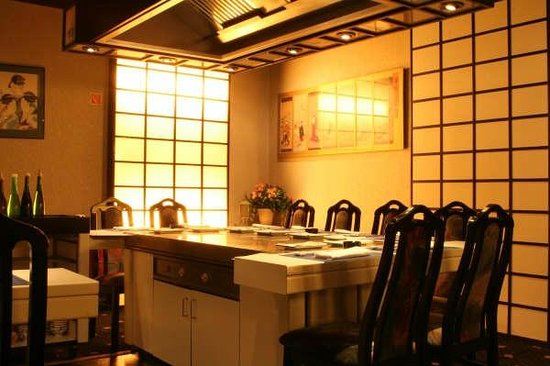 Like much of the Netherlands, the food here can be what is termed "Indonesian-Chinese"...but stick to the normal Chinese menu (predominantly Cantonese style) and you will be OK. The food was pretty good, if a little mild for those used to good Asian food. The restaurant is huge, and has a 1980s "Chinese Dynasty" feel to it. Good service. If you need some spice in Nieuwegein and can't be bothered to make it out to Utrecht, go here. It's not an obvious choice - but it will do the job.Note that they don't serve tap water (expensive bottled water only), and that if you ask for an extra chilli on the side for added spice, you will be charged EURO 3.