Top Things to do in Wellfleet

Where to Eat in Wellfleet: The Best Restaurants and Bars

Wellfleet is a town in Barnstable County, Massachusetts, United States, and is located halfway between the "tip" and "elbow" of Cape Cod. The town had a population of 2,750 at the 2010 census, which swells nearly sixfold during the summer. A total of 70% of the town's land area is in protection, and nearly half of it is part of the Cape Cod National Seashore. Wellfleet is famous for its eponymous oysters, which are celebrated in the annual October Wellfleet OysterFest.
Things to do in Wellfleet 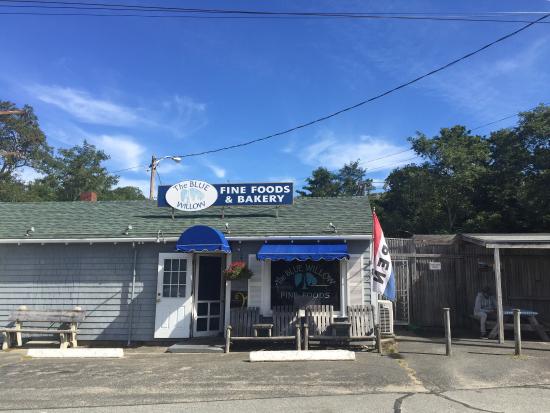 The Blue Willow is a small, friendly, fabulous bakery in South Wellfleet. In my opinion it vastly outshines the nearby PB. The cinnamon buns are astounding but everything here is terrific. A good stop at the end of the bike path, or on your way to the beaches along Ocean View.

PB Boulangerie Bistro is an award-winning Zagat-Rated French Bakery, Pastry Shop, and Bistro. Our Chefs use traditional European techniques to create specialty hand-crafted products, and the finest French cuisine with only the best natural ingredients. A taste of France on Cape Cod!

We had a wonderful Thanksgiving meal at PB. We've been many times for breakfast, on day trips from Boston, but decided to spend a few days over Thanksgiving in Wellfleet and PB was the obvious dinner choice! A lovely meal complimented by fantastic service. This...MoreThank you for joining us for your holidays! Thanksgiving was a treat for all of us at the Bistro! We look forward to serving you again! Merci! 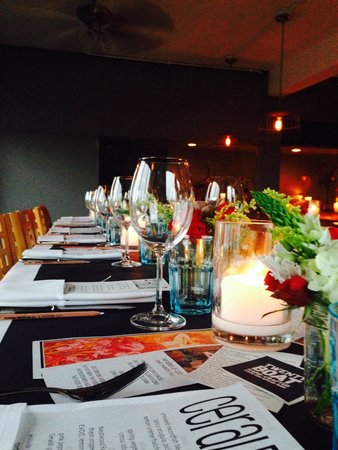 CERALDI offers a new dining experience on the Wellfleet waterfront. Critically acclaimed Chef Michael Ceraldi creates a 7-course nightly menu, crafted from the season&apos;s finest and freshest locally sourced and foraged ingredients. The beautiful Wellfleet waterfront atmosphere allows for a convivial and relaxed atmosphere, where all diners enjoy sitting at the chef&apos;s table.

I had waited all summer for this culinary adventure with whom Chef/owner in my parts would be called a "mench". He spoke with an introduction defining his farm to table practice and described the experience we would partake in with the thoughtful seven course locally sourced wine pairing meal. In retrospect I would summarize the experience as this...beautiful atmosphere with soft romantic relaxing lighting, perfect background music from the wordless tunes to the volume. Clean food and bend over backwards to accomodate all dietary needs. Three hours is a long time to dine....two and half would be perfect. The 8:30 reservation is again at least 30 minutes to late and personally I prefer vodka over wine so not having a full bar is a disappointment. Overall you have to give this place a try, I promise they will not disappoint. But...this is the last weekend of the season so put it on your culinary bucket list for 2018! 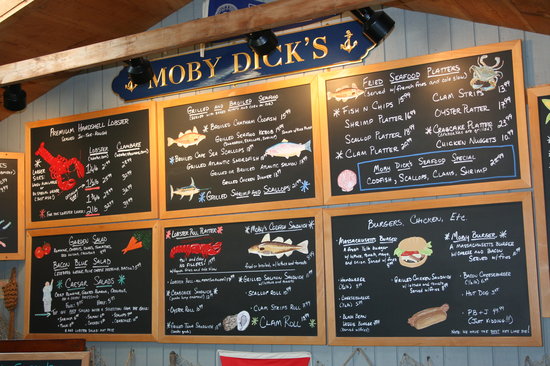 Closed for the winter. See you May 2017<br><br>When we first opened Moby Dick’s in ‘83, we had no idea we’d become an establishment on Cape Cod. We simply wanted to start a BYOB restaurant that had fresh seafood, a relaxed environment, and a friendly staff that would make people feel at home. Well, three decades later, we’re still doing exactly that, opening every season in May to the delight of locals and visitors alike. Some people stop in for our lobster rolls while others come for an old-fashioned bucket of steamers. But everyone knows they can come to us for fresh family fun and a dining experience in Wellfleet they&apos;ll never forget.

There were eight of us on a Saturday night, so we had to wait about a half hour for a table, which turned out to be upstairs at a large picnic table. Ordered at the counter before being seated, and food was brought to us....MoreAntonia, thanks for coming by for a visit! It's wonderful that you all enjoyed yourselves this much. Hope to see you all next season for a great meal. Love and lobster rolls, Todd B, Owner

Hidden away behind the Chocolate Sparrow on Main Street, A Nice Cream Shop is just the place for a cone or shake or a cold drink on a warm summer evening. Very good choices of ice cream and sorbets, served in cups, cones of waffle cones (ala Emack & Bolio's menu) to please the taste of everyone. Efficient and welcoming staff operating out of two windows in the back of the house. Limited seating so cross the street to a bench to watch the tourist traffic in Wellfleet. 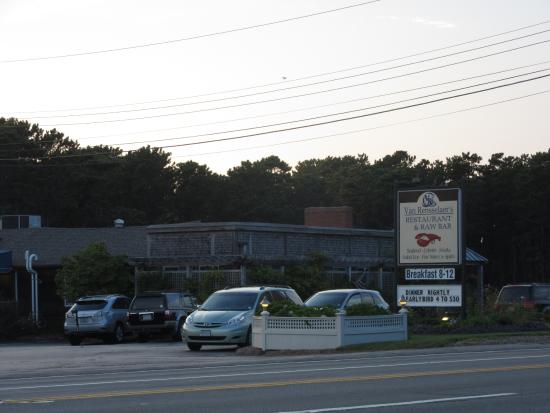 7:30 reservation. Seated in five minutes of arrival even though the restaurant was packed. The host was most gracious. Quickly attended to by Lisa, our waitress with water and drink orders and bread/butter. All 3 of us had the Bistro cut (small) of Prime Rib....MoreGlad you enjoyed everything. Look forward to your next visit. 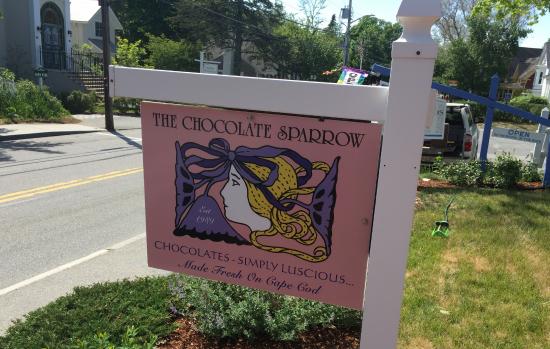 We have been coming here since they had penny candy, and it's always fun to browse through the handmade and commercially produced items. I prefer the handmade chocolates and of course the fudge! This is the best fudge I've ever eaten! It's so good that every time I get fudge anywhere else, it's not at all good compared to this. I'm spoiled for life by their amazing fudge. A lot of flavors, too--chocolate with various additions, penuche with various additions, etc.

Mac&apos;s Shack is all about the pure goodness of the season&apos;s local harvest. Your taste buds will shout "hello summer!" Ice cold Wellfleet Oysters, tender lobster dripping with butter, mouthwatering sushi, and the freshest seafood served on the Cape - made exactly how you like it. This is the kind of food that makes you happy.

My wife and I were in Wellfleet for the Oyster Festival, visiting from Long Island. Ate here Friday night and we shared a bowl of steamers first. Plump and delicious, served with melted butter and clam broth. I had the fried oyster dinner. Maybe the best I've ever had. The coating was just perfect, as were the oysters. My wife had one of their nightly specials. It was a Thai style dish with noodles, vegetables, scallops and shrimp.
We were impressed with the meal and the atmosphere. Inside was hopping as was outside under the tent covering. A "can't miss" on the Cape.

A dining experience at Winslow&apos;s begins with a warm greeting from Tracey Barry Hunt, the General Manager who oversees "the front of the house." A former documentary television producer and director, Tracey loves speaking with guests and sharing local knowledge about her favorite spots on the Cape. Winslow&apos;s menu and wine list are created by South African born Chef, Phillip Hunt, Tracey&apos;s husband. Phillip is always happy to share his passion and vast knowledge of wine with guests interested in recommendations and food pairings. On any given day Tracey and Phillip&apos;s two young sons, Hunter and Romanee (our grill and saute cooks for the 2020 season!) may also make an appearance at Winslow&apos;s to pick some herbs for Dad or entertain the staff and guests with Mom.

We went for a cool August lunch and ate outside. Our waitress forgot half our order, including drinks and never checked back with us. She was young and sweet, but untrained. Food was very slow to come out. Lunch was ok, but not amazing. It was nice to eat outside and thankfully we were not in a rush. I sent the family to shop while I waited forever for the bill to come and pay it. Likely won't return despite friends raving about it.

We enjoyed a lovely day trip to Cape Cod and stopped at The Wicked Oyster for an early (5:30) dinner. The restaurant was an attractive space -- didn't try to be more than it was, which is an interesting old building complete with uneven floors that felt like part of the landscape. Loved that. It was empty when we arrives, but the snooty hostess treated us like second class citizens because we didn't have a reservation. Pointedly seated us at the least attractive table in the dining room. No "thank you, please come again" when we left. The waitress was delightful and very knowledgable -- lovely, helpful, unintrusive. The food was uneven. Calamari was quite greasy. The corn pudding with heirloom tomatoes and balsamic reduction was a great idea, but rather watery and therefore lacking flavor. The stuffed sole was tasty. The scallops were slightly overdone, but the risotto with sunchokes was truly delicious. Servings were just right to generous. Good beer selection, a little less interesting on the wine list side. Cocktails looked interesting, but we didn't indulge. Overall, an interesting and more than adequate, if uneven, experience.