Where to Eat in Tangier: The Best Restaurants and Bars

Located on the Strait of Gibraltar where Africa meets Europe, Tangier has long held strategic importance. Ruled through the centuries by waves of conquerors including Romans, Vandals, Byzantines, Arabs and Portuguese, the city is more than two and a half millennia old, making it one of North Africa's most ancient. The medina, kasbah, bazaars and souks are among the country's most vibrant, and the beaches are excellent. In the last century, Tangier became a hot spot for the international jet set.
Things to do in Tangier

I visit this restaurant every now and again, invariably at lunchtime. The ambiance does not vary. It is a small restaurant (40 covers max., and that includes some ten seats upstairs). Even the daily, 'specials' menu, on the blackboard, has been the same everyday for the past week...........
It is not genuine Italian food, prepared by a trained and experienced Italian chef. However, the food does have an Italian flair to it. The wines are reasonably priced, and the service is OK. From my observations it seems that guests seem to choose the ravioli options, and even share a dessert.
Unfortunately, today, I chose escalope alla Milanese. It was not a particularly happy experience: it consisted of three small overcooked, dried up pieces of meat, badly breadcrumbed, with some fries and some French beans. Very uninteresting, very unappetitizing, and certainly not at all inspired by Italian cuisine. I should have just left it on the plate, and walked out..................
This is a sort of 'cosy', local restaurant patronised by Tangerinas - but they really deserve a better and more honest Delivery. 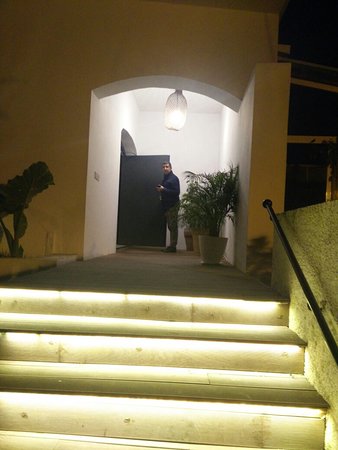 Spectacular restaurant in the upscale California area of Tangier. Elegant inside, and beautiful Terrace lined with bamboos and palm trees outside. We opted to have dinner inside since it was a bit windy initially, but had dessert and after dinner drinks on the Terrace and both were great, but the patio is really beautiful and the weather was great. The patio was completely full so it seems that the restaurant is quite popular. We were very very happy with our meal. We had the salmon, cooked to perfection with grilled vegetables, and the beef fillet, also flawless. Then cheesecake for dessert. Our waiters Ennis and Waam (forgive the spelling!) were wonderful although they spoke mostly French and we mostly English - but it all worked out well. My husband was able to smoke his cigar on the Terrace so he was more than happy. This is a great restaurant. So happy we ignored the few not so great reviews, although I did notice that they were old reviews. 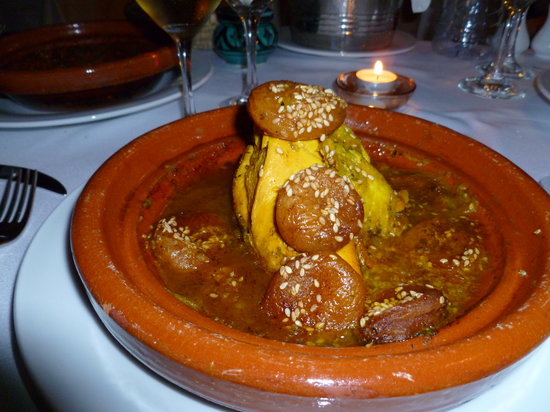 When we complained about the food, the owner called us "Arrogant"! We asked to speak to the manager after having a terrible meal simply to provide constructive criticism. The meat was chewy and the vegetables were overcooked. Instead of apologizing or offering something else from the menu, the manager claimed the meal was perfect and that we didn't know anything about Moroccan food. "Well, we have good reviews on tripadvisor" he repeated. We just asked to pay our bill and leave. Then we spoke to the owner who again took no responsibility and proceeded to call us "Arrogant". No matter how wrong you think a customer is, you should NEVER insult someone like that. We didn't call them any names so I don't understand what right he has to treat us this way. This is by far the worst place I've eaten in my 16 days in Morocco. We were expecting a fantastic, fine dining experience and instead received cheap fast food. Stay far away from this tourist trap! 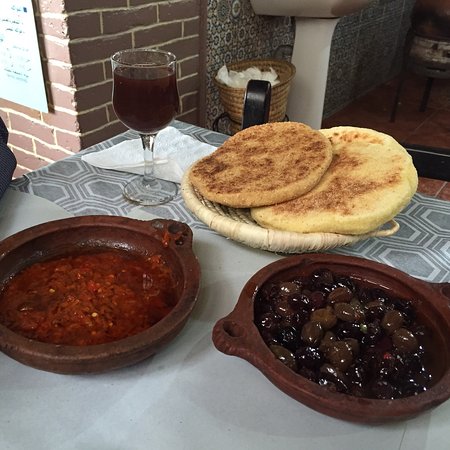 Tucked away on some steps just outside the south of the medina, we only saw this place on the basis of a recommendation from our Riad hosts
Once you enter, you'll be seated and the experience begins. There is no menu, the food is the food, and boy is there a lot of it. You'll get a lot of the authentic nibbles to start, soup, a sizzling fish dish, and then a whole massive fish, followed by desserts, yes plural! So make sure you arrive on an empty stomach, as the flavours are so good you'll want to enjoy them all.
To top it all off, we were given some mementos to take with us that really do sum up the vibe of the place with is warm hearted.
There are few places in the city doing such a roaring trade that still manage to feel authentic, but this place is one of them. Go! 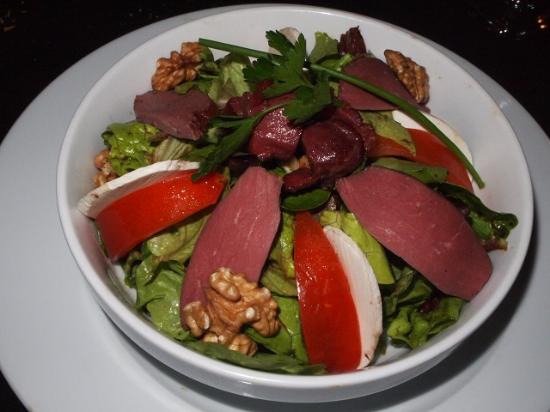 A very nice warehouse type venue, which is surprising for Morocco.
Nice staff and artwork, a little too much space upstairs.
Staff need to be more careful with food orders, get the correct dish and also make sure food is cooked as requested.
Nice food mom the less.
More interest from staff, would also help.
A nice bar area with resident cat, was nice.

The iconic cafe with the curved exterior and external Seating is a must-visit in Tangier - for people watching and generally watching the world go by. We must admit we were there as it was one of the locations in Bourne Ultimatum :) The drinks are a tad pricey, but you can stay there for as long as you like. Initially, we couldn't get a seat outside so sat indoors - it's a lot larger than you think, with comfortable Seating. Then we zipped outside as soon as we saw a table free. Service was a little slow when we were trying to pay, as the waiter who served us had to be the one who collected the payment (and I imagine the tip). There is no rush from the cafe for patrons to leave, so take your time and enjoy the ambience of the place and step back in time (or into the movies) at your own leisure! The restaurant is quite close to where we are staying and has a high reputation so we went for lunch. First time visitors like myself might not realize how huge the place is... we sat down beside the kitchen pass amongst a few other tables with some other diners. The menu is fish oriented with lots of choices. We thought a Frito Misto, mixed fried fish platter would be good to share and it was reasonably priced. Fresh baguette with tapenade, while we waited was great. The platter of fish came, presented nicely in a way that was easy to share. All the elements of the dish were perfectly cooked. They didn't really seem to be seasoned much, so everything tended to be a bit plain, but again, nothing was wrong with how it was prepared. The major issue with the entire dining experience was the behaviour of the staff. This is a big restaurant, there were a lot of staff on hand... but not working. Waitresses talking to each other, talking to one of the Chef's over the pass. Biting their nails, looking bored, rolling their eyes when they had to clear the one table beside us when those people left. I'm sure that in high season everybody works very hard at their jobs but the low season customers don't want to be able to see that they are being treated as an imposition to the waitstaff's day. Send people home if it's not busy, have a staff room away from the customer's sightlines... whatever it takes so that the customers don't feel like they don't matter. Which is what happened to us, and it's why we didn't order main courses after this, the way that we were going to. Don't they realize that it's just money walking out the door? There are plenty of places for tourists to spend their money but it's a good idea to make them feel welcome while they are doing it. 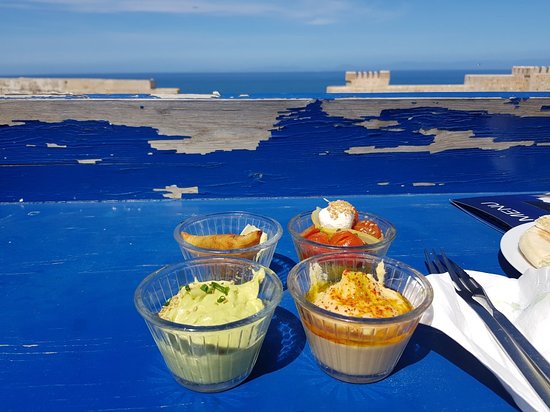 A bit of history about Le Salon Bleu and The Kasbah Neighbourhood This quaint traditional Moroccan house is situated directly in what used to be the ancient stables of the Sultan`s Palace, and for a long while it had also served as a home for visiting British diplomats. The celebrated 17th century writer Samuel Pepys was notorious for writing endlessy in his journal under the fig tree just next to the small courtyard. Francis Bacon had a painting studio on the same street and the Rolling Stones lived just a stones throw away. The Kasbah has long inspired writers and artists of the twentieth century: Matisse, Delacroix, Kerouac, Jean Genet, William Burroughs, Paul Bowles... so we`ve opened up this small salon and restaraunt so that you may drink coffee and enjoy the ocean view while resting in their proverbial ribcages. Le Salon Bleu has been highly recommended by the international press and tour guides: New York Times, Le Monde, Liberation, Le Figaro, Lonelyplanet, Guide du Routard, Guide Michelin, Elle, Marie-Claire, L&apos;Officiel, Vogue...

This restaurant is nicely decorated and has some gorgeous views over Tangier Harbour. It was perfect for our first night there. We only had a light snack, salad and hummus, which was a little bland. How they had delicious fresh juices and the service was fine. 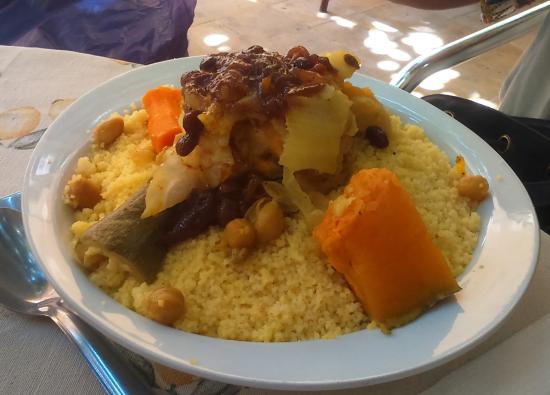 Spent a walking day in Tangier and were lucky enough to be guided to this location for a delicious meal. This organization supports women as they develop marketable skills ... the beautifully prepared tagine and other dishes were well worth the visit. I would go back if I had the chance! 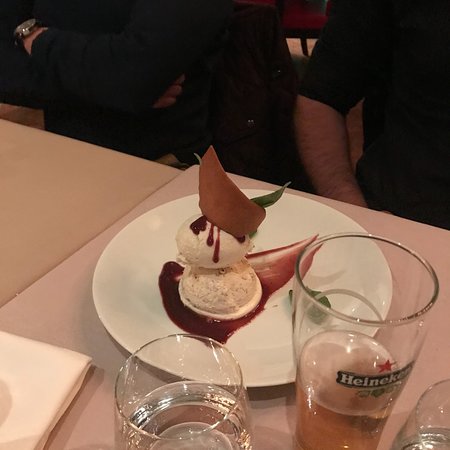 Dinner at the El Morocco Club was like stepping back into Paris. The food was creative French food, with full of flavor and a nice switch from all the traditional Moroccan fare...not that there was anything wrong with that. The night we were there, virtually the entire dining room was French.