Where to Eat in Medina-Sidonia: The Best Restaurants and Bars

Medina-Sidonia is a city and municipality in the province of Cádiz in the autonomous community of Andalusia, southern Spain. It is considered by some to be the oldest city in Europe, used as a military defense location due to its elevated location. Locals are known as Asidonenses. The city's name comes from Medina (Arabic for city) and Sidonia (of Sidon), meaning "City of Sidon".
Things to do in Medina-Sidonia 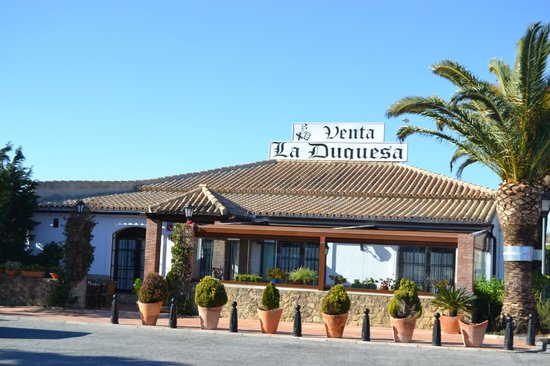 Venta la Duquesa, located in Medina Sidonia at the south of Spain, is a family restaurant that combines two generations, allowing the perfect fusion of traditional cuisine, typical of the area, with touches of art representative of the new kitchen. La Duquesa can not be understood without all that surrounds it and gives it meaning. Working with the best local products, among which game meats, both larger and smaller, Retinta famed beef and vegetables freshly picked from the garden of the restaurant.

Visited at Sunday lunch time en route from Gibraltar airport to our villa near Chiclana. Roadside Venta that looked like our kind of place, the staff were so welcoming even when busy. We returned the following Sunday having picked up family for the same journey and even though it was later, the bar area was packed, we were soon sitting behind ice cold beer and tapas. As usual, there is a formal dining room which looked nice and an amazing menu choice to suit anyone. Their tapas dishes were very inventive and so tasty, we tried various including kidneys in sherry, anchovies, red pepper stuffed with monkfish and prawn. Plates cleared every time, food was really a sexual treat and the bar had great ambience with tributes and pictures ref bullfighting. Will definitely return next time on this route. 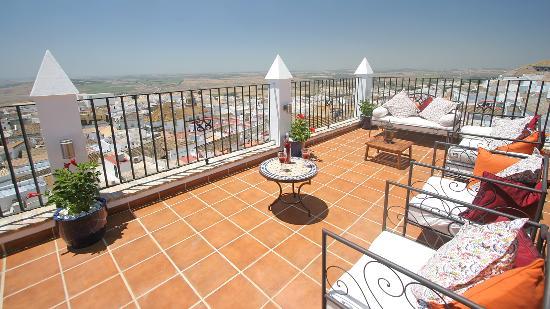 As the name suggests, the terraces offer magnificents views over a patchwork of undulating tiled roofs and church spires to the rural splendour of rolling hills – fringed by the Atlantic Ocean. On a clear day you can even see the Rif Mountains of Morocco shimmering in the distance!

I have been going to this restaurant over past 16yrs as I have a house in this little town.
There have been several changes of ownership and names of this restaurant.
Four of us visited last Monday and we were all disappointed with one thing or another,
the service was sloppy little care and attentiveness was sadly lacking. We had to ask for cutlery for both courses whilst the hot food went cold, albeit two of the main course dishes were less than Luke warm to start with. My cod was suppose to have a herb crust and be oven roasted a sprinkle of pesto was not matching the dish description and it certainly had not been shown the oven.
. The menu to us was rather strange at times my brother is a "Master Chef " and he like us felt the prices were expensive nowhere near reflective of the standard or quality of the food served.
It is such a shame as this restaurant has both a Terrace and conservatory providing spectacular views right down to the bay of Cadiz. There is a car park that wasn't easy to access due to road closures so off street parking was a real challenge. The other sad thing we have noticed over past few years is the Spainish locals come for a drink but don't seem to stay to eat. All in all we felt this was a disappointing lack lustre meal, 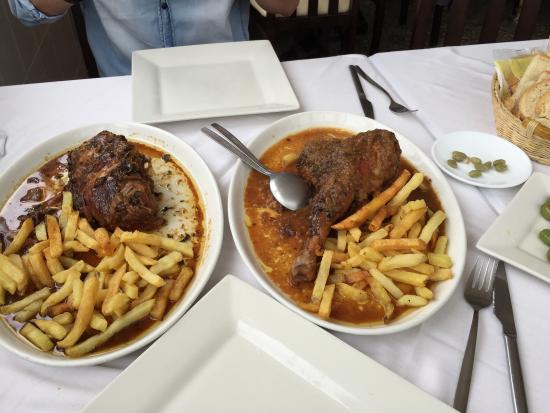 This is one of the best restaurants in Medina Sidonia. Family owned and ran business that specialises in meat dishes and have excellent dishes to choose from. Its location is near the top square, beside the nunnery. Offers car parking facility and the prices are somewhat in the mid range but totally worth it. The interior decoration is elegantly decorated with the Medieval theme, giving its mark true to its name of "The Castle" We had a good meal here but you do have realise that it is a traditional Spanish restaurant and not a tourist trap. Good service, hearty food and traditional surroundings spoilt a little by the fact that we were, for most of the time, the only customers! We English eat too early as, in this part of Spain, they start much later than we are used to. But the Bulls Tail Ravioli.....excellent!! 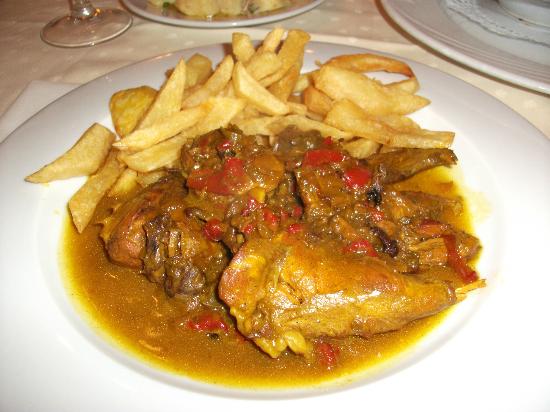 This bar was very close to our apartment and our landlady recommended it to us. Apart from the fact that it was pretty drafty (we went in November), our experience was very positive. We had some tapas which were not expensive at all (3 €) and tasted delicious. Try "albondigas de retinto", meat balls made of local beef. We also recommend the beef hamburger. There seem to be mostly local people and the atmosphere is very authentic. Nice place to have tapas in the pretty town centre of Medina Sidonia. 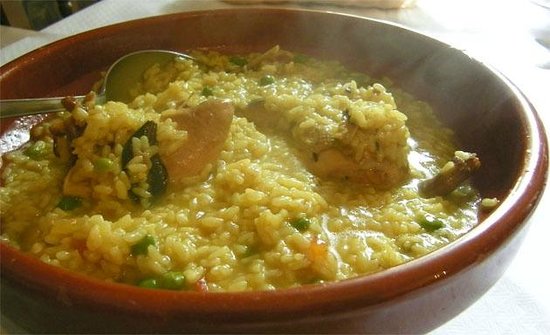 Reviewed By Bill B - Marbella, Spain

I don't think we have had a better arroz caldosa, (think paella with liquid and game instead of fish), anywhere. We had the 1/2 pheasant is, serves 2 people and you wont finish it. Other options include partridge, rabbit and chicken. Very popular venta and people drive to it from miles around, often see Gibraltarian's there and that is a good hour away. Really is a family run place with the matriarch purveying all around. A big thumbs up. 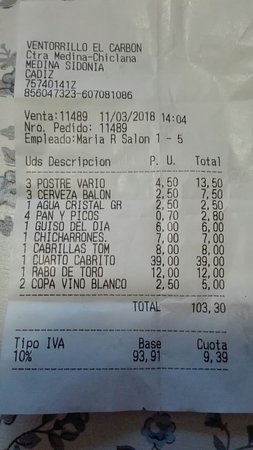 Wanted to visit this restaurant, but the location coordinates took me to a roundabout, outside of town. After two or three tries, gave up and moved on. Dissappointing tesultour establishment has not had problems of location yet, (Carretera Medina-Sidonia, Km 2,2, 11170 Medina-Sidonia Spain TELEPHONE+34 856 04 73 23) it is incredible that a business is valued without getting to eat 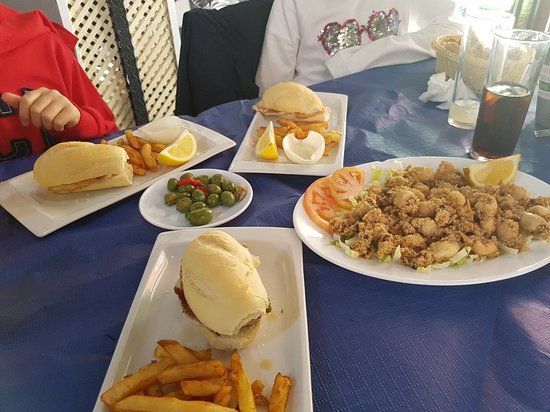 New Years morning and needing coffee it was the closest place open. Great coffee but I did not fancy the lard that appeared to be spread on the toast. Great location in the town square. 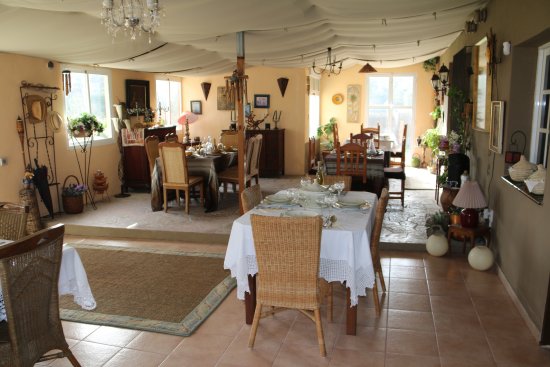 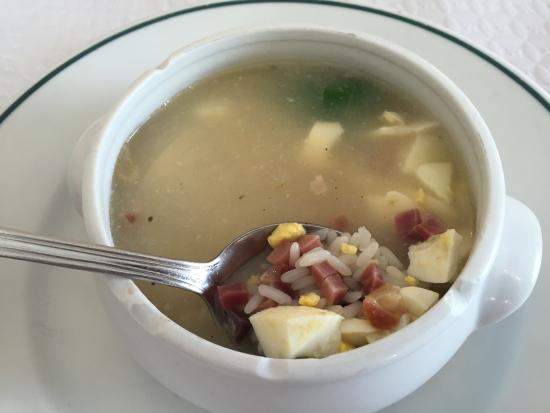 Amazing breakfast! You can have a huge toast with nice kind of butter. Everything natural. Really cheap. I go everytime that I travel to Cádiz.