Where to Eat in Kruklanki: The Best Restaurants and Bars

Kruklanki [kruˈklanki] (German: Kruglanken) is a village in Giżycko County, Warmian-Masurian Voivodeship, in northern Poland. It is the seat of the gmina (administrative district) called Gmina Kruklanki. It lies approximately 12 kilometres (7 mi) north-east of Giżycko and 100 km (62 mi) east of the regional capital Olsztyn.
Things to do in Kruklanki 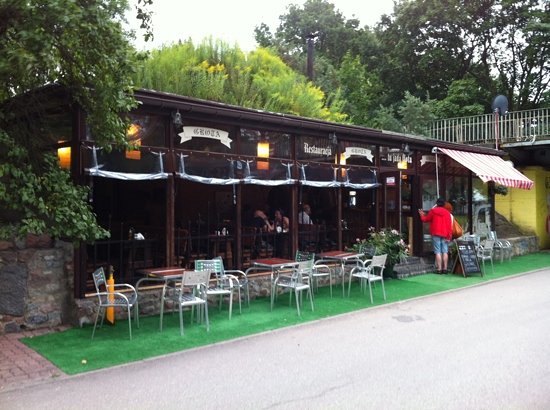 Very good pizzas (seriously) and very nice staff (no English speaking but made it to understand us keeping always a smile, so that's what counts at the end)... The fish was also ok... The price was fair enough and the spot, near the canal relaxing and lively. I would really recommend it. 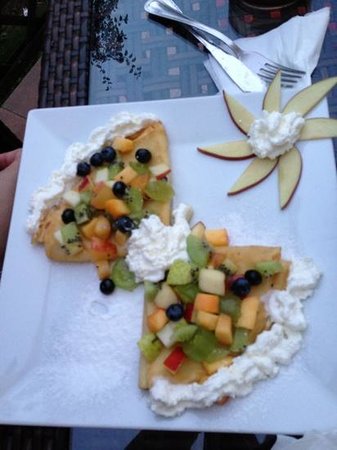 Had breakfast and dinner here. Extensive menu. The beetroot soup is poorly done with what seem like frozen pierogi a/dumplings included. The meat dishes were hearty and tasty and you could easily share for two. Breakfast was good, standard fare with hot and cold meal options, we thought the coffee was good. Staff didn't speak much English but try to help, although one of our meals was plain forgotten. If you want something cheaper for dinner there are a couple of kebab shops around the corner. 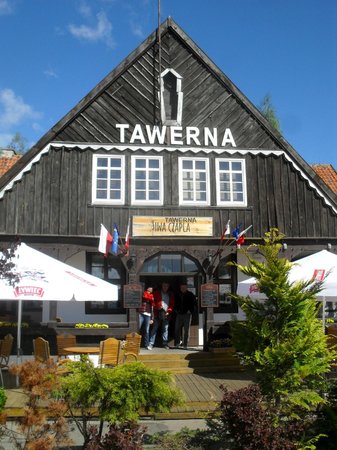 Reviewed By Maciej B - Brussels, Belgium

Fantastically located restaurant (with a view both on the lake and the canal) and very nicely arranged. Tasty food but the way it is served (the size of the portions) is disappointing. Many meals from the menu were missing. The staff was not attentive and rather slow (even though there were no crowds at the time we were there). 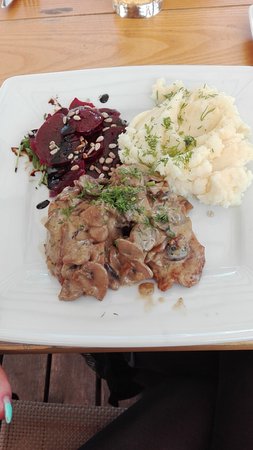 Very delicious food. And although they were preparing for the party this evening, they were very kind to let us in and eat. The staff was very polite, and despite the waitress didn't speak much English, she was very helpful. Good service. Excellent food. This is the best lunch place in whole Poland. You will simply love it. It used to be some kind of bar mleczny when I was very young (http://en.wikipedia.org/wiki/Bar_mleczny), now upgraded it still retained some of this style. Located in the center of Gizycko. About 5 minutes walk from the port. It has excellent chlodnik soup, fish soup, pierogi and pancakes. Very popular among locals (they cannot be wrong) and tourists so you might have to wait a bit to get a table or order but do not hesitate even for a second. It is worth it, you will never regret it. It is best Polish food at very decent price. 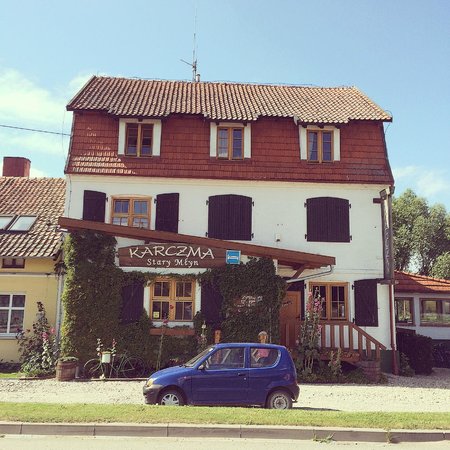 Old Mill - a charming place near Gizycko in the region of "Great Lakes Country" - Mazury. On the main floor of the 19th century mill is small cosy restaurant, and hotel rooms on two floors. The excellent cuisine incited the guests to "demand" a few rooms to be able to stay here a bit longer, particularly since the mill stands on a small lake and it is possible to loiter here freely. It was Charming interiors, a decor that is exceptionally well adapted to the building’s character. Rustical, yet with a good taste, featuring mill-related accessories, old drawings and charts collected by the owner over the years. Everybody feel a positive spirit, favorable to relaxation and consumption

Masuria is very well known because of its lakes and Forests. Typical masurian cuisine is also worth of taste. However, it's not so easy to do it, because the number of restaurants with proven food and service quality is very limited throughout the region. The Restaurant "The Old Mill" is the place you should visit when you are in Niegocin lake region. The restaurant is only a few miles from Giżycko and offer you good choice of typical masurian dishes. The room is not so cosy, but during summer days you may eat your lunch or dinner on the grass behind the house. View on the lake is another extra. The cook offer you the best of traditional masurian food prepared from fresh fish, forest mashrooms and dumplings. The prices are very reasonable, especially in a proportion to quantity of food. I recommend that place. 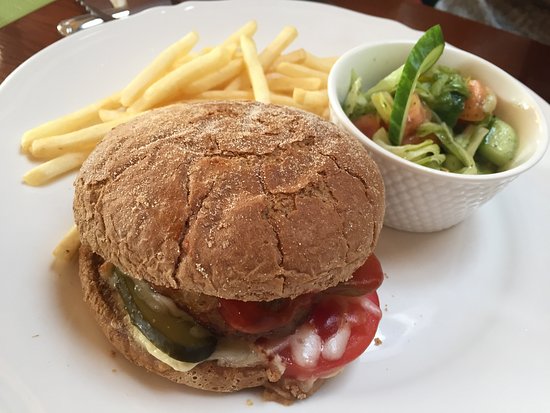 We were sailing with friends on the Masurian lakes and by pure chance docked at the marina of "Hotel Ognisty ptak " in Ogonki . Maybe the first week of September is already off season but there were only few people around. The place looked beautiful and tranquil so we decided to have lunch at the hotel restaurant. We had Masurian style fish soup; potato pancakes with sunflower a pumpkin seeds, Russian dumplings (Pierogi ruskie) and a meringue apple pie with cinnamon ice cream. Everything was delicious!
Add a view of blue lake ,green trees and lawns, light breeze and sunny (but not hot) day and you have a beautiful lazy afternoon ! 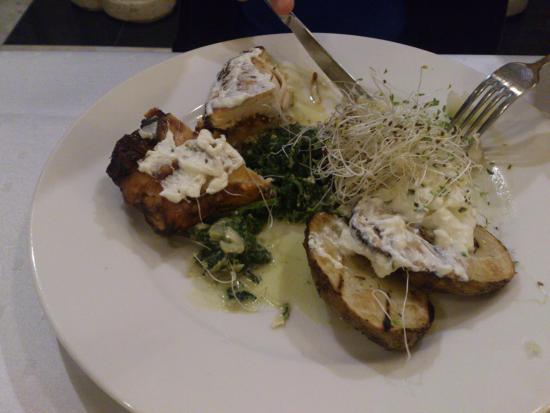 The restaurant is located in the St. Bruno Hotel.The location is beautiful and the restaurant's decor is very nice and eclectic. Menu is short ,so we expected that the dishes will be exceptional as the restaurant was nominated for the 12 best restaurants in Wine &Food Noble Night in 2012 .To our disappointment the dishes were bland and unremarkable , nothing special . The portions were served on the big plates ,but were quite small with the high prices. It was quite disappointing as we expected a great evening out , but it ended with something like a snack instead of dinner. 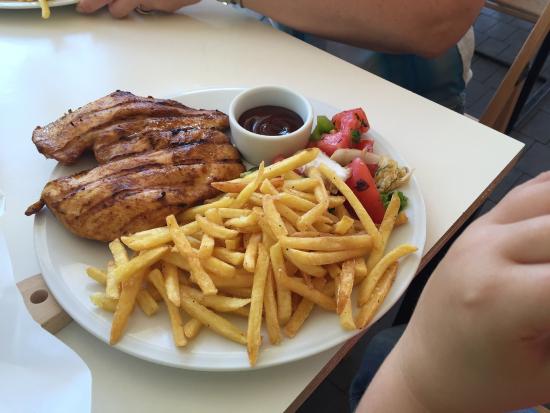 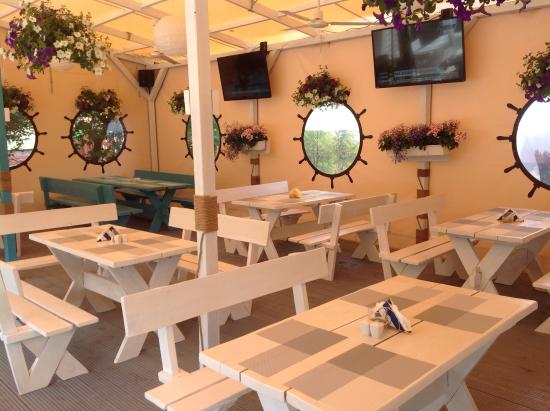 We have read the reviews and also asked our boat captain where can we eat a fresh fish, he had to think long which was surprising to me! Finally he described this place not knowing the name as the names change too often as he said. The place is located in a tent, next to the canal, separated by a one-way street. I liked that it was half open so I could have some air. As to the service, the girl was pretty nice though seemed unhappy, not quite attentive, not offering anything what's the best in the house. We took a look at the menu and decided for sets as the prices were high. This did not surprise us as the fresh fish costs 70-90PLN per kg in the fisherman's doc's. The set costs minium 28PLN, I took dander filet in spinach with potatoes and salad 39PLN, whitefish in the same set for 30PLN, and a fish soup for 15PLN, which had only 3-4pieces of fish in it. Overall the fish was tasty but there was something weird in this place. Eat and go, we were the only gests on Friday and we did not feel invited to spend more time not money. The fish was tasty and fresh but that is all.