Where to eat Cafe food in College Park: The Best Restaurants and Bars

Find out what Cafe restaurants to try in College Park. College Park is a city in Fulton County, Georgia, United States, adjacent to the southern boundary of the city of Atlanta. As of the 2010 census, the population was 13,942. Hartsfield–Jackson Atlanta International Airport is partially located in the city's boundaries (including the domestic terminal, Concourse T, Concourse A, and about two-thirds of Concourse B), and the Georgia International Convention Center, owned and operated by the City of College Park, is within the city limits.
Things to do in College Park

We have a restaurant that offers delicious wraps and smoothies and in the back, we have a coworking space where start-up businesses can develop their ideas into life. We welcome everyone to take advantage of this gem in the College Park community.

I was staying in College Park near the Atlanta airport and wanted an alternative to the overpriced hotel breakfast. I found this little cafe in the business section of College Park and tried it out.The menu was not too expansive, mainly coffees, juice and breakfast sandwiches. The staff was friendly and I ordered a ham, egg, and cheese on a croissant. Adding a juice just cost $.50 more, rather than the $2.50 the restaurants want. The sandwich came out and was excellent! Plenty of ham, hot but not blistering my mouth, and the croissant was buttery and flaky. Ten times better than any breakfast sandwich from a chain restaurant.Now comes the most amazing part of my meal. I realized the next day I had left my hat there. They are closed on Sunday so I could not get in. But when I called them they said they would talk to management about it. I got a call back, and after playing phone tag finally got them my address, and THEY MAILED ME MY HAT! That is customer service above and beyond the call.I highly recommend this restaurant. The staff is friendly, the food is great and reasonably priced, and they are devoted to customer service.

Where to eat Pub food in College Park: The Best Restaurants and Bars 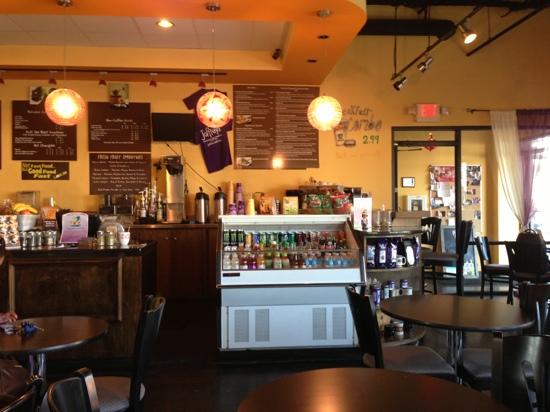 The shuttle bus driver for the Best Western Atlanta East (which this place sits directly next to) recommended we visit Joffreys. It has recently re-opened under new management, apparently. All I can say is - you need to go here. I have never had chicken wings as good as the portion I had there. Deliciously crispy on the outside, melting in the middle, with the sauce of your choosing. My friend and I also shared a hummus platter, with 3 types of hummus to choose from and plenty pitta, fruit and veg to dip.My friend had the lobster bisque, which she said was thicker than she would've expected, but tasted absolutely delicious. I opted for mac 'n' cheese - perhaps seems like a boring option, however it is made with 4 cheeses and is absolutely delicious. A good strong cheese flavour, with a wonderful creamy aftertaste. The portion was more than generous - I had to take half of it away!As for drinks, well, they had margaritas on special for $3 when I was there. And wow, those were good margaritas. Expertly mixed to a standard I could expect in a cocktail bar back home where I'd be paying more like Â£10 per drink.The owner/chef is a lovely lady - a British ex pat who despite being in the States for many years still has a very classy English accent. She and her staff are welcoming and friendly, quite willing to chat, and open to any and all feedback. The food is provided promptly, yet is obviously freshly prepared per order.I really can't recommend this place enough. Sure, there are also the likes of IHOP, Wendy's and McDonalds nearby. But I can guarantee you will get far, FAR superior food for your money in Joffrey's. If I'm ever back in Atlanta, it's where I'll be going for dinner.

5. Cafe At the Corner 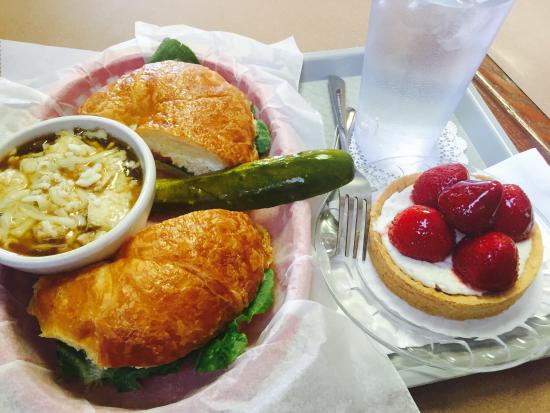 Reviewed By Randy A

Cute little place with wonderful food. It was all very fresh and flavorful, with nice combinations available for sandwiches, salads, etc. The deserts are pretty amazing, very light and tasty. Will come again. Hours are for lunch only, 11 to 2PM. 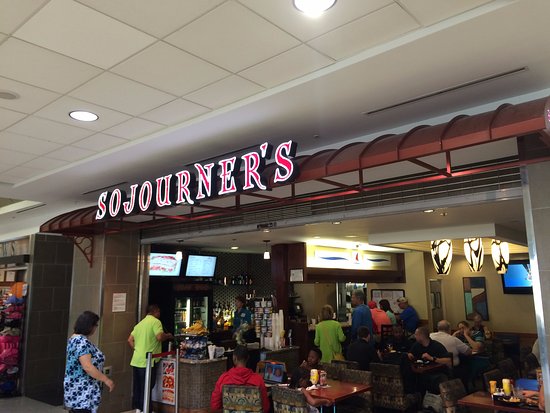 Any place else is probably better including the food court area that you probably just walked past. You should go to One Flew South if it was open. It wasn't for us and we rue the decision to skip the food court. Only plus is that it was cheap. Honestly it was not as bad as the level of cleanliness and service level would have me believe. 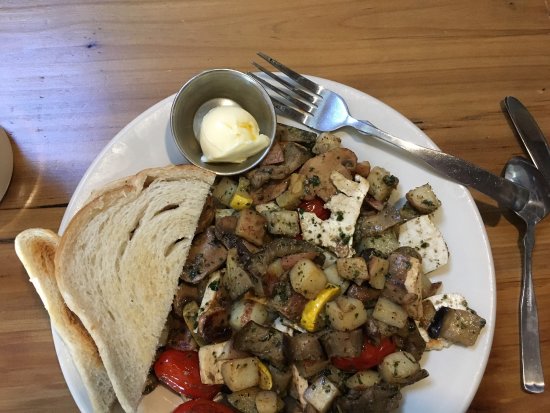 A lot of reviews here have raved about this place which is what took us here in the first place. However, we were a tad disappointed. While, it was nice to have buckwheat pancakes, the so called herb potatoes and the toast were downright inedible. The coffee was not bad. When we entered, there was no one to greet us. We helped ourselves to the menus and found a table. Only after 10 minutes, did some one show up! 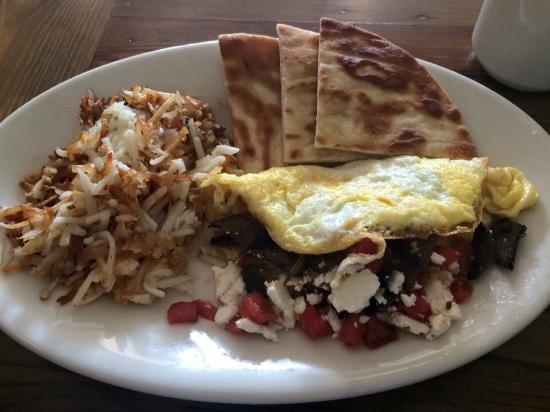 We stopped in for lunch based on the TripAdvisor reviews. It was a good choice.The restaurant has very limited parking, so we had to park a few blocks away on a side street. When we entered, the person at the counter was very friendly and helpful. You have order at the counter and the food is brought out to your table. She told us to take our time and gave us each a menu. We placed our orders, and the food arrived quickly. Our group ordered a Greek salad, a grilled chicken wrap with fries, and a veggie wrap with orzo. All of it was very good! The portions were ample to large. Everything was good tasting and fresh.Everything appeared clean. If we were in the area we would be back. 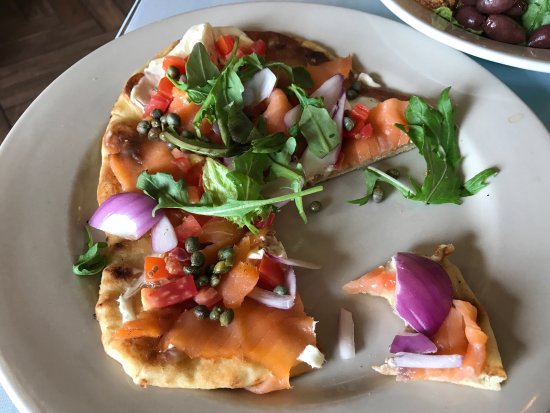 Stopped in on a 4 hour layover at the airport to have dinner. Although the quesadilla was good, hot and stuffed with chicken the stars were definitely in line on the wine - delicious California Sauvignon Blanc - dark chocolate cake with white chocolate frosting and the service was excellent at the table - definitely will stop there again on an airport layover