What to do and see in Viterbo, Italy: The Best Places and Tips

Viterbo [viˈtɛrbo]  listen (help·info) is an ancient city and comune in the Lazio region of central Italy, the capital of the province of Viterbo.
Restaurants in Viterbo 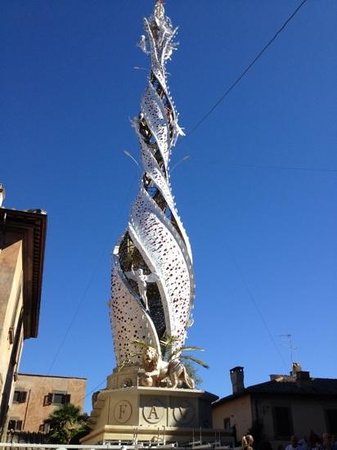 If you are not easily impressed, this should push you over the edge...the buildup begins Thursday evening and culminates with the procession of 100 men carrying the 100 ft tall Machina through the city. It is one of the most impressive sights we have experienced in many years of travel 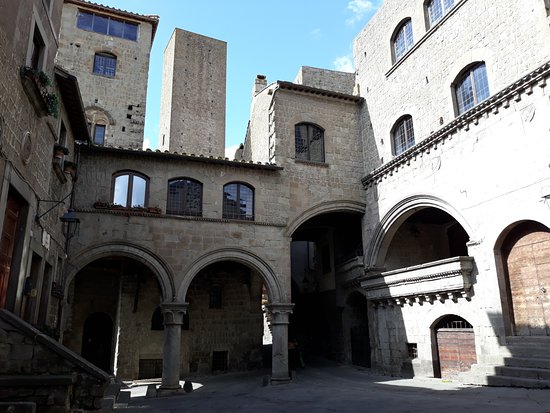 The mediaeval quarter of San Pellegrino is superb, so much beautiful 11th-13th century architecture. The unique buildings with an external staircases called “profferli” go from the ground floor to the first floor. Some buildings are linked together via a covered bridge, which forms a passage to the second or first floors, this in turn creates an arch at street level with a sheltered area. Some houses don’t front onto the street and have a shared internal courtyard called a "richiastro". The standout building in the mediaeval quarter is Palazzo degli Alessandri built 13th century, it consists of three floors, numerous arches and dominates Piazza San Pellegrino. Chiesa di San Pellegrino was first mentioned in 1045, however there is very little left of its original appearance due to modifications made in the 19th century. The church was bombed in 1944 and reopened in 1951.
The buildings are beautifully preserved and when walking through this section, it is easy to imagine carts, animals, markets and people in mediaeval times going about their business. Just leave yourself time to wander and soak it all in, it wouldn’t hurt to make sure there is plenty of room on that memory card either. 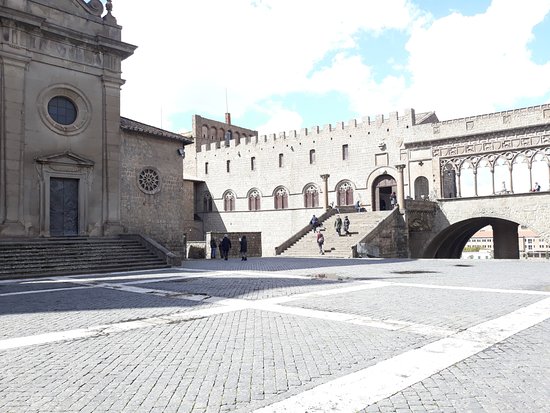 The Popes' Palace is the most important monument of the city of Viterbo and it has become a symbol . It was built to mark the transfer of the headquarters of the Papal Curia in 1257 by Pope Alexander IV . Raniero Gatti strongly wanted this building and also built a large audience hall, now known as the "Hall of the Conclave" for the fact of having hosted the first and longest conclave history. Another characteristic part of the Palace of the Popes is the Loggia of the blessings (better known as the Loggia of the Popes) built in 1267: it overlooked the Pope coming from the Hall of the Conclave. Recently it reopened the sumptuous hallGualterio. The Palace is included in the tour circuit of the monumental Polo Colle del Duomo: free of charge with the purchase of the ticket is the audioguide in five languages (Italian, English, French, German and Spanish) that will accompany you in the discovery of all the areas you can visit.

The palazzo dei papi has an interesting history, so we definitely wanted to visit it. The only way to visit is by having a guided tour, in combination with the Cathedral (9€ pp). The tour is good, but is only offered in Italian, which is kind of a challenge despite that having some basic knowledge of Italian. They also offer a written document in English with the explanation that the guide gives, but that is of course not the same experience. Anyway, the tour is really interesting, giving access to two rooms in the palazzo (one of them the room where the conclaves were held), and two interesting hidden rooms in the Cathedral (really surprising). The ticket also gives access tot the museum, but that is really not worth the visit.

The historic centre of Viterbo is simply stunning. We arrived at Viterbo Porta Romana by train and our walk to our 12th century tower accommodation in the walled city, began with the entrance of the ornate Porta Romana, what a great introduction. The centre is filled with many beautiful buildings and then there is the history and stories/legends, two stories in a nutshell are - The beautiful Bella Galiana shot with an arrow by her shunned admirer. The French cardinals servants who washed a dog in Fontana Pianoscarano, a woman protested it was for drinking, a riot broke out, she was killed, the popes punishment was swift, ten rebels hung, fifty imprisoned and the homes of the leaders destroyed. Walking through these cobbled streets, it is not hard to imagine these events taking place. The historic centre is filled with lovely Fountains, mediaeval buildings, coats of arms on structures, towers, arches, piazzas and the best part…..it is not filled with tourists. Your camera will get a good workout.
The historic centre is contained within roughly four kilometres of walls built 11-13th century, with 13 gates. Below are the personal top three places in the historic area.
The mediaeval quarter of San Pellegrino is amazing, like being transported back in time with wonderful architecture, buildings with “profferli” an external staircase, these connect the ground floor with the first floor. Piazza San Pellegrino has the beautiful Palazzo degli Alessandri. Structures are well maintained and despite the greyness of buildings, they are dressed up with colourful flowers in pots and placed on steps.
Palazzo dei Priori built 13th-18th centuries, has the most beautiful courtyard with Fountain and benches. Sunset is wonderful here.
Piazza San Lorenzo has some stunning buildings - The Gothic Palazzo Papale and the adjoining Loggia of which very little remains, is beautiful. Palazzo Valentino della Pagnotta built 13th century, while not large has the most striking façade. The 13th century bell tower with stripes is eye catching and of course there are Fountains.
While these were the stand outs, the whole historical area is superb, when considering what this city has been through. These buildings have survived rebellions, family power struggles, WWII bombings and the ravages of time. It is a credit to the people of Viterbo, for maintaining and rebuilding so many of these structures, which enables us as tourists, to enjoy one of the best preserved mediaeval towns in Italy. We were here two nights and it wasn’t enough, would love to come back. 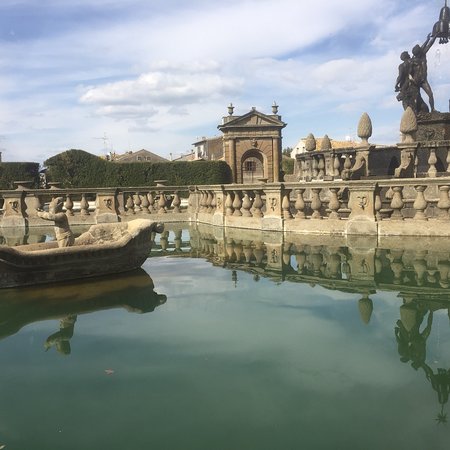 At Euro 5 for entry this is a garden worth visiting. The parterre is well kept and trim, most of the Fountains are working and the water cascade is quite impressive. There is some nice parkland as part of the Gardens too. As an example of its type, this garden can be seen in about 1.5 hours maximum, whilst visiting Viterbo. 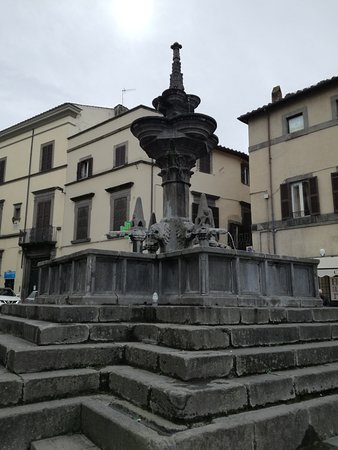 There is no doubt Viterbo has earned the title, “City of Beautiful Fountains”. They are usually described as being spindle or fuso Fountains and most of them feature lions, the symbol of Viterbo. It is a joy walking through the historic centre of Viterbo and seeing so many Fountains and hearing the trickle of water. Fountains are located in Gardens, courtyards and piazzas, below is a small sample of these wonderful water features.
Fontana di Palzzo dei Priori built 1626. The large basin has the coat of arms of Genovese Girolamo Grimaldi, four large dolphins hold up the middle basin. Above is a third basin, with the 19th century created top piece, consisting of two lions holding a palm tree, it commemorates the coat of arms of Viterbo. It isn’t as big, ornate or as old as some of the other Fountains, however this is the personal favourite, location has a bit to do with being elevated to number one. Situated in a beautiful courtyard with Valle Faul as a back drop, visit at sunset, when everything is bathed in a golden glow, it is spectacular. Located in the courtyard of Palzzo dei Priori, with entrance off Piazza del Plebiscito.
Fontana Grande built 1212, is the oldest of the Fountains. Greek cross for the basin, it has numerous lion heads spouting water. A replica of the Fountain built in 1911 can be found in Rhodes, Greece. Located in Piazza Fontana Grande.
Fontana del Gesu was first mentioned in documents of 1450. Six short columns with capitals hold up a large basin with lions spouting water, above protruding from the column are the heads of lions, horse, ox and sheep their mouths used as spouts, a bowl sits overhead. It was completely rebuilt in 1923, using the lower basin from the demolished San Domenico Convent cloister. Located in Piazza del Gesu.
Fontana della Morte previously called Fontana di San Tommaso, named after Chiesa San Tommaso, the name of the Fountain changed in the 16th century, when the Confraternita dell'Orazione e della Morte located here. The Fountain was built 1206 and destroyed in the 1243 Siege of Viterbo and rebuilt mid 1200’s. It has a circular basin, column with lion heads as spouts, above are ancanthus leaves, topped off with a pine cone shape, surrounded by leaves. Located in Piazza della Morte.
Fontana della Loggia del Palazzo Papale built 15th century, it replaced the 13th century Fountain, Fons Papalis which was damaged when the roof collapsed. The bottom basin has the coat of arms of Sixtus IV della Rovere, Cardinal Raffaele Riario, Bishop Francesco Maria Settalla and the Gatti family. The ornate upper basin with 12 lion heads spouting water, is from the original 13th century Fountain. Located in Piazza San Lorenzo, in the Loggia of the Popes Palace.
Fontana di Carluccio built 13th century, is a very simple Fountain with tub and a cube backed onto the wall of a building. The cube has the detail of a lions head from which there is a spout, with the coat of arms belonging to the Gatti and Anguillara families featured on the sides. Located in Piazza San Carluccio. 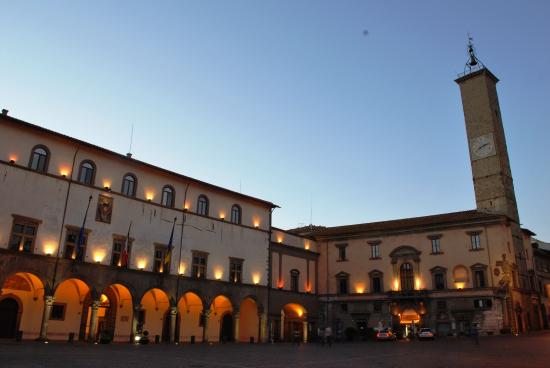 Nice place to walk to for an amazing view of Viterbo and some great architecture. You can see the Cathedrale di San Lorenzo, and also look down to the awakening sculpture below. Definitely a beautiful historical spot to see. 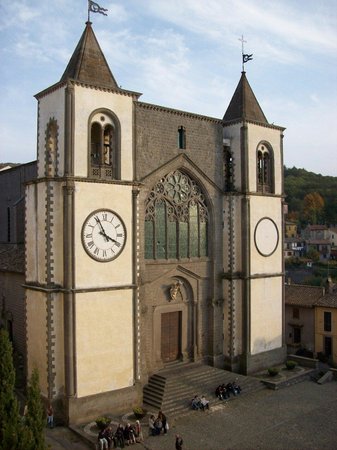 This Medieval Cathedral reminds you of the Puy-du-Dome Cathedral in France. Essential, no thrills but with a great atmosphere. 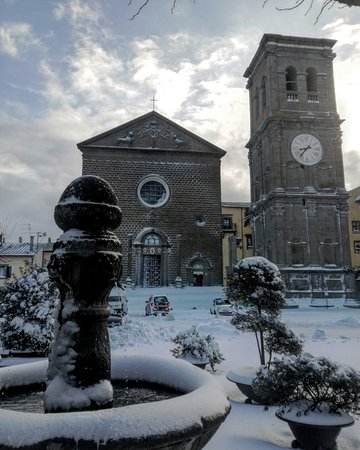 We spent about an hour here when we were in Vertibo. We saw Santa Maria's remains. We sat down for a few minutes of silent reflection and prayer. Just as we were sitting there, the sun shone brightly through the stained glass windows and it was like the rays of light from a painting. Very moving.

This museum is below the Borghese Gardens, a bit hard to find, but worth the time. The collection of Etruscan artifacts is well presented with thorough signage, and the displayed pieces are stunning. Plan to spend at least an hour viewing all of the exhibits.