With half a million people, Nuremberg is Bavaria's second largest city. While its history dates to the 11th century, Nuremberg is most often linked to the 20th century (specifically World War II). It first served as the site of many pre-war Nazi rallies, then was nearly leveled by Allied bombing, then was the site of the famous post-war Nuremberg Trials. The city has much to offer today's visitors, including the rebuilt Nuremberg Castle and the world-famous gingerbread at Hauptmarkt. Hansel and Gretel would have loved this place.
Restaurants in Nuremberg 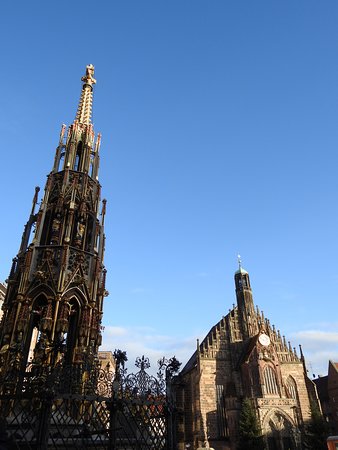 NUEREMBERG city centre is really elegant and worth to visit. I really enjoyed and loved the red buildings. Next time I will give more than a day to visit it. 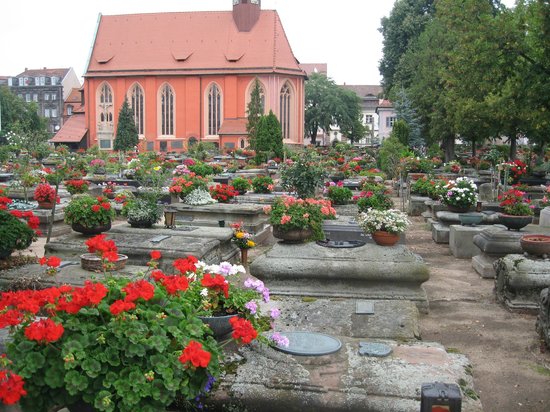 Perhaps we are quirky but we have visited quite a few Cemeteries on our travels. When our Nuremberg tour guide recommended the Johannisfriedhof and we saw it had been rated Germany's most beautiful cemetery we had to go and look.
The walk from the old town is not far - you can walk along the river a short way after going under the old town wall and then up a set of steps towards the destination (best check your tourist map or Google maps). That is nice and of itself.
The cemetery was somewhat disappointing actually. There is no grass at all, which is odd and makes it seem less-than-beautiful, but in May at least almost all the tombs (which are all above ground - see the website or photos) had blooming pansies on them. The time of year to come however is when the roses are out (summer?) so May was simply too early.
Having said that, we found even the Alter Friedhof in our home town in Darmstadt is more beautiful and characterful.
In short don't come here expecting a Pere Lechaise (Paris) or Glasnevin (Dublin). But still worth the walk out and back.
If you found my review helpful, I would appreciate your vote. The courtroom is still a functioning courtroom today and as such I was overcome with a feeling that is hard to explain. Sadness, yet joy that those who committed these atrocities were finally served justice. Listening to the guides gave extra emotional turmoil to myself as I imagined how many people are still around without ever been tried for their crimes. 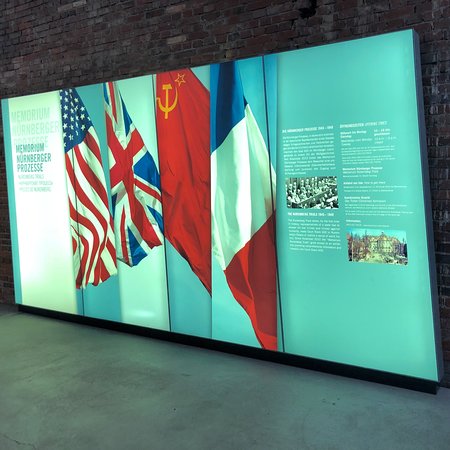 It's so interesting the exhibition is very well laid out and the audio guide makes it all very accessible. It covers and essential piece of history that everyone should know about 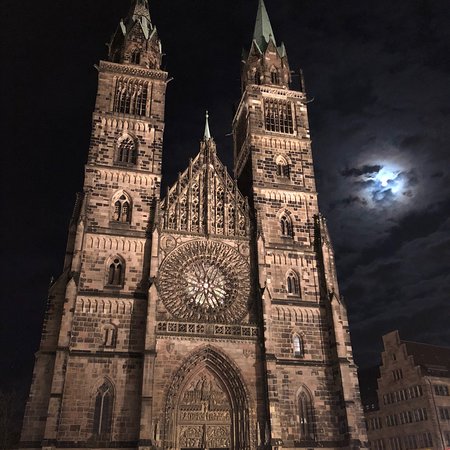 Impressive monument to the destruction of the city, nice surroundings in which to take a walk to njoy old town. 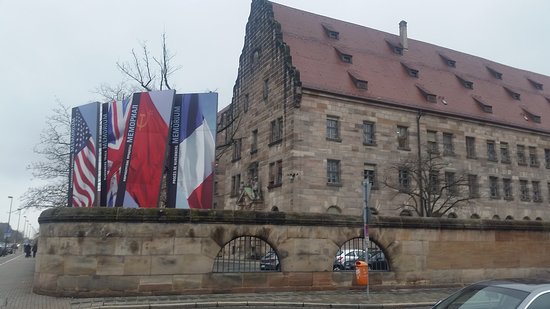 We were fortunate to have a stellar guide for this tour, and he enriched our experience tremendously. Either way, the tour includes the Memorium Nuremberg Trials exhibit, which is very educational, and provides another perspective of events taking place during and after WWll. It's a great reminder of the atrocities performed at the hands of the Nazis, and caused me pause to consider it wasn't very long ago in the scheme of things. 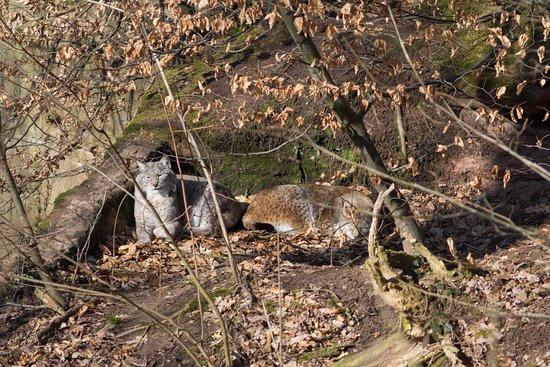 Tiergarten Nuremberg is set in an extraordinary and unique landscape. By taking a walk through the large, densely wooded park the visitors discover open-air enclosures skilfully fitted into the red sandstone of the region. Watch dolphins and sea lions swim and play in the open air at the Dolphin Lagoon. Explore life at the Amazon, complete with rainfall periods, at the Manatee House. Go to the Blue Saloon with its vast Panorama windows and experience the fascinating underwater world of both manatees and dolphins. Children will love the Kinderzoo, where they can pet animals and discover a lot more...

We visited to the Nuremberg Zoo. We used tram no 5 from Hauptbahnhof main to the Tiergarten stop. This was the last stop on the journey, where it would turn around ready for the return journey. We used our Nuremberg Passes, the cost of the pass was 25€ which included all forms of transport and entry to all museums & attractions for 2 days, within the entire region of Nuremberg. We found the pass good value if you visit here, adult ticket would have been 13.5€ alone.
We visited on a rainy day during the Nuremberg Christmas market period. The advantage was there no queues of people; disadvantages were that some animal enclosures were closed during this time. We saw a lot of wide-ranging animals which we really enjoyed. It was sad to see at times such awesome creatures locked up, but they appeared to be in good condition and well catered for. The park is big, be prepared for hilly climbs (suitable shoes are recommended).
It was nice to break up our Nuremberg visit with a trip to the Zoo. You could easily spend 3- 4 hours here. 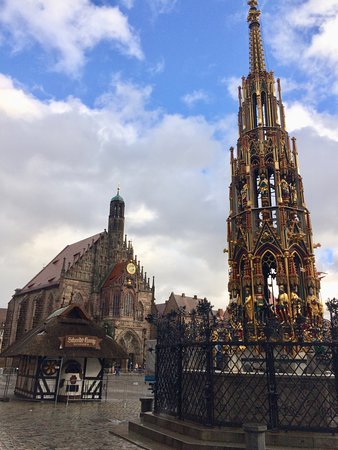 Nuremberg's Christmas Market starts at the end of November and continues through December. It's a traditional festive German market with yuletide treats like gluhwein, gingerbread and Nuremberg's famous bratwurst sausages. The opening ceremony is presented by the glamourous Christkind, who recites her now famous Christmas speech to thousands in the Main Market Square. You could also take a city tour in the old fashioned stage coaches and enjoy the nostalgic Christmas tunes the coachman plays on his trumpet. Finally take a walk up the steps of the Church of Our Lady for a spectacular view of the market's red and white coloured stalls and decorative lights. The children's market section is ideal for families.

We were really anxious to visit Christmas Market and after that we think that it really worth it. Market is almost all around historical centre. There are several food options to choose, such as typical sausages, pork sandwiches, beer, typical hot wine. Strongly recommended to visit Nuremberg on Christmas days 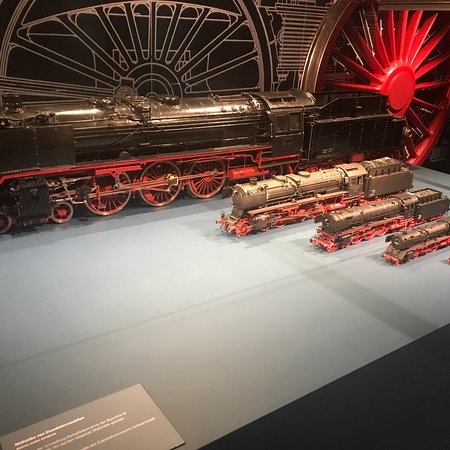 Having opened its doors in 1882, the DB Museum is now the world's oldest museum devoted to the Railways. Its main building is located in Nuremberg, and it also has two other branches - one in Koblenz and the other in Halle an der Saale. Property of the Deutsche Bahn Foundation, the Nuremberg building may be old, but it is nothing if not modern, as its collections and Exhibitions have been completely overhauled in recent years. The heart of the Nuremberg exhibition is a panoramic sweep of rail history in Germany from its humble beginnings around 1800 up to the present day, and even taking a look at what the future may have in store. Covering a total space of 6,800 m², it takes a different approach to most railway museums in that the history of train technology is just one aspect among many others. All of them are woven together to tell a much larger story. Scores of objects, from original locomotives to old advertising signs, are given their own interactive settings and vividly bring this tale to life. The original vehicles at the museum are another major draw for visitors. Some 40 rail legends are on show in two halls. They include the oldest surviving passenger coach in Germany, a replica of the country's first steam locomotive, the Adler, and a model of the ICE 4, the next generation of high-speed train. The museum's external exhibition space covers some 15,000 m² and includes a vintage train platform, interactive signal box and a display depot containing train-related treasures from the museum's various collections. Younger visitors can look forward to KIBALA, a railway paradise created specially for children to experiment and play with. It's got lots of buttons that need pressing, a train simulator and a miniature railway that shunts our little visitors around the entire exhibition grounds. The museum hosts different special Exhibitions dedicated to specific topics, and its programme of events also includes a wide range of Concerts, talks and celebrations that ensure there's never a dull moment at Lessingstrasse 6.

The DB Museum is located just a few minutes' walk from the main railway station in central Nuremberg. Entry costs EUR€6.00, plus EUR€1.00 for the multilingual audio guide (remember to take some form of identification, such as a drivers' license, as security for the audio guide).
Over the course of 2-3 hours, you can absorb the history of the German Railways from the 1800s onwards and find out how and why Nuremberg became such a key location for rail transport in the country.
The exhibits - which include photography, uniforms, video and beautifully engineered models - are thoughtfully presented and very accessible. Be sure to spend time in the vehicle halls: the royal carriages of Ludwig II of Bavaria and the museum's selection of original and replica locomotives are stunning!
From February 2016, the exhibits which cover recent developments in the German Railways (from 1945 - 1989) are closed for refurbishment but the museum is still well worth a visit. 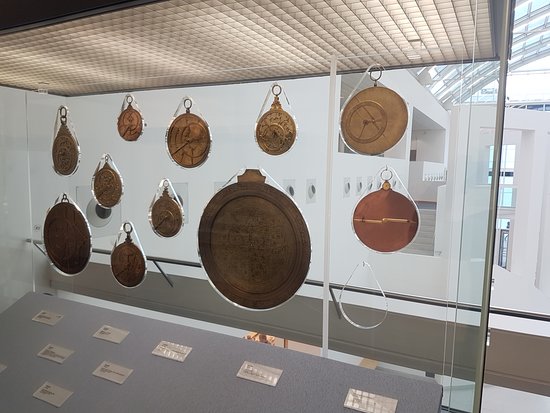 We enjoyed our visit to the museum. The layout is good and the artwork is impressive. There was a Behren exhibit there which we were disappointed in. It was not very extensive. We were also disappointed that we couldn't eat in the restroom because it was totally reserved for the day by a group. Nonetheless, we recommend the museum.