What to do and see in Milledgeville, United States: The Best Places and Tips

Milledgeville is a city in and the county seat of Baldwin County in the U.S. state of Georgia. It is northeast of Macon and bordered on the east by the Oconee River. The rapid current of the river here made this an attractive location to build a city. It was the capital of Georgia from 1804 to 1868, notably during the American Civil War. Milledgeville was preceded as the capital city by Louisville and was succeeded by Atlanta, the current capital. Today U.S. Highway 441 connects Milledgeville to Madison, Athens, and Dublin.
Restaurants in Milledgeville 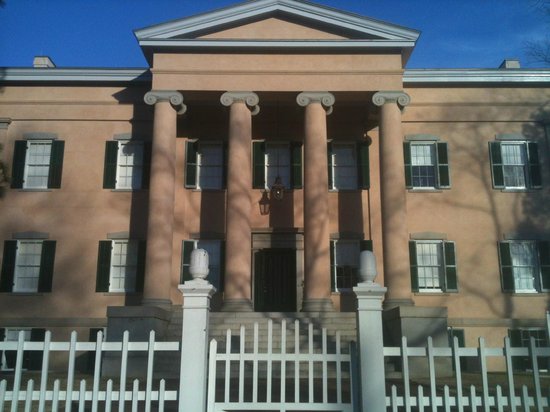 Completed in 1839, Georgia's Old Governor's Mansion is one of the finest examples of High Greek Revival architecture in the nation. Designed by noted architect Charles Clusky, an Irish immigrant and built by Timothy Porter of Farmington, Connecticut, the Mansion looms over Milledgeville with its stately columns and imposing facade. Serving as the residence for Georgia's chief executives for over thirty years, the Mansion's history encompasses the antebellum, Civil War, and early Reconstruction phases of the state's history. Such noted state leaders as George Crawford, Howell Cobb and Joseph E. Brown resided in the building and used it as a stage for speeches and also to introduce guests of national standing. Georgia's Old Governor’s Mansion also served as a stage on which many elements of the complex social issues of the antebellum period were played out. Slavery and the complexity of society and gender roles are among the issues that shape the history of the building and are explored in tandem with the issues of politics. During the Civil War, the Mansion was claimed as a "prize" in the "March to the Sea," when General William T. Sherman headquartered in the building on November 23, 1864. Following the war, Georgia's seat of government was relocated to Atlanta, and the Mansion was abandoned. Given over to Georgia Normal & Industrial College (currently known as Georgia College) in 1889, the Mansion served as the founding building of the institution and is the campus's most treasured structure. Beginning in the late 1990s, an initiative was begun to return the Mansion to its antebellum splendor. Following five years of intensive historical, structural and material research, Georgia's Old Governor's Mansion began its long awaited historic restoration in November of 2001. Funded through the Georgia General Assembly and a generous grant from the Woodruff Foundation, over three years of painstaking work has restored the original layout, coloration, lighting and appearance of the building. Georgia's Old Governor's Mansion now serves as an historic house museum whose mission is to care for, collect, interpret and exhibit items (including artifacts, structures, and gardens) that illustrate the history of the site and its inhabitants during the years the Mansion was the official residence of Georgia’s governors (1839-1868). Tours focus on the history of the building, its occupants both free and enslaved, and the myriad complexities of Antebellum society in Georgia and its history. Georgia's Old Governor’s Mansion was designated a National Historic Landmark in 1973 and is an accredited museum of the American Alliance of Museums. In 2015, the Mansion was named an affiliate of the Smithsonian Institution.

We toured this home after taking the trolley tour of Milledgeville and thoroughly enjoyed it. Our guide, Grace, did a wonderful job of explaining the various rooms and their furnishings. There is an introductory film to view before the tour, but we found that the music in it overpowered the narration. If you take the trolley tour, you get a $3 discount off the price ($10) of the mansion tour. There is also a small gift shop and restrooms. This home tour is a real bargain compared to the cost of the mansions in Charleston, S.C. 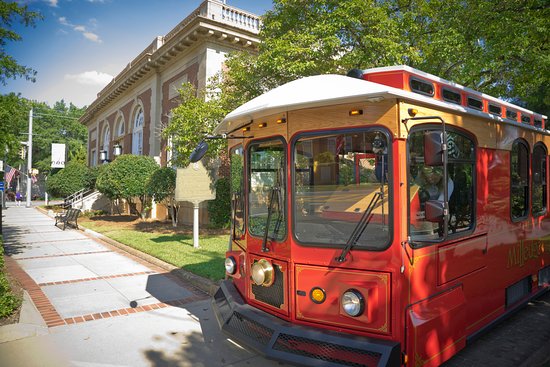 Begin your Milledgeville exploration at the Visitor Information Center. Here you will fall in love with the First Lady of Georgia, find local maps, receive gracious hospitality, learn of upcoming events and absorb the tips of local delicacies. Visitor favorite, the Historic Trolley Tour, departs from the Center.

Located in a historic building in the downtown area. Friendly staff with lots of information about the area. Highly recommend the trolley tour. Very informative of a town steeped in history.Thank you for the wonderful review! We are glad to hear you found us hospitable and the trolley tour informative (a little fun too we hope!). Come see us again! 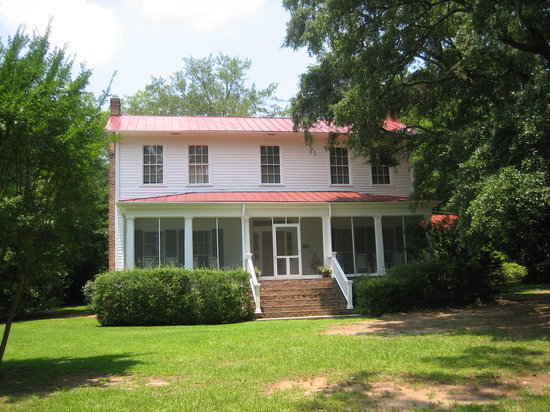 Historic farm in Milledgeville, GA where Southern fiction writer Flannery O'Connor lived and worked until her death in 1964.

Middle Georgia is the home of several notable writers including Alice Walker and Joel Chandler Harris. But, it's the home of Flannery O'Connor that epitomizes the charm of 20th century Georgia. A private museum, Andalusia sits on several hundred acres with walking paths along creek beds and ponds that offer a splendid view of the home. And it still feels like a home. It is a simple place for a writer and her frequent guests and not intended to be anything pretentious. Most of the furnishings are original to the house and with the exception of a couple of pieces, everything from O'Connor's life remain. It's not necessarily a long tour, but the amicable staff invite their guests to linger. Well worth the visit if you're in Middle Georgia. 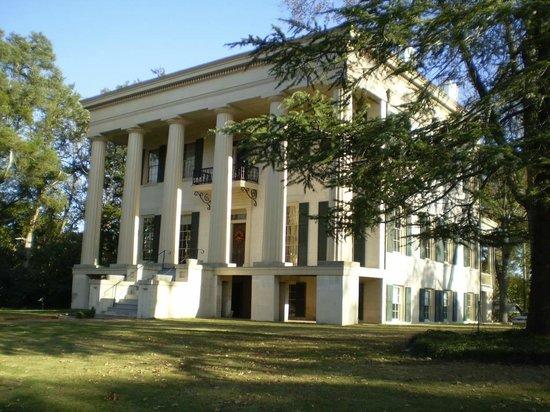 This is an EXCELLENT spot for getting out and stretching your legs. The lawn and property is well-maintained and has plenty of walking trails. You can also stroll through the two greenhouses near the front of the property (near the parking area). If you are a fan of architecture like me I highly recommend paying the very small admission fee to walk the main house. It is well maintained, and the volunteers that run the main house and gardens and very friendly. 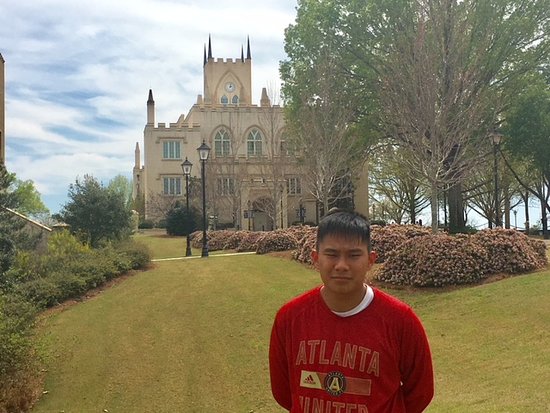 Georgia's Old Capital Museum is located on the ground floor of the Old Statehouse in Milledgeville Georgia. Galleries cover Pre-historic Georgia through Reconstruction. A must-see for everyone!

The old capitol building is located in the original building at what is now a military school. Free parking is available in front near the church next door. I like to visit former state capitols and was surprised with how much of Georgia's history was presented here. I also learned that Oliver Hardy of Laurel and Hardy fame grew up in this town before leaving to become a movie star. Upstairs you can still visit the old senate chambers but it is used for events now and only a few paintings are on the walls to represent its bygone days of political history. There is an elevator to the upstairs area if needed and the walk from the parking area to the old capitol building is a good stroll if walking is an issue. A few plaques are out front detailing some of its history. I was impressed with this place being only one of two Gothic styled capitol buildings that were ever built (the other is in Baton Rouge). 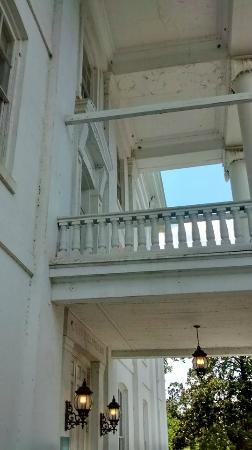 Established in 1842 as the Georgia Lunatic Asylum, this facility treated patients suffering from mental illness, epilepsy and tuberculosis. Today, the fully accredited hospital occupies approximately 100 buildings on 1700 acres. Museum by appointment only.

There are many buildings in this abandoned hospital and prison area. They are all fascinating to look at. There are security driving around everywhere and signs that unfortunately state no trespassing. I would have loved to get a better look inside these buildings. You can get inside the main building but only in the lobby. I thought it was still very interesting. I love photographing old abandoned buildings so this was like Christmas for me. If you are not into it, I'm not sure how much you would like it. If you like this sort of thing I highly recommend it. 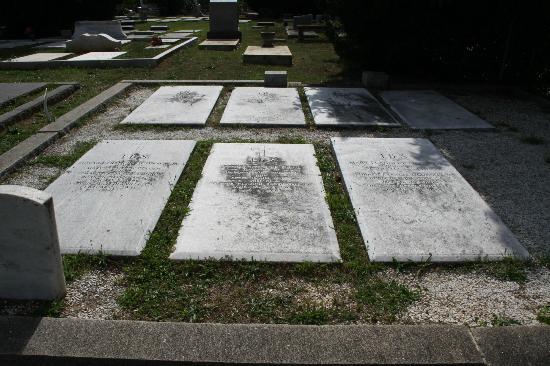 The site of Flannery O'Connor's grave.

We love to explore old cemeteries. This one had brochures for self guided tours. The weather was beautiful and we enjoyed just walking around, wondering about the people buried there. The highlight was finding Flannery O'Connor's grave. 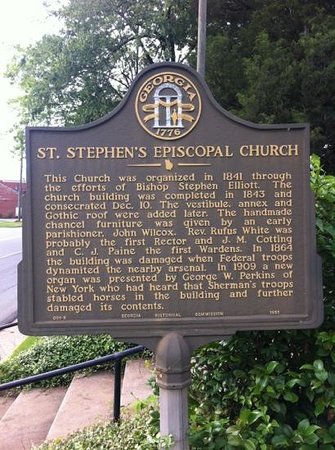 The coast aside, the Episcopal Church did not have a presence in Georgia until well into the 19th Century. This church therefore stands as one of the oldest (around the time the city was the state capital) in the state, established in 1841. Interestingly, the church was built in the Gothic Revival style that was gaining momentum at the time in Europe, though you don't see much of it here (though granted Georgia had some disruptive moments during the period, fair to say). Maybe I'm showing my preferences here, but there's probably nothing more I love than a Gothic Revival church with stained glass windows (well, other than an actual Gothic church, I suppose) and this does not disappoint.

The church suffered damage during the Civil War, when Sherman's men dynamited an area nearby and blew off the roof. Further, they poured molasses down the organ pipes to mute its potential warning effects. But as with the Phoenix, so with the church - the remodeling done in 1873 gives a beautiful beamed roof, and the 1909 pipe organ has a brilliant reedy tone, as evidenced during a recent Eucharist. A church member told me that the stained glass by the altar was a gift from Savannah's Christ Church - as the Confederacy was expecting an attack on the coast, that area was fortified more securely than poor St. Stephen's, so a gift was given to rebuild.

The church is a jewel box, but it is still a house of worship. We attended the Celtic Eucharist on Saturday afternoon (a music-free service consisting mostly of a recitation of an old poetic prayer with a homily) and then attended the Rite II Eucharist the next morning to hear the organ. The church appears to be on the more progressive side of the Episcopal church split, and the rector's words were philosophical but presented with a country charm. 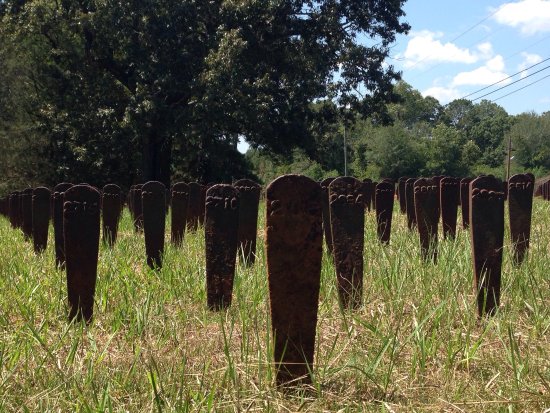 A friend of mine took me to visit this big, little cemetery after a disappointing hike on a local bike trail.

Cedar Lane Cemetery is part of the Central State Hospital campus and has a very interesting history. The iron grave markers were quite a sight and there are many still in place throughout the cemetery.

Most of the stone grave markers have either fallen over or been removed, but a few still remain. If you enjoy being outdoors, this old abandoned cemetery will afford you the opportunity to stroll over slight rolling hills as you explore the surrounding grounds.

Be sure to read the plaque erected at the entrance. Learning just a bit of the history will make your trip a bit more meaningful. When you are finished, you can take the road into the rear entrance of Central State Hospital.

Great lake front setting - lots of docks - lots of campers - decent rest rooms with showers - boating, swimming, fishing, jet skiing. We liked it for an overnight but it is not our cup of tea for longer stay - too, crowded and the staff was not very friendly. Speed bumps made out of dirt are rough and the sites are not very level. This place has been around for a long time and benefits from the water front location - not much effort put into making it attractive - it did the job and did not cause us to turn around at the gate and keep moving on down the road.