Top Things to do in Ieper (Ypres)

What to do and see in Ieper (Ypres), Belgium: The Best Places and Tips

An ancient city in the Flemish province of West Flanders, Ieper (as it’s known in the Flemish tongue) has enjoyed financial and cultural status since the 12th century. Today, visitors can check out remnants of its impressive past, including ramparts that date back to 1385 and an historic moat, which now is a haven for wildlife. Ieper found itself in the middle of World War I and suffered tremendous damage to all of its buildings, but has been both reconstructed in its medieval style and built up with modern structures.
Restaurants in Ieper (Ypres) 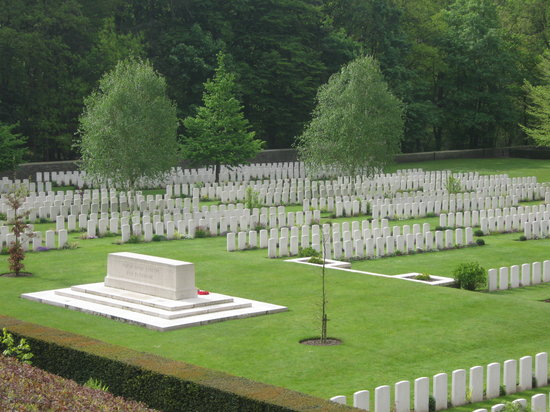 On meeting Jacques we instantly knew we were in for a great tour..,he made us feel at ease instantly...His depth of knowledge on the area and how passionate he is blew us away...we visited so many sites..we booked the The Grand Tour which included The North Salient visiting Tyne cot cemetary and lots of other interesting sites..and the The extended tour which was the south salient..we learned so much from him over the both days..we really could imagine how bad the conditions were for those poor soldiers and the local people ...Jacques described everything to us in such great detail and with such great respect ..we feel so honoured to have been on these tours with him..if we are in the area again we wouldn’t hesitate to contact Jacques and Genevra to guide us round ...I have to add too Genevra kept me updated all the time with any questions I had before the trip and the booking process was very straightforward.
.Thank you both for making our stay in Ypres so memorable...something we will never forget . 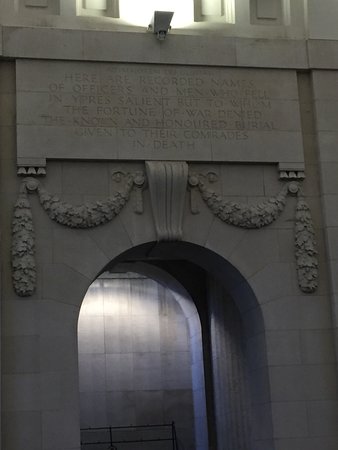 Ypres (now Ieper) is a town in the Province of West Flanders. The Memorial is situated at the eastern side of the town on the road to Menin (Menen) and Courtrai (Kortrijk). The YPRES (MENIN GATE) MEMORIAL now bears the names of more than 54,000 officers and men whose graves are not known. The memorial, designed by Sir Reginald Blomfield with sculpture by Sir William Reid-Dick, was unveiled by Lord Plumer on 24 July 1927. Each night at 8 pm the traffic is stopped at the Menin Gate while members of the local Fire Brigade sound the Last Post in the roadway under the Memorial's arches.

The Menin Gate is unique. It's moving. It's mind-wrenching. I couldn't believe so many men from so many different nations had died here... Take your time to read some of the names. Don't forget this gate is actually the gate of a pre-existing wall that used to protect the city, and that this massive wall is now a park where you can relax your mind after the visit of such a saddening monument. Have a walk in that park (on the right-hand side of the gate when you come from the Market Square)! 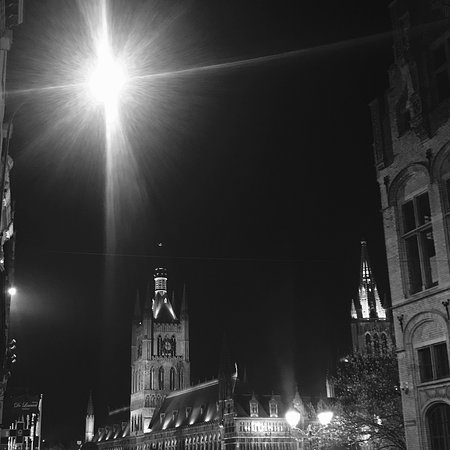 This is a sombre and emotional event which takes place every night of the year in Ypres. Paying of respect to all those who sacrificed their lives in World War 1. The Menin Gate in particular remembers those who lost their lives but whose remains were never found. The scale and sheer number of such men is unbelievable and is really brought home to anyone standing under the Menin Gate. Members of the Last Post Society and local Fire Brigade volunteers sound the last post on bugles every night of the year. Wreaths were laid by representatives of various organisations- several from visiting school parties. For 10 minutes you could have heard a pin drop! This is something I will never forget.

4. Lest We Forget Battlefield Tours (Flanders) 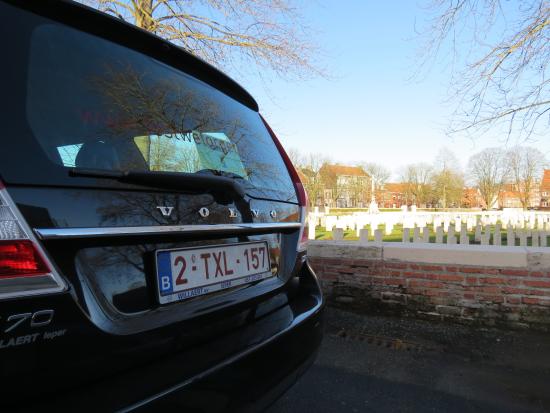 We took a very special short tour of the 1915 Ypres battlefield with Chris, having booked via Milena. The tour was special for our family as we wanted to understand the last days of my mothers Uncle whos name appears on the Menin gate, having...MoreThank you & humbled by your wonderful tribute. Delighted that we were able to rise to the occasion!! 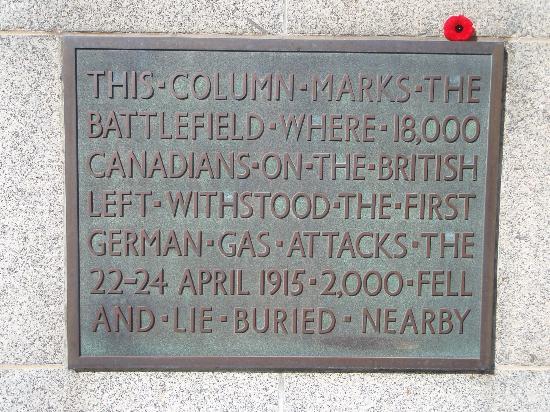 The land literally came from Canada to honour, with the stunning obelisk of the mourning soldier, the brave Canadians who filled the gap and held the line after a vicious mustard gas attack by the Germans who decimated the allied troops.

The Ypres region was the backdrop to on of the bloodiest battles in history, 100 years ago. Now the last witness have died too, the In Flanders Fields Museum is more than ever the gateway to the First World War in Flanders. The In Flanders Fields Museum confronts the visitor with the consequences of the Great War. Old and young are faced with life and death in the Ypres front region. The exhibition with touching video projects, unique sound fragments and the most up-to-date multimedia applications immerse you in the life at the front. each visitor also receives a poppy bracelet that enables him/her to discover four personal stories of 'Joe Public' in the Great War. By logging in you can meet your peers in the war, a century ago.

In Flanders Fields Museum is one of the most instructive museums in Europe. It is located on the Main Square of Ypres. It relates the horrible story of World War I, the trench war. Thousands and thousands of men fell here, Germans, Americans, Belgians, French, British,... Fertilizing the ground for a whole century!
I went there the first time with my English teacher. And I can tell you I didn't leave the way I had entered less than one hour before! The visit of this museum should be compulsory for all Belgian and Northern French schools! If you come to Belgium and care about world history, you shouldn't miss it either. It is one of the most eye-opening museums you will ever visit! 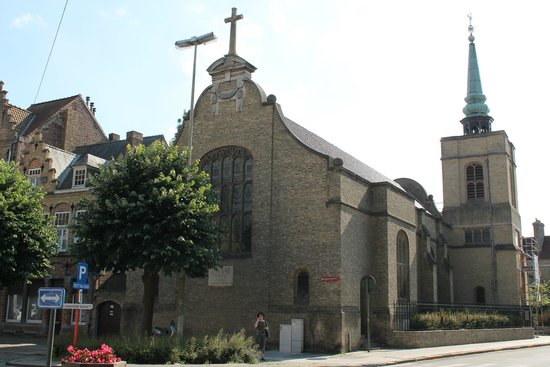 Tucked away almost and across the road from the Cathedral is this unique church built to honour the British and Commonwealth fallen of both world wars but principally the First World War. Built in 1927 it remains a superb place of remembrance and somewhere where families and individuals connected to 'the fallen' in Flanders Fields can find a moment of quiet, calm and reflection. There is a small resident congregation who live in Ypres and surrounding area of Belgium and Lille (Northern France). All are welcome to our regular Sunday services held in the Anglican tradition and you will be sure of a warm welcome.

Saint George's Memorial Church is a place I like to visit when I come to Ypres, One can enter the church and sit quietly, alone with one's thoughts, maybe shed a tear, as I do.Thank you for your thoughtful review; totally understand the emotion that you have experienced on your visits.

Reviewed By travelleratheart2015 - Amsterdam, The Netherlands

A beautiful little cemetery, famous for being the site of the field hospital were John Mccrae wrote ‘in Flanders fields’ back in May 1915. There is a plaque with the poem written in his hand writing so take some parchment paper and charcoal and you can copy a print - a souvenir that money can’t buy! In the cemetery is also the grave of the young 15 year old soldier. My only complaint is your guides should not guide in a cemetery. I’m a guide myself - give your group a ‘talk’ outside, give them the grave number and let them go in on their own. If I can do it, you can do it! It’s rude to other visitors and just disrespectful in my opinion. 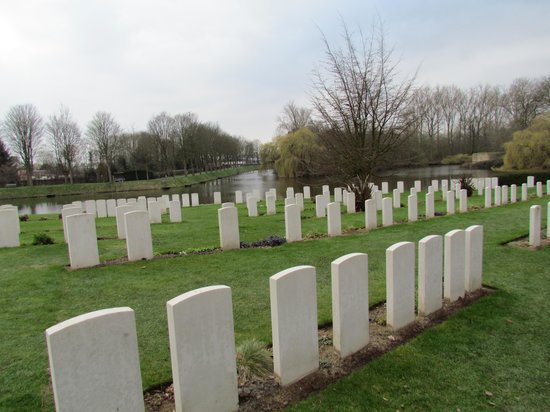 A beautifully situated cemetery, very peaceful. The cemetery is covered in the series 'In Continuing & Grateful Memory - From Ypres to Zillebeke via Hooge' that I got in the bookshop at the Cloth Hall. Really good, has super stories of many of the soldiers buried there. 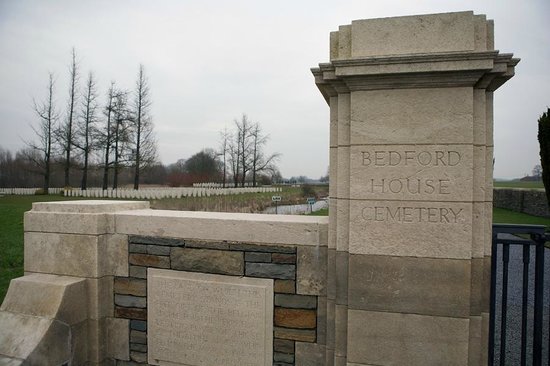 In all, 5,139 Commonwealth servicemen of the First World War are buried or commemorated in the enclosures of Bedford House Cemetery. 3,011 of the burials are unidentified but special memorials commemorate a number of casualties known or believed to be buried among them. Other special memorials name casualties buried in other Cemeteries whose graves could not be found on concentration. Second World War burials number 69 (3 of which are unidentified). There are 2 Germans buried here. Bedford House Cemetery is located 2.5 Km south of Ieper town centre. The cemetery lies on the Rijselseweg (N336), the road connecting Ieper to Armentieres. From Ieper town centre the Rijselsestraat runs from the market square, through the Lille Gate (Rijselpoort) and directly over the crossroads with the Ieper ring road. The road name then changes to the Rijselseweg. The cemetery itself is located 2 Km after this crossroads on the left hand side of the Rijselseweg.

Was visiting a grave near y and Bedford House suddenly appeared. A beautifully laid out cemetery around a moat contain big both first and second were graves. Seems to go on for ever.