Top Things to do in De Soto

What to do and see in De Soto, United States: The Best Places and Tips

De Soto is a city in Jefferson County, Missouri, United States. The population was 6,400 at the 2010 census and is part of the St. Louis metropolitan area. The Van Metre family were first to settle in 1803. The town was organized in 1857 and is named for the explorer Hernando De Soto, who claimed the Louisiana Territory for Spain. De Soto was the city closest to the mean center of U.S. population in 1980. The city celebrated its Bicentennial in 2003. The city made national news on and after May 6, 2003, when straightline winds and a tornado struck.
Restaurants in De Soto Petroglyphs, quaint hiking shelters and incredible Ozark overlooks define the Washington State Park experience. Easy access to the Big River makes the park great for swimming or fishing and the park’s three hiking trails address every type of hike, from easy strolls to power hikes. Buildings constructed by African-American Civilian Conservation Corps stonemasons complement the park and add to its sense of history.

People who know about Native American petroglyphs rate these as tops. Yet they're a stone's throw from the highway, under a canopy to give some protection from the elements. To reach them, you must drive into the state park, and wind your way, following the directional signs. (Note that there are two entrances to the park.)

Since many of the petroglyphs are worn, signs hanging above them show the details, and then it's easier to find them in the rocks.

The park also has good hiking trails - some are a little steep, as these are Ozark Mountain foothills. In the spring near the river, wild phlox and blue-eyed Mary's cover the hillside - a truly beautiful sight. Bring your kayaks and water toys, as there is enough sandy area to launch them. Various types of campsites are available, or just plan to picnic for the day.

You can enjoy a casual afternoon tasting delicious wines paired with authentic Italian cuisine while listening to live music with friends. We are open year round. Our Four Season Room with its cozy stone fireplace will keep you warm in winter months while our beautiful outdoor grounds will delight you in warmer months. Enjoy live music while sipping one of our award winning wines and taking in the beautiful views. We have extended hours on many Fridays, May -October. Please visit our website for special hours and events.

So I had been here once about 6 years ago and it looked so different this time! Lots of places to enjoy the nice weather outside and good selection of food all at a reasonable price. The wine was good and I'd recommend the chardonel at $18 a bottle. Pretty property and on the weekends they have live music. Was a few miles off the highway but not hard to find with gps. 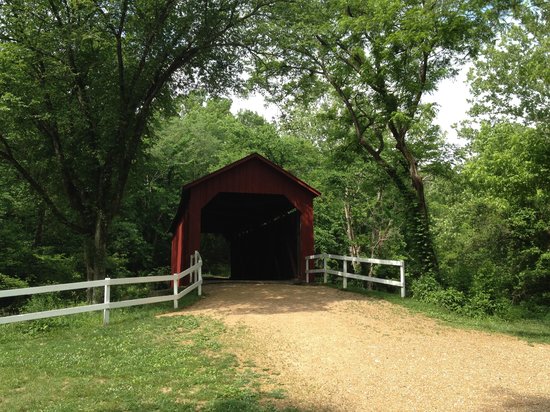 Sandy Creek Covered Bridge boasts the picture-perfect appearance of an old red barn. It was one of six bridges built in 1872 to allow passage from the Jefferson County seat of Hillsboro to St. Louis. John H. Morse built Sandy Creek Covered Bridge using the Howe-truss design, named for William Howe. Howe patented his design in 1840, which featured the use of vertical rods to draw wooden members tight against the top and bottom of the bridge. Three of the four remaining covered bridges in Missouri were built using the Howe-truss design, including Sandy Creek, Burfordville and Locust Creek covered bridges.

This is an historic bridge that has a bunch of picnic tables that make a pleasant stop. There is a dirt (very short) trail that leads up to the bridge from the parking lot. Vault toilet facilities and drinking water are also available here. It's just a quick stop and if you are already in highway 21 or are a history buff, this is a worthwhile stop. 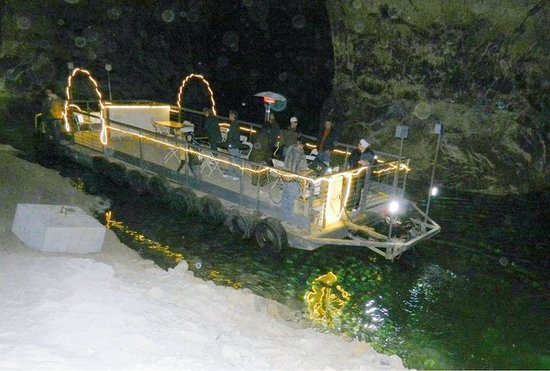 Walked this at lunchtime for ex revise and sight see. Goes on forever and has everything you can thing of. Even Dunkin Donuts 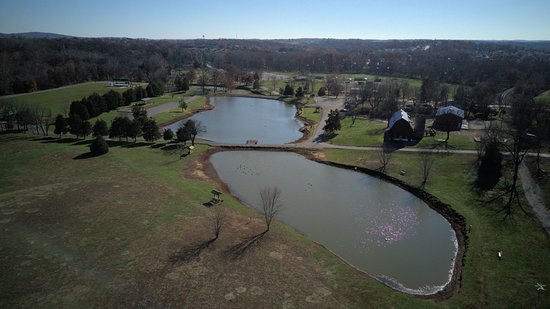 This park has stellar walking/jogging path parked in .25 miles. It also has lakes, fishing, playground, pavilions----everything you need. It's clean and safe. Other joggers/walkers are friendly but give you neede space. 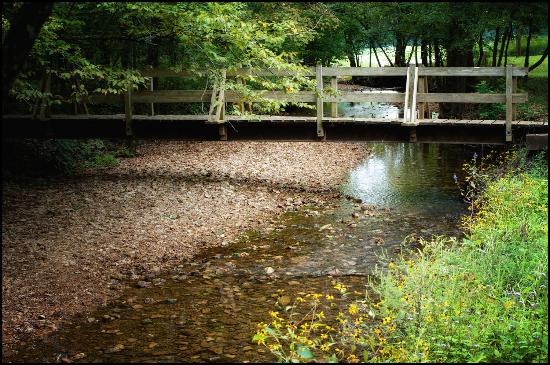 The forested ridges and cool hollows of St. Francois State Park offer visitors a retreat from everyday life. Three hiking trails, including one that allows equestrian access, wind through the forested hills and glades of the Coonville Creek Wild Area. Easy access to the Big River makes St. Francois State Park ideal for canoeing and floating and the many shaded picnic sites and two covered shelters make the park perfect for family gatherings. Overnight guests can choose from more than 100 campsites, in campgrounds with modern restrooms, hot showers, and laundry facilities.

We have visited this park multiple times over the last decade as a place to spend the day picnicking, fishing and wading in the shallows of Big River or in the creek within the park. It's an easy drive from St. Louis for us.

However, we've observed this park must not be getting the funds needed to maintain it because it has been steadily going downhill for the last several years. The grills at the picnic sites by the river have big holes in the floor...so we have to take something to line the bottom to keep our charcoal from falling on the ground. The picnic tables are getting very ragged as well. And, don't get me started on how the bathrooms are (not) maintained sufficiently any more. The pavement on the right side of the road just past the creek as your go further into the park started crumbling several years ago and is now so bad that it's essentially a one lane road there. We all laughed out loud on our last visit when we saw the "road work ahead" signs on that road because there was NO work going on to repair the road...simply cones to try to keep cars from falling down the embankment since so much of the surface has crumbled away.

Is there no money to help this park, or is it being appropriated and just not being used for the purpose it was intended. Please bring back this park to how it used to be.....a safe, well kept place to enjoy outdoors Missouri. We visited this newer winery on a lovely Sunday for the first time. There are many different areas to hang out which are spread out throughout the property. We tried the wine tasting first. Very reasonable, $5 for five good sized pours and you keep the glass. We liked at least four out of the five and decided on a bottle to drink at one of the various tables. A singer/musician was playing some very nice music which we enjoyed. The scenery is beautiful! They have a tent, deck, patio and indoor seating. We loved how the tables were spread out from each other so you're not crowded like you are at a lot of wineries in Missouri. Nice restrooms, a fountain and even carriage rides with a beautiful Clydesdale added to our lovely experience. The employees were very personable and did not rush the wine tasting experience. We ordered a delicious cheese and sausage and fruit platter for $12 but the package of crackers was another $3.00 which seemed a little high. The potato skins were not very good though. We will be back with more friends since we enjoyed just about everything about this winery except for the potato skins. Hoping the other food is better since we rather buy our lunch there than bring outside food which is permitted. It is about 30 minutes from St. Louis, well worth the easy drive along hwy 21 towards Desoto. 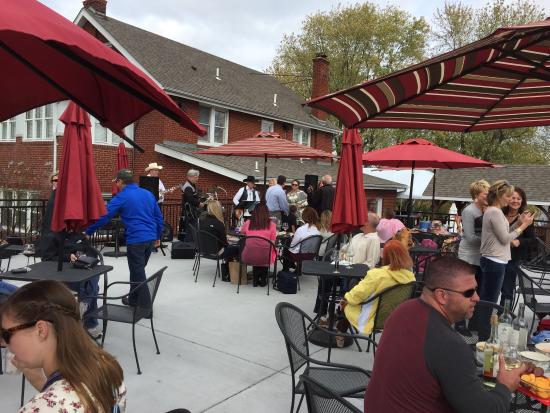 First visit was for a bridal shower! It was ADORABLE & LOVELY !!!! The owners were amazing to work with and so helpful!!! Wonderful music ? & wine ?! Such a beautiful setting & wonderful time, I suggested 7 of my girlfriends meet there for...MoreThank you so much NanaDeDe! I am happy you enjoyed our little winery. Winemaker and Co owner Mark 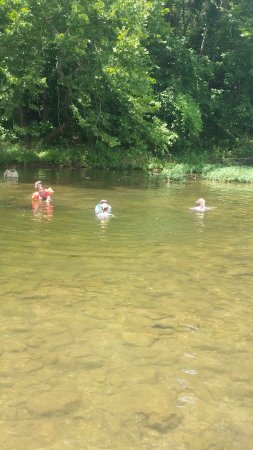 We're new to the town of Desoto and one of the reasons we're falling in love with this little town is Walther Park! I've spent many hot summer days, this past summer, here... bringing my nieces, daughters and grandkids to cool off in Joachim creek or to play on the playground and maybe have a little picnic with Grandma :-) Sometimes, I see fishermen actually catching fish! lol This is just a pretty little park where you can walk on the walking trail (or run). There's even stretching equipment along the trail. Lot's of mature trees and peaceful sitting just to read a book by the creek. LOVE this place!