What to do and see in Birdsboro, United States: The Best Places and Tips

Birdsboro is a borough in Berks County, Pennsylvania, United States. Located along the Schuylkill River, it is 8 miles (13 km) southeast of Reading. As of the 2010 census, it had a population of 5,163. In the past, Birdsboro was noted for its large foundries and machine shops, none of which remain in operation today.
Restaurants in Birdsboro 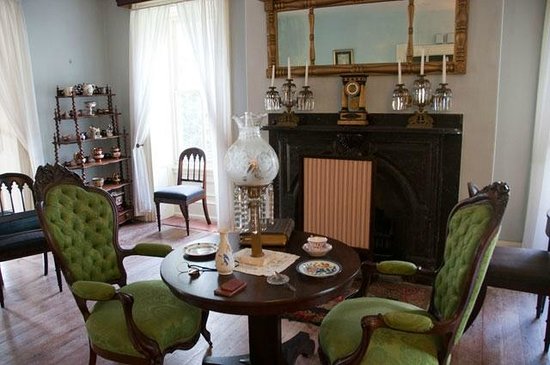 If it was larger I would have rated Hopewell Furnace a solid 5, rather than the 4 I gave. My daughter and I choose visiting Hopewell Furnace because it was part of the National Park system and only about 1 hour from Allentown, PA. But we discovered a real gem when we got there. Learned about a key element of the development of our nation's industrial capability from prior to the US gaining its independence, the production of iron and the community that supported it. And after a wonderful self-guided tour and sand-casting demonstration, we picked apples from the historic site's orchard! Now how's that for fun?

I love all the history and information available here. 6th generation Boone descendent here so it hits home with my heart! 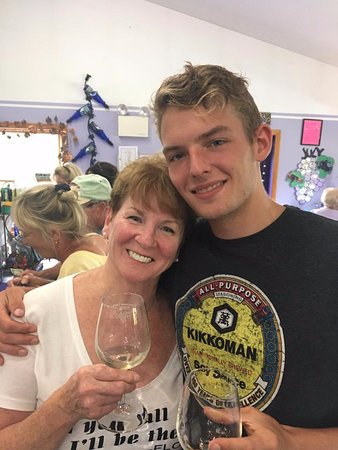 Went as part of the February chocolate and wine event. Also tried out the wine tasting. The staff was very friendly and knowledgeable about the wine. Looking forward to going back in the spring to try out the outdoor sitting. Very picturesque!!

4. GoggleWorks Center for the Arts We didn't realize when we planned our trip the blues festival was the same weekend. There was also an arts and crafts festival at the center. There were lots of different types of art from photography to glass sculptures to jewelry. The glass blowing and pottery demonstrations were great. You can tell they love what they do. We had a great time. I don't think it's a place for young kids but older kids may enjoy it.

Many thanks to Kyle and his crew for an amazing experience! This has been on my bucket list for awhile now. Couldn't find anyone to go with me, so I gave myself an early birthday present. Flight was amazing, views were amazing. A beautiful, yet chilly day for flying. These guys are awesome. A must do! 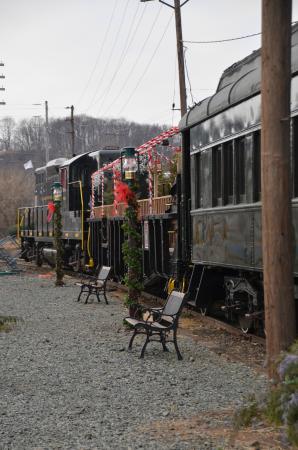 Lost in the deep woods sheltering the Manatawny and Ironstone Creeks is a mythical secret valley. Though today only white-tailed deer, great blue heron, and bald eagles know the beauty of this legendary land, it was once the province of pioneers and patriots. Their stories can be heard in the soft winds whispering through the tall trees and towering trestles of the Colebrookdale Railroad - a magical, forgotten railway to the heart of this Secret Valley. The "Secret Valley Line" is your ticket to a place and time when iron rails connected a divided people and the heart of the nation pulsed with the potent energy of the steam locomotive. Completed by soldiers home from the Civil War just four months after the Transcontinental Railroad united the East and West, the Colebrookdale is a record of epic engineering and heroic human drama. Eight-point-six miles long and a century-and-a-half back in time, the Secret Valley Line beckons you to experience for yourself the unexpected treasures of Southeastern Pennsylvania.

4.5 stars and rounding up! I decided to take my family on a "polar express" train ride this year but have never done this before so was hesitant given the high cost, the 2 hour drive and not knowing if the kids would be bored sitting in a train the entire time. I'm glad I booked this. The train was nicely done and festive. The kids enjoyed it.

There is a daytime train, a 4pm train and a 7 pm train. We booked the 4pm train which I think gives you the best of both worlds. Sunset today was around 4:30pm. We were able to see the creeks and even a small waterfall outside for part of the train ride and then it was dark for that polar express feeling. It ended early enough for the long drive home too.

Each "cabin class" is different and priced accordingly so you need to make sure you book the one you want. We booked the dining car, which is the only one that serves a full meal (as a yelp elite, would you expect otherwise?).
The dining car was decorated very nicely and the food was surprisingly good. The pre-set dinner included a generous portion of Turkey, ham, sweet potatoes, mash potatoes, stuffing, green beans, a side salad and roll and a small dessert and tea or coffee. My husband and I really liked the food but the kids barely ate anything. My suggestion would be to have a kid-friendly meal option for the kids. It would cut down on wasted food, unnecessary cost to the company and would be more preferable for the kids.
Santa came onboard midway and you had the opportunity to take pictures with the photographer ($10 for the photo).
There is also an outdoor car which is open to all passengers.
All cabin cars receive hot chocolate (half cup) and a cookie. My kids asked for marshmallows but unfortunately, toppings are not an option (suggestion #2....).
The tables in the dining car fit 4 people and all tables were full. If you are not a party of 4, 8, ,12, etc, you will be sitting with strangers. For a family of 5, this is not ideal. The seats are assigned and I had called ahead to have them split us 3 and 2 and confirmed again on the the way there as well. However, the seats that they assigned to us were 4 and 1. My husband ended up sitting by himself, although they did put him in the table behind us so he wasn't far. I noticed this happened to another family too. It wasn't ideal but it worked out ok since my husband didn't mind. Not sure what they could do about this since the cabin car is very narrow but if something could be done, it would be awesome (suggestion #3).

There weren't many activities on the train but in the dining car, we were constantly being served something. And then after dinner, we had our photo op with Santa. I don't know what the non-dining cars did the entire time. I suppose there were some volunteer carolers that walked around some of the cars for entertainment but they aren't a "scheduled act" that's guaranteed to be there. If there were some activities, maybe a funny skit or show, that would make this perfect!
We've been on a Christmas bus ride in Hershey Park where there was an entertaining and funny act as well as interactive caroling. (Suggestion #4).

All in all, this was a fun, festive train ride that we enjoyed, albeit a little pricey, but it's once a year and the kids don't stay little forever, so why not? 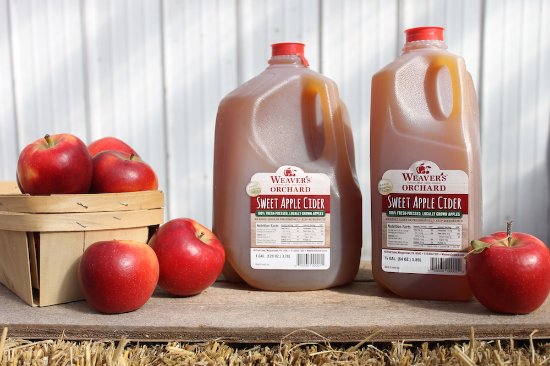 A few weeks ago my girls and I went to Weavers Orchard to pick berries and cherries. Though I am not a fan of raspberries and this year the strawberries were a bit small. The cherries were amazing!!!! Yellow and dark red cherries, the sweetest...MoreThanks for your review, and we are so glad you enjoyed the cherries. Hope you made it back to pick peaches as well! 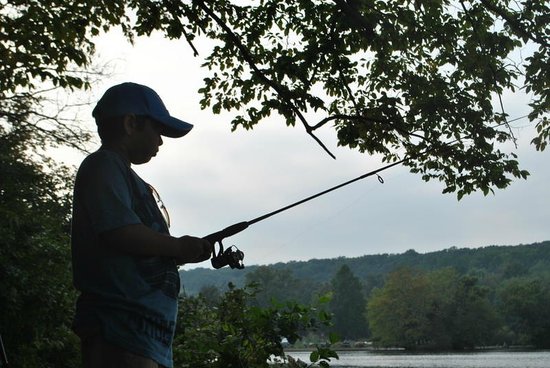 French Creek State Park is very, very nice.....the roads are good, and there's fishing, hunting, canoeing, hiking, swimming, and nature walks, galore. There are also some nice camp grounds for tent and/or RV camping. Get back to nature and visit this place. 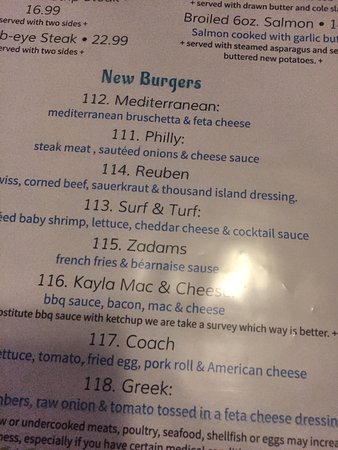 I've been in here a few times, hoping to discover what it is that has others raving about it. The problem I have is although the food is good (especially the burgers), I've never felt welcome or comfortable in here. You know that feeling one gets when they walk into a place for the 1st or 2nd time, and everyone in there turns around, looks at you, but doesn't crack a smile or say hello? Well welcome to the Douglassville Hotel. Every time I've walked through the door, I get the feeling that I just don't belong here, and believe me, I'm by no means paranoid....this place just doesn't give me a nice warm fuzzy feeling.....perhaps it would be different if I went with a "regular", who knows everyone, like in Cheers.

Ridgewood Winery is located on Ridgewood Farmstead, a Nationally Registered Historic Site built in 1725/ 1811. We offer many varieties of Award Winning dry red, white and sweet fruit wines available during normal hours of operation. We’re proud to be utilizing this farmstead as the location for our winery here in Berks County. Our historic venue is also used for hosting many celebratory events (i.e. bridal showers, weddings) so stop by and see what we are all about. William and Tracy Smith

We stopped on the way home with out two kids. Sampling included a glass which was great and the wine was excellent. We are semi sweet drinkers and the variety was great! Watermelon wine is fabulous and blackberry too. Bought a whole case of wine! Definitely will be going back for more!