Watertown is a city in Dodge and Jefferson counties in the U.S. state of Wisconsin. Most of the city's population is in Jefferson County. Division Street, several blocks north of downtown, marks the county line. The population of Watertown was 23,861 at the 2010 census. Of this, 15,402 were in Jefferson County, and 8,459 were in Dodge County.
Things to do in Watertown 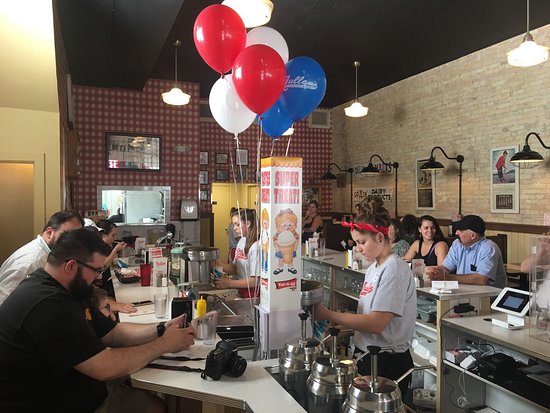 Generous scoops of creamy, flavorful ice cream! Clio had already eaten around the edges before taking the pic of vanilla - caramel - cashew cone. We both had burgers, hand pattied with fresh lettuce, tomatoes, and raw onions on a simple bun and split one order of fries. They were excellent (as usual, Clio used a napkin to remove extra grease .. she did give it a 9 out of 10) and the fries were perfect. It was extremely busy, but our server was great, burger & fries were hot and ice cream was cold. Prices very reasonable - basic burger $5, big order fries $3, generous single scoop ice cream $2.75. A bargain! 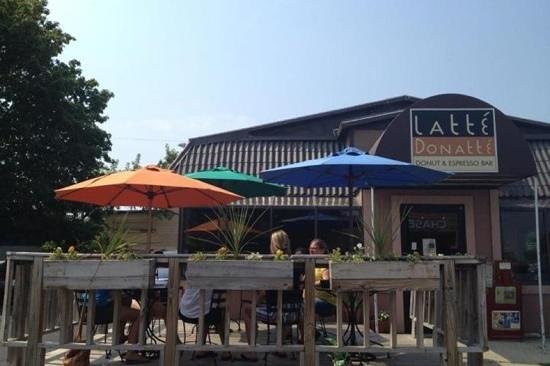 We are a small family owned Espresso bar & pastry Cafe&apos; founded in 2003. We proudly brew & serve Colectivo (Alterra) Coffee which delivers big flavor that makes coffee worth drinking. All bakery items are made from scratch every day using seasonal and local ingredients whenever possible. We pride ourselves on exceptional customer service. Stop by and visit us in our cafe&apos;, drive thru or on our outdoor patio.

I frequented this coffee shop several times while I was in the area working recently. The barista staff were not always friendly or prompt, but the coffee was good. I also purchased coffee beans sometimes to make my own coffee later. They have a nice selection of items for sale as well. 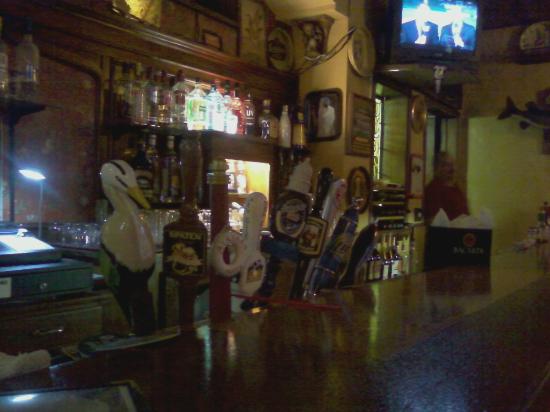 Elias Inn Watertown, WI - this was a fun first visit. Ron Faiola's "Wisconsin Supper Clubs" brought us in. We started at the bar, enjoying a couple Wisconsin classics - Brandy Old Fashioneds while learning a little history of the place from the bartender. The evenings host prepared our table and escorted us into the eclectic dining room where our server, was great - she signed our book and informed us she'd been serving at Elias Inn over 20 years and loved it - and it showed, she took great care of us. "She" had the scallops and I had the Rib - our entrees and sides were all delicious - this was a really fun visit. We're looking forward to visiting Elias Inn again when we get that direction. Stop in and have cocktail, stay for dinner - I know you'll be glad you took time to experience Elias Inn in Watertown, WI 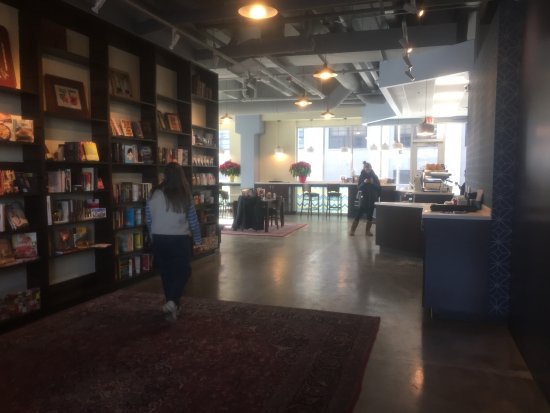 A tremendous selection of drinks with a cheat sheet if you are not up to date with Starbucks selections of coffees. I think their rolls and scones leave that big coffee place in the dust. They are not dried out and stale, but fresh and flavorful. They also have a very good selection od books. The service is great and pleasant. The business treats a customer with a smile and a kind word. 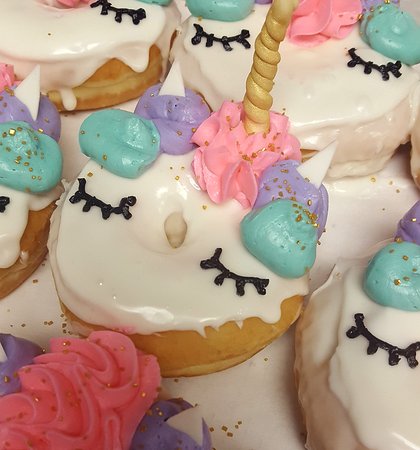 I purchased some treats for work while working in the area. Several of my coworkers had recommended it. I thought they were tasty. I would like it if they had smaller sizes, so we could sample more of the fare. 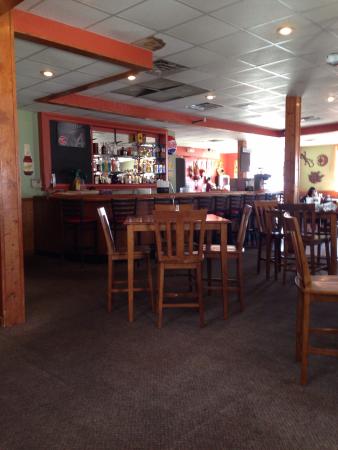 We had a chance to eat here for lunch and were very pleased with this choice. Staff was friendly, quick and order was delivered hot and tasty. Chips were offered initially and were good but probably out of a bag, salsa was likely made fresh and was good. Overall, a good choice and would go again. large portions and a good value. 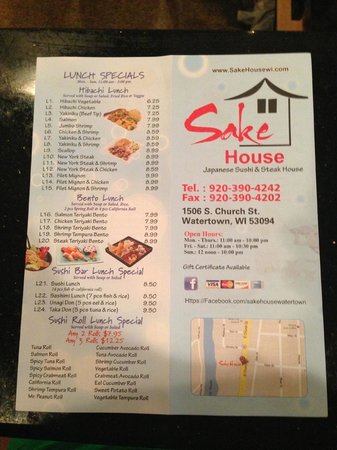 We are visiting from out of town and found this place in TripAdvisor. The reviews match. We were not expecting to find good sushi is this small town, but we were impressed. Great, fast service. The sushi was better here then you find in bigger town, but not pricey.

I went to Amado's with a group of about 30 people, at 4pm on a Friday afternoon, and we were seated right away. Shortly after we were seated, we were served chips and salsa, which were amazing, and the waitress took our drink order, which was served within minutes. The Margarita on the rocks is a must have! Most every person in the group had a different entree, and everyone seemed very pleased with their choices. My meal was delicious! We were taken care of with smiles throughout the almost two hours were there. If you're visiting the area, ad are looking for good food, service, and atmosphere, this restaurant is a must go! 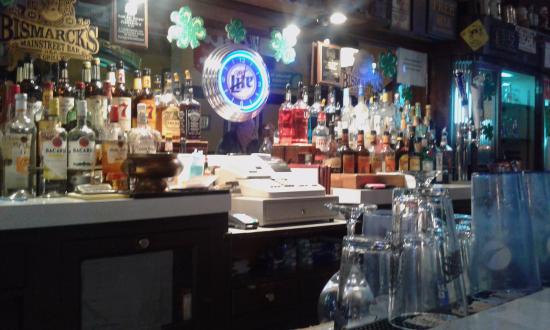 Excellent food all around, known for award winning burgers. Great place for food, friends, and a place to meet new friends.

Several couples met here for a gathering, coming from many miles, including the West Coast! Our server was attentive and efficient, and the food was great . . . choices included melts, burgers, sandwiches, and wraps. All in the group were pleased with Bismarck's. Prices were unbelievably reasonable! The streets of downtown Watertown provided interesting places to visit, mostly antique shops. 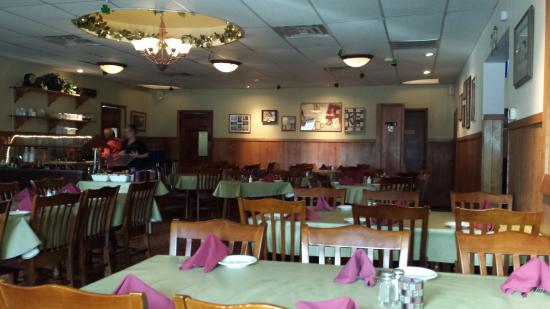 Our group of six stopped in on Thursday evening to avoid the weekend rush. The restaurant is closed Tuesdays and Wednesdays. Family members had dined here previously and recommended it. I liked the old fashioned supper club ambiance, which reminded me of establishments our family used to patronize fifty years ago.

Patrons were few on Thursday, so service was fast. The menu was extensive - seafood, steaks, surf and turf, pork, chicken, ham, lamb and duck entrees. You can also order lighter meals, like sandwiches or entree salads. Our group sampled a good variety of the menu. Dinner entrees range from about $13-$24. Sandwiches and salads are $7.50 to $14.

I started with salad bar, which had a good selection of fresh veggies plus pre-made salads, like slaw and pasta salad.

I haven't eaten fried food in decades, but the supper club aroma made me crave an old fashioned fried chicken dinner, so I splurged on the French Fried Half Chicken dinner @ $12.95. You can order all white for an additional $1.50. The entree came with salad bar, potato, soup of the day and bread.

Everything was excellent, except for the chicken. The breading recipe was really good, but there was literally no meat on the bones. The four pieces were very tiny, and there was no breast. I was very disappointed.

Hubby ordered broiled chicken breast with baked potato, salad bar, etc. He said the chicken was awful - not cooked enough and really tough. He ate two bites and sent the rest home in a box for the family dog.

The restaurant has a full bar, including a decent selection of wines. Service was excellent but, based on two unsatisfactory dinners, I wouldn't go back.