Vatra Dornei (Romanian pronunciation: [ˌvatra ˈdornej]; German: Dorna-Watra; Hungarian: Dornavátra) is a city in Suceava County, north-eastern Romania. It is situated in the historical region of Bukovina. Vatra Dornei is the fifth largest urban settlement in the county, with a population of 13,659 inhabitants, according to the 2011 census. It was declared a municipality in 2000, being the newest and smallest municipality in the county. The city administers three villages: Argestru, Roșu and Todireni. Vatra Dornei is a well known spa and ski resort in the Carpathian Mountains.
Things to do in Vatra Dornei 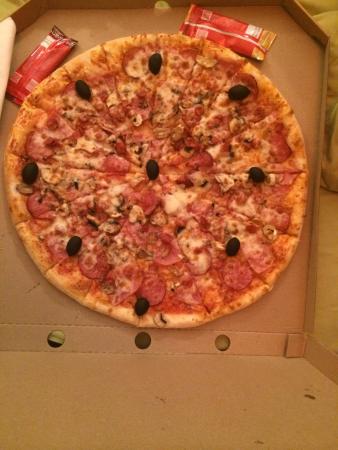 Before leaving Vatra Dornei, we've stopped by to have a quick pizza for lunch. The place seemed to have a nice Terrace, a few empty seats so we thought it's going to be swift. 3 waiters were serving people on the Terrace, and even though they passed by our table several times they didn't bother to give us the menus for 15 minutes. Thus, we've picked up the menus ourselves and chosen pizzas and papanasi for desert. Another 10 minutes (25 from our arrival) have passed and still they didn't stop by to take our order. So we went inside and placed the order with one of the waiters from the cash register. She told us that the pizzas shouldn't take more than 15-20 minutes. We've waited for another 40 minutes! The only good thing in all this experience was the good pizza. However, waiting for almost 70 minutes for a pizza is definitely not worth! 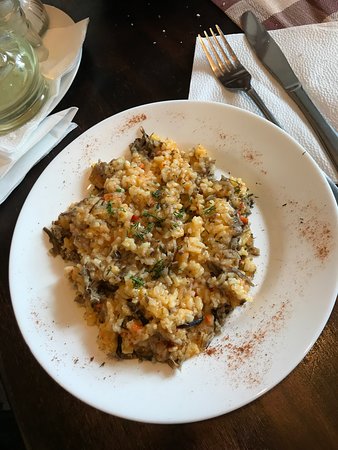 After a good experience in winter, we decided to go afgani to the restaurant in one of the recent trips in the area. This time I was dissapointed with the food as my dish was cold and with the service as it took far too long. Will not go back! 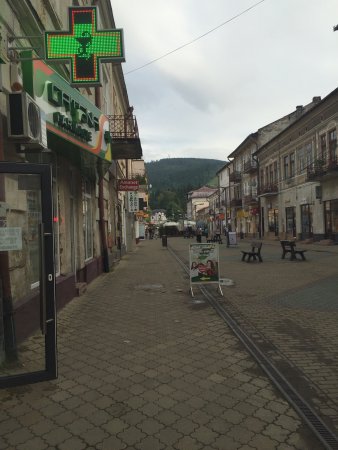 Just had lunch for 3 on main stretch, soups and couple of mains ordered. Whilst the servers were ok and seemed pleasant, the food took forever to arrive- 40 min for the soups and only after asking several times. Being on a schedule, we asked to cancel the other two dishes but were told they cannot. So we ended up with one of the mains in a box and the other cancelled. The bread was dry and one of the soups was just a variation of the tripe soup which was swerved to others a lot quicker. No idea why the service was sooooo slow and to make matters worse, the staff were complaining inside about our complaints (?!), unaware that I was still there. I would not visit again for sure... There are other places that have better service and overall a better attitude towards paying customers. Sadly this contributed to less good first impression of the resort altogether. 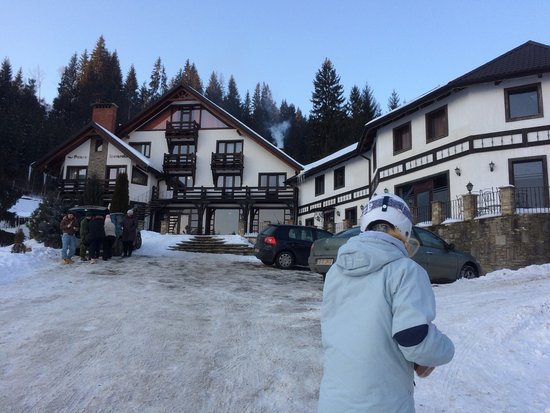 We stayed for 4 nights at this lovely pension. Great food, large veriety of fish especially trout. In fact they grow the trout's themselves! The rooms are cozy, the water in the pool was warm! All in one it was a great stay! The access is easy and the slope is near. The staff is nice and the owner is extremely helpful in everything. 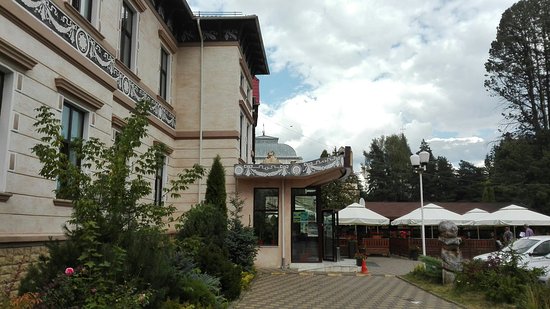 We came to visit for a while the town, and we decided to choose this restaurant to take our lunch. Because it was so warm outside, we decided to stay on the beautiful and big Terrace. Very peaceful and good view on Terrace. The waiter came right away and we chose our meals. We served a very good bortsch of chicken with home noodles and soup of beef. Really very tasty, and good focaccia with olives. For the second meal we chose confit of duck with mashed potatoes, and "tigaie bucovineana", a mixed from meat and vegetables. All it was so tasty. We spent here a pleasant time enjoying our food. When we will come back in town, for sure we will come again here. 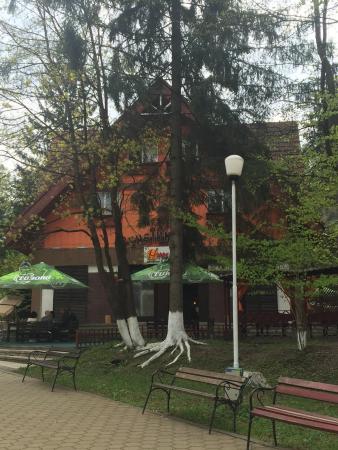 So, I traveled for the first time to Vatra Dornei and I stumbled across this little place, in the middle of a park. The Terrace offers cover from the sun, but it's in the park, so if you don't mind the usual fuss of a park, it's cool. Their prices are ok, the food is good (you should try the hot chicken pans) and the waitresses are cute and always smiling.

We ate several times at restaurant Dorna while we stayed in Vatra Dornei because we where sure that the food will be very good for children. They have a dedicated menu for children. The serving is pretty good, but we felt a little arrogance. They have a great Nutella hot chocolate. We ordered each time at least two of them. However, the last one was totally different from the previous one. Overall, I recommend this place for nice atmosphere and good food in Vatra Dornei.

If you are looking for a place away from the usual city setup, come to our rustic and cozy restaurant to enjoy some delicious food, fresh air and a great view over the Mountains. We like to keep things simple and tasty. In our menu you can find: - delicious pizza - mouth-watering roasted chicken - juicy ribs - savory grill