I had purchased two loaves of bread previously on our Big Island trip before stumbling on the actual bakery. Apparently, most of the bread in the groceries stores is baked here. This visit though was for some delicious pastries. The place can be pretty busy at times as tour buses stop here. There are various places outdoors to enjoy your purchase. Fresh salads and sandwiches are available, so this makes for an all around great food stop. There is also a nice selection of those trinkets you want to take home. Clean place, good food, friendly workers make this a 5 star stop.

We arrived in Naalehu hungry at 7:15. My wife reminded me that Hawaii shuts down early and, we aren’t exactly in prime tourist country. I smugly pointed out the 'open until 9' sign as we pulled into Shaka’s. Besides us, there was a group of four already with their food, and some local boys hanging out. The food was great, unfortunately the Shaka was in short supply. We really got the feeling the waitress didn’t want to serve us and would be happier if we just left! The reception was chilly, but the hamburger and chicken Katsu were both hot, good and filling. The service was slow, and we weren't finished until 8:30. By then, the chairs were already stacked on the tables and the outside lights turned off.
The food was good enough I will give them a second chance… and arrive earlier too! 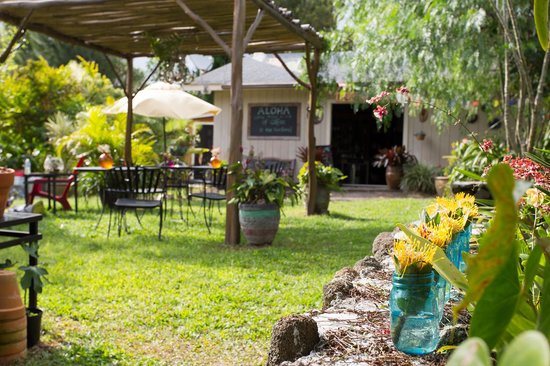 Thank you for your continued patronage! Southernmost Coffee Shop in the USA! Come in for a specialty espresso drink either hot or iced, have a delicious baked good and wander through our three commercial greenhouses filled with orchids, bromeliads and anthuriums! Pre-made sandwiches and snacks usually available. Bring in your own bottle or cup for water refills.

We stopped in here by chance on a drive to volcano park and came back three times the coffee was so good. The macadamia tarts and other treats are beautiful. The third time we stopped we had the most unbelievable caramel frappe. Beautiful setting and gardens. Most helpful and pleasant barista.

Excellent baked goods, sandwiches and soup. We ate lunch here but also purchased sandwiches and baked goods to take back to our Bed & Breakfast in Volcano for dinner. Everything was good. It can get busy here but service is prompt. Lots of free parking onsite.

A great place to stop between Hilo and Kailua-Kona, or on the way to Volcanoes National Park. The owner was so nice and attentive. She said she wanted me to be happy with my order. Both, my husband and I, were extremely happy with our coffees. He had plain black and I had a caramel macchiato which tasted like heaven!

The truck owner sets small tables and chair outside. So, one can either sit there, take a break from driving and sip on his/her coffee or take the drinks on the go. Mine stayed nice and hot for quite a while.

It is the purple food truck parked across the street from the Naalehu bake shop.
We tried the garlic shrimp plate and the lemon pepper garlic plate and they were excellent. It came with a scoop of rice and a nice small salad. Everything was fresh and great tasting. There are not many places to eat in town so we were very happy to finally be able to order some food at that place, because they were closed the first 2 days we were in town (Monday & Tuesday). We also had a glass of the fresh Kombucha and it was very good! Plus the owner/chef was super friendly!

Visited this cool restaurant/bar a few years ago and was impressed with food and service. We had the Loco Moco and Pork/Cabbage plate. Both of them were very good. Macaroni salad was delicious.
The service was not quite as good as the food, thus the 3 stars. Our waitress appeared more interested in talking with her friends than taking our order or attending to our table.
Nevertheless, we would return to this location.

Well, I tried the kava. I am not a vapor (vape-er? viper?) haha! Anyways, it was fun and informative. I was impressed with the testimonial that the vape helped Delsey stop smoking completely, and Gary on the way there. Wow!
The kava was medicinal and awesome, what an interesting history and use by the indigenous peoples of the South Pacific.
When Gary and Delsey ask you to come, sit, and talk story, they mean it! They are kind, welcoming, and reassuring. I felt right at home and bought some Donkey Balls (chocolates, tee hee!) there too. They sell local coffee and will also soon have an espresso machine. The coffee was strong and delicious! Pop by,they are in the back of the building that has the rainbow flag out front. You can't miss it!