Top Things to do in Tahaa

The charming island of Tahaa is scattered with small villages nestled along hillside bays. Known as the "vanilla island" because of its large-scale production of the fragrant bean, Tahaa is the ultimate in romantic escapism, tickling your nose as it tickles your fancy with gorgeous views, beautiful beaches and serendipitous lagoons.
Things to do in Tahaa 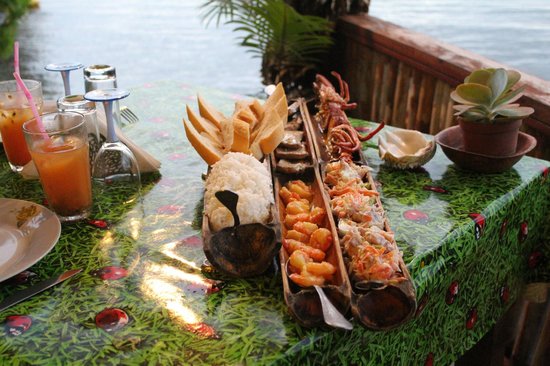 Le Taha'a Island Resort where we were staying recommended Chez Louise - - unusual for me but I hadn't done any research on this and took the Hotel's recommendation in good faith but had no idea what to expect.
Well my husband and I were certainly a bit taken a back when we first arrived, effectively at someone's home at a very casual setting of tables/chairs by the waterfront.
Anyway, we waited to be served and in a short time the most amazing feast came out of the kitchen! As previous reviews have said, there is no menu as such - just one size fits all of the most incredible seafood with divine sauces that you will probably ever experience!
So, ignore the setting and the set-up and just enjoy great cuisine with beautiful people who share their home with you. 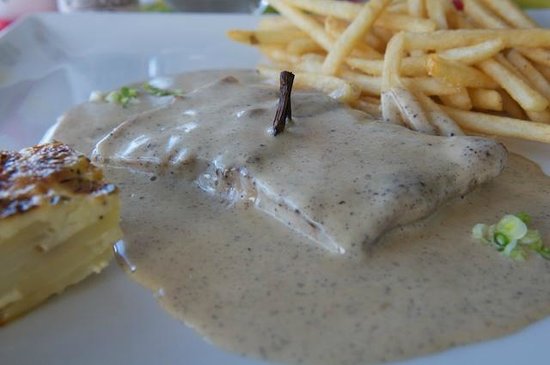 After a bicycle round trip around the island, the stop at the Tahaa Maitai was a gift from the sky. Delicious french and local food, and, what's not the least, an amazing whiskey reserve. This place and its lovely chef Bruno are already worth the flight to French Polynesia. We had a group of eight people and had dinner here. The price was great and so was the pizza. Everyone enjoyed what they ordered and we would definitely return here. They have other items on the menu besides pizza also. A few from our group had desert and enjoyed that too. 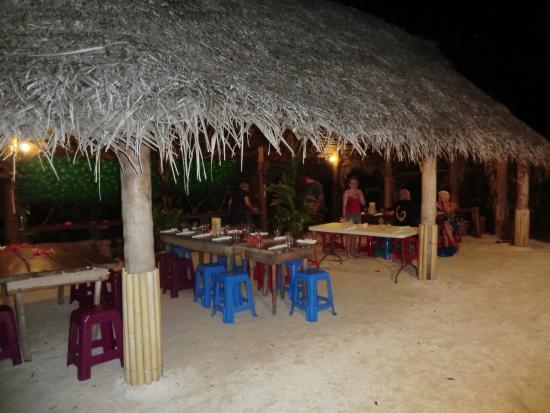 Le Ficus is a small, family-owned and run restaurant located on the east shore of Apu Bay, Tahaa. Based on recommendations from our charter company, Sunsail, we sailed in to Apu Bay on a Friday afternoon to catch the Friday dinner buffet and dance show, and were not disappointed - both were great! We picked up a mooring ball just off the Le Ficus pier around 200pm, and and phoned ahead to secure dinner Reservations for that night. (the place is also easily accessible from the main road that rings the island). The dinner started at 700, and the show started around 800. We went ashore about an hour before dinner, and walked around the island a bit. At about 645, we returned and they had drinks and our reserved table ready for us -nice! Once the majority of diners showed up (maybe 30 in all), the staff took us to the in-ground pit oven, where much of the evening meal had been prepared, Tahitian style. They discussed all the techniques used in preparing the food, including how the family grandmother makes all the woven leaf mats used to keep heat and smoke in the food. Very cool! After the discussion, they served us the food buffet stayle...LOTS of food, with many options...chicken, fish, plantains, taro, banana/tapioca dessert...everyone in our 5-person group found something they liked! After the meal, the tahitian dance show started...About 7 or 8 musicians (most of them related to Le Ficus family!) playing ukeleles, tahitian drums, etc, played several nice introductory songs, and then the dance group started - about a dozen women and men in the troupe all told. The women first came out and to the beat of the music, showed about a dozen ways to tie up and wear pareus...this was actually really interesting. they then asked for several audience members to come up and demonstrate the same thing - one of my crew was invited up, and she loved it! After the paeru tying was done, the women started dancing to the VERY fast Tahitian drum beats (oteas) - even better! The men joined in with some very energetic moves, and then both completed the performance by doing several versions of fire dancing...really cool! At the end, the performers invited all the audience up to dance as well - really fun! The troupe really seemed to like what they were doing - this was the best Tahitian show that we saw while in French Polynesia. My crew loved the experience. I strongly recommend it!
My experience at Le Ficus, whether it be the food, atmosphere, or the Polynesian show, far exceeded my expectations. I would do this again in a heartbeat! 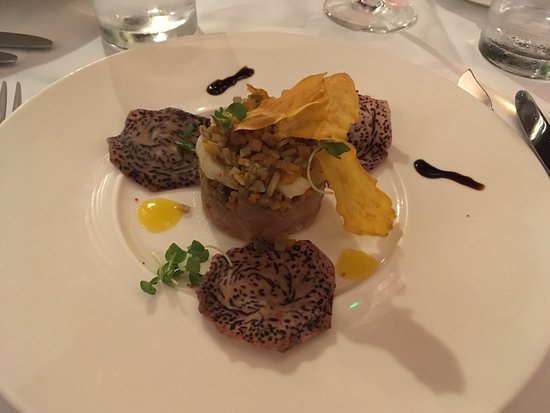 Le Vanille is the main restaurant of Le Taha’a. We dined there daily for an excellent included buffet breakfast, complete wiht eggs or crepes to order. Lovely friendly staff. We dined there four of our five nights, the other at Ohiri, and thoroughly enjoyed the food. Excellent foie gras in several ways (loved both the marinee and poele preparations); red thon; fresh fish; grilled shrimp Polynesian style with a tasty coconut milk shrimp; delicious carrot soup, and excellent ice creams/sorbets for dessert. It’s on the second floor of the huge main building that looks like a tree house; elegant in its simplicity. Le Taha’a is on its own motu, and the main island isn’t like Moorea or Bora Bora where you go there to go to other restaurants. Staying at Le Vanille worked perfectly for us. Ohiri was also excellent except for the silly “men must wear long slacks and covered shoes” requirement which they need to lose if they want to have people dine there. No need for it in a classic place in the tropics. The best part about Le Vanille and Le Taha’a in general is the terrific friendly staff who make you feel so welcome!