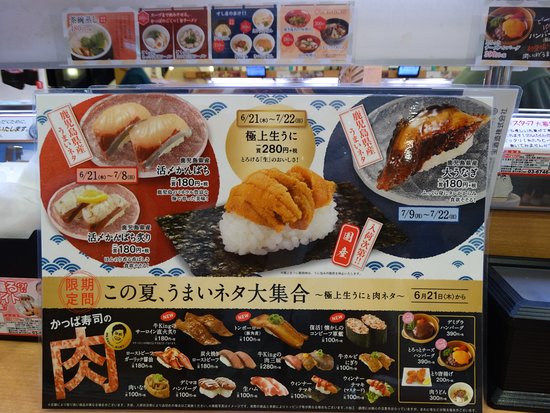 It looks like a standard family-style restaurant from the outside, and the waiting area and booths won't really change your mind. If you only speak English, and go when it is busy, you might even be inclined to walk right out of the restaurant frustrated, as we did the first time we popped in.So if English is your only language, go when it is not too busy (3pm works), and the wait staff will happily help you. They will want to know if you want a booth or a table, and then they will sit you down and leave you alone. All ordering is done on a touch-screen that *CAN* be switched to English. Once you've done that, the restaurant becomes very easy to work with!Tons of food options to choose from (mostly sushi), and priced very well. The quality of the sushi is quite good (not "fancy" quality, but good!), and the prices are incredibly low (108Y for most two-piece orders). This low-price and ease of ordering is really what sets this restaurant apart, because it allows you to try things you might not otherwise try. We had a few misses that weren't to our tastes (cool summer egg custard, and the flounder), but we also had a number of things for the first time that we really enjoyed (tempura squid, Kobe beef, yellowtail, seared tuna). The flexibility of ordering also allows you to go there for a light lunch or a large feast - just order however much you want and pay accordingly!Now for the best part. You order on a touch-screen, and wait for a few minutes, and then a small, toy-sized bullet train pulls up beside your table and drops your food off to you!A great experience to try once, and good sushi and very good prices. We ended up eating here three separate times, clocking in at anywhere from 750Y each to 1000Y each.A couple of other notes:- they DO take credit card- water is available from pitchers near the front- the green powder in the plastic container on your table is green tea powder and can be mixed with hot water from the spout on your table- wasabi packets are on the moving belt if you need more wasabi