Top Things to do in Dorval

Discover Restaurants offering the best Greek food in Dorval, Quebec, Canada. Dorval /dɔːrˈvæl/ (French pronunciation: ​[dɔʁval]) is an on-island suburb on the island of Montreal in southwestern Quebec, Canada. In 2011, the Canadian Census indicated that the population increased by 0.7% to 18,088. Although the city has the largest surface area in the West Island, it is among the least densely populated. Montréal–Pierre Elliott Trudeau International Airport constitutes about 60% of the city's land, forcing all of Dorval's population to be concentrated in the southern part of the city.
Things to do in Dorval 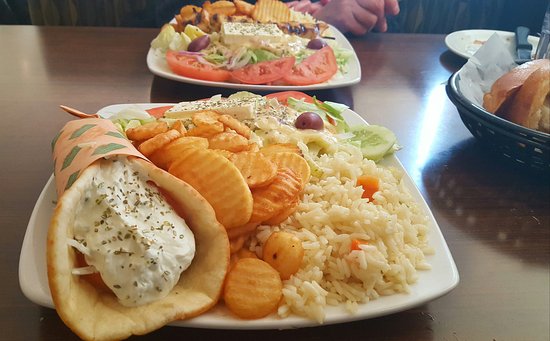 We were 8 people who were celebrating 2 birthdays last night at Marathonâs in DDO. I brought in my own birthday cake to serve later on after dinner. Service was fast and efficient, as usual. We ordered a few appetizers which came in a timely fashion which we ate with their yummy garlic bread. Their saganaki is a MUST! Basically, itâs some sort of Greek cheese which is breaded and fried and served with lemon wedges....to die for! We also ordered kapanisti, a thick, spicy red pepper dip, also delish. Meals ranged from chicken pita platters to doner pita platters and souvlaki stick platters, all served with fries and salad. After the meal, our waiter brought out the birthday cake and after we sang to the birthday people and they blew out the candles, our waiter took the cake away and sliced it up and served it to us. There was no charge for this service. Marathonsâs...always delicious and always good value.

When the mall renovated and "Kosta's" was no longer there, it caused genuine panic for my friends and I. Thankfully, they simply renamed themselves as "Kouzina's" and still offer excellent Greek food. I consistently go for their gyro pita because it makes for a satisfying snack or a good meal option. 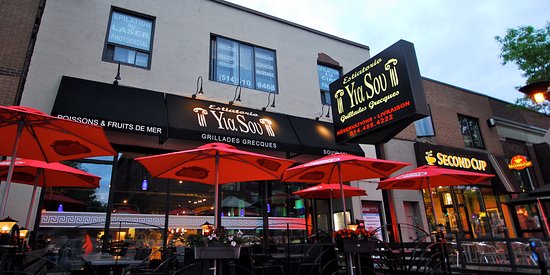 Located in the west-end of Montreal. Yia Sou serves up Montreal's best Greek cuisine with exciting dishes and unique ambiance that can fit anyone's budget. We use only the finest ingredients. Every dish is made to order!

Huge portions of great food. I got their 2 gyro pita plate (24$), which came with fries, rice, tzatziki and a choice of soup or salad. They give complementary pita and butter before your meal. Their pita is so soft and chewy; really the best pita I've ever had! Service is quick and friendly. They have a pleasant outdoor terrace for warm days. The menu is extensive and authentic. There are also many vegetarian options. There is a selection of delicious desserts as well. I would definitely recommend this restaurant.