Top 10 Things to do in Vitoria-Gasteiz, Spain

Vitoria-Gasteiz (/vɪˌtɔːriə ɡɑːsˈteɪs/, Spanish: [biˈtoɾja ɣasˈteiθ], Basque: [ɡas̺teis̻]) is the seat of government and the capital city of the Basque Autonomous Community and of the province of Araba/Álava in northern Spain. It holds the autonomous community's House of Parliament, the headquarters of the Government, and the Lehendakari's (Prime Minister's) official residency. The municipality — which comprises not only the city but also the mainly agricultural lands of 63 villages around — is the largest in the Basque Autonomous Community, with a total area of 276.81 km (106.88 sq mi), and it has a population of 242,082 people (2014). The dwellers of Vitoria-Gasteiz are called vitorianos or gasteiztarrak, while traditionally they are dubbed babazorros (Basque for 'bean sacks'). Vitoria-Gasteiz is a multicultural city with strengths in the arts, commerce, education, healthcare, architectural conservation, aeronautics, vehicle industry, oenology and gastronomy. It is the first Spanish municipality to be awarded the title of European Green Capital (in 2012) and it is consistently ranked as one of the 5 best places to live in Spain. The old town holds some of the best preserved medieval streets and plazas in the region and it is one of very few cities to hold two Cathedrals. The city also holds well known festivals such as the Azkena rock festival, FesTVal, Vitoria-Gasteiz jazz festival, and the Virgen Blanca Festivities.
Restaurants in Vitoria-Gasteiz 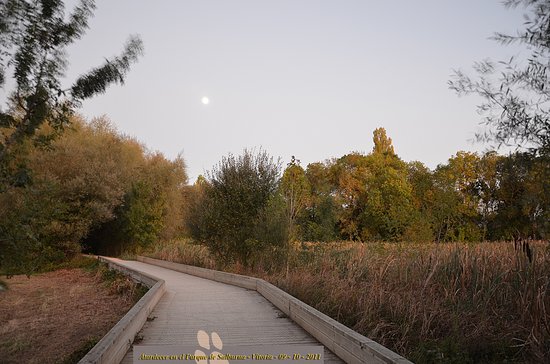 There are many hits around this Green Ring around the city of Vitoria. On the East you can go birding during the whole year or see the deers. On the West you can relax beside a lake or having a walk along the river to the North 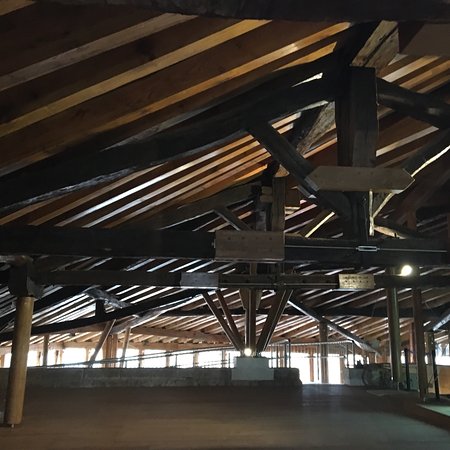 The guided tour is interesting, especially seeing how and why the Cathedral was in such a precarious condition. However, we felt that the tour was too rushed. There are lots of information panels that we didn't have time to look at and the part under the roof where they were working and which looked really interesting wasn't explained at all. 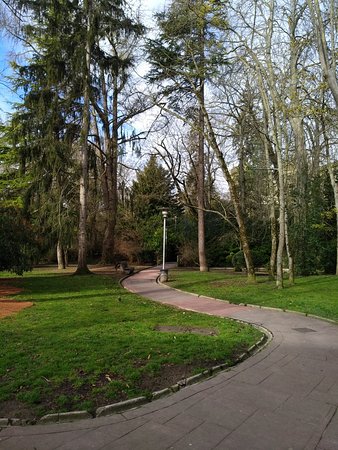 If you are visiting Vitoria and feel like a quick stroll after a Basque menu, this is the perfect place! A beautiful walk in all weather. 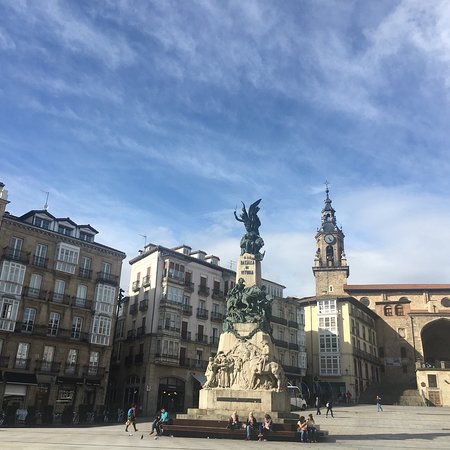 This triangular square is the centre of Vitoria-Gasteiz. All city life starts from it. It´s quite simple and austere but it means a lot to the locals. On the top part we find the Church of Saint Michael which hosts in its interior a superb statue of the 'Virgen Blanca' (White Virgin), the protector of the town. At the center of the square, there is a monument conmemorating the Battle of Vitoria of 1813 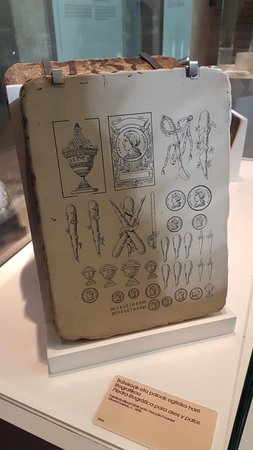 The Fournier Playing Card Museum is located in the Palacio de Bendaña. Heraclio Fournier Gonzalez founded in 1868 a company that manufactured playing cards in Vitoria. His grandson Felix Alfaro Fournier inherited the company and he started collecting playing cards. Felix was the one who founded the museum. It has the largest collection of playing cards in the world. The oldest playing cards come from the 15th century and there are Gothic, Renaissance, Baroque, Neoclassic and modern cards. The cards come from many different countries. Many have wonderful artwork. The process of making playing cards is explained in the lobby of the building. The exhibits are ecological because they light up only when one approaches them. 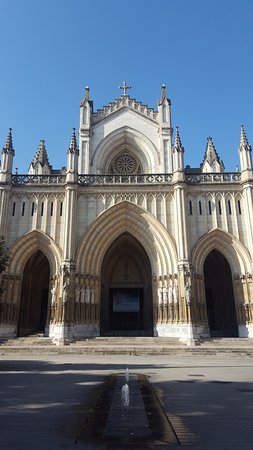 The Cathedral of Mary Immaculate is located at the Plaza de la Magdalena, 1. It is also called the New Cathedral. The church was built in 1907-1914 in its first phase and the architects were Julian Apraiz and Javier Luque. The second building phase occurred between 1946 and 1969. The church was consecrated in 1969 by Cardinal Dell'Acqua. The style of the church is Neo-Gothic. There is a crypt that one goes to by using a side door. The church was built over the old Convento de las Brigidas. Bishop Jose Cadena Eleta was the person who organized the building of the new church. The church has the Latin cross plan with five naves and an ambulatory. The church measures 118 meters long by 48 meters wide. The height is 35 meters. The church is the second largest church in Spain, the largest being the Cathedral of Seville. It is also the last Cathedral constructed in the country. The church has very large stained glass windows by the famous French firm Maumejean. The church contains the Diocesan Museum of Sacred Art. 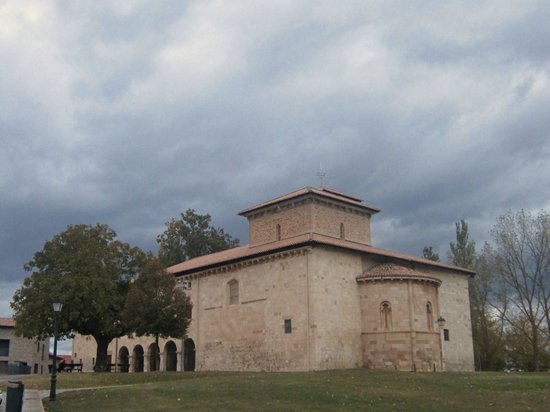 This church was the first Cathedral in Alava. In recent restoration works it has been found that it has an old sacred history (prior to the Christian times in the region) 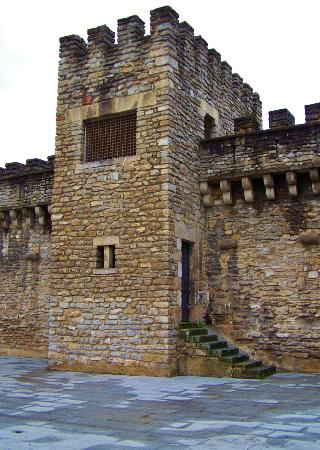 We decided to walk up to the church on the hill as we were on the plaza and what a find! The ancient fortifications have been restored to give travellers an idea of how the city must have been defended in the 11th century with the narrow openings for cannon and a sweeping view of the surrounding countryside.
People's houses co-exist with the historical remnants and it was amusing and gratifying to see how the old can still be admired while modern families wheel their children and the day's purchases along the steep travel laters that get the up and down the hill. Colourful murals blaze on the sides of houses amidst grocery and provision stores while ancient courtyards, wells and gates can still be glimpsed.
It was particularly enjoyable to sit on the benches under the well-tended trees and take in the tranquil but colourful neighbourhood. 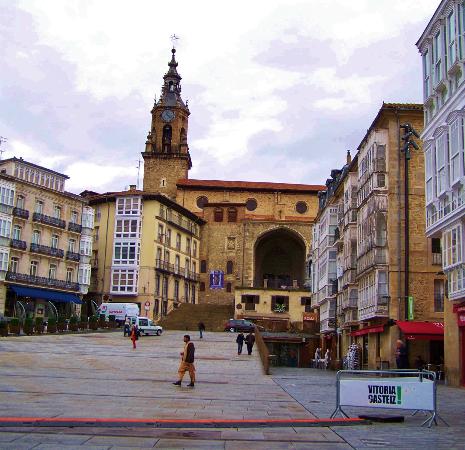 San Miguel Archangel Church is located at the Plaza Virgen Blanca, s/n. The church was built between the 14th and 16th centuries in the Gothic-Renaissance style over a Romanesque church.
The ground plan is rectangular with three naves, and eight sided apse. The left side of the church
has three chapels, while the right side has four chapels. The main doorway has a portico. The main altarpiece is a wonderful Baroque piece that was created by the artist Gregorio Fernandez between 1624 and 1632. It is presided by the image of La Purisima (the Virgin Mary). A side chapel has the image of the Virgen Blanca (the White Madonna), the patron saint of the city. The sculpture was created in the middle of the 19th century and was sculpted in poplar and per wood. The church was declared a National Historic-Artistic Monument in 1995. 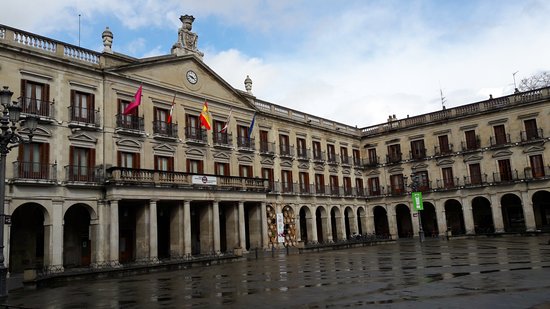 On Saturday in March it was empty and not particularly welcoming. From other reviews seems that Sunday is a much better day to come there. We left with a impression that it's like many other city squares in Spain - surrounded by the arched passageways.