Schwäbisch Gmünd (German pronunciation: [ˈʃvɛːbɪʃ ˈɡmʏnt], until 1934: Gmünd) is a town in the eastern part of the German state of Baden-Württemberg. With a population of around 60,000, the town is the second largest in the Ostalb district and the whole East Württemberg region after Aalen. The town is a Große Kreisstadt since 1956, i.e. a chief town under district administration; it was the administrative capital of its own rural district until the local government reorganisation on 1 January 1973.
Restaurants in Schwaebisch Gmuend 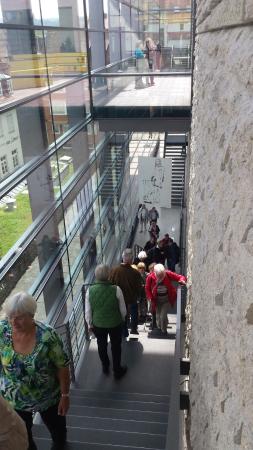 Located "across" town is the Wurth Museum. This museum charges no admission and does offer quite an art collection offered by the Wurth Family. Albeit only a portion of their collection is displayed here it does take some time to go through and enjoy the various themes offered. I would plan on two hours, longer if you want to peruse the museum shop or enjoy a snack in the cafe. The exhibit we viewed was Water, Clouds and Wind which I believe runs through September 2017. Please know that this is only a portion of over 17,000 pieces in the Wurth Collection in various museums located throughout Europe. The museum itself boasts some interesting architecture, but please note all artwork in sculpture in this museum was in Deutsch with no English translation; although we were fine walking through despite that fact. 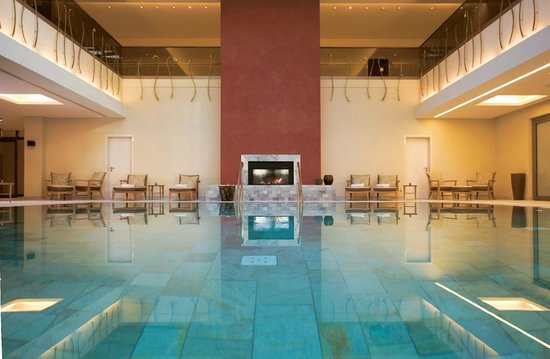 Endless walks, rejuvenating massages and relaxing baths make the Spa a refuge for you and your needs. On 4400 sqm you find peace, energy and luxury. Our functional and luxurious furnishings are inspired by nature and contribute to a unique atmosphere for your enjoyment. Our Spa has room for 80 to 100 guests on three levels. It offers a heated indoor and outdoor pool, a specious sauna area with a seperate ladies only sauna, a gym and fitness centre, 13 treatment and 3 relaxation rooms and a private Spa-suite. We also provice our own skin care line SanVino, which is made of regional grape-seeds and essences of regional wine.

Everything was perfect. The staff was super-friendly, the breakfast superb and spa/wellness very luxurious. Absolutely recommendable for romantic trip.Dear Carlos R, Thank you so much for your wonderful comment. It was a pleasure having you with us and we hope to see you again. For now, we are wishing you and your fiancée a wonderful new year. Your Wald & Schlosshotel Friedrichsruhe 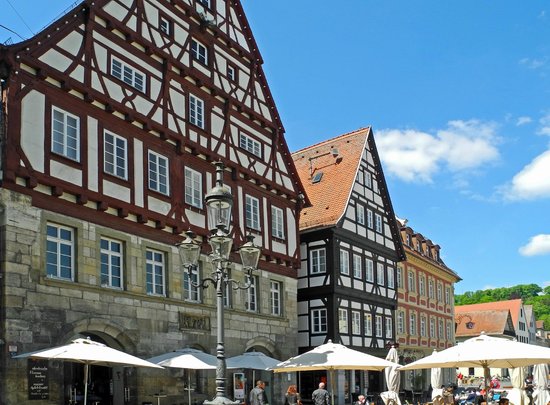 The sun was shining, the marketplatz was busy and there were many smiles around. The historic buildings were magnificent with many other tourists making the most of photo opportunities. It is a pleasant walking around the Marktplatz and within easy reach are many shops, coffee bars, restaurents and places of interest. Well worth a visit. 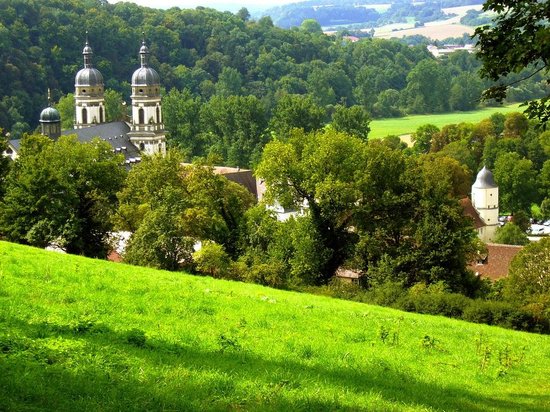 We were staying for a wedding 5 mins down the road and nipped here in the morning.
We were amazed at how picturesque the village was. The Abbey dominates of course with most of the buildings within its walls.
The interior is really beautiful and the exterior is well maintained. Definitely worth a visit if staying nearby. 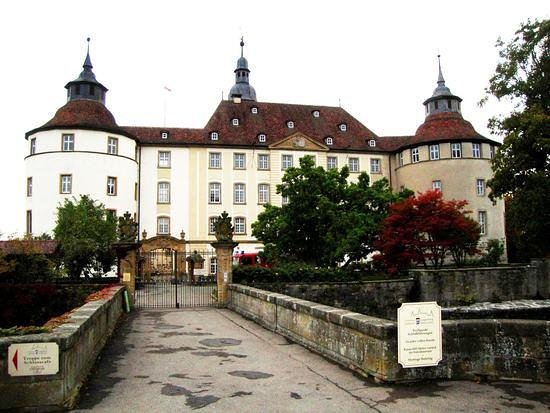 Fascinating. The place, the castle and the adjacent restaurant.
The history revealed on the tour, the relationships and family connections with our UK Royals. The similarity of the aristocracy wherever they are are plain to see. But now we are welcomed and can enjoy the view, marvel at the delightful chapel in the keep with scenes and words from old and new testment in the circular galleries. We went having been invited for a wedding and what a perfect 'chcolate box' setting . It also makes you think what other sights are out there yet to see. But that's the beauty of this very site isn't it 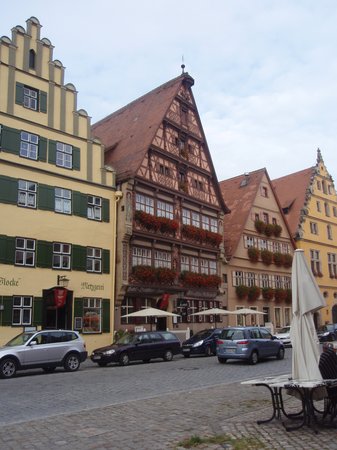 This walled village houses mercantile buildings dating from the 15th and 16th centuries. The fortified wall has sixteen towers; you can access the city from four of them.

Drove the Romantic Road in August. This was one of our favourite villages of the trip. Straight out of a Grimm's Fairy Tale. Cobblestone streets, friendly folks and a very peaceful atmosphere. The houses and businesses are rendered in late Renaissance facades with pastel colours and half-timbered frames. So photographic and charming.
We parked on the outer ring and walked into the town through one of the four medieval gates that remain . This town has a history! Probably starting around the 8th century. It was once a "Free Imperial City" of the Holy Roman Empire. In the 13th century the fortifications began. Luckily this town is original, untouched by WWI or WWII bombings. Forward thinking in the 19th century, by Ludwig I proclaimed the city to be a heritage site to be preserved and protected.
Delightful shops, bakeries, cafes, inns, restaurants and churches. Well worth an afternoon of roaming around. Highly recommend saving time to walk the fortification walls or at the least climb the St. George church tower. Delightful! 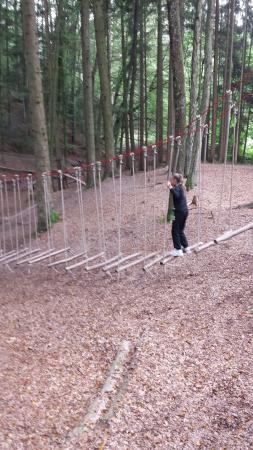 This is the best and the most beautiful park I have ever been. I was there with my German friend and kids for several hours. We would have stayed even the whole day if we had had time.It is a park for adults and children of all age.
It is a park where the art, poetry and nature is mixed to each other. There are so many things to do and to see. You can never get bored there.
We also had some nice lunch in a restaurant where there are some disabled people are working. It was fantastic. They have also some closed areas where you can do many things. They have also a very nice gift shop.
The only thing is that if it's a rainy day, it may not be very much fun. It is better on a dry day. Make sure you dress well. between the trees it is a bit humid and fresh,
I also liked the way they trust people. We could have entered without making the tickets for the entrance as the ticket office is in the middle and the park is open completely. You don't see a real entrance. But it is impossible not to buy your tickets if you are an honest person and want to have this beauty longer. They have also family ticket.
I have to go there again when I go back to visit my friends in Germany. 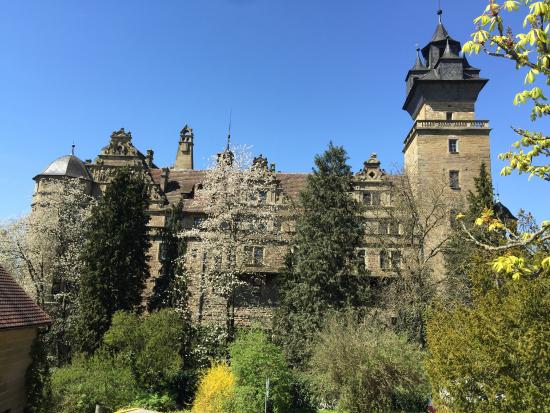 We were there last weekend with 16 friends, and all of us have visited other Castles in Germany and beyond. We were all suitably impressed with not only the house and grounds, but also the collection of artifacts. It is memorable and worth both time and money for this visit. If you are in the area, you GOTTA visit this one! 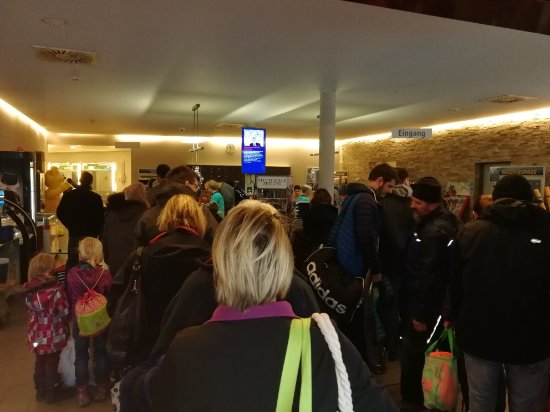 Great swimming pool. Very good for kids. Clean and well designed. Really good. One from the best in Germany. BUT!!! Stay away from their restaurant - they prepare hamburgers without plastic gloves. I mentioned that but the girl said : "We wash our hands! And if you do not like it, you do not have to eat here! "And immediately touched her t-shirt with both hands. I order just bottle of beer.So be sure that you will get food with full germs from the restaurant crew. Disgusting.... 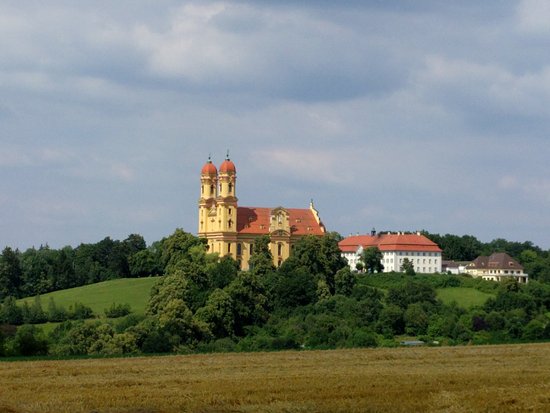