Top 10 Things to do in Lockport, United States

Lockport is a city in Will County, Illinois, United States, located 30 miles southwest of Chicago. The city was incorporated in 1853. It is situated along the Illinois and Michigan (I&M) Canal, and was the headquarters of the canal when the canal was operating. A section of the canal runs through Lockport, including the remains of the canal's Lock No. 1 from which the town received its name. The canal right-of-way is now the Illinois and Michigan National Heritage Corridor. Because of proactive efforts dating back several years, the city of Lockport is one of the best-preserved canal sites in existence today.
Restaurants in Lockport

The Gaylord Building played a vital role in one of the great enterprises of the 19th century: the Illinois & Michigan Canal. A landmark since 1838, its many tenants and uses exemplify the canal’s commercial success as the key to mastery of the American mid-continent. This handsome limestone warehouse originally stored canal construction materials and later housed a variety of commercial ventures. Today it serves as a national example of adaptive re-use and is a gateway to the Illinois & Michigan Canal National Heritage Corridor. Visitors will discover in the exhibition galleries the unique heritage of the site and the corridor. The Gaylord Building is a historic site of the National Trust for Historic Preservation.

The Gaylord Building, which was built in 1838 in what is now known as Lockport's historical district, played a pivotal role in the construction of the Illinois and Michigan Canal. It is on the National Register of Historic Places and is listed among the 29 Historic Sites of the National Trust for Historic Preservation. Constructed of yellow limestone, it had an Italianate three-story addition added in 1959. Located at 200 West 8th Street, it stands by the I&M Canal, which began in 1836 and was completed in 1848 and spans 96 miles. It was the last link in a waterway connecting the Great Lakes, the Gulf of Mexico via New Orleans and the Atlantic Ocean via New York City. Lockport is situated about 1/3 of the way from the starting point in Chicago's Bridgeport neighborhood on the Chicago River and the end point at La Salle on the Illinois River. Hence, it was a natural location for canal planning, staging and warehousing operations. In fact, the I&M canal headquarters were in Lockport. Today, the Gaylord Building is a hub of canal exhibits, tours and programs. The canal trail runs past the building along the old canal towpath. In addition, the Public Landing restaurant is a popular gathering spot for locals and tourists. History buffs also will be interested to walk south of the Gaylord Building, to the west end of West 8th Street, behind the Will County Historical Society's building, across the railroad tracks, to one of the newest historical attractions in the state. It is the Lincoln Landing, dedicated in 2009, a memorial park that pays tribute to the spot where a young Abraham Lincoln once beached a flatboat. In Illinois, it seems, the hand of Lincoln is everywhere. 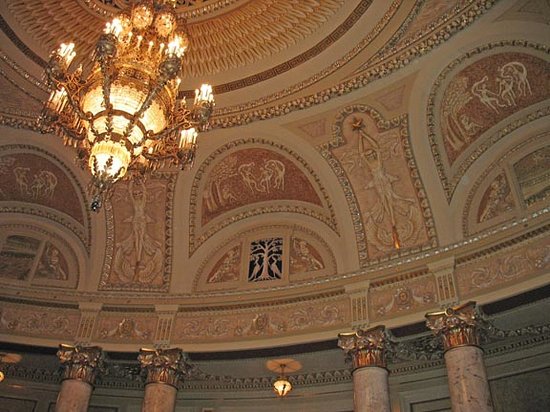 Went to a couple of concerts in Feb. The Rialto remains a great place to attend a concert or probably anything. Beautiful setting, the performers express their high regards to the venue every time. It is good to see the recent good shows being scheduled here lately. We had a long drought there for awhile. Keep the good shows coming and people will attend. Everybody working there is friendly and helpful. Never a bad experience here. 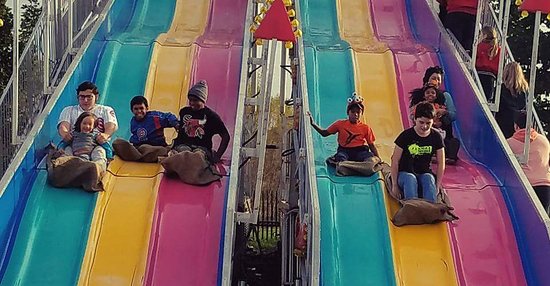 Bengtson Pumpkin Farm is the premier fall festival and Pumpkin Patch in the Chicagoland area. Established in 1980 the Bengtson family was selling their pumpkin crop to the public from the family farm. Over the past 37 years the farm has come to include one of a kind attractions that have families returning year after year. Our farm has food options that are most easily described as award winning, not your typical festival food. Unlike many other farms and festivals these days Bengtson's admission includes unlimited access to all the rides and activities. One low price for an entire day of fun. There are many options when it comes to pumpkin patches but Bengtson's is the only choice. Our farm is the highest rated and most reviewed farm you will find. The largest corn box play area anywhere, the all new Cow Spin Coaster, all paved walkways so even the newest members of the family can enjoy the farm from the stroller. Bengtson Pumpkin Farm is an experience like no other.

This place is one stop if you have children and need pumpkins. They had carnival rides, food, music, hayrides, even pig races. My grandson loved this corn pit, its like a big sandbox only filling with corn kernels. He was doing cannonballs and snow angels. They could use more changing stations for babies, but it’s all outside so just wing it. On the way out we got some donuts, pumpkins and kettle corn. Fun for the whole family. Weekend are crowded, just a FYI. 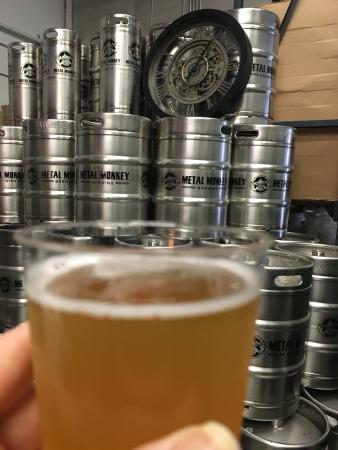 Great space. Great beer. Nice people. Fun merch. Metal Monkey seems to understand what it is all about. Visited many local breweries on a recent trip and this was the best. 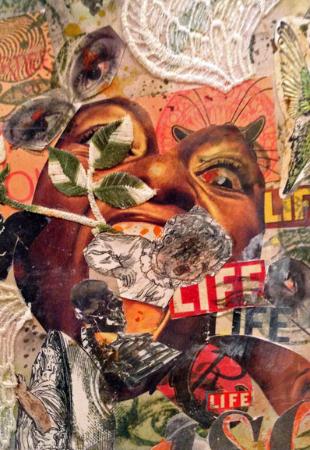 Explore the art and visual culture of the state of Illinois at the Illinois State Museum Lockport Gallery! Part of the Illinois State Museum system, this branch site opened its doors on May 3, 1987, and features changing exhibitions of art created by past and present Illinois artists. Located on the first floor of the historic Norton Building-a massive limestone structure built around 1850 as a grain-processing center on the Illinois & Michigan Canal-the museum offers visitors of all ages opportunities to discover and reflect in spacious, light-filled galleries that unite the past and present. Group tours and specially planned events provide added dimension to the rotating display of paintings, drawings, sculptures, textiles, works on paper, and multi-media installations, as well as decorative, archeological and ethnographic objects. The Illinois State Museum Lockport Gallery is located in downtown Lockport, Illinois, the heart of the Illinois & Michigan Canal National Heritage Corridor. Lockport is 35 miles southwest of the Chicago Loop at the crossroads of Illinois Routes 7 & 171. Free parking is directly in front of the building and dining, shopping, a recreational trail and a nature preserve are just steps away. Admission is FREE. Hours: Monday thru Friday, 9 am - 5 pm; Sunday, noon - 5 pm. Closed Saturdays and State holidays, and during exhibition changes. Wheelchair accessible. --- On display through September 18, 2015: "Focus 4: Four Solo Exhibitions" featuring the work of Barbara Aubin, Guy Benson, Julia Haw and Thom Whalen. "Focus 4" is an ongoing program that highlights work of contemporary accomplished artists in four separate exhibitions. The artists are selected by four fine arts curators from various sites of the state-wide Illinois State Museum system.

Here is a delightful small museum space with professionally curated rotating shows and free admission. How are people not all over this? We were the only people there. They need a press agent to toot their own horn! 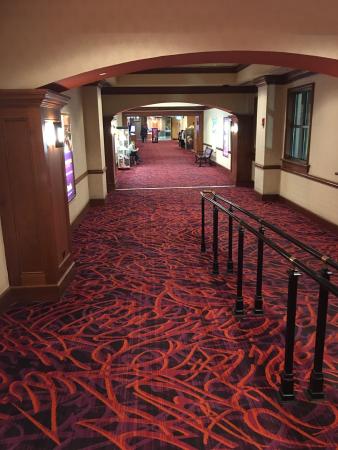 In the heart of historic downtown Joliet, Harrah's Casino offers food and fun in the Chicagoland area! We have all your favorite Slot Machines and Table Games in an exciting yet relaxing atmosphere!

Use to come here very frequently (twice a week) but have since stopped going when they are giving $5 comps and Hollywood is giving me $20. This really use to be my go to place, and I used to have really high regard for Harrahs....MoreThanks for the review. We have been adding new machines to the floor over the last few months and continue to plan to add more. We hope you find our selection better! 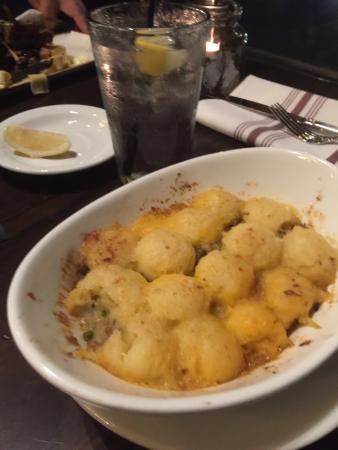 Was just passing by and noticed the big shiny new restaurant has opened. My wife and I were very pleased with the ambiance and food. They are also planning on having outdoor concerts weekly over the summer months on their outdoor patio. Should make for some fun nights!

We would like to thank all our Wine Friends for 10 Years of great times at the WA. We are sure we will continue to share a glass of wine with all of you in the future. Cheers Sandy and Scott Guzik

Seriously wish we could award ZERO stars to William Alexander. Hoping to save others from this DIVE pretending to be something it's not with this honest review. We're compelled to share our comments to prevent others from being fooled as were we by other glowing (inaccurate) reviews (Yelp). Our experience was terrible, from start to finish, in every way imaginable. We all felt like we'd just been slapped in the face when our check arrived. Way too expensive for such limited selections, dim decor and offensive service. Would never recommend this place to anyone. The "ambiance" is dark but not in a romantic kind of way. Rather dimly lit to hide layers of dust and dirt and crawlers! The wait staff and bartender were sneering and short with us for no apparent reason. Definitely NO warm fuzzies here... The "decor" is literally junk which litters the entire place. The "live music" was actually annoying and plain bad. The "food" was microwaved fast food. Our mixed drinks were obviously watered down. The "fresh cheese & fruit plate" we got looked like it had already been picked over - as in someone else's leftovers - seriously! Another reviewer cited 'chatchkis" which are actually nothing but junk being touted as "antiques" - actually nothing more than musty smelling Junk, and it's everywhere...cobwebs galore. We can't imagine what their dark backroom kitchen must look like. Servers appear with food from a hole-in-the-wall dark hallway. Another (probably paid or related) reviewer cited this joint as a "hidden gem" - only if you're blind, or dead, or have lost your sense of smell and taste, or just don't get out much. Life is short and money is precious these days. Our group looks for and appreciates "quality" everywhere we go - it's a habit worth practicing and receiving and which we take pleasure in paying for. If you're seeking a fun, quality evening, you'd be wise to take your business elsewhere. There is nothing here worth experiencing or paying for. Plenty of far better places in Lockport, which is a great town to visit.
You've been warned: Go Elsewhere! 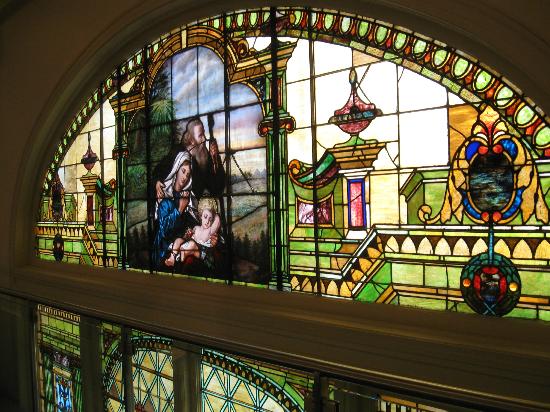 Love this little museum. Very friendly volunteers who are keen to tell you whatever you want to know. Easy to get around. Price is great value 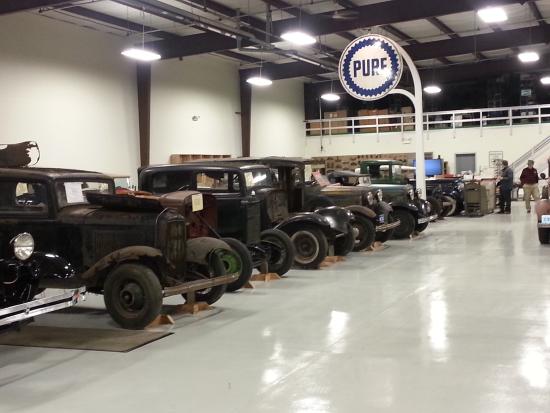 A very non-descript warehouse of about 75 vehicles in various stages of restoration. Interesting history as to how the owner acquired all these vehicles, spare parts, and advertising documentation and trade hournals. A MUST-SEE if you are a car person or into Model A's. A good collection to see how adaptive the Model A was for various roles from cars to truck platforms.