Top 10 Things to do in Letterkenny, Ireland

Letterkenny (Irish: Leitir Ceanainn, meaning "hillside of the O'Cannons"), nicknamed "the Cathedral Town", is the largest and most populous town in County Donegal, Ireland. It lies on the River Swilly in east Donegal and has a population of 19,274. Along with the nearby city of Derry, Letterkenny is considered a regional economic gateway. Letterkenny acts as an urban gateway to the Tír Chonaill Gaeltacht, similar to Galway's relationship to the Connemara Gaeltacht.
Restaurants in Letterkenny Much of the area surrounding Mount regal includes impressive natural structure. Once or twice, one might erroneously wonder, "Oh is this or that Errigal?" until engaging the mother lode leaves no room for uncertainty. And that's another issue. It's so often capped in clouds of fog for a bit. In such a posture, it's difficult to get a more distinct impression, reminiscent of the B&W Dracula, first Speilberg Jaws flick or Musical Comedy Brigadoon.
After awhile, a clear vista breaks out from top to bottom, with surrounding landscapes rivaling for some of the attention as well. 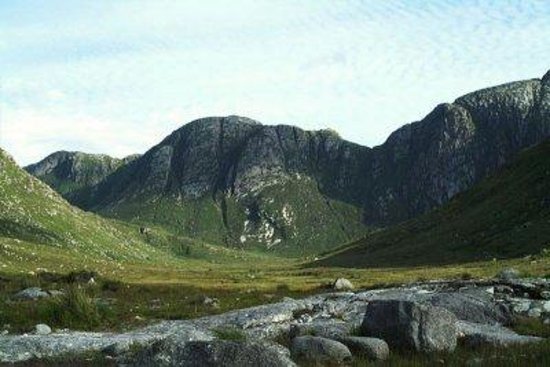 If you have a little time, the Poison Glen is well worth seeking out. Lucky for us, one of the rangers at Glenveagh NP provided excellent road directions - as we would never have found if we had relied on the road signs. There is a fairly rough walking track of maybe 1.5 km that takes you up to the Glen. It is very quiet, very stark, and - as long as you like your landscape stark - very beautiful. 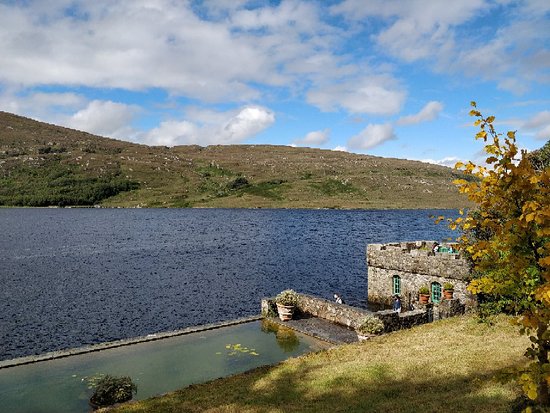 Even on a cold wet windy day the area surrounding Glenveagh castle is spectacular. The views of the Mountains are really stunning. The car park and visitor centre is roughly 3 miles away from the castle but there is a bus which is handy if you don’t want to walk all that way. The castle itself is beautiful from the outside. We didn’t get a chance to explore instead but we were told it is worth getting a tour. The surrounding Gardens are all beautiful. Each garden has a different theme. Some lovely statues and unusual trees and plants to discover. There’s also some great hikes around the property that are well worth doing to see more of the mounting and lake. 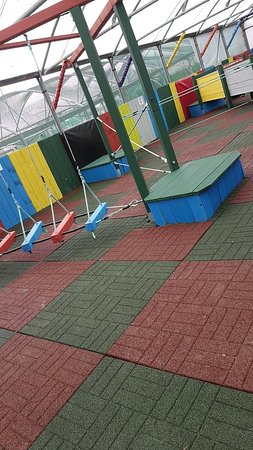 Tropical World at Alcorn’s, Letterkenny, has best be described by patrons as both “Donegal’s hidden gem” and the “one must see attraction to visit in Donegal”. Tropical World is a fully licensed zoo with an astonishing array of animals, from a dazzling display of butterflies to the world’s smallest monkeys alike. The incredible butterfly house is still the star attraction, with hundreds of amazing tropical butterflies of all shapes and sizes, all in free-flight around you as you immerse yourself in the atmosphere of the rainforest. As you leave Letterkenny’s own slice of the Amazon, you’re greeted by the sounds from the tree topped canopies, with beautiful birds of all shapes and sizes from around the globe calling you on. Only after you reach the reptile house can you begin to meet the lemurs and miniature primates that call Tropical World home, along with the raccoons, owls, wallabies, prairie dogs and everyone’s favourite, our family of Meerkats. The overwhelming feeling you get while walking around, is happiness. This is coming from both animals and the visitors, with squawks from the animals and cheers from children in equal measure. Tropical World is open 7 days a week and 70% is under cover, so a great day out is guaranteed, whatever the weather! Amenities include: Full wheelchair accessibility, baby changing facilities, gift shop, picnic area, on-site cafe and to tire the kids out, the fabulous (and fully covered) Monkey Swing Indoor Play Area

I go there regularly during the summer months, its a fantastic place, loads of great animals to see, the butterflies are fantastic and the play area being roofed is a great addition, the only thing I find is that we usually only go 1 Adult at a time with our child as we find it too expensive for us both to go ! I think 1 charge for "Parents" and individual charges for children would be good as the parents are only there to take their child and watch them enjoy themselves, and it would be nice for both Parents to be their to see the excitement on their face, especially when you want to go their a few times a month, Other than that its a beautiful addition to Letterkenny. 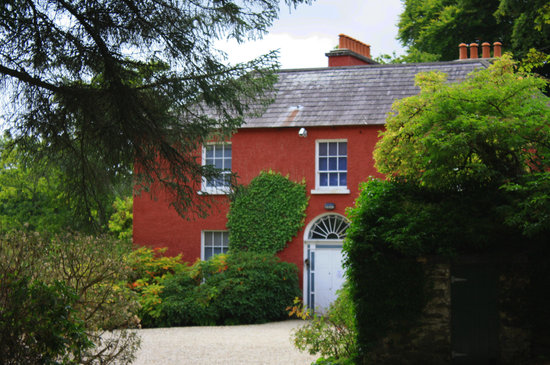 We had planned to visit 'Glebe House' before visiting Tory Island, however, weather conditions forced us to visit Tory Island before 'Glebe House'. Derek Hill (owner of Glebe House) was a painter and loved painting in Tory Island. You can see the hut he inhabited on Tory Island! Haha he asked John Dixon (a local fisherman on Tory, if he liked his painting, to which John Dixon replied "I could do better myself". Derek Hill gave him paper and paint and John Dixon painted a 'masterpiece'. On view in 'Glebe House'. This style of painting is 'naif' (pronounced naïve). ie. Tory Islanders who can paint beautifully, without art college training! Derek Hill was an eccentric, displaying Michelanglo beside awfully kitch pieces. It is now managed by the O.W.P. The house was left in the condition Derek Hill left it, before donating to the State. Well worth a visit. Please go here before Glenveagh Castle. 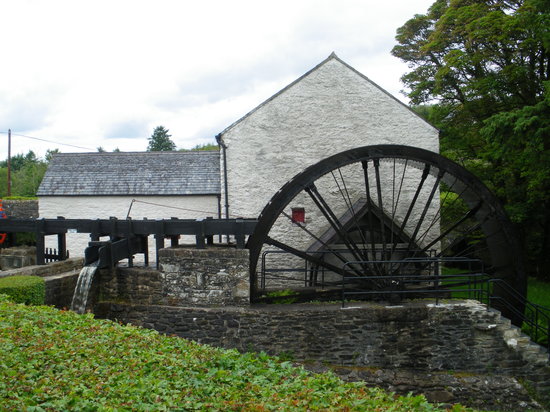 Very interesting and informative FREE tour in an old flax mill now turned into a museum. You understand the importance of the flax growing and linen industry in old days in Ireland, the tough work it required, and its decline when artificial fabrics were invented. 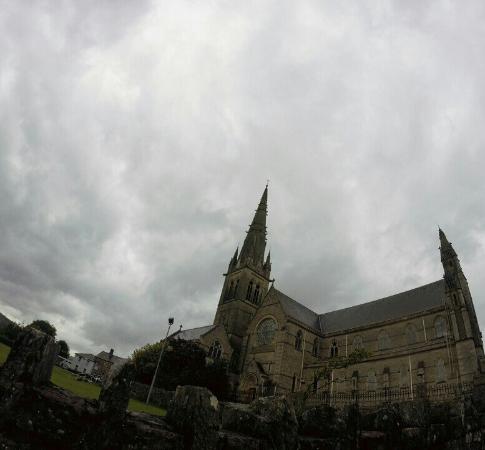 The Cathedral looks older than it is only having been built in about 1900. The exterior is impressive and dominates the town from its elevated position but is only a short uphill walk from the Main Street. Inside, the stained glass windows are deeply impressive. Weirdly, I misread the word Erexit (I think that means build or erect in Latin) in one of them, to mean a current thorny topic in the UK! 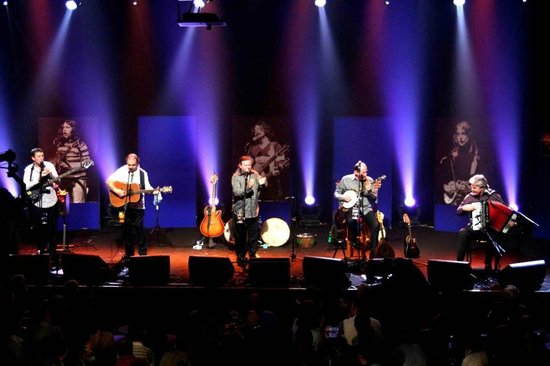 An Grianan theatre is home to a lovely and comfortable 400 seat auditorium and its welcoming staff. It has a programme of events all year with Drama, Music, Comedy, Talks, and Dance. There's also a lovely cafe open on week days.

A first class theatre in a small town competing with other local or semi local theatres deserves respect. It's a place that locals are proud of. 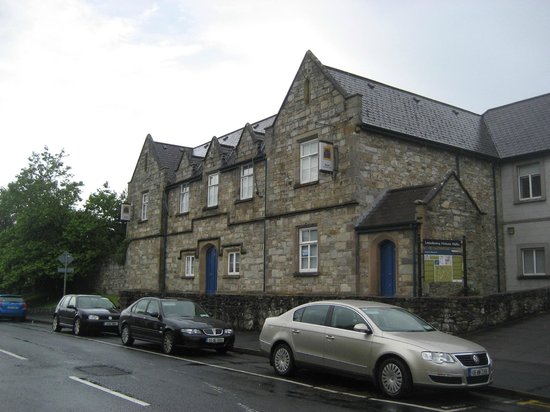 We were made to feel very welcome by the lady at reception who explained the layout and the Exhibitions.
The Museum may be small but each exhibition contained plenty of information, both written and visual.
Lots of interesting things to look at, display cases packed with treasures
The exhibition upstairs was varied and extremely interesting. 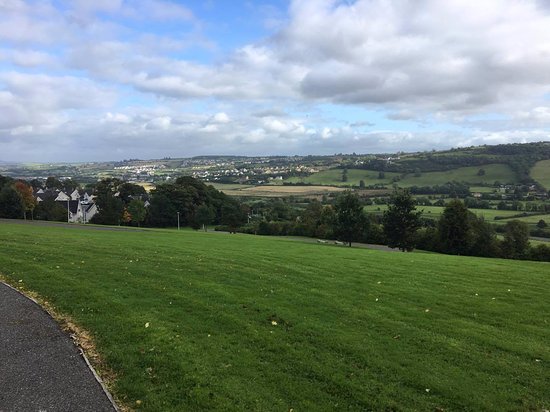 Ballymacool park is a pleasant park that I find perfect for walking my dog. When you get to the top of the you have lovely views and along the way you can read lots of interesting historic information posts.
Within the park there is a kids play park and a recreational football/basketball area to play in. A number of Picnic tables can also be found in the park. Perfect for an evening stroll.